Conclusions: There is an increasing trend toward SLNB in the treatment of patients with node-negative early-stage vulvar SCC, and survival is comparable between lymphadenectomy and SLNB.

Vulvar cancer is a rare gynecologic malignancy, accounting for approximately 3-5% of all gynecologic malignancies. Squamous cell carcinoma (SCC) contributes approximately 85-90% of all vulvar cancers (1,2). The incidence of vulvar cancer has increased in the last decade, probably due to a rise in human papilloma virus infection and lichen sclerosus, and prolonged human life expectancy, with peak incidence in the seventh decade of life (1,3-5). The presence of lymph node involvement is the most important prognostic factor in vulvar SCC (1,6,7). Five-year survival rates were approximately 70-98% in node-negative patients, while only 12-41% for those with lymph node metastasis (7).

Although several studies have found a low groin recurrence rate in patients undergoing SLNB (17-20), no randomized controlled trials have compared the effect of lymphadenectomy with SLNB on outcomes in vulvar SCC, because of the rarity of the disease. In this study, we used a population-based cancer registry (Surveillance, Epidemiology, and End Results, SEER) to compare trends and outcomes between lymphadenectomy and SLNB in node-negative early-stage vulvar SCC.

The SEER program, a database maintained by the National Cancer Institute, includes demographics, incidence, and cancer-specific survival data for approximately 28% of the United States population (21). Our study included patients with vulvar cancer registered on the database between 2003 and 2013. Patients who met the following criteria were included: 1) histologically confirmed vulvar SCC; 2) American Joint Committee on Cancer 6th edition tumor stage (T-stage) T1-2 with tumor size <4 cm; 3) node-negative disease who received lymphadenectomy or SLNB; 4) no preoperative or postoperative radiotherapy; 5) the availability of variables including age, race/ethnicity, grade, marital status, and the number of removed lymph nodes.

The following variables were collected from the SEER database: year of diagnosis, age, race/ethnicity, marital status, grade, T-stage, tumor size, and type of lymph node management. The primary survival outcomes of the study were cause-specific survival (CSS) and overall survival (OS). CSS was calculated as time from initial diagnosis to the date of death due to vulvar cancer. OS was calculated as the time between initial diagnosis and the date of death or last follow-up.

A total of 1475 patients who met the inclusion criteria were identified, with a median age of 65 years (range 23-101 years). The patient demographics and clinicopathologic characteristics are listed in Table 1. Of the 1475 patients, 1346 (91.3%) received lymphadenectomy and 129 (8.7%) underwent SLNB. The median number of lymph nodes removed in patients who underwent lymphadenectomy and SLNB was 9 (range 1-44), and 2 (range 1-11), respectively. The percentage of patients who received SLNB was significant increase between 2008 and 2013 compared with the years 2003-2007 (13.9% vs. 3.7%, p < 0.001) (Figure 1). Patients with stage T1 disease were more likely to have undergone SLNB (p = 0.002). There were no significant differences in age, race/ethnicity, and marital status between the two lymph node procedures. 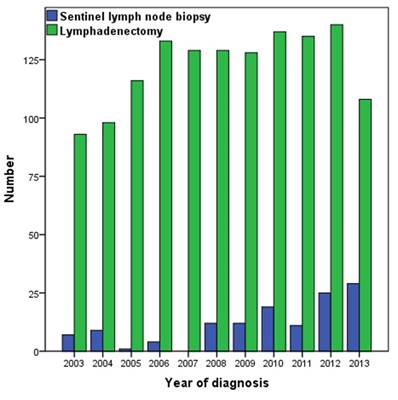 Characteristics of 115 matched pairs of patients

In this study, we assessed the trends and outcomes of SLNB in patients with early-stage node-negative vulvar SCC, and our results showed an increasing trend toward SLNB, and survival outcomes were comparable between patients undergoing lymphadenectomy and SLNB in unmatched and matched populations.

The overall incidence of vulvar cancer increases with age, and our population-based study confirmed a median patient age of 65 years. Therefore, it is more important to investigate optimal treatment schedule to reduce the treatment-related complications and improve the QoL for this group of patients. Systemic inguinofemoral lymphadenectomy is considered the standard surgical procedure in patients with invasive vulvar SCC with >1 mm invasion. However, complete inguinofemoral lymphadenectomy may lead to a higher rate of complications, including wound breakdown (20-40%) and lymphedema (30-70%) (24). Moreover, less than one-third of patients have inguinofemoral lymph node involvement, meaning routine inguinofemoral lymph node dissection exposes a large number of patients to potentially avoidable surgical complications (25). Currently, lymphatic mapping and subsequent SLNB is the standard procedure in early-stage breast cancer and melanoma (8,9). Our results were similar to the previous study that the average number of removed lymph nodes was 9-10 for lymphadenectomy and 2-3 for SLNB (26), suggesting the extent of lymphadenectomy or SLNB in our population-based study was representative.

A population‑based analysis from Germany by Rottmann et al. (27) found an increase in the proportion of patients with vulvar SCC undergoing SLNB, from 11.4% to 39.1% in the last two decades. A study from the United States by Cham et al. (17) also found that the proportion of vulvar cancer patients undergoing SLNB increased from 17.0% in 2006 to 39.1% in 2015. Groin recurrence and survival were not affected by these changes and were likely accompanied by an improvement in QoL (27). However, in our study, prior to 2008 only 3.7% of vulvar SCC patients underwent SLNB, and although the proportion of patients receiving SLNB increased to 13.9% after 2008, it was still lower than the aforementioned two studies. The rate of SLNB increased after 2008 following the publication of the results of the GROINSS-V-I (13). A previous SEER study indicated that only 5.1% of patients received SLNB between 2004 and 2008 (28). It is still unclear why there are differences between the SLNB rate in our study and the studies by Rottmann et al.(27) and Cham et al. (17). The differences in the study population may be the main reason contributing to the conflicting results. In addition, the rarity of the disease may limit the potential for individual surgeons to develop the technical skills for SLNB procedure. An expert panel recommended in 2009 that surgeons conduct 10 SLNB procedures followed by complete lymphadenectomy to confirm SLNB findings before conducting SLNB alone for appropriately selected patients (29). Therefore, for gynecologic oncologists who rarely see patients with vulvar cancer, it is appropriate to refer patients to a high-volume center or surgeon. SLNB should still be considered as an experimental approach that should not be routinely performed by gynecologic oncologists outside referral centers.

Survival comparison (A, cause-specific survival; B, overall survival) in patients with vulvar squamous cell carcinoma based on the type of lymph node management before propensity score matching.

Survival comparison (A, cause-specific survival; B, overall survival) in patients with vulvar squamous cell carcinoma based on the type of lymph node management after propensity score matching.

There have been no randomized trials to compare the effect on outcomes between lymphadenectomy and SLNB in vulvar SCC due to the rarity of the disease. The results of GROINSS-V-I and GOG-173 trials showed that SLNB in vulvar cancer had a high sensitivity (92-94%) for the identification of SLN metastases and a low false-negative predictive value (2.0-2.9%) in a selected group of patients (13,14). Several studies have found that SLNB is the most cost-effective treatment strategy for management of early-stage vulvar cancer because of lower costs of primary treatment, lower risk of treatment-related complications, and better QoL (30-33). However, most of patients would choose complete lymphadenectomy over SLNB due to the fear of cancer recurrence (16). Therefore, more studies are needed to further delineate the application and outcomes of SLNB in vulvar cancer.

Groin recurrence rate was only 2.3% for unifocal vulvar disease in the GROINSS-V-I trial, and the 3-year disease-specific survival rate was 97% (13). After a median follow-up of 105 months, the isolated groin recurrence rate was 2.5% for SLN-negative patients, and the disease-specific survival rate was 91% at 10 years (18). Robison et al. (19) recently reported SLNB results for 69 patients and found groin recurrence was 5.3% in SLN-negative patients. A 20-year analysis of 128 patients by Brammen et al. (20) included 46 patients who received SLNB, and no groin recurrence was observed in these patients. The long-term results of SLNB procedure in patients with node-negative breast cancer was also shown an extremely low rate of axillary recurrence (0.2%) (34). In our study, the SLNB procedure was not associated with an increased risk of all-cause mortality compared with lymphadenectomy. Therefore, the advantages of the SLNB procedure must be disseminated for the benefit of as many patients as possible to decrease morbidity and improve QoL.

Currently, there are corresponding recommendations for patients who are eligible for SLNB. Patients with tumors that are unifocal, less than <4 cm in diameter, and with no evidence of lymph node involvement by preoperative assessment, are eligible for SLNB (35), while patients with multifocal disease, clinically suspicious groin nodes, or a tumor located in the midline are unsuitable (13,14,24). In addition, patients who have undergone preoperative radiotherapy/chemotherapy should probably be excluded because damage to the lymph vessels may affect the SLNB procedure (36).

We need to acknowledge several limitations to our study. First, it will have the inherent bias of any retrospective study. Second, details on the extent of lymphadenectomy, the method of SLN identification procedures, and the patterns of disease recurrence are lacking in the SEER database. In addition, the radiological staging and histopathological ultrastaging are also not included in the SEER database. However, due to the relatively rare incidence of the disease, it is difficult to conduct randomized controlled trials to compare the effect of lymphadenectomy and SLNB on patient survival. The primary strength of our study is that we used population-based data to compare the outcomes of the two types of lymph node management.

In conclusion, our results suggest an increasing trend toward SLNB in patients with node-negative early-stage vulvar SCC, and survival is comparable between patients undergoing lymphadenectomy and SLNB. Considering that most vulvar cancers are in the elderly, SLNB has an important part of the management of these patients to decrease surgery-related complications and improve the QoL. More prospective studies are needed to confirm our results.

23. Austin PC. An Introduction to Propensity Score Methods for Reducing the Effects of Confounding in Observational Studies. Multivariate Behav Res. 2011;46(3):399-424