Results: Totally, 4248 novel lncRNAs were found to be expressed in our samples. And 2192 lncRNAs and 23342 mRNAs were considered to be differentially expressed in NPC. Among the results, 306 lncRNAs and 4599 mRNAs were significantly up-regulated, whereas 204 lncRNAs and 2059 mRNAs were significantly down-regulated, respectively. Moreover, 62 lncRNAs trans-regulated genes were involved in Epstein-Barr virus (EBV) infection pathway in our study. Jun proto-oncogene (JUN), which was related to a cis-regulator lncRNA RP4-794H19.1, was enriched in cancers and involved in Tumor Necrosis Factor (TNF) signaling pathway, might play a key role in NPC.

Conclusion: These findings broadened the lncRNAs landscape of NPC tissues and shed light on the roles of these lncRNAs, which might be conducive to the comprehensive management of NPC.

Globally, about 86,500 cases of nasopharyngeal carcinoma (NPC) were reported in 2012. NPC was a mortal disease prevailing in South-east Asia and North Africa [1]. In China, the standardized mortality rate was 0.78 /105 issued in 2013[2]. NPC arose as a result of its various genetic susceptibility, environmental or random factors and Epstein-Barr virus (EBV) infection[3]. Albeit researchers were at full tilt unraveling the tumorigenesis and the pathways, we seldom knew them yet.

Long non-coding RNAs(lncRNAs) previously were considered as “transcriptional noise”, which accounted for at least 75% of DNA transcripts[4]. Generally speaking, lncRNAs are longer than 200 nucleotides and short of protein-coding capacity, with lacking of open reading frame (ORF)[5, 6]. Encyclopedia of DNA Elements (ENCODE) Project Consortium issued at least 120,000 transcripts that served as lncRNAs in the human genome[7]. Now lncRNAs have been validated that it played a gorgeous role in regulating gene expression at various levels to affect cellular homeostasis, including proliferation, survival, migration and genomic stability[4]. Up-to-date evidences laid bare that the aberrantly expressed lncRNAs always were relative to the development and progression of cancers[8-11]. Given the eagerness to better understand NPC, many researchers took the cutting-edge lncRNAs to the spotlight.

The lncRNAs research in NPC usually resorted to Microarray and lncRNA-protein-based relationship technology [12-16], or at cell level[17]. Microarray was a high-throughput sequencing, but it was limited by countable numbers of lncRNAs, and all the probes were already known, which was the reason for refraining the technology from discovering novel lncRNAs. Despite LncRNA-protein-based relationship technology as RNA Immunoprecipitation (RIP)-chip and RIP-sequencing, its antibody specificity made the research focus on one point. The next-generation deep sequencing took its advantages in discovering massive exiting and novel lncRNAs[18]. Here, we applied the next-generation deep sequencing to provide a comprehensive view for insights into NPC tissues.

The abstraction of total RNAs derived from 20 cases of NPC tissues and 14 cases of normal tissues, using TRIzol (Life Technology, California, USA) according to the guideline protocol. The sample tissues were placed in 2ml RNA-free EP tube that grinded with four 4mm steel balls in TissueLyser LT (QIAGEN, Dusseldorf, Germany). The purity and concentration of RNAs were measured by OD260/280 readings shown on DeNovix DS-11+ (DeNovix, Delaware, USA), which ranging from 1.8-2.2 were kept. RNAs integrity was qualified by standard denaturing agarose gel electrophoresis.

There were 7 cases of NPC tissues and 7 cases of normal tissues for RNA sequencing. Total RNAs were abstracted as previously, strand-specific RNA-seq Libraries were generated with TruSeq® RNA LT Sample Prep Kit v2 (Illumina, CA, USA) following the handbook, subsequently the Ribo-Zero Gold kit (Illumina, CA, USA) was used for the removing of rRNA, and then the fragmentations of RNAs were harvested. RNA fragmentations were used to synthesize double-stranded cDNA with substituting dUTPs for dTTPs in the second strand cDNA synthesis. Next, double-stranded cDNA were added to A-tailed and ligated to adaptors. Finally, PCR amplification was performed to enrich cDNA libraries. PCR products were qualified by Quant-iT™ PicoGreen® dsDNA Assay Kit (Life Technology, MA, USA) for RNA sequencing.

The prediction of novel lncRNAs

Transcripts were aligned with databases, such as the Kyoto Encyclopedia of Genes and Genomes (KEGG), Clusters of Orthologous Groups (COG) and Swissprot Database, then the mapped transcripts (mRNA) were dropped. Subsequently, transcripts annotated in the lncRNA library (Ensemble) were also cast away. The remaining transcripts were inputted into three Coding Potential Calculator soft-wares (PLEX, CNCI and CPAT) to predict coding and non-coding sequences. We kept the 4248 transcripts which overlapped in three calculation methods, serving as novel lncRNAs. CNCI-CPAT, CPAT-PLEK and PLEK-CNCI overlapped numbers were 237, 26 and 401, respectively. Venn Diagram of predicted novel lncRNAs was shown in Figure 1. 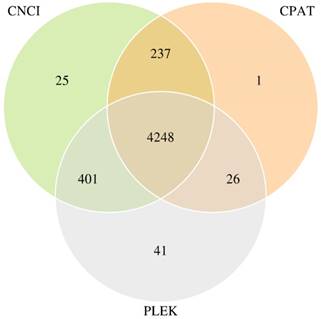 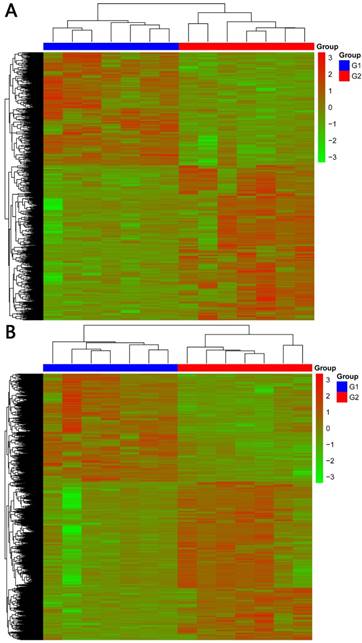 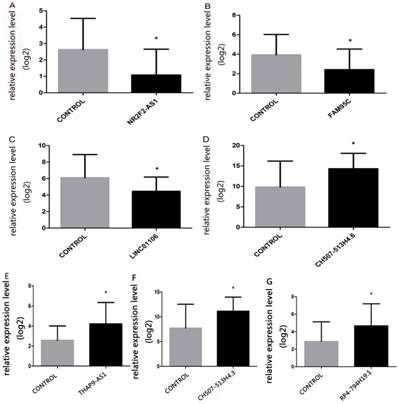 GO enrichment analysis was conducted by TopGO software, and associated with Fisher Exact Test. The results suggested that the significant functions mainly focused on embryonic skeletal system development, embryonic skeletal system morphogenesis, ATP-dependent microtubule motor activity and regulation of gene expression in lncRNAs cis-regulation genes between NPC and normal tissues. As for lncRNAs trans-regulation genes, they laid in intracellular part, intracellular and nuclear part. The detailed results were presented in Figure 6. A and Figure 7. A.

KEGG pathway analysis concluded that the most significant pathways of lncRNAs cis-regulation genes were Proteoglycans in cancer, Vascular smooth muscle contraction and Glutamatergic synapse, while Proteasome, Spliceosome and Huntington's disease were in lncRNAs trans-regulation genes. The rest were demonstrated in Figure 6. B and Figure 7. B.

In 2015, there were sixty thousand new NPC cases reported in China[19]. For NPC patients usually were diagnosed at late stage, and it's a challenge to determine the disease at an early stage. Here, we resorted to the next-generation sequencing technology in 7 cases of NPC tissues and 7 cases of nasopharyngeal normal tissues. 2192 differentially expressed lncRNAs were found, which had the making of potential biomarkers for early-stage diagnosis, progression and prognosis[20]. Moreover, 4248 novel lncRNAs were obtained, and might tremendously enrich the human lncRNA pool.

There was an interesting finding when we mapped differentially expressed lncRNAs to human chromosomes. Y- chromosome had no differentially expressed lncRNAs in NPC and normal tissues(Figure 8), meanwhile, no such studies have been issued. According to demographic trends, men were two to three fold more likely to acquire NPC than women were[1]. Maybe Y- chromosome was short of some suppressor lncRNAs inflicting a higher morbidity compared with women in NPC.

However, only few known lncRNAs had functional annotations. The methods for lncRNAs function prediction always investigated their correlated protein coding genes and related biological pathways[25]. It also had been proved that lncRNAs function through cis-regulation of nearby protein coding genes was a common mechanism[26]. Only a few lncRNAs were refined as cis-regulators, while the majority of functionally annotated ones were trans-regulators[27]. Therefore, we divided the differentially expressed lncRNAs cis-regulation or trans-regulation genes into two categories to explore the potential target genes, GO enrichment and KEGG pathways analysis. 62 lncRNAs trans-regulated genes were involved in the EBV infection pathway in our study (Figure 7B), as CD44[28] and interleukin 1 receptor associated kinase 1(IRAK1)[29] (Table S1). In our work, we defined 100kb distance as a criterion between lncRNAs and cis-regulated genes. Jun proto-oncogene(JUN), which was located 98542b downstream to LncRNA RP4-794H19.1, was enriched in cancers and involve in Tumor Necrosis Factor (TNF) signaling pathway. For example, the expression levels of JUN family members were positively correlated to the cell proliferation in diffuse large B-cell lymphomas[30]. Furthermore, NAG7 through the activity of JUN pathways could promote the invasion in NPC[31]. For good measure, the EBV-encoded EBNA1 regulated the JUN transcription factor pathway in NPC and increased angiogenesis in vitro[32]. Our results underpinned that lncRNA RP4-794H19.1 in relation to JUN might play a key role in NPC. However our work strongly depended on the theoretically computerized calculation, lacking further numerous practice validation. These findings broadened the lncRNAs landscape of NPC and shed light on the roles of these lncRNAs, which might be conducive to the comprehensive management of NPC. 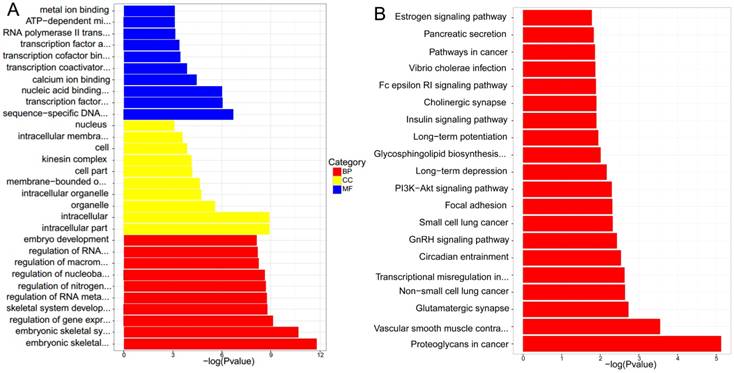 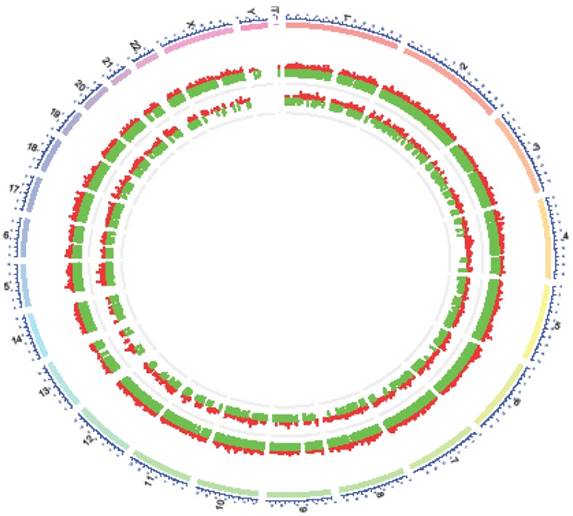