Purpose: This study was performed to examine the regularity and role of p16 methylation in hepatocellular carcinoma (HCC) blood.

Methods: Big data of the case-control studies due to blood p16 methylation detection were collected in English and Chinese Journals. The risk of HCC's histologic process was investigated using both Meta-analysis and the quantitative correlation analysis.

Hepatocellular carcinoma (HCC) is one of the most common solid tumors, and is one of the major causes of cancer death worldwide [1]. The aberrant DNA methylation is the primary mediator of changes in HCC, and may become a promising biomarker for the early diagnosis of cancer diseases [2]. In clinical practice, due to the onset of symptoms, about the 60% of patients with HCC had advanced and surgical treatment of poor prognosis, easy to relapse, the mortality and morbidity of HCC were rapid extension, alpha fetoprotein (AFP) was still recognized diagnosis and screening index, some patients with hepatitis and liver cirrhosis AFP also increased, some advanced HCC patients serum AFP was normal, and the poor sensitivity and specific degree [3]. In order to reduce the mortality and morbidity of HCC, to improve the cure incidence, and to well solve the clinical diagnosis problem of HCC, the early diagnosis played a very pivotal role in clinical practice, due to the cancer cells can release a lot of free DNA in the serum or plasma, through the blood methylation was researched, the early diagnosis target of HCC without damage detection may be helped in clinical practice. Little effort has been spent on the system study of p16 methylation in the blood of HCC's formation and development process. As far as we know, HCC detection still lacked a useful routine biomarker making its early detection easier than it is currently.

HCC is the main pathological type of primary liver cancer, the molecular mechanism of its pathogenesis is still unclear. In recent years, p16 gene 5'abnormal promoter CpG island methylation in many patients with tumor tissue and serum or plasma circulating nucleic acid had a higher detection incidence [1-3]. The studies of molecular biology had found that a lot of susceptibility genes methylations associated with the occurrence and development of HCC, in which the expression of p16 gene inactivation was closely related to the occurrence of HCC, p16 methylation, a cyclin-dependent kinase inhibitor gene that regulated cell cycling, had frequently been detected in human cancers including HCC [4]. Epigenetic changes in gene expression affecting methylation is accepted as the main cause of inactivation of the p16 gene, 5'CpG islands methylation might be the major mechanism of p16 and p15 genes inactivation in primary HCC in the studied population [5]. The detecting methylation of tumor suppressor genes in the serum or plasma is very important for understanding the mechanisms of oncogenesis, with corresponding, HCC pathogenesis may directly response to the methylation changes of p16 gene in blood, for the study of mechanism, yet little is known about the epigenetic relationship between the abnormal methylation in blood and HCC pathogenesis. The present study was discussed in blood that there was a change characteristic through the performance of methylation process, and that HCC pathogenesis played a role in where was the strongest in the process of HCC histology evolution.

We hoped that in near future, the methylation biomarker could be applied to clinical application, how HCC patients at risk size could be diagnosed early, and that the progression of HCC disease could be more correctly assessed. Several studies had shown that p16 methelation of the tumor suppressor gene frequently displays genetic alteration in HCC tissues [6]. The results of some meta-analysis indicated that aberrant DNA methylation was associated with the risk of HCC in tissue. Aberrant DNA methylation might become the useful biomarkers for the prediction and prognostication of HCC in tissue [7], but not in blood samples. No study was performed to examine the gradual changing regularity of p16 methylation in HCC blood. The present study was performed to examine the incidence frequency of p16 methylation in the sera of normal, benign disease and HCC bloods, and to investigate the risk regularity of the gradual changing of p16 methylation in blood, and to evaluate both p16 methylation role and the relationship between p16 methylation epigenetics and HCC pathogenesis. These studies are essential to early identification of HCC and precursor lesions, and to the HCC pathogenesis.

Data extraction was independently conducted using a standardized approach. Data for year of publication and name of first author, geographical populations, the numbers of cases and controls, and incidences of p16 methylation were collected using standard data extraction form. The literature with repeating and poor quality as well as low coverage information could not be used in the systematic literature search. Each published article must be extracted from the data of case-control study in blood, and must be extracted from the normal group, the precancerous lesion group and the liver cancer group data that came from the original article. A total of 14 papers were collected in normal, benign disease and HCC blood (Table 1). The data of three groups in Table 1 were completely determined by the previous articles, three groups were comparatively objective and true.

Both characteristics and data of references in peripheral blood

Odds ratios (ORs) and corresponding 95% CIs were used as the risk measures of the relationship. Both OR > 1 and the interval 95% CIs > 1 indicated a higher risk. When there was no statistically significant heterogeneity (P > 0.05), a pooled effect was calculated with a fixed-effects model; otherwise, a random-effects model was employed. We also assessed the publication bias with funnel plots. In bias drawer file the publication of forest plot was conducted by the formula below:

, yi = InORi, wi stood for weight, Nf stood for fail-safe number and k stood for the number of included studies. The larger the Nf was, especially when Nf was significantly greater than the 5k+10, the better reliability the result in Meta-analysis was, and the less likely the conclusion which was impacted by publication bias was [22]. Meta-analysis was performed by software Rev Man 4.2. If there was a small probability of the event in case-control groups, the Peto OR model of Meta-analysis was taken. In addition, all statistical analyses were conducted with Significant Hypothesis Test (SPSS 15.0 software). Differences at P < 0.05 were considered significant.

As shown in Table 1, based on the methylation of normal blood, a total of 10 eligible studies were included with 460 HCC and 267 normal bloods. Because the incidence probability (approximately equaled frequency) of p16 methylation in normal blood was zero (0/257) in Table 1, and was a small probability event, Prto OR model was took in this meta-analysis. These results were shown with the forest plot Fig.2 (a) and the funnel plots Fig.2 (b). Our results revealed that p16 methylation risk in HCC was significantly increased from normal to HCC though benign disease bloods OR, 95% CI =16.23 (11.66, 22.58) in Fig.2 (a). In Fig.2 (b), because all points in Fig.2 (b) were concentrated above 95% IC area, and were symmetrical, there was clearly no publication bias in Fig.2 (b).

As shown in Table 1, based on the methylation of benign disease blood, a total of 13 eligible studies were included in 557 HCC and 464 benign disease bloods. Because the incidence of p16 methelation of benign disease was obviously the small probability event (42/464), Prto OR model was taken in this meta-analysis. The result of the meta-analysis was shown with the forest plot Fig.3 (a) and the funnel plots Fig.3 (b). Compared the benign diseases with HCC patients matched in blood, the methylation risk of p16 in HCC blood was found with OR, 95% CI =10.06 (7.64, 13.21) in Fig.3 (a). In Fig.3 (b), because the three points in Fig.3 (b) were beyond 95% IC area, the publication bias of Fig.3 (b) in bias drawer file was conducted by the formula (1).

(fail-safe number ) was calculated by us, and it was 2247.67, it was significantly greater than the 5k+10 (75), the conclusion which was impacted by publication bias was reliability in Fig.(a) and Fig.3 (b).

(a) Forest plot between normal control and benign disease risk in blood Fig.1 (b) Funnel plot of corresponding figure 1 (a) 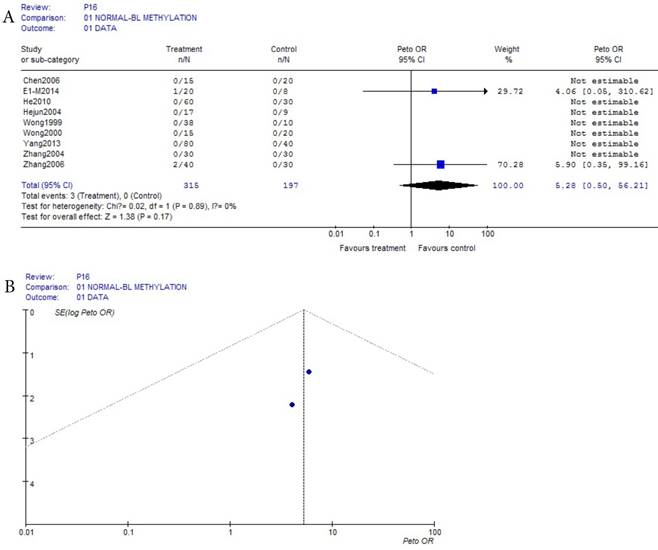 (a) Forest plot between normal control and HCC risk in blood Fig.2 (b) Funnel plot of corresponding figure 2 (a) 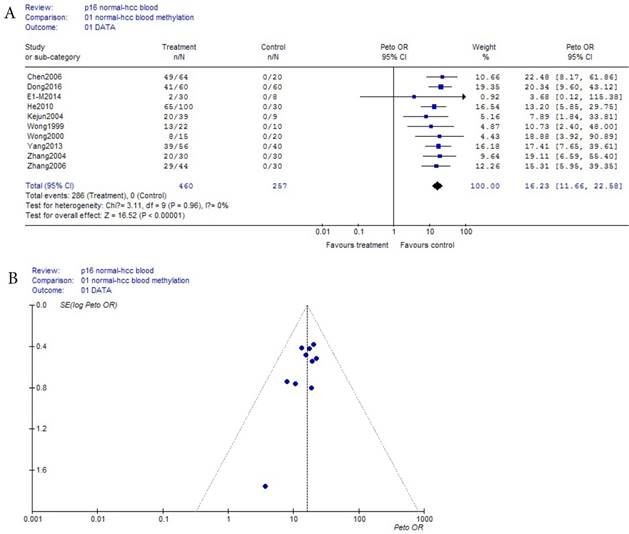 (a) Forest plot between benign disease and HCC risk in blood Fig.3 (b) Funnel plot of corresponding figure 3 (a) 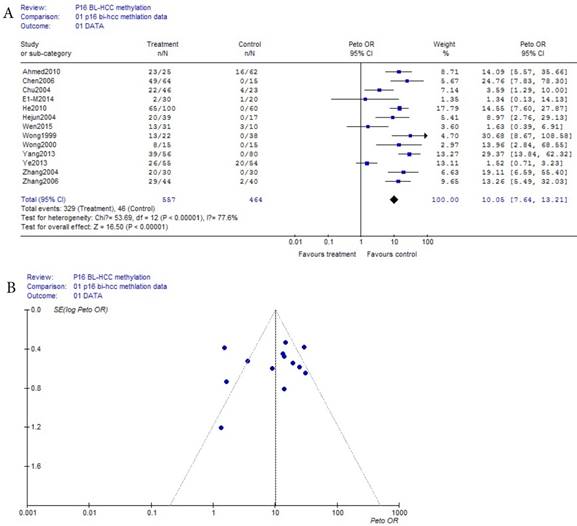 The previous studies were performed to investigate the effect of p16 methylation on HCC patients using the meta-analysis of available case-control studies in tissue [7,24]. Meta-analysis was relatively rare in blood study, so far, the study between normal and benign liver diseases in blood have not been reported, our findings suggested that the combination of p16 methylation and AFP level may be a promising non-invasive discrimination in HCC patients. Previous study identified the correlations between p16 aberrant methylation and HCC [OR, 95% CI =13.41 (9.18, 19.5) in carcinoma tissues/normal tissues, and OR, 95% CI =123.15 (49.12, 308.74) in carcinoma serums/normal serums] [24]. Both tumor tissues of HCC patients and healthy liver tissues of patients with other diseases (OR 12.17, 95% CI: 6.64%-22.31%) and tumor tissues of HCC patients and liver tissues of patients with non-tumorous liver diseases (OR 6.82, 95% CI: 4.31%-10.79%) were got with the study of the meta-analysis [7]. Our results shown that there was no risk in between normal and benign disease bloods, and that there were the risks OR, 95% CI =16.23 (11.66, 22.58) in between normal control and HCC bloods, and OR, 95% CI =10.06 (7.64,13.21) in between benign disease and HCC bloods. In the meta-analysis of one paper, the correlation risk of p16 promoter methylation between HCC and chronic hepatitis blood was OR , 95% CI =12.94 ( 2.29,73.02), and in three papers, the correlation risk of p16 promoter methylation between HCC and liver cirrhosis blood was OR ,95% CI = 6.44 ( 1.16,35.66) [25]. In addition to the risk of this research [OR, 95% CI =123.15 (49.12, 308.74) in carcinoma serums/normal serums] was too large [24], in comparison with other results, our results in blood were basically consistent with tissue results which were previously published. Our results suggested that p16 methylation positive in tissue and blood might predict the clinical progression of HCC patients, and that aberrant p16 methylaition in blood detection was an important way for screening and diagnosis of HCC.

In the most recent Meta-analysis, p16 methylation in HCC tissue was associated with the development, age, hepatic viruses infection of HCC [25]. However, the amount of case-control samples which we had got in the serum was not large. Some results were based on the sample size of the minority population. We will increase the sample size in future research to enhance the reliability of our results. Everyone don't know that P16 protein expression reduced by methylation was related to clinicopathological features of HCC patients with regard to AFP level, tumor metastasis and presence of multiple nodules. We shall hope that with the aid of p16 epigenetics, these problems will be discussed in the future, and that p16 methylation non-invasive in application value of HCC needs to be further confirmed.

HCC pathogenesis affecting p16 methylation was no work during normal person blood, when from benign diseases to HCC, produced a powerful role. The transcriptional inactivation of p16 gene associated with p16 methylation in blood might start from the benign liver disease, and was increased dramatically between benign liver diseases and HCC process, and eventually they synchronously impacted HCC occurrence. p16 methylation in blood may be a promising non-invasive biomarker for HCC's prediction and diagnosis.

21. Dong XG. et al. Detection of methylation of p16 and RASSF1A gene in plasma and tumor tissues from patients with hepatocellular carcinoma and its clinical significance. Chin Med Biotechnol. 2016;11(3):252-258