Results: The single-locus analysis indicated that RPTOR rs1062935 T>C was associated with an increased risk of poor GC prognosis (CC vs. TT/TC: adjusted Hazard ratio (HR) = 1.71, 95% confidence interval (CI) = 1.04-2.82). The combined analysis of all eight SNPs showed that patients with more than three risk genotypes significantly increased risk of death (adjusted HR = 2.44, 95% CI = 1.30-4.58), when compared to those with three or less risk genotypes.

Conclusions: Our findings indicated that genetic variants within mTORC1 genes may predict GC prognosis in Chinese populations. The results need to be validated in future studies with larger sample sizes.

Gastric cancer (GC) is the fifth most common type of cancer worldwide with 950,000 new cases diagnosed and more than 720,000 deaths occurred in 2012 1,2. GC is particularly prevalent in China with morbidity and mortality ranking 2nd after lung cancer, posing severe threat to mankind3. Although many therapeutic strategies are applied to GC, the prognosis is still poor. So far, there are few methods recognized for predicting clinical outcomes of GC. Although tumor-node-metastasis (TNM) staging has been regarded as an important predictor of the prognosis, the fact that patients with the same TNM staging having different prognoses suggests genetic variants between individuals may play an important role4, 5. Therefore, identifying novel genetic biomarkers for GC prognosis has the vital clinical significance. Single nucleotide polymorphisms (SNPs), one of most common type of genetic variants among individuals, play a vital role in GC development, invasion, and prognosis5-8. Therefore, we speculated that SNPs may be valuable as biomarkers for GC prognosis.

The mammalian target of rapamycin (mTOR) signaling pathway is involved in cell growth regulation, proliferation and metabolism. Deregulation of the pathway commonly exists in most of human cancers9-11. There are two different forms of mTOR in mammalian cells: mTOR complex 1 (mTORC1) and mTORC2. In particular, mTORC1 is a central regulator of the mTOR pathway that contains mTOR, mammalian lethal with sec-13 protein 8 (MLST8) and the regulatory-associated protein of mTOR (RPTOR), and this pathway is sensitive to rapamycin inhibition12. The upstream signaling pathways of mTORC1 include phosphoinositide 3-kinase (PI3K)/AKT pathway and Ras/MAPK pathway. The eIF4E binding protein 1 (4E-BP1) and ribosomal protein S6 kinases (S6K1) are the main downstream elements of mTORC113. The main functions of mTORC1 include supporting cell growth, proliferation, cell metabolism and angiogenesis14-16. Previous studies have shown the activation of PI3K/AKT/mTOR signaling pathway has an effect on the prognosis for GC patients17-19. In addition, it was demonstrated that genetic variants within mTORC1 genes were associated with esophageal cancer and GC risk20, 21.

There are few published studies that have addressed the role of genetic variants in mTORC1 genes in GC prognosis. Considering the mTORC1 plays an important role in the development of GC, we evaluated the associations between potential functional SNPs in mTORC1 genes and GC prognosis in Chinese populations. Additionally, as we know, GC is a complex genetic disease, so we tried to explore the joint effects of multiple SNPs on GC prognosis.

A total of 197 GC patients who underwent a surgical resection were recruited from Xin Hua Hospital affiliated to Shanghai Jiaotong University School of Medicine (Shanghai, China) between April 2010 and December 2012. All patients were newly diagnosed with gastric adenocarcinoma confirmed by histopathological examinations. None of these patients had chemotherapy or radiotherapy prior to surgery. Paraffin-embedded tissues of patients were available. The information of clinical and pathological data, such as age, sex, tumor size, differentiation, depth of invasion and drinking status, were acquired by patients' medical records. The stage of GC was evaluated according to the tumor-node-metastasis (TNM) classification of the American Joint Commission on Cancer (AJCC) in 2010 (the 7th edition). All the patients were followed up through the outpatient service and telephone calls. The last time of follow-up was December 2015. The survival time was defined as the time between the date of surgical operation and the date of the last contact or cancer-related death. This study was approved by the Medical Ethics Committee of the hospital.

Median survival time (MST) was used to estimate the time point when 50% studied patients died, and mean survival time was a statement about the observed time. When MST could not be calculated, mean survival time would be provided. Survival rates were determined using the Kaplan-Meier plots. Log-rank test was used to compare survival times across clinical features and different SNPs. HR and CIs were calculated by univariate and multivariate Cox hazards regression analyses for evaluating the factors of influencing survival time. The value of P < 0.05 was considered statistically significant. All analyses were performed with SAS software (version 9.1; SAS Institute, Cary, NC).

Clinical characteristics of the study population

A total of 197 gastric adenocarcinoma patients were included in the study. Among them, 129 (65.5%) were males and 68 (34.5%) were females. The median age was of 63 years (range, 25 to 88 years). According to the National Comprehensive Cancer Network (NCCN) clinical practice guideline, about 50% patients with Stage II or III received either cisplatin-containing regimen, taxel-containing regimen, 5-fluorouracil (5-FU)-containing regimen or a similar regimen in which 5-FU was replaced by tegafur/gimeracil/oteracil (S-1) as the adjuvant chemotherapy after surgery. During the follow-up period, 85 patients died from GC and three patients were lost to follow-up.

As shown in Table 1, patients with tumor size > 4cm, T3 or T4 invasion, Stage III/IV, vascular, lymphatic vessel and perineural invasion, chemotherapy were obviously at higher risk of death compared with those with tumor size ≤ 4cm, T1/T2 invasion, Stage I or II, without vascular, lymphatic vessel and perineural invasion, non-chemotherapy (adjusted P = 0.029, 0.017, < 0.001, < 0.001, 0.036, respectively). None of the other characteristics were associated with OS.

1 Mean survival time was provided when MST could not be calculated.

Associations between mTORC1 SNPs and OS of GC patients

1 Mean survival time was provided when MST could not be calculated.

Survival plot of GC patients with different No. of at-risk genotypes. 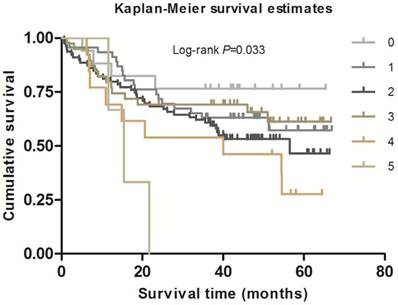 Survival plot of GC patients with No. of at-risk genotypes less than or equal to 3 and greater than 3. 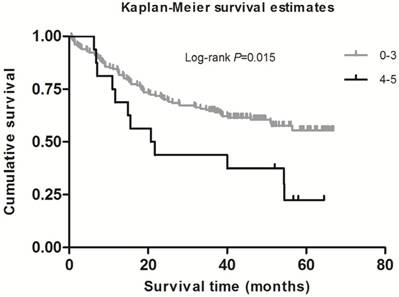 In the study, we firstly evaluated the effects of eight SNPs within three mTORC1 genes on survival of GC patients. We found that RPTOR rs1062935 CC variant increased risk of GC death, as well as patients with more than three risk genotypes, when compared to those with three or less risk genotypes.

MTORC1 plays a vital role in the mTOR signaling pathway and mTOR, MLST8 and RPTOR are the three major components of mTORC1. MTOR is a 289 kDa and evolutionarily conserved serine/threonine kinase which belongs to PI3K-related kinase family22. One study indicated that mTOR played an important role in regulating developmental and metabolic processes23, while inhibiting mTOR might extend lifespan in animals24. MLST8, also known as GbetaL, is essential in activating the mTOR kinase. Except for directly stabilizing the active site of mTOR, MLST8 may be associated with other cellular proteins. Knockdown of MLST8 inhibits tumor growth and invasiveness in some human cancers25-27. RPTOR, located at chromosome 17q25.3, acts as a scaffold role to recruit substrates to the mTOR kinase, thereby regulating the activity of mTOR28, 29. The deletion of RPTOR remarkably impaired acute myeloid leukemia (AML) progression through analyzing AML mouse models30.

The mTORC1 signaling pathway involves in an increasing number of human diseases, such as diabetes, obesity, autoimmune disorders and cancers31. Some studies investigated the associations of genetic variants in mTORC1 pathway genes with susceptibility and survival of different cancers. For example, Chen M et al. identified that four SNPs (rs11653499, rs7211818, rs7212142 and rs9674559) in RPTOR were associated with an increased risk of bladder cancer32, and He J et al. found that mTOR rs1883965 A variant genotypes were associated with an increased GC risk21. Although Zhu J et al. did not find main effects of five SNPs located in PIK3R1 and mTOR with esophageal cancer risk using their own data, meta-analysis identified mTOR rs2295080 associated with cancer risk and the same effect occurred among subjects with one-to-three risk genotypes in further combined analysis. They also found the gene-environment interactions in esophageal carcinogenesis33. Similar to our results, their findings further validated the importance of genetic variations as well as mTOR signaling pathway on the development of cancer. It also reminds us gene-environment interactions may play a key role in determining clinical outcomes. A meta-analysis revealed mTOR rs11121704 TT was associated with poor clinical outcome, including death, metastasis and resistance to chemotherapy in patients with lung and esophageal cancer34. Piao Y et al. found two SNPs in mTOR and AKT genes increased GC susceptibility in the subgroups of man, H. pylori-negative individuals, and one SNP in AKT gene associated with lymph node metastasis but not with the survival in 203 cases35. Although researchers investigated different SNPs in different genes from different perspectives, and produced the final results differently, published results and ours both supported the hypothesis that SNPs in mTOR signaling pathway have positive effects on GC risk and prognosis.

Some studies have indicated that clinical pathological characteristics and adjuvant therapy would affect overall survival, however, the phenomenon that not all patients with the same situations have the same survival time suggests genetic variations may also insert one foot. Several publications have showed the associations between the two in kinds of cancers which were further proved not to be illusions from the biological aspect. Even if no genetic main effects existed for bulks of SNPs, according to several studies, we believed SNPs of interest might collectively confer and modulate cancer outcome.

Our study could not find main effect for some SNPs which may clash with other studies. The reasons may be the limitations existing in our study. We observed that the combined effect of genetic variants in mTORC1 genes on a poorer survival of GC. We have the excuses to believe the situation is common that the effect of each SNP we studied is relatively weak. When multi-SNPs were combined, they jointly present a much stronger effect than any single SNP36. Previous genetic association studies also showed that human complex traits can be influenced by the cumulative effects of multiple common SNPs, each with small individual effect and little predictive value37. But beyond that, the relatively small sample sizes may provide limited statistical power to detect the week effect of single SNP on GC survival.

We need be caution when drawing a conclusion because some limitations exist in our study. Firstly, the sample size was relatively small, especially for the low MAF of two SNPs (rs1882965 and rs2536), so we could not have enough power to calculate weak effects of genetic variants on clinical outcomes. Secondly, only eight SNPs were included in our study, some important genetic variants may be neglected. Thirdly, this is a retrospective study with inherent defects which may introduce selection bias or information bias. Finally, functional mechanisms underlying genetic variants influence on clinical outcomes could not be elucidated, which may confuse us it is a real association or just an illusion, although some studies have shown mTOR SNPs might affect gene expression, or modulating transcriptional activity, miRNA binding and splicing36.

In conclusion, our findings demonstrate that genetic variants in mTORC1 genes may influence GC prognosis in Chinese populations. Further studies with larger sample size, more rigorous and prospective studies are required to confirm our findings.

This study was supported by funding from the Science and Technology Commission of Shanghai Municipality, China (Grant No.15ZR1427700), Shanghai Municipal Commission of Health and Family Planning (Grant No. 201540271) and China-Canada Joint Effort Program (Grant No. 2014DFG31460). We thank Dr. Qingyi Wei from Duke University Medical Center for his assistance in scientific editing and Ming Jia from Fudan University for his technical support.