Objectives: Chemotherapy and radiation therapy are the standard treatments for patients with small-cell lung cancer (SCLC). However, recent studies suggest that patients with limited stage (I-III) SCLC may benefit from surgical treatment. This study was performed to evaluate the survival outcomes of surgery for stage I-III SCLC.

Conclusions: Surgical resection was associated with significantly improved OS outcomes and should be considered in the management of stage I-III SCLC.

Lung cancer is the leading cause of cancer-related death worldwide. In the United States, it is the second most common cancer (approximately 13%) and was the leading cause of cancer-related death for both sexes (approximately 26%) in 2016 [1]. Small-cell lung cancer (SCLC), which accounts for approximately 15% of all lung cancer cases, has a poor prognosis because of its very aggressive clinical course and early metastasis. The primary cause of SCLC is smoking; 90% of SCLC patients are current or previous smokers, with an increased risk of disease positively correlated with smoking duration [2, 3]. SCLC is generally staged on a binary two-stage classification based on the Veterans Administration Lung Study Group system: limited disease (LD) wherein the disease is confined to the ipsilateral hemothorax and occurrence of regional lymph node metastasis, and extensive disease (ED) wherein the disease has progressed beyond the ipsilateral hemothorax [4, 5]. A tumor-node-metastasis (TNM) staging system for SCLC was also recently adopted [6].

An increasing amount of research supports the fact that surgical resection can improve survival outcomes in patients with SCLC, especially in early-stage patients [12-26]. Furthermore, the European Society for Medical Oncology recently recommended that surgery be considered in select cases in T1-2, N0-1 stage without mediastinal node involvement, which should be followed by chemotherapy; while surgery for pathologic N1 and unforeseen N2 cases should be followed by postoperative radiotherapy (PORT) [27]. In addition, surgical resection of small lesions without lymph node involvement has been recommended as a curative choice for LD-SCLC [28]. Therefore, to further define the role of surgery in patients with SCLC, we acquired data from the Surveillance, Epidemiology, and End Results (SEER) database and performed a retrospective analysis of patients with stage I-III SCLC diagnosed from 2004 to 2014. We also evaluated the outcomes of PORT versus surgery alone treatment in patients with SCLC.

The SEER database is sponsored by the National Cancer Institute (NCI), and provides registry information on cancer incidence, staging, and patient survival in specific geographies within the United States since 1973. We accessed the database from the SEER website (http://seer.cancer.gov/data/options.html). The study cohort was comprised of de-identified individual patients from the NCI SEER 18 Registries (SEER*Stat Database: Incidence—SEER 18 Custom Data [with additional treatment fields] Nov 2016 Sub). SEER data are de-identified (i.e., without personal identifiers) and submitted electronically to the NCI; they are available to the public for research purposes. The use of de-identified subject data precluded Institutional Review Board and ethics committee approvals.

Data from 4,780 patients who had been diagnosed with histologically confirmed SCLC from 2004 to 2014 were extracted from the SEER database. Patients who met the following criteria were eligible for inclusion in the study: (1) Site and morphology. Site recoded ICD-O-3/WHO 2008: Lung and Bronchus. (2) International Classification of Diseases for Oncology, 3rd Edition (ICD-03) codes 8002, 8041, 8042, 8043, 8044, and 8045. (3) Without chemotherapy (Chemotherapy recode: No/Unknown). (4) Patients with American Joint Committee on Cancer (AJCC) stage I, II, or III disease. Patients treated without surgery were staged clinically and patients who underwent surgery were staged pathologically. Patients with N3 and Nx disease, surgery unknown, and survival months unknown were excluded from the study. Demographic data collected included patients age at diagnosis, gender, and race. Pathologic characteristics collected included primary tumor site and neoplastic grade.

All patients were staged using AJCC with stage I, II, or III disease. Patients who underwent surgery were staged pathologically and those without surgery had clinic staging. Patients with N3 SCLC were excluded from the study as they typically do not undergo surgery due to the potential involvement of contralateral mediastinal, contralateral hilar, ipsilateral or contralateral scalene, or supraclavicular lymph nodes. Patients with Nx disease were also excluded as their regional lymph node status could not be assessed. Therefore patients with stage I-III, N0-N2 SCLC were included in this study.

The primary outcomes of this study were overall survival (OS) and lung cancer-specific survival (LCSS). Follow-up duration was calculated from 2004 to 2014.

Characteristics of Patients With Stage I to III Small Cell Lung Cancer (n=4,780)

Effects of surgery on OS and LCSS

Effect of surgery type on survival

Next, we examined the effect of surgery type on OS and LCSS. Comparing lobectomy, partial/wedge/segmental resection, pneumonectomy, and no-surgery, four survival distributions showed that lobectomy was the most effective surgical method (Fig. 2).

Kaplan-Meier survival analysis for OS and LCSS based on surgery or no-surgery at stage I-III and each stage of SCLC. 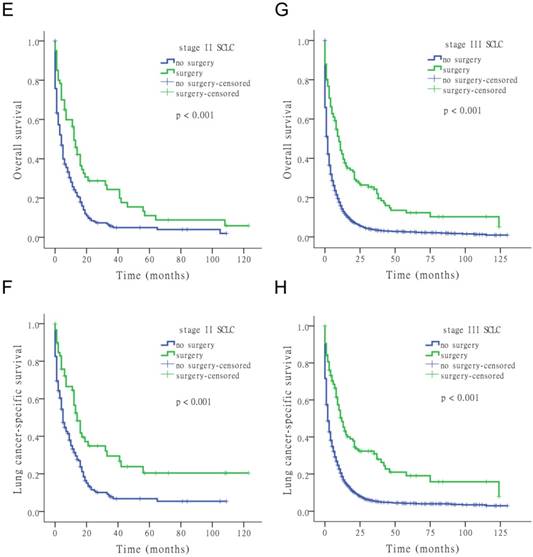 Kaplan-Meier survival analysis for OS and LCSS based on surgery type.

Kaplan-Meier survival analysis for OS and LCSS to assess the impact of surgery alone or PORT for stage I-III SCLC. 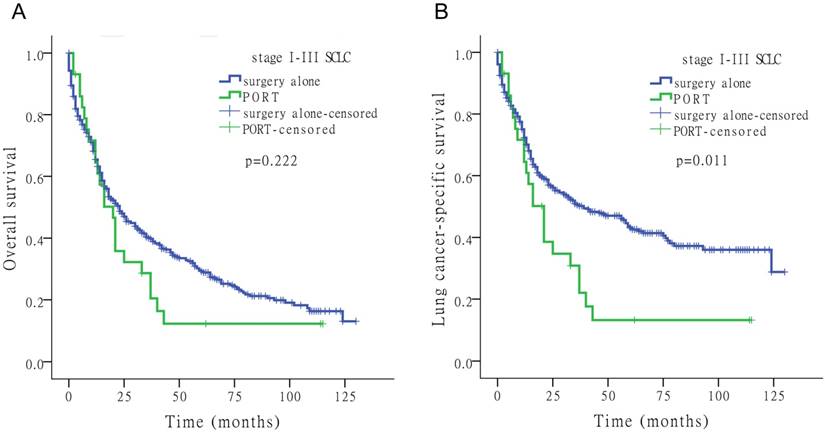 Effects of PORT on survival

Of the 4,780 patients included in the study, 92 (1.9%) underwent PORT. Fig. 3 shows the Kaplan-Meier survival analysis for OS and LCSS based on surgery alone and PORT with stage I-III SCLC. PORT did not significantly improve survival compared to surgery alone in patients with SCLC (Tables 2-4).

Recently published retrospective studies have reported favorable outcomes for surgery in stage I and II SCLC patients [29, 30]. However, whether surgical resection is beneficial for stage III SCLC patients remains unclear, which we aimed to address in this report. In this study of a large national database, patients with stage I-III SCLC who underwent lung resection had significantly better survival than patients treated without surgical resection. This benefit was particularly noted in patients with stage I disease. Patients who underwent lobectomy had the best outcomes with a median OS of 34 months and LCSS of 56 months compared to 2 months OS and 3 months LCSS for non-surgically treated patients. Further analysis revealed that surgically treated patients who underwent PORT did not have a higher OS and LCSS than those who underwent surgery alone.

Our research has provided novel findings and approaches compared to previous publications. First, we studied patients with stages I to III SCLC who underwent surgical resection. Currently, patients with stage I SCLC are offered surgery as part of their treatment plan, whereas those with stage II or stage III disease undergo chemoradiotherapy [31]. Yu et al. [30] reported a favorable 5-year survival rate of 34.3% in patients with stage I SCLC underwent surgical resection. Rostad et al. [32] showed that the 5-year survival in the surgical group was 44.9% compared to 11.3% in the conventionally treated group in patients with stage I disease. We found that not only stages I and II, but also stage III SCLC patients who underwent surgery had favorable outcomes. Thus, surgery may play a greater role than current guidelines suggest. Second, because chemotherapy has become the mainstay of treatment for SCLC, many studies have focused on surgery with systemic chemotherapy[33, 34]. We chose patients who did not undergo chemotherapy, to determine the effects of surgery on survival. Finally, we included a large group of patients who had been diagnosed with SCLC from the SEER database in recent years, which made the study results more credible. The current standard of care for patients with SCLC is chemotherapy and radiotherapy. The value of surgery remains controversial, but recent recommendations have suggested that surgical resection may be an option for early-stage disease [27, 28]. A recently published retrospective study by Schreiber et al. [29] analyzed the role of surgery in over 14,000 patients with limited-stage SCLC diagnosed between 1998 and 2002, based on the SEER registry. The authors observed that surgery significantly improved survival outcomes compared to non-surgically treated patients, with a median survival of 42 months versus 15 months (p < 0.01) for patients with local disease, and 22 months versus 12 months (p < 0.001) for those with regional disease. Furthermore, surgically treated patients had a 5-year OS rate of 34.6% compared to 9.9% for the non-surgery group. Subgroup analysis further revealed that in comparing surgical resection with non-surgery groups, the 5-year OS rate was 44.8% versus 13.7% (p < 0.001) for stage I patients and 26.3% versus 9.3% (p < 0.001) for those with regional disease. Moreover, in comparing the type of surgeries, patients who underwent lobectomy had the most favorable outcomes, with 52.6% 5-year OS rates for local disease and 31.8% for regional disease. Another SEER-based retrospective study of 1,500 stage I patients treated between 1998 and 2004 found that patients who underwent lobectomy regardless of radiotherapy had a 5-year OS of 50% [30]. Patients who underwent lobectomy without adjuvant radiotherapy had a 49.1% 5-year OS and those who had combined lobectomy and radiotherapy had a 5-year OS of 57.1% compared to 28.4% 5-year OS of those who underwent radiotherapy alone. Our findings are in agreement with these retrospective studies. However, our data showed that at each stage of disease, PORT could not improve survival compared to surgery alone. This finding may be because the number of PORT patients was few. Thus, large-scale investigations on PORT patients are needed.

This retrospective report had some limitations. First, the chemotherapy information was incomplete and not explicit. We chose patients who had not undergone chemotherapy treatments, but some of these patients could not be determined. Second, as a retrospective study, inherent selection bias was inevitable. Third, we found that PORT represented patients who underwent surgery including surgery to other regional or distant sites.

Insights into the potential cellular and molecular mechanisms need to be investigated in more detail. Gazdar and co-workers [35] showed that the biological characteristics of SCLC partially explained the high rate of treatment failure. Inactivation of the tumor suppressor genes TP53 and RB1 is probably the initiating molecular event. Further, frequent disruption of several signaling networks, including Notch signaling, likely also plays a role. NFIB encodes a transcriptional regulator that is essential for embryonic lung and brain development. It is often overexpressed in metastases and is important for the progression and invasion of tumors [36, 37]. These characteristics partly explain the rapid growth and early metastatic spread of SCLC. This is why patients with very early-stage disease can undergo surgical resection, and surgery usually needs to be carefully considered for patients with stage III SCLC. Our study demonstrated that patients with stage I-III SCLC who underwent surgical resection had significantly better survival.

Patients with stage I-III SCLC appear to benefit from surgical resection. Thus, surgical therapy should not be withheld when a solitary pulmonary nodule is found to be SCLC. In patients who can tolerate lobectomy, we suggest that this should be the operation of choice. However, in patients who cannot tolerate a lobectomy, a lung-sparing procedure, such as wedge resection, also appears to offer survival benefit. Although not studied in this report, chemotherapy is an important component in the treatment of SCLC, and should be considered for all patients. PORT did not improve survival compared to treatment with surgery alone in patients with stages I to III SCLC. This study expands upon other studies that suggest that oncologists should consider offering surgical therapy to patients with stage I-III SCLC.