Gastric cancer (GC) is the fifth most common neoplasia and the third leading cause of cancer-related death worldwide [1]. There were an estimated 951,000 new cases in the world in 2012, and approximately half of the total GC cases were in China [2]. Despite the overall decline in adverse outcomes with the advances in diagnosis and treatment in most of the Western world, GC remains a serious fatal disease and has a poor prognosis throughout Asia, especially in China [3]. GC as a heterogeneous disease shows distinct clinical, epidemiological, and molecular features among tumors arising from the cardia or non-cardia stomach and among the intestinal and diffuse histological subtypes [4, 5]. Additionally, GC is a multi-step and multi-factorial disease that is influenced by environmental factors, microbial infections, and the host genetic background [6, 7].

The TOB1 (transducer of ErbB2,1) gene is a member of the TOB/B cell translocation BTG family, which includes BTG1, BTG2/TIS21/PC3, BTG3/ANA, BTG4/PC3B, TOB1/TOB, and TOB2 [8]. The TOB1 gene is located on chromosome 17q21 and codes for a 45-kDa protein, which was first discovered in the 1990s [9]. As a tumor suppressor, the effect of the TOB1 gene involves many aspects, including anti-proliferation, inhibition of transcription, and the reduction of the migration and invasion of tumor cells in thyroid [10], breast [11], and lung [12] cancers.

We recently identified several allelic deletions on chromosomes 17 and 18 in 45 primary GCs using microsatellite markers for the loss of heterozygosity (LOH). TOB1 lies in one of these regions (17q21.3-22) on the long arm of chromosome 17 [13, 14]. Then, we demonstrated that the down-regulation of TOB1 expression and the accumulation of phosphorylated TOB1 promoted carcinogenesis in four GC cell lines and tissue specimens from 97 patients with primary GC [15]. Furthermore, we identified that decreased TOB1 expression and increased phosphorylation of nuclear TOB1 were associated with a malignant tumor phenotype and poor survival in 341 primary GC patients [16].

Recently, increasing numbers of studies have identified that genetic variation plays an important role in the development of most diseases, especially in tumors [17]. Single nucleotide polymorphisms (SNPs), as the most common form of genetic variation, play an important role in the development of GC [18, 19]. Increasingly more studies have been performed to investigate the association between tumor suppressor gene polymorphisms and GC risk [18, 20]. A GWAS (genome wide association study) revealed that two SNPs in the PSCA gene were associated with an increased diffuse-type GC risk in a Korean and Japanese population [21]. A meta-analysis indicated that in the P53 codon, 72 polymorphisms might be associated with GC among Asians [22]. However, the association of the SNPs in the TOB1 gene with the risk in malignant tumors (including GC) has not been reported.

TOB1, as a tumor suppressor, encodes a member of the transducer of erbB-2/B-cell translocation gene protein and has the potential to regulate cell growth. However, it is not clear what role the TOB1 gene polymorphisms play in GC risk. Here, we investigated the association between some SNPs in the TOB1 gene and GC risk in a set of 506 GC patients and 548 healthy controls (HCs). Our results suggested that SNPs (rs12601477, rs4626, rs34700818, and rs61482741) in the TOB1 gene are important markers for GC risk in the Chinese Han population.

A total of 506 unrelated Han Chinese primary GC patients were recruited from The Tumor Hospital Affiliated to Harbin Medical University between January 2015 and June 2016. A total of 548 age- and sex-matched HCs were recruited from The Second Affiliated Hospital to Harbin Medical University during the same period. This study was approved by the ethic committees at local hospitals.

Each participant was interviewed face-to-face by trained interviewers using a standardized questionnaire. The data, including age, gender, family history, native origin, pathological diagnosis, smoking status and alcohol consumption, were collected. Individuals who smoked at least once a day for more than a year were defined as smokers, and the others were defined as non-smokers. Those who consumed alcohol at least once a week for more than a year were defined as drinkers, while the remaining were non-drinkers. The clinical data and demographics of the GC patients and the HCs are summarized in Table 1.

Written informed consent was obtained from each participant. With the permission of the subjects, peripheral venous blood (5 ml) was collected and stored at -80°C in EDTA tubes for DNA extraction.

Clinical and demographic characteristics of cases and controls

Continuous variables with a normal distribution were described as the mean ± standard deviation and were compared using a Student's t-test. Discrete variables were described as the frequency (percentage) and were compared using the Chi-square (χ2) test. The genotype frequencies for all the TOB1 gene polymorphisms of the controls were tested for Hardy-Weinberg equilibrium by using a Chi-square test. Associations of the genotypes and alleles with the risk of GC were estimated by the odds ratios (ORs) and 95% confidence intervals (CIs). Linkage disequilibrium (LD) and haplotype analyses were performed with Haploview 4.2 software (http://sourceforge.net/projects/haploview/). P values and ORs with 95% CIs were calculated using a logistic regression analysis adjusted for age, gender, smoking status, pack-years, and drinking status. All the statistical analyses were performed using the SAS 9.3 software. All P values in the study were two-sided, and P<0.05 was considered statistically significant.

The genotype distributions of the eleven SNPs among the cases and controls and their associations with GC risk are summarized in Supplementary Table 1. The genotype frequencies of all the SNPs of the controls were in accordance with Hardy-Weinberg equilibrium (P>0.05). All the allele frequencies were not significantly different in the case and control groups. Variables including age, gender, smoking, drinking, and pack-years were adjusted for in the subsequent logistic regression analyses. The result showed that none of the eleven SNPs were associated with GC risk in the homozygotes or heterozygotes after adjusting for age, gender, smoking status, pack-years and drinking status (P> 0.05). 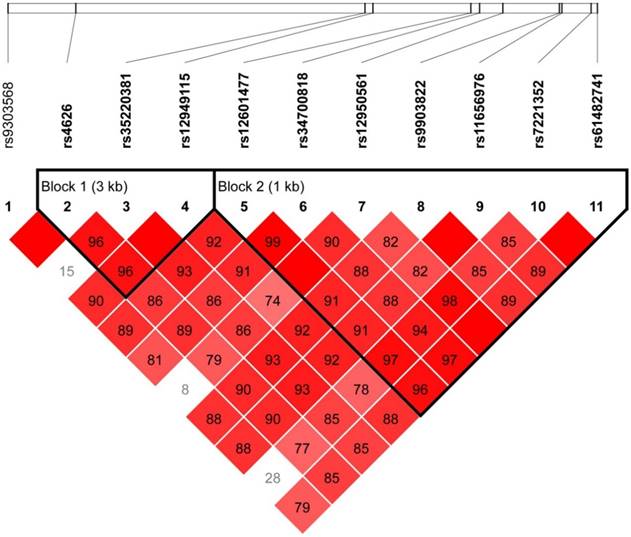 We previously identified that three overlapping regions (R1-R3) highlighted the association between the LOH on chromosome 17 and GC pathogenesis [13]. Afterward, we narrowed down these intervals using high-density genome scanning and defined five smaller overlapping subregions of LOH (SR1-SR5) in the GC samples. Ultimately, we focused on the TOB1 gene in SR3 (17q21.33), which has not been investigated in GC. Furthermore, our studies demonstrated the down-regulation of TOB1 expression in 75% of primary GCs and the accumulation of phosphorylated TOB1 in GC cells [15]. Recently, we identified that decreased TOB1 expression and increased nuclear phosphorylated TOB1 were associated with aggressive tumor behavior and a poor prognosis in intestinal type GC. Additionally, TOB1 nuclear retention is critical for its anti-proliferative activity in vitro [16].

Multiple factors, including Helicobacter pylori (Hp) infection [22], nutrition deficiency, a high salt diet, and the chemical carcinogens in tobacco [24, 25], may play an important role, although the etiology and pathogenesis of GC is still uncertain. Furthermore, even if exposed to the same exogenous environmental factors, only a small fraction of people will develop GC, which implies that endogenous genetic variation may also contribute to the individual susceptibility to GC. Recent studies suggest that SNPs may be related to gastric tumorigenesis [19]. Huang C et al. demonstrated that the CT+TT genotypes of the DACT1 rs863091 polymorphism were significantly associated with a decreased risk of GC in the Chinese Han population, especially in younger individuals and males [18]. DACT1 is a tumor suppressor gene that suppresses tumorigenesis in GC by inhibiting the NF-κB signaling pathway [26]. NF-κB might participate in β-catenin-mediated target gene expression and eventually results in enhanced tumor growth [27]. TOB1 is a functional anti-oncogene that mainly induces apoptosis and inhibits proliferation, migration and invasion via the activation of Smad4 and the suppression of the β-catenin-mediated signaling pathways in GC [28].

We also found that the rs12601477 GA+AA genotypes and the rs4626 AG+GG genotypes were associated with a significantly increased risk of GC among individuals older than 58. This difference may be related to the weaker or disordered immune system in older individuals [31]. TOB1 is expressed in several cell types. It associates with Smad2 and Smad4 DNA binding and Smad-dependent transcription in T lymphocytes [32]. Increasingly more reports indicate that the TOB1 gene is associated with human immune-related disorders [33]. Low levels of TOB1 may promote an aberrant immune response and affect disease progression [34].

The rs34700818 CT+TT genotypes and the rs61482741 CG+GG genotypes were associated with a significant increase in T3-T4 and TNM stage II. The function of TOB1 involves anti-proliferation, inhibition of transcription and reduction of cancer cell migration, invasion, and metastasis [12]. Gene polymorphisms produced by the replacement, insertion, and loss of a base, which lead to a change in the sequence of the nucleotide, affect the transcription and translation process and ultimately affect the expression of proteins. A GWAS identified that several SNPs are significantly associated with GC. Two GWASs demonstrated that the genetic variant loci in PLCE1 at 10q23 and, for non-cardia GC, at 3q13.31 and 5p13.1 increase the risk of tumors in the stomach [35, 36]. A SNP (rs41274221) in miR-25 regulates the expression of TOB1 by binding with its 3'-UTR region in GC. The mutant genotype promotes cell proliferation and suppresses apoptosis by changing the expression of TOB1 in GC [37].

To date, an increasing number of researches focus on the role of TOB1 in gastric cancerogenesis, which including the localization and expression of the gene[13-15], the mechanisms of inactivation, tumor suppressor involving the participating pathways, and its effect in the cell cycle, etc. [16, 28, 38]. A new study reported that TOB1 gene was contribute to estrogen-independent breast cancer and the interaction effects between TOB1 gene with AKT/mTOR survival signaling [39]. All of the above studies were carried out in cancer tissue or cell lines. Our study is an expansion of the previous work, and it is the first time to investigate the association between TOB1 gene polymorphism and GC susceptibility with molecular markers in peripheral blood. Our results showed that the genotypes of the two SNPs (rs34700818 and rs61482741) have significant association with the increased invasion and severity, which suggesting that they impair the inhibition of TOB1. The study provides a direction of predicting the prognosis of the progress of GC and developing some targeting drugs based on these two SNPs. Next, we will continue to enlarge the sample size and to perform functional verification.

There are several limitations in this study, which should be considered. First, partial missing clinical information of the cases, such as data on the TNM stage and Lauren's classification, prevented further analysis. Second, Hp infection is not only an independent but also an important risk factor of GC. The examination of HP infection is not yet a routine examination item. Thus, we did not collect enough information on HP infection for all the subjects, especially for the controls. Third, although our sample size was relatively large, the samples were dispersed in the subgroup analysis and the multilayer analysis. Hence, we will continue to increase the number of GC samples in the next study. Despite these limitations, this is the first study to examine the role of TOB1 gene polymorphisms in the susceptibility to GC. Our findings provide a novel clue for the associations between the SNPs of the TOB1 gene and GC risk in the population of northeast China. Further studies should focus on the effect of the two polymorphisms in the TOB1 gene on gastric tumorigenesis.

In conclusion these results indicated, for the first time, that the four SNPs (rs12601477, rs4626, rs34700818 and rs61482741) of the TOB1 gene are related with GC risk in the Chinese Han population of northeast China. And there are significant association between three haplotypes and GC risk.

We thank all individuals who volunteered to participate in this study. This study is supported by the National Natural Science Foundation of China (81372174).