Dysregulation of TRIM32 has been implicated in several human cancers, however, its clinical significance and biological function in breast cancer have not been investigated. Using immunohistochemistry, we found that TRIM32 expression is upregulated in breast cancer tissues and that it correlates with advanced stage and poor prognosis. TRIM32 is also overexpressed in 4/7 breast cancer cell lines. CCK8 and colony formation assays showed that TRIM32 depletion inhibited proliferation and colony formation in the T47D cell line, while TRIM32 overexpression promoted MCF-7 cell growth and colony formation. Cell viability and Annexin V/PI staining demonstrated that TRIM32 maintained breast cancer cell survival and reduced apoptosis rate when cells were treated with cisplatin. Western blot analysis demonstrated that TRIM32 overexpression resulted in an upregulation of p-IκB, p-p65, cIAP1, and cIAP2 and a downregulation of p21 and p27 in MCF-7 cells. TRIM32 depletion in T47D cells demonstrated the opposite results, suggesting that TRIM32 may activate the NF-κB pathway. The NF-κB inhibitor BAY 11-7082 blocked the effects of TRIM32 on cisplatin resistance and cIAP1/2 protein regulation.

TRIM32 is a member of the tripartite motif (TRIM) family proteins (8, 9). TRIM32 regulates skeletal muscle stem cell differentiation and is necessary for normal adult muscle regeneration (10). It was recently reported that TRIM32 is involved in carcinogenesis, with TRIM32 mRNA found to be highly expressed in skin cancer and head and neck cancer (11, 12). The function and mechanisms of TRIM32 are not well understood. TRIM32 was reported to have E3 Ubiquitin ligase activity, which may contribute to cell differentiation and carcinogenesis. TRIM32 could ubiquitinate and downregulate tumor suppressor Abi2 to exert its function as an oncogene (12).

To date, the clinical significance and biological functions of TRIM32 in breast cancer have not been well explored. Thus, in this study, we aim to examine TRIM32 expression in breast cancer tissues using immunohistochemistry. We further investigated the function and molecular mechanism of TRIM32 in cancer cell lines.

This study was conducted with the approval of the Ethics Committee at the Institutional Review Board of the First Affiliated Hospital of China Medical University. All participants provided their written informed consent and the investigation was conducted according to the principles expressed in the Declaration of Helsinki.

For colony formation assays, cells were seeded in culture dishes and cultured for 2 weeks. The plates were then stained using Giemsa.

Cell apoptosis was detected using the Annexin V/PI double staining Kit (BD bioscience, USA). After treatment, cells were harvested with 0.25% trypsin, washed with PBS and resuspended in binding buffer. Staining solution containing Annexin V/FITC and propidium iodide (PI) was added to the cell suspension. After incubation in the dark for 30 minutes, the rate of apoptosis was analyzed via ACEA flow cytometer.

SPSS version 17 for Windows was used for all statistical analyses. The Chi-Square test was used to evaluate possible correlations between TRIM32 overexpression and clinicopathologic factors. A Student's t-test was used to compare data between control and transfected cells. All p values were based on the two-sided statistical analysis and a difference with p<0.05 was considered to be statistically significant.

TRIM32 is overexpressed in breast cancers 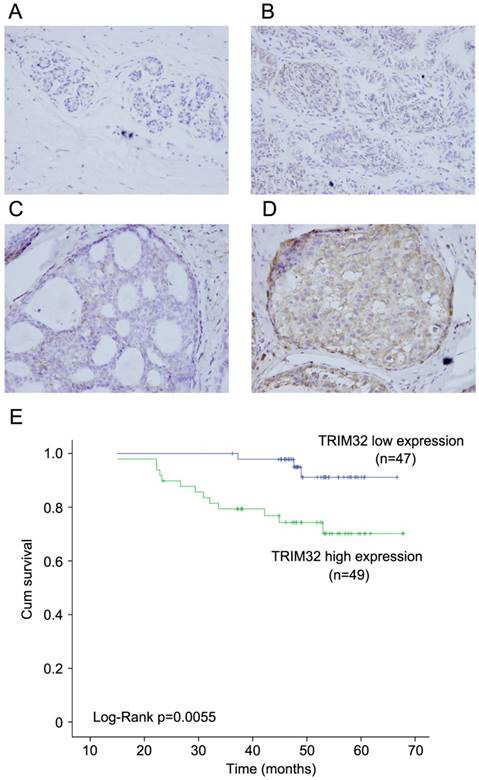 We used western blotting and Real-Time PCR to qualify TRIM32 protein and mRNA in the non-tumorigenic breast epithelial cell line MCF-10A and 7 breast cancer cell lines (Figure 2A&B). The results showed that TRIM32 was significantly elevated in 4 of the 7 cell lines (MDA-MB-453, BT594, T47D and SK-BR-3). Due to their relatively low and high levels of TRIM32 mRNA expression, we selected MCF-7 for TRIM32 overexpression via plasmid transfection and T47D for TRIM32 siRNA transfection. Transfection efficiency was examined and confirmed via PCR and western blot (Figure 2C). In addition, we used a second siRNA sequence to avoid off-target effects. The knockdown efficiency of siRNA2 was shown in Supplementary Figure 1A.

Distribution of TRIM32 status in breast cancer according to clinicopathological characteristics.

To investigate the effect of TRIM32 on chemoresistance in breast cancer cells, we treated cancer cells with cisplatin and performed the CCK8 viability assay to examine survival rates (Figure 4A). TRIM32 overexpression increased cell viability in MCF-7 cells after 24 and 48 hours of treatment with cisplatin at 0.5μg/ml and 1μg/ml concentrations, while TRIM32 depletion reduced cisplatin resistance, resulting in decreased T47D cell viability. 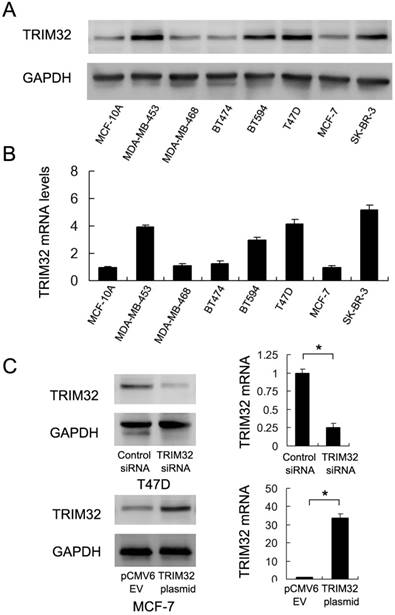 Since TRIM32 inhibits apoptosis and facilitates cell growth, we monitored related proteins to identify affected pathways. We found that TRIM32 overexpression caused upregulated protein expression of cIAP1 and cIAP2, both of which are inhibitors of apoptosis. TRIM32 also downregulated cell cycle inhibitors p21 and p27 (Figure 5). 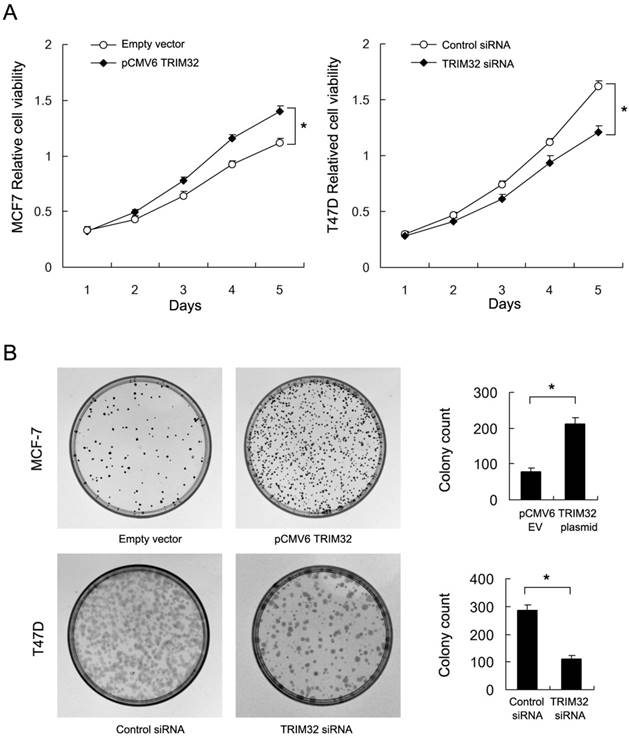 Involvement of TRIM32 in NF-κB signaling has been implicated in previous studies. We tested whether this was the case in breast cancer cells, and found that TRIM32 overexpression activated NF-κB signaling by upregulating p-κB and p-p65 levels, while its depletion downregulated NF- κB signaling via the same proteins. Treatment of T47D cells siRNA2 also downregulated p-κB, p-p65, cIAP1 and cIAP2 levels with upregulated p21 and p27 (Supplementary Figure 1D).

To validate the involvement of NF-κB in TRIM32-regulated cisplatin resistance, we employed BAY 11-7082 (5μM, 12 hours) to inhibit NF-κB signaling in MCF-7 cells overexpressingTRIM32. As shown in Figure 6A, blockage of NF-κB signaling downregulated cell viability and abolished the effect of TRIM32. The rate of inhibition (decreased cell viability/cell viability before treatment) by NF-κB inhibitor was higher in TRIM32 overexpressing cells than control cells (Figure 6B). NF-κB inhibition also blocked the expression of cIAP1 and cIAP2 induced by TRIM32 (Figure 6C). 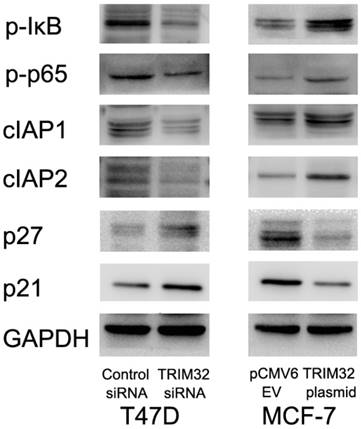 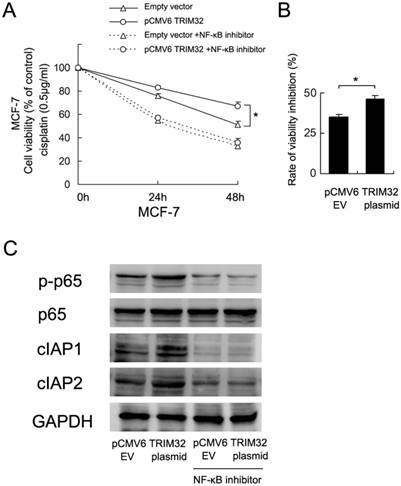 The E3-ubiquitin ligase TRIM32 has been reported to be overexpressed in head and neck squamous cell carcinomas (11). Overexpression of TRIM32 was shown to promote degradation of Abi2, which promoted cell growth and motility (12), and TRIM32 can also negatively regulate p53 and p53-mediated cellular stress responses (13). Overexpression of TRIM32 was further found in hepatocellular carcinoma and correlated with histological grade, tumor size, and poor patient survival (14). These data suggest that TRIM32 acts as a potential oncoprotein in human cancer development. Nevertheless, the expression pattern and biological roles of TRIM32 in human breast cancer remained unexplored. Our immunohistochemical data showed that TRIM32 is elevated in breast cancer tissues, compared to normal tissues, and that its expression significantly correlates with advanced TNM stage, nodal metastasis and poor patient survival, indicating that TRIM32 functions as a tumor oncogene in breast cancer development.

CCK8 and colony formation assays demonstrated that TRIM32 upregulates cell growth rate and colony formation ability in breast cancer cells. Accordingly, p21 and p27 protein were downregulated after overexpression of TRIM32. p21 and p27 are both cell cycle inhibitors which block cell cycle transitions (15, 16). p21 is also a downstream target of p53 signaling (17). Since TRIM32 interacts with p53, promoting its degradation through ubiquitination, it is possible that TRIM32 controls p21/p27 status indirectly through its regulation of the p53 pathway.

Next, we checked the role TRIM32 plays on cisplatin resistance and cisplatin-induced apoptosis. Our results indicate that TRIM32 induces cisplatin resistance and apoptosis inhibition. To find the underlying mechanism, we examined several related proteins and found that TRIM32 positively regulates cIAP1 and cIAP2 proteins. cIAP1/2 belongs to the inhibitor of apoptosis protein (IAP) family, which consists of an evolutionarily conserved group of apoptosis inhibitors. cIAP1/2 proteins directly interact with and inhibit the activity of caspases including caspase-3, 7, and 9 (18). In addition to the change in cIAP1/2 expression, we also found that TRIM32 could activate NF-κB signaling via upregulation of p-IκB and p-p65 expression. Activation of NF-κB signaling has been shown to lead to upregulation of IAP family proteins including cIAP1 and cIAP2 (19, 20).

To further confirm the association of TRIM32-induced cisplatin resistance and activation of NF-κB signaling, we used BAY 11-7082, an NF-κB inhibitor, to block NF-κB signaling in MCF-7 cancer cells. NF-kB inhibitor inhibited the cell viability of both control and TRIM32 cells to the same levels. However, the rate of inhibition (decreased cell viability/cell viability before treatment) was higher in TRIM32 overexpressing cells than control cells. Thus we assumed that the effect of NF-kB inhibitor was more potent in TRIM32-expressing cells, which indicates that biological effects of TRIM32 are mediated, at least partly, by NF-kB pathway. The results also showed that NF-κB blockage decreases cIAP1/2 protein expression and abolishes the effect of TRIM32 on cIAP1/2 upregulation. TRIM32 failed to upregulate cell viability in MCF-7 cells treated with the NF-κB inhibitor, suggesting that TRIM32 regulates cisplatin resistance possibly through NF-κB activation and cIAP1/2 upregulation.

In conclusion, this study demonstrates that TRIM32 is overexpressed in human breast cancers and mediates cisplatin resistance through the NF-κB signaling pathway. Our results provide insight into novel biomarkers which could predict breast cancer chemoresistance.

This work was supported by the National Natural Science Foundation of China (grant numbers 81272718, 81302125 and 81372550). The sponsors played no role in the study design, data collection, or analysis, or decision to submit the article for publication.

9. Meroni G. Genomics and evolution of the TRIM gene family. Advances in experimental medicine and biology. 2012;770:1-9