Verteporfin, a FDA approved second-generation photosensitizer, has been demonstrated to have anticancer activity in various tumors, but not including papillary thyroid cancer (PTC). In current pre-clinical pilot study, we investigate the effect of verteporfin on proliferation, apoptosis, cell cycle and tumor growth of PTC. Our results indicate verteporfin attenuates cell proliferation, arrests cell cycle in G2/S phase and induces apoptosis of PTC cells. Moreover, treatment of verteporfin dramatically suppresses tumor growth from PTC cells in xenograft mouse model. We further illustrate that exposure to MEK inhibitor U0126 inactivates phosphorylation of ERK1/2 and MEK in verteporfin-treated PTC cells. These data suggest verteporfin exhibits inhibitory effect on PTC cells proliferation and cell cycle partially via ERK1/2 signalling pathway, which strongly encourages the further application of verteporfin in the treatment against PTC.

The incidence of thyroid cancer has increased worldwide at a rate higher than any other cancer. Papillary thyroid cancer (PTC) is the most ordinary endocrine malignancy and accounts for 80% cases of differentiated thyroid cancer [1]. In line with the majority of malignancies, thyroid carcinomas are also correlated with specific genetic abnormalities which lead to aberrant cell proliferation. With the rising trends in the incidence of PTC have been well-recognized, the need to develop new treatments is more acute than ever.

Yes associated protein 1 (YAP1) gene is located in the 11q22 amplicon, which is the main nuclear coactivator in the Hippo pathway [2]. Dysregulation of Hippo pathway, as a key oncogenic signal which malignancy cells rely on, could result in permanent activation of pro-tumor signal cascade [3, 4]. Therefore, modulating the Hippo pathway pathway presents an attractive anti-cancer strategy. The small molecule inhibitor of YAP1 [5], verteporfin (VP), a benzoporphyrin derivative approved for photodynamic therapy to eliminate the age-related macular degeneration, may function as a potential candidate for cancer treatment. Indeed, its antitumor effect has been validated in multiple types of cancer, such as pancreatic cancer, breast cancer and colon cancer [5-8], but the role of VP plays in PTC has not yet been known.

Our previous works showed that YAP1, as an oncogene in PTC, could promote cell proliferation of PTC cells via ERK/MAPK signalling pathway [9]. In present study, we demonstrated VP can inactivate ERK1/2 and MEK phosphorylation to inhibit proliferation and arrest G1/S cell cycle of PTC cells. Therefore, we supposed that tumor suppressive function of VP make it be a promising potential strategy for treatment of PTC. 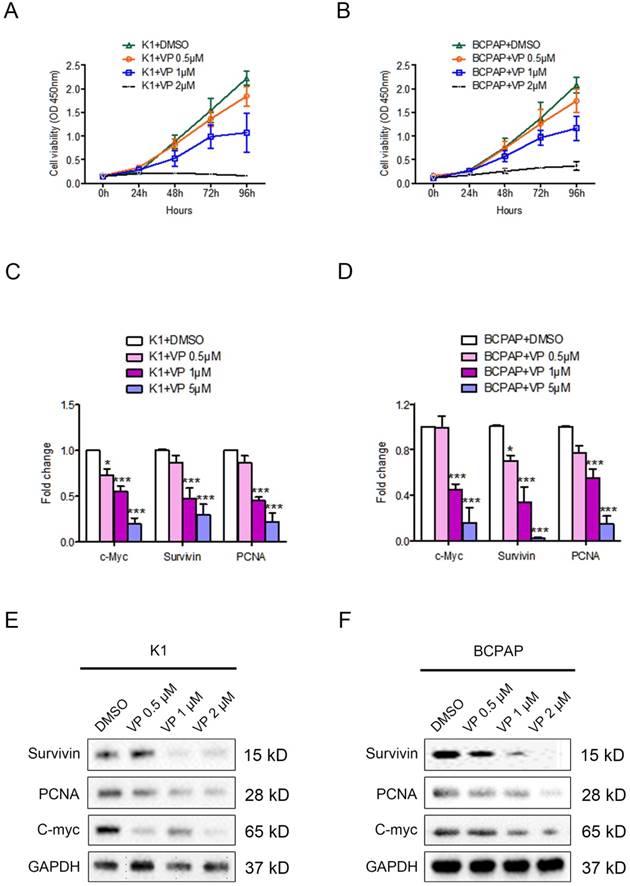 To further determine the anticancer effect of verteporfin on papillary thyroid cancer in vivo, 1x107 K1 cells were subcutaneously interjected into nude mice. After 14 days, the transplanted xenograft tumors were constructed. verteporfin (100mg/kg) was intraperitoneally injected into the mouse in verteporfin-treated group (K1+VP) every 3 day, while mouse in vehicle-group treated with PBS. Animals were sacrificed after five doses of verteporfin and tumor volumes were measured (Fig. 2A). The verteporfin-treated mice generated tumors were dramatically smaller than the tumors present in vehicle-group mice (Fig. 2B and C). The tumors were formalin-fixed and paraffin-embedded and tumor tissue sections were analyzed by IHC. The positive number of Ki67+ cells revealed verteporfin treatment significantly suppressed the proliferation of the implanted tumors (Fig. 2D and E). In a word, the data indicated that VP can inhibit proliferation and growth of papillary thyroid cancer in vitro and in vivo. 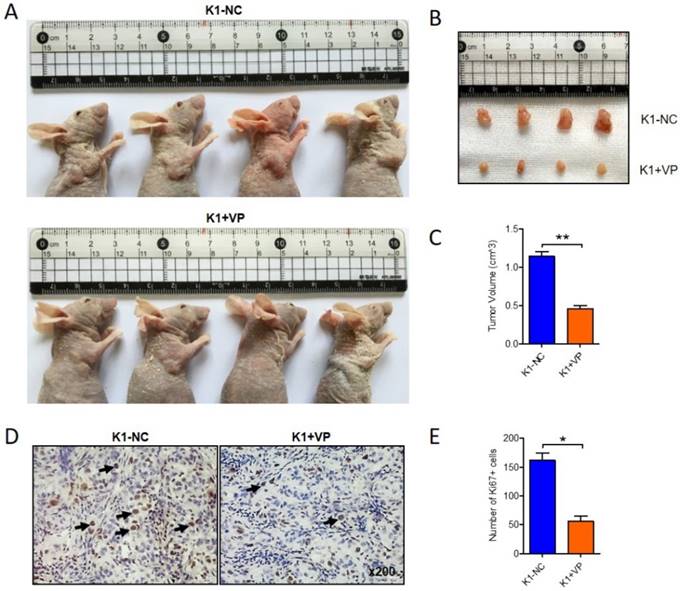 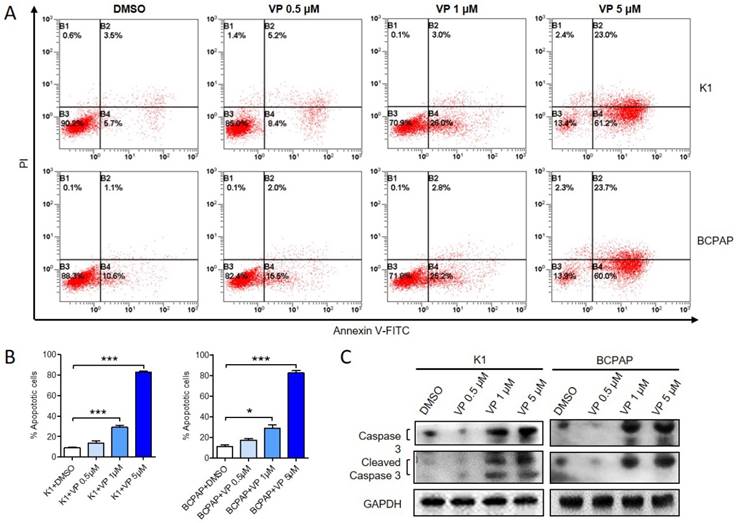 Verteporfin is known as a YAP1 inhibitor, independent of light activation [10]. Here, we accessed the expression level of YAP1 in treated K1 and BCPAP cells. As shown in Fig. 5A and B, both mRNA and protein level of YAP1 in K1 and BCPAP cells dramatically decreased after 1 μM verteporfin treatment. To further explore the underlying signaling involved in the inhibitory effect of verteporfin on thyroid cancer cells, we treated the cells with U0126, a MEK inhibitor, and examined the expression of protein involved in ERK1/2 signaling pathway. The results revealed that the total ERK1/2 and MEK did not change with the treatment of U126, while phosphorylated ERK1/2 and MEK significantly declined in 1 μM verteporfin treated K1 and BCPAP cells. These data suggested that verteporfin exhibit inhibitory effect on PTC cells partly through ERK1/2 signaling pathway.

Cell cycle inhibition of PTC cells with verteporfin treatment. K1 and BCPAP were treated with 0.5 μM, 1 μM or 5 μM verteporfin or DMSO. (A) Cell cycle distributions of the treated cells were analyzed by flow cytometry. (B) Cells of G0/G1, G1/S, G2/M phase were quantified in treated cells. The results are presented as the mean ± SEM from three independent experiments. (C) Expression of cyclin A2 and p21 were detected in the treated cells using WB. (*P<0.05, **P<0.01). 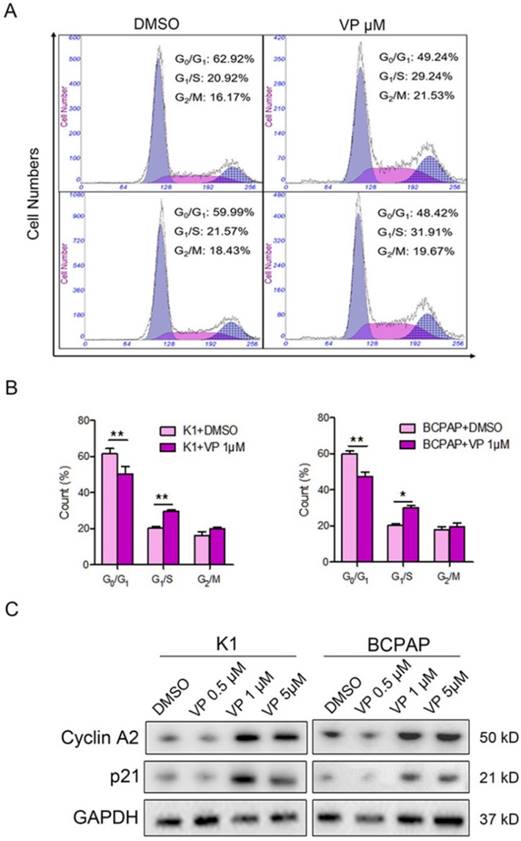 Verteporfin-induced proliferation suppression and cell cycle arrest via ERK1/2 and MEK. 1 μM verteporfin treatment decreased YAP1 expression in both protein (A) and gene level (B). qPCR results were normalized to β-actin mRNA expression. (C) Treatment of U0126 suppressed the expression of phosphorylated ERK1/2 and MEK in verteporfin-treated K1 and BCPAP cells. (**P<0.01). All the experiments were performed in triplicate. 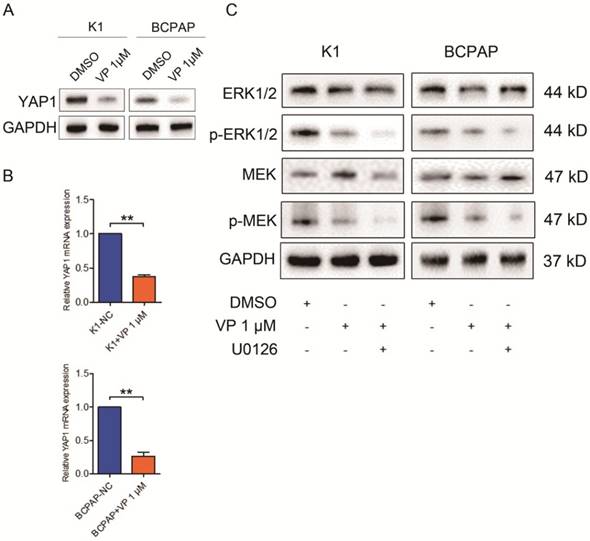 Verteporfin is a second-generation photosensitizer that has been reported to be a candidate of photodynamic therapy for the management of vertebral breast metastases [5] and locally advanced pancreatic cancer [6]. However, there are rare reports about the effect of verteporfin on papillary thyroid cancer and the underlying mechanism. In this study, we displayed verteporfin exhibited inhibitory effect on proliferation and cell cycle, and induced apoptosis of thyroid cancer cells in vitro, and it could also suppress thyroid cancer xenograft growth in vivo. Our finding indicated that verteporfin may be a therapeutic target to treat thyroid cancer.

After the first preliminary clinical study reported for the treatment of skin cancer [11], accumulating evidences have proved that verteporfin is a promising anti-tumor drug against multiple types of solid cancers. Liu-Chittenden Yi et al. group have identified that verteporfin as a small molecule can inhibit the interactions of YAP-TEAD and prevents YAP1-induced oncogenic growth by binding to YAP1 and changing its conformation, thereby abrogating its interaction with TEAD2 [12]. In our previous study, we covered that YAP1 played a vital role as an oncogene on the tumorigenicity of PTC [9]. To explore the effect of verteporfin on PTC, we complement the data and confirm its inhibitory effect on PTC oncogenesis in current study. YAP1 expression level in PTC cells decreased with the treatment of 1μM verteporfin, which make us speculate that the inhibitory effect of verteporfin may result from its disrupting YAP1's function in PTC.

Cell viability was examined using the Cell Counting Kit-8 (CCK8; Dojindo Molecular Technologies, Gaithersburg, Maryland, USA). In brief, BCPAP and K1 cells were treated with DMSO or VP with a dose of 0.5μM, 1μM or 5μM. The treated cells were seeded into 96-well plates at 4×103 cells/well. An aliquot of 10 μl CCK-8 solution was added into each well, and then was incubated for 4 h at 37 °C. At the indicated time points, the absorbance at 450 nm was measured using a spectrophotometer. For each group, data from five wells were pooled.

Apoptotic cells were accessed by flow cytometric analysis of Annexin V-FITC/PI staining (BD Biosciences, Mississauga, ON). The cells were cultivated in different concentrations of VP for 48 h, and then trypsined and washed. Resuspended cells were stained with 5 μl Annexin V-FITC and 10 μl PI at room temperature for 15 min (Biovision, CA, USA). After incubation, the cells were then analyzed by flow cytometry immediately. Apoptotic cells were marked based on Annexin V expression (Annexin V+/PI- and Annexin V+/PI+), quantified and compared to the controls from each group. Data from independent triplicate experiments were calculated to analyze the number of apoptotic cells.

In order to synchronize the cell cycle, cells were harvested in ice-cold PBS, and fixed in ice-cold 70% ethanol. The fixed cells were then resuspended in cold PBS. RNAase (2μg/ml) was added and incubated at 37°C for 30 min, followed by cultivation in 400 μl propidium iodide (PI, 10 μg/ml) for 40 min at room temperature. The DNA content was determined by a FACS Calibur flow cytometer and the cells in different phase of G0, G1, S, M were analyzed. All experiments were performed in triplicates.

Five weeks old BALB/c nude mice (4 mice/group) were obtained from the Shanghai experimental animal center (Shanghai, China). Briefly, 1x107 K1 cells were subcutaneously injected into the right back skin area of BALB/c nude mice. The size of tumors was measured by vernier caliper once a week. After 14 days, the tumors were constructed, mice were administered intraperitoneally with VP at a dose of 100 mg/kg every 3 day whereas control mice were injected with equivalent PBS. After 5 dose of VP, mice were sacrificed, and tumor tissues were collected, photographed and weighted. Paraffin-embedded tissues were sectioned for immunohistochemistry of Ki-67 (Santa Cruz Biotechnology). Animal experiments have been pre-approved by the Shanghai Cancer Center, Fudan University and all the procedures were in accordance with the National Institutes of Health Guide for the Care and Use of Laboratory Animals.

Immunohistochemical staining was performed according to procedures as described previously. In brief, formalin-fixed and paraffin-embedded tissue sections were deparaffinized in xylene and hydrated through descending concentrations of ethanol before being placed in blocking solution to inhibit endogenous peroxidase activity. The slides were incubated with primary antibody at 4°C overnight. A HRP-conjugated rabbit or mouse secondary antibody was added for 60 min at room temperature, followed by 3,3′-diaminobenzidine (DAB) development. Slides were fixed and images obtained with the Olympus IX71 inverted microscope using the DP2-BSW Olympus image acquisition software system. The results were confirmed by two experienced pathologists who were blinded to the clinic pathologic data of the patients. We took 5 visual field per section and number of Ki67 positive cells in each field were calculated to analyze the average of positive Ki67 cells in each group.

Statistical analysis was performed with GraphPad Prism 5.1. For comparison among the groups, Student's t test, one-way ANOVA and two-way ANOVA were performed, and P<0.05 was defined as statistically significant. The data and error bars report the mean ± SEM. All the experiments were repeated at least three times.

The authors would like to thank University of Colorado Cancer Center Cell Bank for providing PTC cell line K1.

This work was partly supported by funds from The Project Sponsored by the Scientific Research Foundation for the Returned Overseas Chinese Scholars, State Education Ministry (to Tian LIAO), the National Natural Science Foundation of China (81272934, 81572622, 81772854 to Qing-Hai JI, 81702753 to Tian LIAO), the Shanghai Science and Technology Commission Western Guide project (14411962402 to Duan-Shu LI), the Shanghai municipal planning commission of science and research fund for young scholar (20154Y0050 to Jun Xiang).

T.L., W.J.W. and J.Q.H performed all experiments, B.M and Y.M.C performed statistical analysis, D.W., N.Q. and R.L.S prepared figures, G.H.S, Y.X.Z., D.S.L and Q.H.J designed the experiments, T.L. wrote the manuscript. All authors were involved in writing the paper and had final approval of the submitted manuscript.