Bladder cancer is a common urological carcinoma and its incidence is rising in recent years [1]. Change of molecular markers influences the prognosis of bladder cancer [2-4]. Despite significant advances in therapies including surgery and chemotherapy in the past decade, poor survival of invasive bladder cancer made us to seek for more effective treatments. Thus it is important to clarify molecular mechanisms underlying the development of bladder cancer aggressiveness and drug resistance, which could be used for development of new therapy.

Downregulation of LASS2 has been found in various cancers including breast cancer [5], prostate cancer [6] and hepatocellular carcinoma [7]. LASS2 could enhance chemosensitivity of breast cancer through inhibition of V-ATPase proton pump activity and IAP signaling pathway [8]. Previously we reported that LASS2 negatively associated with poor clinical prognosis in bladder cancer patients [9]. LASS2 loss also leads to proliferation and invasion in bladder cancer cells [10]. Moreover, we demonstrated that LASS2 silenced enhances chemoresistance and V-ATPase activity in bladder cancer cells [11, 12]. A recent report demonstrated that liver-specific deletion of LASS2 delayed regeneration of mouse liver after partial hepatectomy with upregulation of cyclin A, CDK2 and p-Rb [13]. In addition, combination of LASS2 and TGF-β1 was an independent and significant risk factor for overall survival and time to recurrence in patients with hepatocellular carcinoma [14]. To date, the mechanism by which LASS2 attenuated bladder cancer invasion and chemoresistance has not been fully explored yet.

The mitochondrial system is highly evolved and controls energy production and distribution based on the availability of calories and oxygen[15]. Mitochondria play vital roles in many cellular processes including cell proliferation, metabolism and apoptosis. Mitochondrial dymamic is characterized by fission and fusion. Mounting evidence suggests that altered mitochondrial dynamics has been implicated in many human diseases. Altered balance of mitochondrial fission or fusion contributes to the development and progression of human cancers [16]. Recent reports suggested that cancer cells exhibited excess mitochondrial fission and impaired mitochondrial fusion due to an imbalance of Drp1/Mfn expression, which in turn influence cell cycle transition [17]. Additionally, it was reported that mitochondial dynamics play critical roles in metastasis of breast cancer[18].

In the present study, we linked the role of LASS2 with mitochondrial function. We demonstrated that LASS2 was able to induced mitochondrial fusion through inhibition of ERK/DRP1 signaling, which in turn reduces cancer invasion and chemoresistance.

Cell invasion assay was performed using a transwell chamber coated with Matrigel from BD Bioscience. Cells were suspended in 100 µl of serum-free medium and transferred to the upper chamber and incubated for 20 hours. Medium with 15% FBS was added to the lower chamber. The non-invading cells in the upper chambers were removed by a cotton tip. Cells passed through the filter were fixed, stained with hematoxylin and counted under microscope.

CCK8 assay was performed to detect relative cell viability using Cell Counting Kit-8 kit from Dojindo (Dojindo, Gaithersburg, MD) according to the manufacturer's protocol. Briefly, cultured cells were incubated with 10 μl/well of CCK-8 solution for 4 hours in the incubator. Then each well was measured at the wave length of 490 nm.

SPSS 17.0 was used for analysis. t-test was used to compare data. p<0.05 was considered to be statistical significant.

We examined the expression of LASS2 protein expression in normal uroepithelial cell line SV-HUC-1 and 4 bladder cancer cell lines (BIU87, J82, 5637 and T24). As shown in Figure 1A, 5637 showed the relative higher LASS2 expression. LASS2 expression in normal SV-HUC-1 was higher than the other 3 cell lines. We transfected LASS2 plasmid in J82 and BIU87 cells and depleted LASS2 in 5637 cells by siRNA. The transfection efficiency was confirmed as shown in Figure 1B. The effects of LASS2 overexpression has not been validated before in bladder cancer cells. Then we examined the change of invasion and chemoresistance. Matrigel invasion assay was used to examine the change of invading ability. We found that forced expression of LASS2 significantly decreased invading cell number in both BIU87 and J82 cells. Accordingly, LASS2 depletion in 5637 cells facilitated cell invasion (Figure 2A).

1μM doxorubicin (DOX) was used to treat bladder cancer cells. CCK-8 analysis and Annexin V/PI staining were used to check the change of cell viability and apoptosis. As shown in Figure 2B, LASS2 overexpression impaired cell viability of J82 and BIU87 cells treated with doxorubicin for 24 and 48 hours. In contrast, LASS2 depletion in 5637 cells enhanced cell viability after DOX treatment. Annexin V/PI staining demonstrated that after 24 hours DOX treatment, the rates of apoptosis in BIU87 and J82 cells were significantly increased after LASS2 overexpression (Figure 2C). While the rate of apoptosis in 5637 cells transfected with LASS2 siRNA was lower than that of control cells. In addition, we found that cytochrome c and cleaved caspase 3 were significant upregulated after LASS2 overexpression while its depletion showed the opposite effects (Figure S1). These results above demonstrated LASS2 overexpression inhibits invasion and chemoresistance in bladder cancer cells. 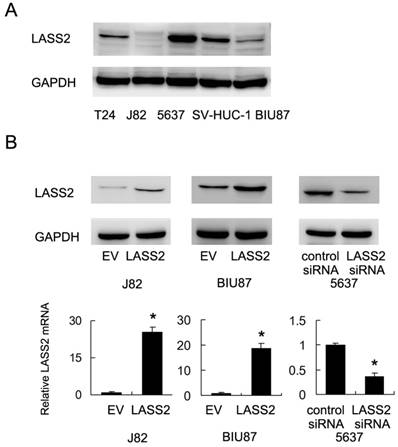 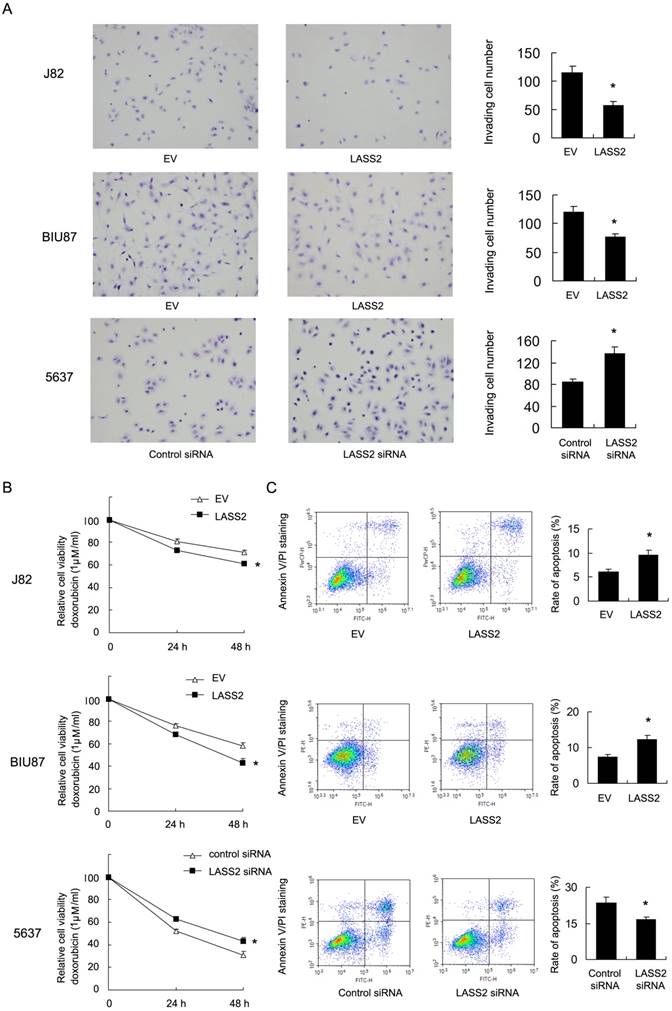 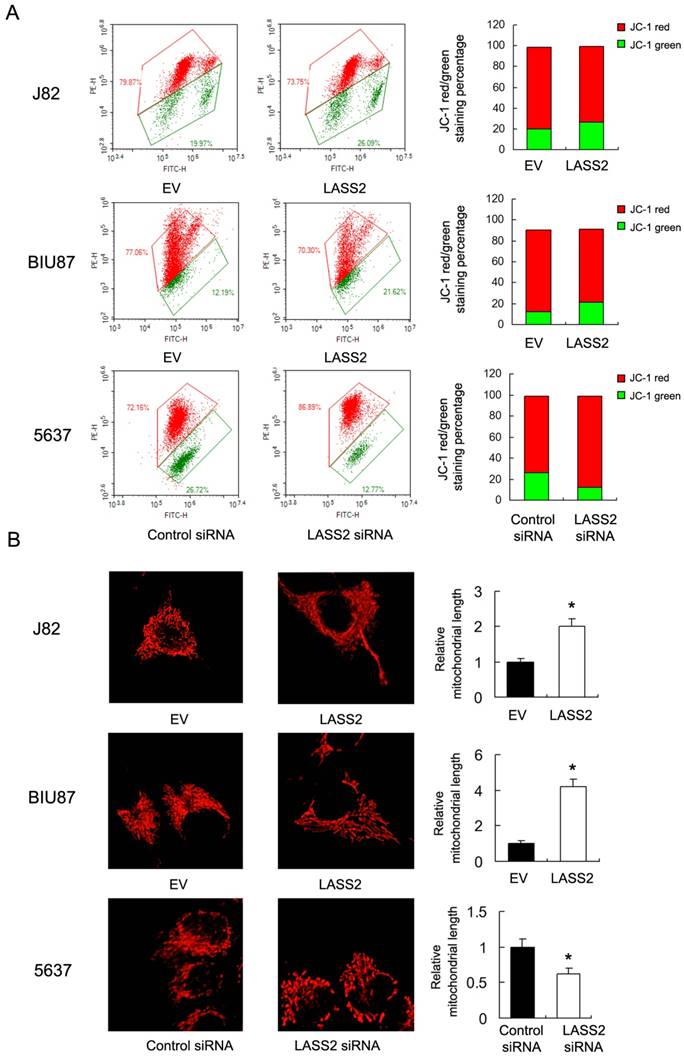 To investigate the mechanisms underlying mitochondrial function regulated by LASS2, we examine proteins that directly regulate mitochondrial dynamics including p-Drp1, Drp1 and Fis1. Upregulation of p-Drp1 and Fis1 induces mitochondrial fission, which has been shown in inducing cancer cell invasion. As shown in Figure 4, we demonstrated that LASS2 overexpression downregulated the expression of p-Drp1 as well as Drp1, Fis1 in BIU87 and J82 cells. While LASS2 depletion upregulated these proteins.

To validate the involvement of mitochondrial fission/fusion balance and Drp1 signaling in LASS2 controlled invasion and chemoresistance, we adopted Mdivi-1, a specific blocker of Drp1 signaling, to treat 5637 cells. As shown in Figure 5A, Mdivi-1 treatment induced mitochondrial fusion, which reversed the role of LASS2 siRNA. We also found that Mdivi-1 reduced invading cell number and upregulated the percentage of apoptosis, abrogated the biological effects of LASS2 siRNA in 5637 cells (Figure 5B), which validated the involvement of Drp1/mitochondrial dynamics. 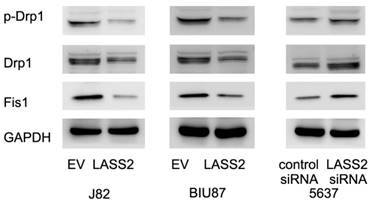 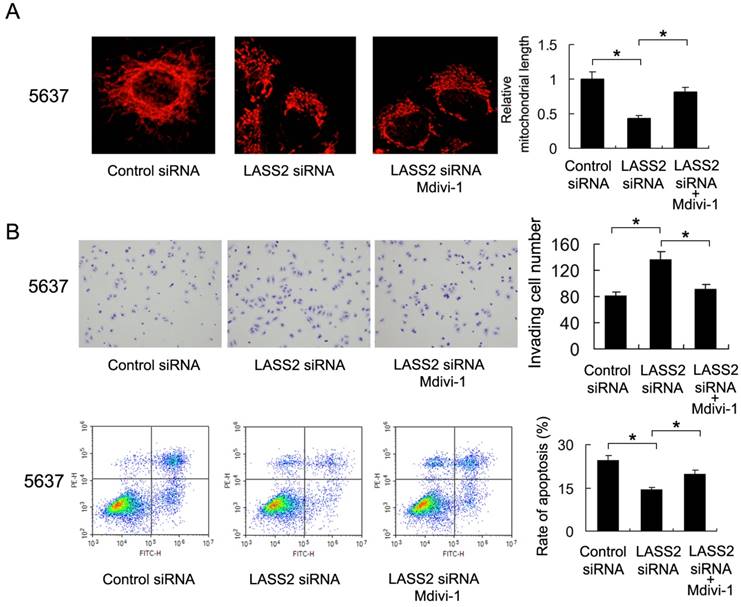 To further examine the possible mechanism of LASS2 suppressed Drp1 signaling. We profiled the expression of established pathways related with invasion and chemoresistance. Previous studies have reported that Drp1 was a downstream target of ERK signal pathway, which could phosphorylated Drp1 at S616. Here, we found that LASS2 was able to inhibit ERK phosphorylation and LASS2 depletion upregulated ERK phosphorylation. Treatment with MEK/ERK inhibitor PD98059 in 5637 cells abolished the effect of LASS2 depletion on p-Drp1(Figure 6). To exclude the off-target effect of siRNA. We also used a second siRNA to repeat the above findings. As shown in Figure S2, LASS2 siRNA2 upregulated p-Drp1 and p-ERK signaling in 5637 cell line. 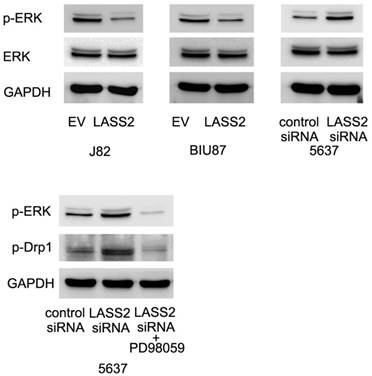 Growing evidences suggest LASS2 as an important tumor suppressor downregulated in various cancers including breast [5], prostate [6] and liver cancer [7]. Our previous study reported that LASS2 negatively associated with poor clinical prognosis in bladder cancer patients [9]. Functional study was carried by LASS2 siRNA. We showed that its loss leads to proliferation and invasion, with elevated chemoresistance and V-ATPase activity in bladder cancer cells[10-12]. However, the mechanism by which LASS2 affects bladder cancer invasion and chemoresistance has not been fully identified yet.

In this study, we also demonstrated that ERK inhibition is partly responsible for the downregulation of Drp1 signaling. ERK is well-known for its role in cancer invasion and apoptosis. ERK could activate Drp1 phosphorylation during reprogramming of stem cell to pluripotency [32]. It is reported that bone marrow-derived mesenchymal stem cells activates ERK signaling, which in turn phosphorylated pro-fission factor Drp1 at residue S616 and promotes cancer chemoresistance [33]. These reports support our hypothesis that LASS2 inhibits Drp1 signaling and chemoresistance through blockage of ERK pathway.