Cancer cells prefer to obtain energy from aerobic glycolysis [1-3], which produces more lactate but less ATP, a phenomenon called “Warburg effect”. The conversion from glucose to lactate in the presence of oxygen facilitates proliferation, migration and invasion of cancer cells [2, 4, 5]. Consequently, the amount of lactate produced in the microenvironment is closely correlated with tumor malignancy, and lactate promotes the survival of tumor cells by decreasing the oxidative stress via consuming the reactive oxygen species [4, 6, 7].

Glioblastoma (GBM) is the most common and aggressive primary human brain tumor with high mortality [8]. The survival of GBM patients has not been significantly prolonged despite of significant progress in therapeutic strategies, such as surgical practices, new radiotherapy techniques and molecule-targeted therapies [9, 10]. Although GBM is highly-vascularized [11], bevacizumab, an antibody targeting vascular endothelial growth factor (VEGF), failed to improve the survival of GBM patients partially due to the induction of metabolic switch toward glycolysis in GBM cells [12]. In addition, several key glycolytic effectors, such as glucose transporter 1 (Glut1), hexokinase 2 (HK2), pyruvate kinase 2 (PKM2) and lactate dehydrogenase A (LDHA), are aberrantly expressed in glioma cells and play vital roles in tumorigenesis [5,13]. Thus, clarification of the regulatory molecules of glycolysis is important for understanding the mechanism of GBM progression and exploring new targeted therapeutic strategies for GBM.

The long non-coding RNAs are RNA molecules over 200 nucleotides in length [14], and involved in multiple physiological and pathological processes, including carcinogenesis [15, 16]. Large intergenic non-coding RNA-RoR (LincRNA-RoR) was firstly identified and characterized in induced pluripotent stem cells and human embryonic stem cell by microarray screening and functional validation [17, 18]. Altered expression of LincRNA-RoR has also been shown to mediate various cellular processes in cancer cells, including proliferation, metastasis, invasion and apoptosis [19]. However, the regulation of glucose metabolism by LincRNA-RoR in cancer cells has not been explored.

Ten fresh GBM tumor specimens and the matching non-tumor tissues were collected by surgery from Department of Neurosurgery, Southwest Hospital, Third Military Medical University (TMMU). Written informed consents were obtained from the patients or their guardians. All patients had not received radiotherapy or chemotherapy before surgery. All the experimental procedures regarding human subjects had been approved by the ethics committees of the Third Military Medical University.

The human LincRNA-RoR overexpression lentiviral vector and its negative control vector were purchased from GenePharma (Shanghai, China). Cells were infected with lentivirus in the presence of 8 μg/ml polybrene.

QuantiChromTM Glucose Assay Kit (DIGL-100) and EnzyChromTM L-Lactate Assay Kit (ECLC-100) were obtained from BioAssay Systems (Hayward, CA). ATP Assay Kit (S0026) was purchased from Beyotime (Shanghai, China). Briefly, cells were plated in 12-well culture dishes, and the culture medium was replaced with FBS-free DMEM 24 hrs later. After cultured for additional 24 hrs, glucose and lactate assays were performed with culture media collected from each sample according to the manufacturer's instructions. ATP assay was conducted on the cultured cells according to the manufacturer's protocol.

The cell proliferation was assessed by using Cell Counting Kit (CCK-8) (C0038, Beyotime). Briefly, cells were seeded in a 96-well plate at a density of 1.5×103 cells/well. CCK8 was added to each well every 24 hrs for up to 4 days. The light absorbance was then measured at a wavelength of 450 nm.

For evaluation of tumor growth in vivo, 1×106 U87 cells were injected subcutaneously into 5-week-old male BALB/c nude mice. Four weeks later, tumor volume was calculated by the formula V= ab2/2 (a: tumor length, b: tumor width). The animal experiments were approved by the Institutional Animal Care and Use Committee of Southwest Hospital, Third Military Medical University in accordance with the Guide for the Care and Use of Laboratory Animals.

HE and immunohistochemistry staining

All experiments were performed at least in triplicates and representative data were shown. The unpaired two-group comparison and multiple comparisons were made with Student's t test or one-way ANOVA, respectively. Data were presented as the mean ± SD. P < 0.05 (*) and P < 0.01 (**) were considered statistically significant. 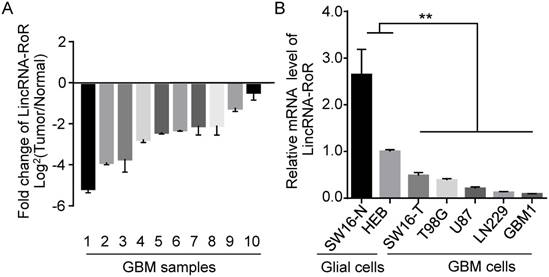 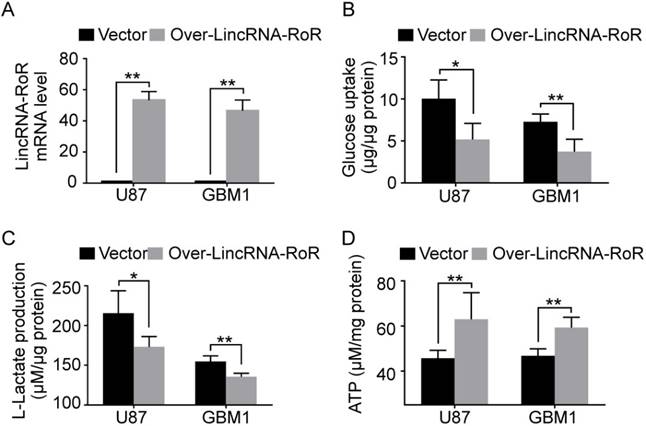 LincRNA-RoR inhibits the expression of Rictor, p-Akt and glycolytic molecules to suppress the proliferation of GBM cells

The molecular mechanisms on the regulation of glucose metabolism by LincRNA-RoR were also investigated. mTORC2 has been reported as an important regulator of Akt activation and plays pivotal role in cancer metabolism [23, 24]. Rictor is the key component of mTORC2 [25]. Of note, mTORC2 activity is significantly elevated and exerts oncogenic function in glioma cells [26]. We thus investigated whether LincRNA-RoR could regulate mTORC2. Our results revealed that LincRNA-RoR overexpression reduced the level of Rictor and attenuated the phosphorylation of Akt (Ser473) (Figure 3A). The important downstream molecules of Akt pathway, p-mTOR (Ser2448) and p-S6 (Ser235/236), were also decreased upon LincRNA-RoR overexpression (Figure 3A). Moreover, the expression of glycolytic effectors, including Glut1, HK2, PKM2 and LDHA, was remarkably decreased in LincRNA-RoR-overexpressed GBM cells in comparison with their control counterparts (Figure 3A). Functionally, LincRNA-RoR overexpression suppressed the proliferation (Figure 3B) of GBM cells in vitro. These results indicate that LincRNA-RoR inhibits proliferation of GBM cells through Rictor/Akt pathway.

Furthermore, we investigated the effect of LincRNA-RoR on tumorigenesis of GBM cells. As shown in Figure 4A, the weight and volume of the xenografts with LincRNA-RoR overexpression were dramatically reduced compared with control xenografts. Meanwhile, the percentage of Ki67 positive cells was significantly decreased in LincRNA-RoR overexpression xenografts (Figure 4B). Additionally, down-regulation of Glut1, HK2, PKM2, LHDA, Rictor, p-Akt (Ser473), p-mTOR (Ser2448) and p-S6 (Ser235/236) was observed in the xenografts derived from LincRNA-RoR-overexpressed cells as compared with that derived from control cells (Figure 5A, B, C and Figure 6A, B), demonstrating that LincRNA-RoR might inhibit tumor growth via suppressing tumor glycolysis. 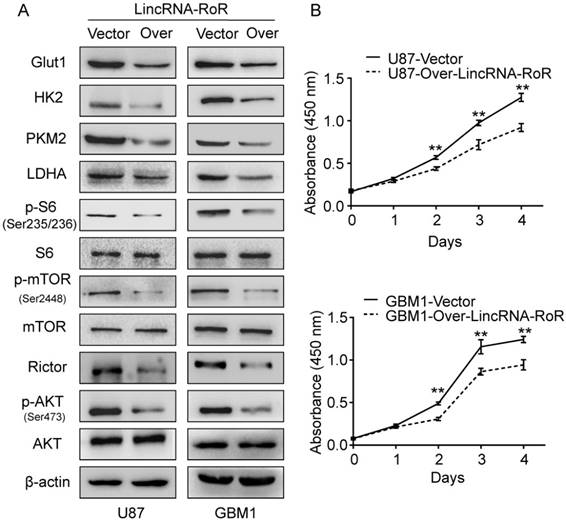 LincRNA-RoR restrains GBM tumor growth in vivo. (A) The gross and HE staining images of xenografts derived from LincRNA-RoR-overexpression U87 cells and its control counterparts. Tumor volumes were calculated by ab2/2. a = length. b = width. Both tumor volumes and tumor weight were significantly decreased in LincRNA-RoR-overexpression groups. (B) The expression of Ki67 (Brown staining) was analyzed by immunohistochemistry. Scale bar represents 100 μm. Data are represented as means ± SD of each group. *P<0.05. 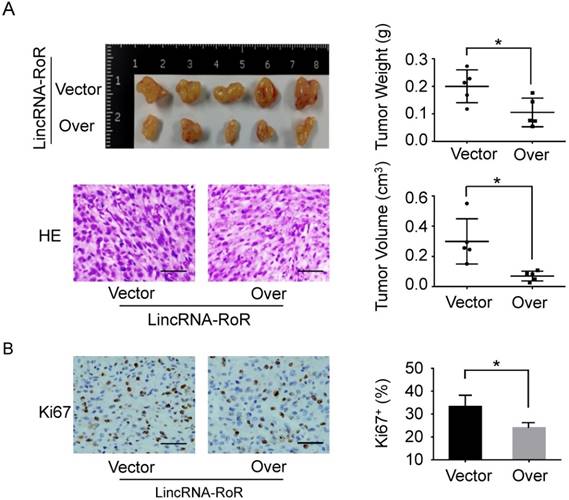 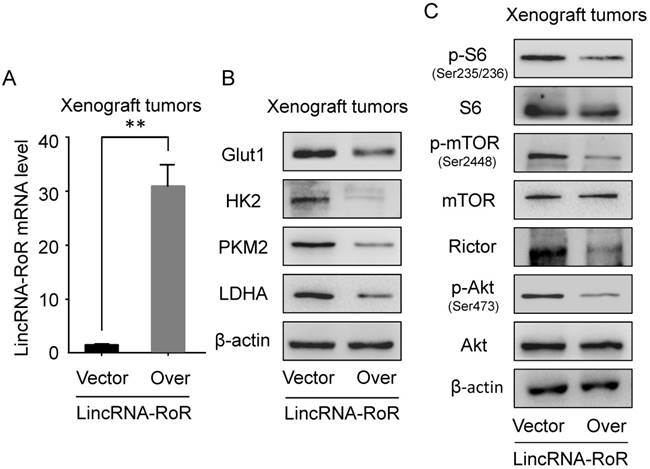 GBM cells prefer to acquire energy from glycolysis instead of oxidative phosphorylation. Targeting glycolysis is proposed as a promising therapeutic strategy for GBM treatment [13, 27, 28]. Our results for the first time showed that LincRNA-RoR inhibited the expression of Rictor, reduced the activity of Akt, and impaired the expression of glycolytic molecules, by which the proliferation of GBM cells was restrained (Figure 7B). These data revealed LincRNA-RoR as a new suppressor of GBM aerobic glycolysis with therapeutic potential.

In glioma, Akt activation has been proved to be tightly correlated with tumor malignancy, including drug-resistant and tumor progression [29-32]. Akt inhibitor shows anticancer and radiosensitizing effects in malignant glioma cells [33], implying that targeting key regulators controlling Akt signaling activity might disrupt the malignant behaviors of gliomas. Previous studies have demonstrated that Akt activity is tightly regulated by mTORC2, which responds to growth factor and functions as a major activator of Akt [24]. However, the mechanisms on mTORC2 regulation in gliomas are still poorly understood. In this study, we identified LincRNA-RoR as an important negative regulator of mTORC2-Akt signaling. The data showed that LincRNA-RoR impaired the expression of Rictor, an important component of mTORC2 complex, and thus interrupted mTORC2 function followed by inhibition of Akt activity, which functionally disrupted aerobic glycolysis in GBM cells. Our finding is in consistent with previous studies showing that upregulated Rictor expression and mTORC2 activity in glioma promotes cell growth and motility [26], underscoring the important role of this signaling pathway in glioma progression.

Akt stimulates aerobic glycolysis in cancer cells [34]. Several glycolytic effectors, such as Glut1, HK2, PKM2 and LDHA, are aberrantly expressed in glioma, and play vital roles in tumorigenesis [5, 35]. Glut1 has been identified as one of the proteins that are up-regulated in GBM to enhance the “Warburg effect”, especially in hypoxic microenvironments [36]. HK2 is the first key enzyme of glycolysis. Depletion of HK2 in GBM cells can restore oxidative glucose metabolism and increase sensitivity to cell death inducers, such as radiation and temozolomide [26]. Pyruvate kinase is an important enzyme of glycolysis by transferring the phosphoryl group of phosphoenolpyruvate (PEP) onto ADP to form ATP and pyruvate.

Immunostaining of Glut1, HK2, PKM2, LDHA, p-Akt and Rictor in xenograft tumors in presence of LincRNA-RoR. (A) The expression of Glut1, HK2, PKM2, LDHA as well as (B) p-Akt and Rictor were analyzed by immunohistochemistry. Mean density was calculated by Image Pro-plus software. Scale bar represents 100 μm. Data are represented as means ± SD of each group. *P <0.05, **P <0.01. 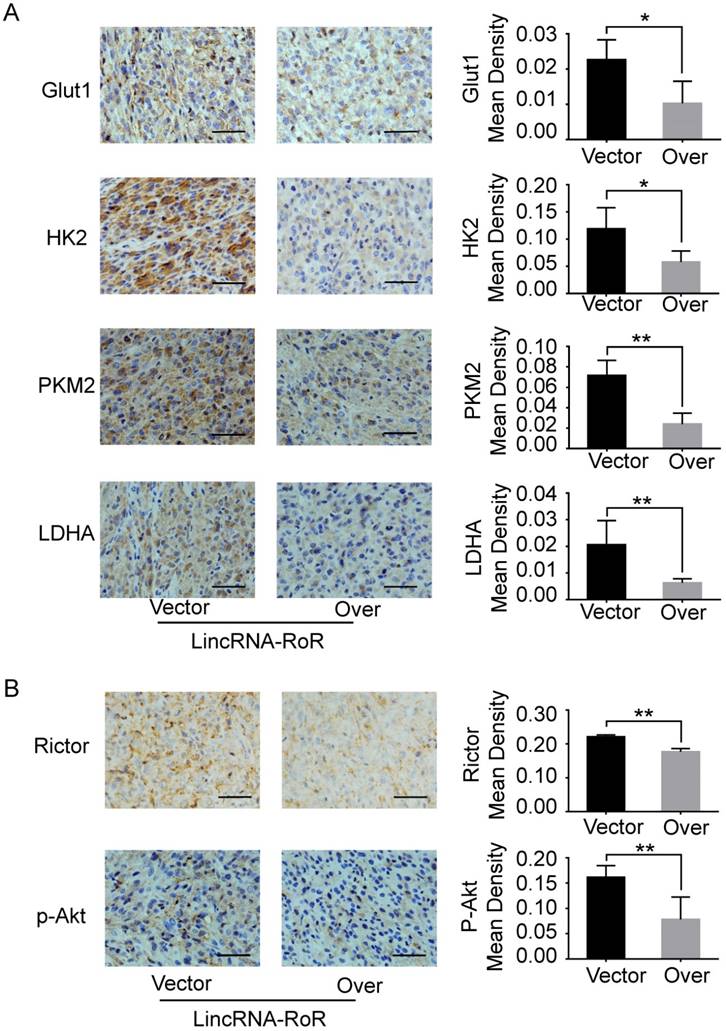 Schematic presentation shows the effect of LincRNA-RoR on aerobic glycolysis of GBM cells. 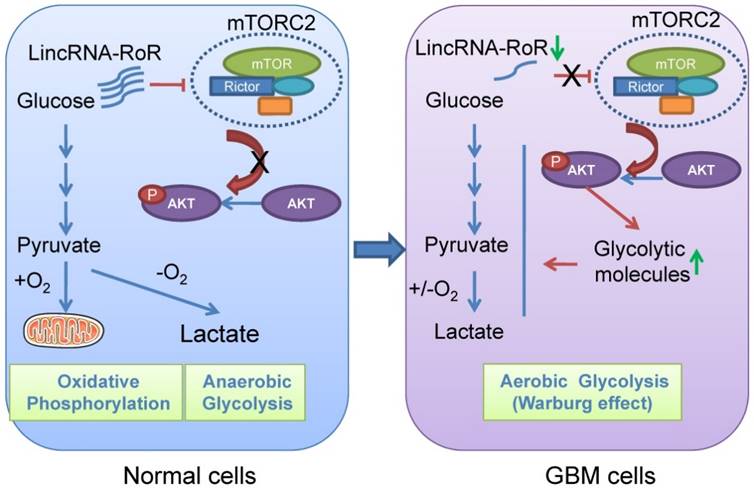 In glioma, PKM2 expression is up-regulated in a grade-specific manner and loss of PKM2 results in cell death [37, 38]. Meanwhile, PKM2 dephosphorylation by Cdc25A promotes the “Warburg effect” and tumorigenesis [39]. LDHA catalyzes the conversion of pyruvate to lactate and is considered to be a key checkpoint of anaerobic glycolysis [3]. Our results show that LincRNA-RoR overexpression inhibits the growth of GBM xenografts with the decreased expression of Glut1, HK2, PKM2 and LDHA, suggesting that LincRNA-RoR could be used as a potential therapeutic target for GBM.

We also determined the inhibition of aerobic glycolysis in GBM cells by LincRNA-RoR through measuring glucose and L-lactate in the medium, total ATP, and a panel of glycolytic effectors in the cells, which are known parameters in the literature reflect the status of cell glycometabolism [7, 28]. However, we wished to mention that the amount of glycolysis related-metabolites and the glucose flux might provide another set of evidence to confirm the inhibitory effects of LincRNA-RoR on glycolysis.

This research was supported by grants from China National Science and Technology Major Project (2016YFA0101203).