Pancreatic cancer is a common highly malignant tumor with a 5-year survival rate of only 3% to 6%, ranking as the 4th most common cause of cancer-related death in the United States. Up to 85.3% of deaths occur among newly diagnosed cases, ranking the first among all common malignant tumors [1]. In China, the incidence of pancreatic cancer is increasing by 2.3% each year, and the patients show a younger-age trend [2]. The prognosis of pancreatic cancer is very poor and more than 80% patients are in an advanced stage when they are diagnosed [3]. The opportunity for possibly curative radical surgery is lost owing to vascular invasion or distant metastasis. Further exploration of the mechanism of pancreatic cancer has important clinical significance to improve patient survival and quality of life.

CD36 is a member of the B class scavenger receptor family. It is a transmembrane glycoprotein receptor and is expressed on the surface of cells such as platelets [4], capillary endothelial cells [5], and macrophages [6]. As a cell surface receptor, CD36 can combine with ligands such as lipoproteins, serine phospholipids, and thrombospondin-1 (TSP1) to perform different functions [7, 8]. CD36 is involved in the processes of lipid metabolism, long chain fatty acid adsorption, cell apoptosis clearing, and macrophage phagocytosis [9, 10]. A concentrated study of its expression regulation in the past suggested it may be a key factor in the formation of macrophage foam and atherosclerosis [11, 12]. However, recent studies found that CD36 also plays a key role in the occurrence and development of tumors, especially in the invasive capacity of metastatic tumors.

The studies conducted by the Spanish scientist Gloria Pascual et al. found that CD36 is a common marker of metastatic cells and is currently the first marker of metastatic specificity. Metastases of melanoma, breast cancer, ovarian cancer, bladder cancer, and lung cancer cells are dependent on CD36 [13]. In addition, studies report that CD36 plays an important role in tumor angiogenesis, epithelial stromal transformation, and other processes. The role of CD36 in tumors has attracted researchers' attention. However, the expression and role of CD36 has not been reported in pancreatic cancer. This study further explored the expression of CD36 in pancreatic cancer and corresponding non-tumor normal tissues and its correlation with clinicopathological features and the prognosis of pancreatic cancer, with the goal of understanding its role in the development and progression of pancreatic cancer.

140 formalin-fixed and paraffin-embedded pancreatic ductal adenocarcinoma and adjacent normal pancreatic tissue specimens were obtained from pancreatic cancer patients between 2012 and 2015. The research protocol was reviewed and approved by the Research Ethics Committee of Sir Run Run Shaw Hospital, School of Medicine, Zhejiang University. All participants or their guardians gave written consent of their tissue samples and medical information to be used for scientific research. All cases were confirmed by pathological diagnosis and were analyzed according to 8th edition of UICC 2017 TNM classification. Immunohistochemical analyses of these specimens were conducted with anti-CD36 (ab133625; Abcam, 1:100) antibodies as described previously.

Cells were lysed with RIPA buffer (Sigma, St.Louis, MO, USA) containing a mixture of protease inhibitor cocktail kit (Thermo, Rockford, IL, USA). Then the lysates were cleared by centrifugation and the concentrations of proteins were measured by BCA protein assay kit (Pierce, USA). The proteins were denatured in 2× SDS buffer at 95°C, separated in 10% SDS-polyacrylamide gel electrophoresis (SDS-PAGE) and transferred onto polyvinylidene difluoride (PVDF) membrane (Millipore, Bedford, MA, USA). After being blocked with 5% skim milk powder for 1 h at room temperature, the membranes were probed with the CD36 (ab133625; Abcam;1:1000) antibodies. The samples were incubated with the secondary goat anti-rabbit antibodies conjugated with horseradish peroxidase (1:5 000, Pierce, USA) for 1 h at room temperature. The blots were visualized by enhanced chemiluminescence using Kodak X-OMAT LS film (Eastman Kodak, Rochester, NY).

The data were compiled with the software package SPSS, version 19.0. Data were presented as mean±standard error (SE). Fisher's exact and χ2 tests were used to assess the associations between CD36 expressions and clinicopathological parameters. Univariate survival analysis was performed according to Kaplan-Meier, and differences in survival curves were assessed with the log-rank test. P value<0.05 was considered as statistically significance.

Expression of CD36 in pancreatic cancer cells and tissues 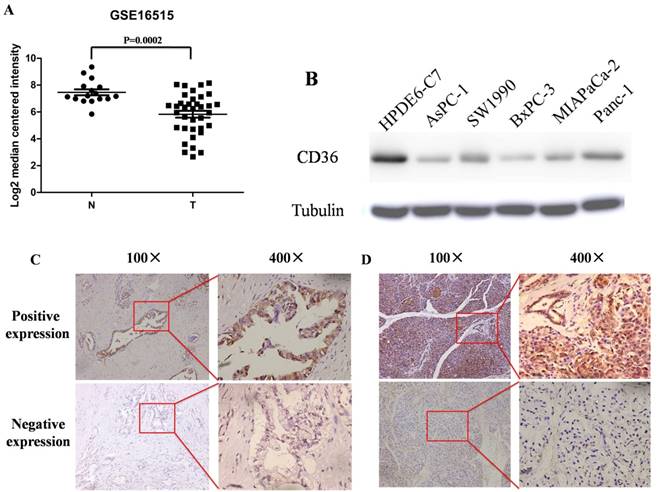 Relationship between CD36 expression and clinicopathological parameters in TCGA database

CD36 can combine with different ligands to perform different important functions. In recent years, the roles of CD36 in tumors have gradually been revealed, and especially in the metastasis of tumors, CD36 plays an important role. Nath et al. found that the CD36 signaling pathway promotes the uptake of fatty acids by hepatocellular carcinoma cells to drive epithelial mesenchymal transition in tumor cells, thus causing metastasis [17]. Thorne et al. stably transferred CD36 to MV3 melanoma cells without endogenous CD36 expression and found that expression of exogenous CD36 had no effect on the cell morphology and growth rate of MV3 melanoma cells, but their invasiveness increased [18]. According to the existing mechanism we may conclude that low expression of CD36 in pancreatic cancer is a protective factor. Interestingly, however, despite the CD36 negative expression indicates the lower TNM staging and lower CA19-9 expression levels, as well as previous studies have shown that over-expression of CD36 is associated with tumor progression, especially metastasis, this study first found that CD36 negative expression indicates a poor prognosis of survival, and confirmed by the TCGA database. This is in contradiction to what we have concluded earlier, and its further mechanism is still worth exploring.

In summary, our study found that the CD36 gene has a low expression level in pancreatic cancer. Low expression of CD36 predicts lower TNM staging and CA19-9 levels, but larger tumor size and poor survival prognosis. It can be used as a predictor of clinicopathological features and prognosis, but the contradiction is worthy of our further study.