Hepatocellular carcinoma (HCC) is the fourth leading cause of cancer related deaths in China [1]. Surgical resection is most effective treatment among the numerous therapeutic methods for HCC. However, due to the high rate of recurrence or metastasis (50-70% at 5 year) after surgery [2], hinders further improvements in HCC survival [3]. The identification of novel effective biomarkers to classify patients with low or high risk at survival and recurrence, would provide a guide to clinicians to select therapeutic strategies for each patients and provide personalized therapy according to the predicted risk of survival or recurrence [3-5].

Niemann-Pick C1-like 1 (NPC1L1) protein plays key rules in intestinal cholesterol absorption [6]. NPC1L1 is highly expressed in the human liver and intestine [6, 7]. In humans, it has been reported that ezetimibe, a cholesterol absorption inhibitor that may reduce plasma cholesterol by inhibiting NPC1L1 function in both intestine and liver, and hepatic NPC1L1 may have evolved to protect the body from excessive biliary loss of cholesterol [8]. NPC2 is a small secretory protein (molecular mass is 19-23kDa) which is widely expressed in the various body cells and specifically binds un-esterified sterols, and free cholesterol [9, 10].

Yamanashi et al. has been reported that, NPC1L1 down-regulates the expression and secretion of NPC2 by inhibiting its maturation and accelerating its degradation. They also proposed that NPC2 functions as a regulator of intracellular cholesterol trafficking and biliary cholesterol secretion. Therefore, in addition to its role in cholesterol re-uptake from the bile by hepatocytes, and hepatic NPC1L1 may control cholesterol homeostasis via the down-regulation of NPC2 [11].

Three hundred and twenty six HCC formalin-fixed paraffin-embedded (FFPE) specimens were selected randomly and diagnosed at the Eastern Hepatobiliary Surgery Hospital between Jan 2005 and Dec 2011, among which 61 HCC tumor cases with a paired peritumoral tissue was used as expression pattern cohort and 265 HCC tumor cases without a paired peritumoral tissue was used as prognosis cohort. Patients were followed-up until December 2014. For Western blot and Real-time Quantitative PCR analyses 10 paired HCC tissues and peritumoral liver tissues were obtained at same hospital between April 2017 and May 2017 (summarized in supplementary table S1).

The enrollment criteria for all patients used in the study were: (1) diagnosis was consistent with histological diagnostic criteria of WHO; (2) pathological diagnosis of hepatocellular lesions; (3) patient had not undergone pre-operative anti-cancer treatment and there was no evidence of extrahepatic metastases; and (4) complete follow-up data was available for prognosis cohort of 265 cases. Institutional review board approval and written informed consent from all patients were obtained. The OS was defined as the interval between surgery and death or the last observation taken. The time-to-recurrence (TTR) was defined as from the date of tumor resection until the detection of tumor recurrence, death or last observation. Patient follow-up was performed every 3 months during the first year after surgery and every 6 months thereafter until December 2014. Follow-up were performed by two physicians unaware of the study. All patients were monitored by abdomen ultrasonography, chest X-ray, and serum alpha fetoprotein (AFP) concentration 1-6 month during the first year after surgery and every 3-6 months thereafter. Computed tomography scanning or magnetic resonance imaging of the abdomen was performed every 6 months or immediately after a recurrence was suspected. The diagnosis criteria for recurrence were equal to that for the preoperative diagnosis. Hematoxylin and eosin (HE) stained slides were made from each FFPE tissue and were reviewed by two experienced hepatopathologists [12].

Tissue microarrays construction, IHC and integrated optical density (IOD) measurement performed as the method previously reported [12-14]. All patients of HE-stained slides were reviewed and identified by two experienced pathologists and the representative cores were pre-marked in the paraffin blocks. Tissue cylinders with a diameter of 1.0 mm were punched from the marked areas of each block and incorporated into a recipient paraffin block. Sections of 4 μm-thick were placed on slides coated with 3-aminopropyltriethoxysilane.

Paraffin sections were deparaffinized in xylene and rehydrated through decreasing concentrations of ethanol (100%, 95%, and 85% for 5 min each). Antigens were unmasked by microwave irradiation for 3 min in pH 6.0 citric buffer and cooled at room temperature for 60 min. Endogenous peroxidase activity was blocked by incubation of the slides in 3% H2O2/phosphate-buffered saline, and non-specific binding sites were blocked with goat serum.

Western blot was performed according to previous study [15]. Briefly, tissue samples were homogenated in a RIPA buffer (Qiagen, China) with a cocktail of proteinase inhibitors (Roche Applied Science, Switzerland) and a cocktail of phosphatase inhibitors (Roche Applied Science). The protein concentrations were determined using the Bicinchoninic Acid (BCA) Kit (Pierce). Proteins were separated by SDS-PAGE and transferred to nitrocellulose membranes (Bio-Rad, Hercules, CA). The membranes were incubated with primary NPC2 antibodies (A5413; Abclonal, USA) at 1:1500, or NPC1L1-HRP (ab201773; Abcam, USA): 1:2000) overnight at 4 °C. After washing the membrane, NPC1L1 was visualised using ECL development solution. For detection of NPC2, secondary antibodies incubated at room temperature for 1~2 h and NPC2 was visualised using ECL development solution.

Real-time PCR was performed according to previous study [15]. Briefly, total RNA was extracted from tissues using TRIzol reagent (Invitrogen, Carlsbad, CA), and reverse transcription was performed using PrimeScript™ RT Reagent Kit (Takara, Dalian, China) according to the manufacturer's instructions. The real-time polymerase chain reaction (PCR) was subsequently performed with SYBR Premix Ex Tag (Takara, Dalian, China). The PCR reaction conditions were as follows: 95°C for 15s followed by 40 cycles of 95°C for 5s and 60°C for 30s. The expression levels were normalized against those of the internal reference gene β-actin, the relative expression levels were determined by the following equation: 2-ΔCt (ΔCt=Ct target - Ct β-actin). The related primers were listed as following:

X-tile plots were used for assessment of NPC1L1 and NPC2 expression which was represented as IOD and optimization of cut-points based on outcome [16]. Statistical significance was assessed using the cut-off score derived from 265 cases by a standard log-rank method, with P values obtained from a lookup table. 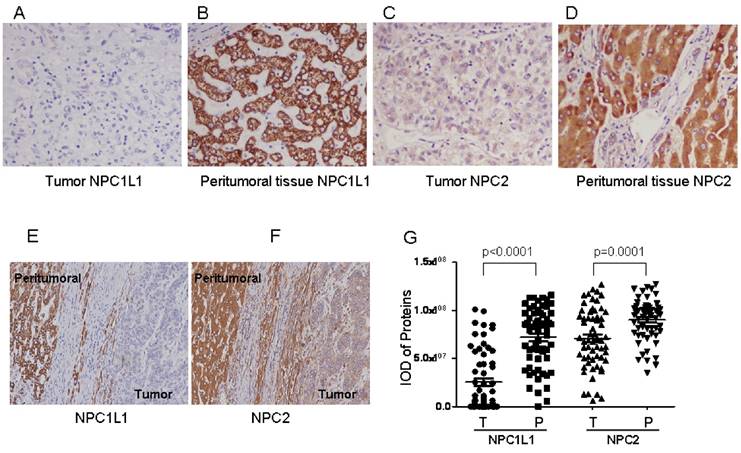 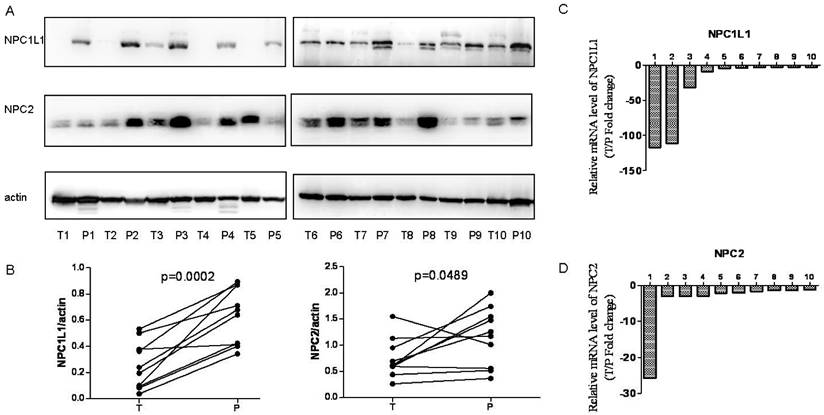 Cut-off point based on outcome and Kaplan-Meier analysis

To obtain the best cut-off point of NPC1L1 and NPC2 expression level for survival analysis in 265 HCC cases of prognosis cohort, the X-tile program was used. Using a standard log-rank method, best cut-off points were obtained with minimum p values from a lookup tables for OS and TTR. 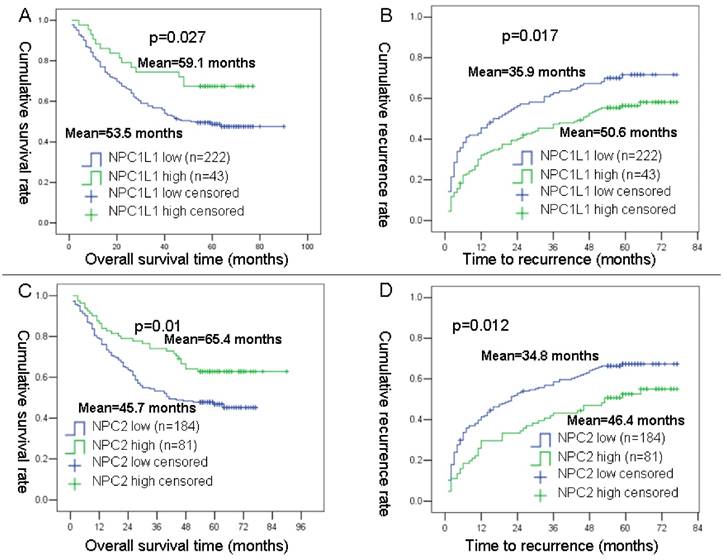 A multinational, long-term HCC survival analysis indicates the significant improvement in outcomes over the past three decades observed in both the East and the West for HCC patients after surgical resection [17]. In detail, postoperative mortality and overall survival rates after major hepatectomy were improved over time with 5-year survival rates of 30 %, 40 %, and 51 % for the years 1981-1989, 1990-1999, and the most recent era of 2000-2008, respectively [17]. However, from the above dada, we learn that almost half of the HCC patients still with unsatisfactory prognosis.

Association of NPC1L1 and NPC2 expression with clinicopathological features in 265 cases of HCC patient.

Recently, it was reported that NPC2 may regulates liver cancer progression via modulating ERK1/2 pathway and low NPC2 protein expression levels may predict poor OS of postoperative HCC patients in small size of patients number (n=50) [19]. In addition, NPC1L1 inhibition has been shown to prevent metabolic disorders such as fatty liver disease, obesity, diabetes, and atherosclerosis [20]. However, there was no report concerning about that NPC1L1 in HCC. In 2006, Jiang et al., summarized that decreased serum levels of cholesterol and apoAI may indicate a poor prognosis [21]. Recently, a Taiwanese based cohort study reported that, serum cholesterol level is a potential risk factor for BMI associated surgical outcome after hepatectomy [22]. Taken together, our results may be a new Insight into serum cholesterol level and NPC1L1 in HCC.

In conclusion, our study is first to demonstrate the expression pattern of NPC1L1 in HCC tumor tissue and peritumoral tissues, and was the first to demonstrate the prognostic value of NPC1L1, and NPC1L1/NPC2 combination is an independent prognostic factor for OS and TTR in postoperative HCC patients. Thus, undertaking the expression level of NPC1L1 and NPC2 in HCC patient tissues may provide a clinicians risk information about OS and TTR of postoperative HCC patient and maybe helpful to study mechanism for relationship between cholesterol and HCC.

Univariate and multivariate analyses of factors associated with OS and TTR in 265 cases of HCC patient.