Colorectal cancer (CRC) is one of the leading causes of cancer-related deaths in many countries. An estimated 1.4 million CRC cases were diagnosed worldwide in 2012(1), and the colorectal cancer rate has also markedly increased during the past 2 decades in China. Most of the newly diagnosed CRC cases were sporadic, but 20% of these individuals were predisposed to CRC because of genetic flaws inherited from their parents(2-4). These cases were recognized as family-aggregated CRC or hereditary CRC. Unfortunately, the predisposing gene mutation has been identified in only a small portion of hereditary CRC(5). Hereditary nonpolyposis colorectal cancer (HNPCC) and family adenomatous polyposis (FAP) are classical hereditary cancer syndromes, but these diseases account for less than 5% of all CRC cases (6, 7). Most of the hereditary CRCs are from atypical cancer families. The deficient genes accounting for the susceptibility of an atypical CRC family are unknown. Moreover, atypical hereditary CRC often observed in a small family with no more than two CRC cases(8). Therefore, it is almost impossible to trace their mutant genes by linkage analysis(9, 10). Recent advances in proteomics study present new techniques for the global measurement of protein markers(11-15). These techniques have been used in combination with bioinformatics approaches to identify potential biomarkers with high sensitivity and specificity for the diagnosis of colorectal cancer (16).

Assuming that individualistic susceptibility to CRC is reflected in the serum proteins of peripheral blood samples, a comparative analysis of the protein profiles in the blood samples of patients with family CRC and those without family CRC might yield consistent differences associated with the features of family history of CRC. To explore this idea, we tentatively explored the serum protein profiles in colorectal adenoma patients with and without a family history of CRC. The objective of the present was to use magnetic bead and matrix-assisted laser desorption/ionization-time-of-flight mass spectrometry (MALDI-TOF-MS) combined with Support Vector Machine (SVM) tools to identify the serum protein markers in colorectal adenoma patients that represent hereditary indicators of colorectal cancer families.

This study was approved by the Institutional Review Board of Medical Research, The Second Affiliated Hospital, Zhejiang University School of Medicine and all experiments were carried out in accordance with the approved guidelines. A total of 170 serum samples from 145 unrelated patients or healthy controls (HC) were collected between 2011 and 2017, and analyzed at 2017 in the present study. The serum samples were evenly distributed into three groups: colorectal adenoma patients with a family history of colorectal cancer potentially from atypical hereditary colorectal families (CRA-H), sporadic colorectal adenoma patients without a family history of colorectal cancer (CRA-S) and healthy controls (HC). The detailed characteristics of the patients in each group are shown in Table 1. The 50 sera were collected from 25 CRC patients before surgery and after surgery, and 30 sera were collected from patients after colorectal adenomas endoscopic resection for controls (Table 2).

A complete colonoscopy was performed for all subjects. Two experienced pathologists in the Second Affiliated Hospital, Zhejiang University School of Medicine pathologically confirmed all colorectal adenomas. The serum samples were collected prior to colonoscopy in the morning before breakfast. The blood samples were exposed to room temperature for no more than 2 hours and were centrifuged at 3000 rpm for 10 min for the separation of serum samples. The serum samples were immediately stored at -80°C until further use. All authors had access to information that could identify individual participants during or after data collection.

Characteristics of the CRA patients

*All adenomas with villous/tuberovillous structure or high-grade dysplasia were ≥1 cm in diameter.

This study was approved by the Institutional Review Board of Medical Research, The Second Affiliated Hospital, Zhejiang University School of Medicine. Written informed consent was obtained from every patient who donated samples for this study prior to initiating the experiments.

Magnetic bead-based weak cation exchange chromatography (MB-WCX) (Bruker Daltonic, Bremen, Germany) was used to separate the peptides in the serum samples. The experiment was conducted using a standard protocol according to the manufacturer's instructions: 5 µl of serum was mixed with 10 µl of binding buffer and 10 µl of MB-WCX beads. The tube was placed into the magnetic separator and the supernatant was subsequently removed. After adding 100 µl of washing buffer to the tube, and the tube was shaken back and forth ten times in the magnetic separator to wash the beads. Subsequently, the supernatant was removed, and the washing step was repeated twice. Next, 5 µl of elution buffer was added to dissolve the beads. The tubes were placed in the magnetic separator, and the clear supernatant was transferred to a fresh tube. Subsequently, 5 µl of stabilizing buffer was added to the tubes. One microliter of the eluted sample was spotted onto a steel target, air-dried, and subsequently 1 μL of the matrix (0.3 mg/ml HCCA, 50% ACN, 2% TFA) was spotted onto the MALDI-TOF steel target, followed by air-drying. The samples were detected using ultrafleXtreme MALDI-TOF/TOF (Bruker Daltonics Corp.) after calibrating the instrument according to the ClinProt standard.

We constructed a non-linear SVM classifier to distinguish the different groups. The leave-one-out cross-validation approach was applied to estimate the accuracy of the classifier. This approach leaves one sample out as the test set and retains the remaining samples as the training set. This process continues until each sample has been reserved one time as a test sample.

The capability of each peak in distinguishing multi-groups was estimated based on the p value of the Wilcoxon Rank-Sum Test. The top peaks with the lowest p values were selected for further analysis. All combinations of these peaks were estimated using leave-one-out cross-validation SVM. The peak combinations with the highest accuracy were selected as potential biomarkers, and the SVM model with the highest Youden's index was selected as the final model for detecting familial colorectal adenomas.

Identification of the biomarkers

The sequences of differentially expressed peptides were identified using ultrafleXtreme MALDI-TOF/TOF. After calibration according to a peptide standard (Bruker Daltonic, Germany), we used the reflection mode to detect the isotopic peaks, and subsequently used the lift model to detect the MS/MS fragment. BioTools and mascot software were used to search the database. The peptide mass tolerance was set at 0.1%, the fragment ion mass tolerance was set at 0.5 Da, and the mass type of parent peptide and peptide fragment were set at monoisotopic.

To verify the expression of KNG1, the serum samples (10 μl) and the protein lysate from tissues (10 μg) were separated by 15%, sodium dodecyl polyacryamide gel electrophoresis and subsequently transferred to polyvinylidene fluoride membranes. After blocking for 2 h at room temperature with blocking buffer (20 mM Tris-HCl, pH 7.5, 100 mM NaCl, and 0.1% TBS/Tween 20 ) containing 5% nonfat milk powder, the membranes were incubated for 2 hours at room temperature with primary antibody KNG1 (1:10,000 Abcam ab124737, Rabbit monoclonal antibody) and β-actin(1:1000, HuaAn Biotechnology M1210-2, for tissues) in blocking buffer. The membranes were washed with TBS/Tween 20, incubated for 1 h at room temperature in secondary antibody (1:10,000, Huabio, HA1001) in blocking buffer, and, finally, washed with TBS/Tween 20. The blots were developed using Immun-Star TMAP Substrate Pack (BioRad, USA) and scanned on an Epson Scan (Agilent Technologies, USA) scanner within the linear range of detection.

Analyzed the expressions of peak 1944 Da in each group

Peak 1944 showed the low expression of CRA-H compared to HC in the CRA-H distinguishing model identified via MALDI-TOF/TOF (Fig 3 A, B). The peptide sequence was identified as H.NLGHGHKHERDQGHGHQR, and the protein KNG1 had the highest score of 70 according to a Mascot search (Fig 4 A, B, C and D).

Western blot experiments were performed to validate the MALDI results. KNG1 was detected in the 6 serum samples (2 colorectal cancer samples, 2 Colorectal adenoma samples, 2 HCs) and 9 tissue samples (3 CRC, 3 colorectal adenoma and 3 adjacent normal paired fresh frozen tissues were surgically collected from 3 CRC patients) using Western blotting. For serum samples, KNG1 was downregulated in Adenoma, and expressed at markedly low levels in CRC in the first group. In another group, KNG1 was expressed at low levels in both Adenoma and CRC but was highly expressed in HC (Fig 4E). For tissue samples, KNG1 was downregulated in CRC than CRA and normal colonic mucosa (Fig 4F). The different expression of KNG1 in sera of CRC, CRA and HC was consistent with which in tissues of CRC, CRA and normal colonic mucosa. 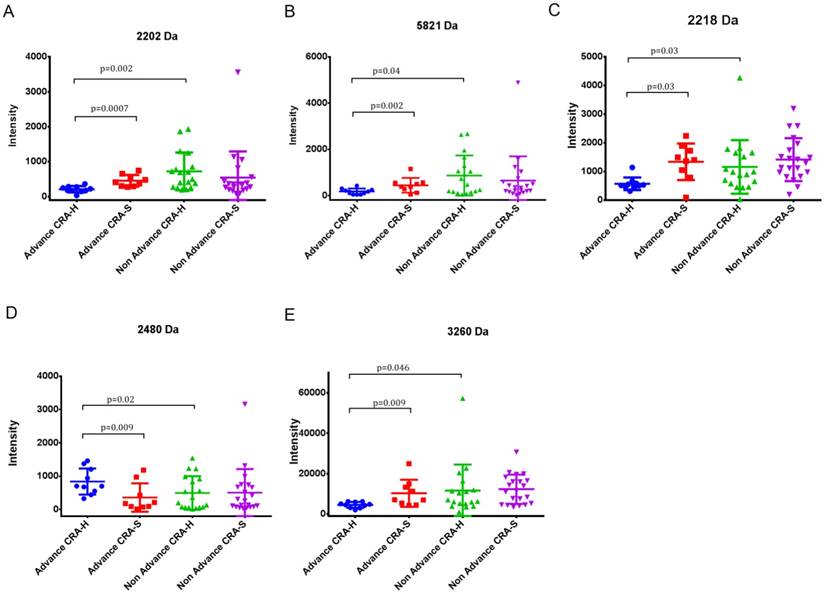 Previous studies have reported that the emergence of colorectal adenoma in a patient may reflect quantitative changes in certain serum proteins. Brown et al observed a progressive increase in serum MIC-1 levels between colorectal adenoma patients and normal individuals(21). Sasaki et al reported significantly higher serum IL-6 levels in colorectal adenoma patients than in controls(22). However, few studies have explored the protein markers that might represent hereditary factors for colorectal adenoma. Numerous studies have focused on germline mutations in the genome of white blood cells for CRC patients. The germline mutations detected in CRC patients are located in the coding region of a gene. The nucleotide changes in this gene cause changes in the amino acid sequence of the protein encoded by the gene. Thus, these proteins are ultimately expressed as abnormal proteins, which might be detectable using high throughout-put techniques. Quaresima et al processed serum samples from FAP patients using a mass spectrometry driven-proteomic strategy (23). These authors successfully identified serum biomarkers specific for two distinct clinical forms of FAP, carpeting FAP and diffuse FAP. These results supported the idea that the serum protein markers for colorectal adenoma are detectable.

Statistics p values for peaks 1944 Da between each group of CRC, CRC after surgery, CRA, CRA after resection and HC. 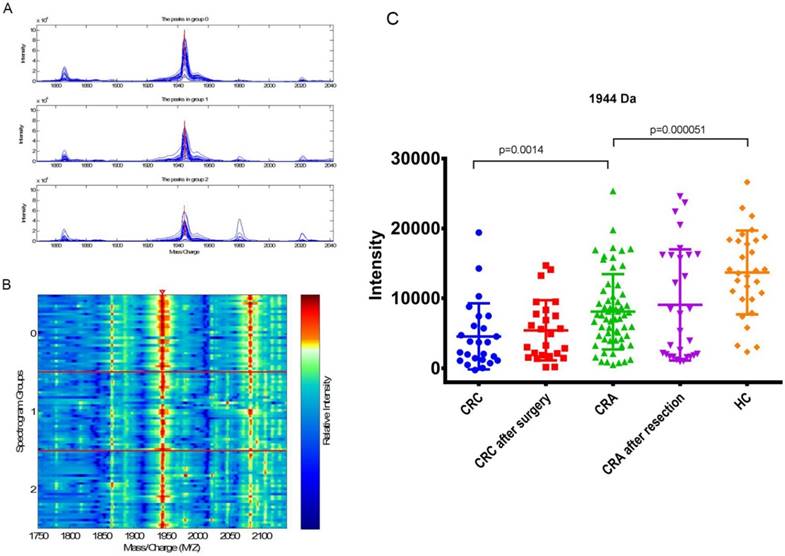 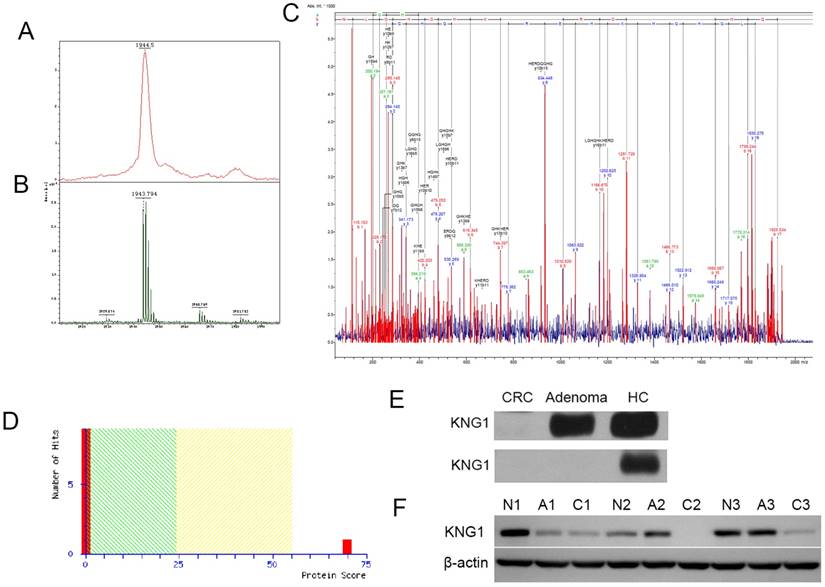 With respect to the comparative analysis of the protein profiles in the present study, colorectal adenoma patients with a family history can be distinguished with an accuracy of 85.0% from those without a family history. It is obvious that Advanced CRA-H is a link in the chain from benign adenoma to malignant altered adenomas and advanced CRC(24). Advanced CRA-H patients are a high-risk group of adenoma patients requiring surveillance. In our study, five peaks (2202, 5821, 3260, 2480, and 2218) were found to have differential expression in Advanced CRA-H. 2480 is expressed in ACRA-H and 2202, 5821, 3260, and 2218 are expressed at low levels in Advanced CRA-H. These five peaks may be specific to Advanced CRA-H.

In the present study, CRA-H and HC can also be distinguished using the SVM model combined with 8 peaks. The peak 1944 showed low regulation in CRA-H than CRA-S. The expression of peak 1944 in CRA was significantly higher than that in the CRC patients, and significantly lower than that in the HCs. The values of peak 1944 were gradually reduced in the occurrence and development of CRC from HC, CRA after resection, CRA, CRC after surgery, to CRC.

Peak 1944 Da was identified using MALDI-TOF-TOF as the protein KNG1. Western blot analysis confirmed that KNG1 was expressed at low levels in CRC and CRA serum.

Kininogen 1 (KNG1) is secreted in human serum. Kininogens are inhibitors of thiol proteases and play important roles in blood coagulation(25). Some groups have reported the detection of KNG1 using mass spectrometry(26-28). However, there are few reports of KNG1 protein expression in tumors sera. Herein, we identified the KNG1 peptide as a potential biomarker for colorectal adenoma patients with a family history, which may also relate to the occurrence and development of CRC.