Exploration of the optimal treatment regimes for Esthesioneuroblastoma: a single center experience in China

CONCLUSIONS: ENB is a rarely malignant tumor with high probability of locoregional recurrence and poor survival. Surgical resection followed by radiotherapy has been shown to achieve optimal local control and overall survival.

Esthesioneuroblastoma (ENB), also known as olfactory neuroblastoma, is a rare tumor comprising 5.0%~13.2% of malignant neoplasm of the nasal cavity with a prevalence of 0.4/million1-3. It has been generally recognized that ENB originates from primitive basal cells of the olfactory epithelium, without available known environmental exposures associated with this neoplasm4-6.

Patients with ENB may be treated with various modalities including surgery, radiotherapy (RT), and chemotherapy or their combinations7-11. Therapeutic strategy may vary significantly among different institutions. Specifically, RT has been used as a preoperative, postoperative, or definitive treatment modality12-14. Modern surgical techniques have been shown to dramatically improve disease-free survival15, 16. Because of low incidence and paucity of reported clinical data, there is still no definitive consensus regarding the optimal treatment forth unusual neoplasm.

The purpose of current study is to explore clinical characteristics of patients with ENB, and to evaluate treatment efficacies of different modalities and prognostic factors. Importantly, an optimal treatment approach for this rare cancer should be addressed by this study.

The medical records of consecutive 54 patients with pathological diagnosis of ENB from July 1986 to February 2011were retrospectively reviewed, the median follow-up for this cohort was 84 months (range, 27~198 months). The protocol of this retrospective study was performed in accordance with the Declaration of Helsinki and was approved by the ethics committee of our hospital. All patients, with30 male and 24 female, were first enrolled in data filtration and analysis (the grading systems at presentation was not evident from the records); whereas one patient with an inadequate treatment record and other nine patients with no treatment were excluded from the final analysis. In sum, Clinical data, including demographics, primary diagnosis, tumor staging, treatment modalities and long-term follow-up outcomes, were collected from 44 patients (Table 1).

All patients were staged with head-neck computed tomography (CT) initially and magnetic resonance imaging (MRI) additionally in recent years. The diagnosis suspected on CT and/or MRI was pathologically proven with biopsy. Both Kadish/Morita staging system and American Joint Committee on Cancer (AJCC) stage (2002) were recorded. Of note, nine patients presented with cervical lymph node (LN) metastases ipsilaterally, with other three patients bilaterally involved. Four patients, who had local skin involvement was classified as stage D according to the Kadish/Morita stage system (Fig. 1). MRI and/or CT scans were routinely applied to assess tumor response to chemotherapeutic agents.

Characteristics and Treatment modalities for patients with esthesioneuroblastoma

To our best knowledge, there is still no definitive consensus regarding the optimal treatment of this unusual neoplasm. Hence, the management of ENB in our unit is also controversial and variable. Patients with confirmed ENB diagnosis were treated with surgical resection, RT and chemotherapy or their combinations. As for surgical procedures, open, endoscopic-assisted craniofacial resection and total endoscopic-definitive resection were performed for ENB patients indicated with surgery. The technique of RT included 2D, 3D and intensity modulated radiation, The techniques of thermoplastic mask, low melting-point lead block, multi-leaf collimator (MLC) and source axis distance (SAD) were applied to radiotherapy. 6-8 MV supervoltage X rays generated by a linear accelerator were used for external irradiation. During the two-dimensional conformal radiotherapy, conventional fraction was given, and the dose for the primary lesion was 64 ~ 72 Gy/32 ~ 36 F.. supervoltage X rays added beta-rays were used to compensate the dose in consideration of skin and subcutaneous tissues in the neck. The prescribed radiation dosage of 3D-CRT were defined as follows: GTVnx (gross tumor volume): 65-70 Gy; GTVnd (positive lymph nodes volume): 60-70 Gy; CTV60 (clinical target volume 60): 60 Gy; CTVnx50 (clinical target volume 50): 50 Gy; CTVnd50 (nodal clinical target volume): 50 Gy. The prescribed radiation dosage of IMRT was defined as follows: 68 Gy in 30 fractions to the planning target volume (PTV) of the primary gross tumor volume (GTV-P), 60 to 64 Gy to the PTV of nodal gross tumor volume (GTV-N), 60 Gy to the PTV of CTV-1, and 54 Gy to the PTV of CTV-2 and CTV-N. The application of chemotherapy contained huge diversity, with several qualified regimens employed (CAV, EP, MAID, etc.). Tumor response to therapy was routinely assessed by CT or MRI and ENT examination.

MRI of a patient with an unresectable esthesioneuroblastoma who presented with proptosis, lateral deviation of the left eye. 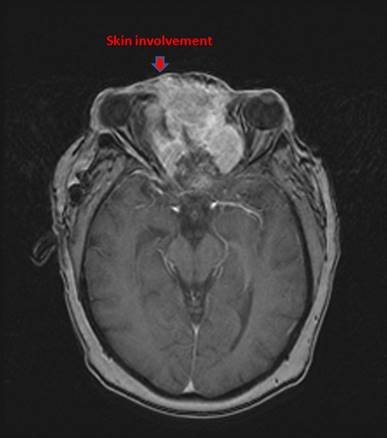 The primary endpoints for this study were relapse-free survival and overall survival. Survival statistics was calculated according to Kaplan-Meier from the date of primary therapy, whereas the disease free survival was calculated from the last day of the given treatment. Survival between groups was compared using the log-rank test. All data analyses were performed by IBM SPSS software (Ver. 23.0; Chicago, IL), with a P value of <0.05 considered statistically significant.

All 54 patients were employed for investigation of clinical characteristics of ENB. The age of onset of ENB revealed a bimodal distribution, with peaks at 10~20 and 50~60 years at primary diagnosis. Among those included, characteristics and treatment modalities were summarized in Table 1.

Six patients were treated with radiotherapy (RT) alone, 10 with surgery followed by RT, 15 with chemoradiotherapy. The technique for RT included 2D conventional RT in 25 patients, 3D conformal RT in five patients and intensity modulated RT (IMRT) in one patient. The median dose to the target volume was 63 Gy (range, 50-76 Gy), median dose per fraction was 2 Gy (range, 1.8~3Gy) with 5-10 MV photons of a linear accelerator. 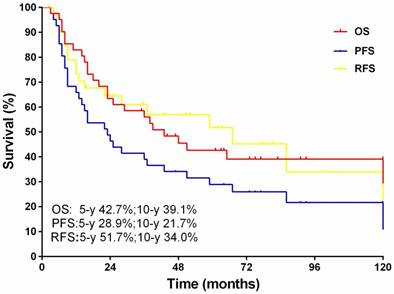 Survival in association with TNM staging

Survival in association with Kadish/Morita staging

Survival in association with skin involvement at initial diagnosis

The overall survival (A, CH) and progression -free survival (B, D) of 44 patients with esthesioneuroblastoma (ENB) when stratified by treatment (A) and stratified by those who received surgery and postoperative radiation versus other treatments. 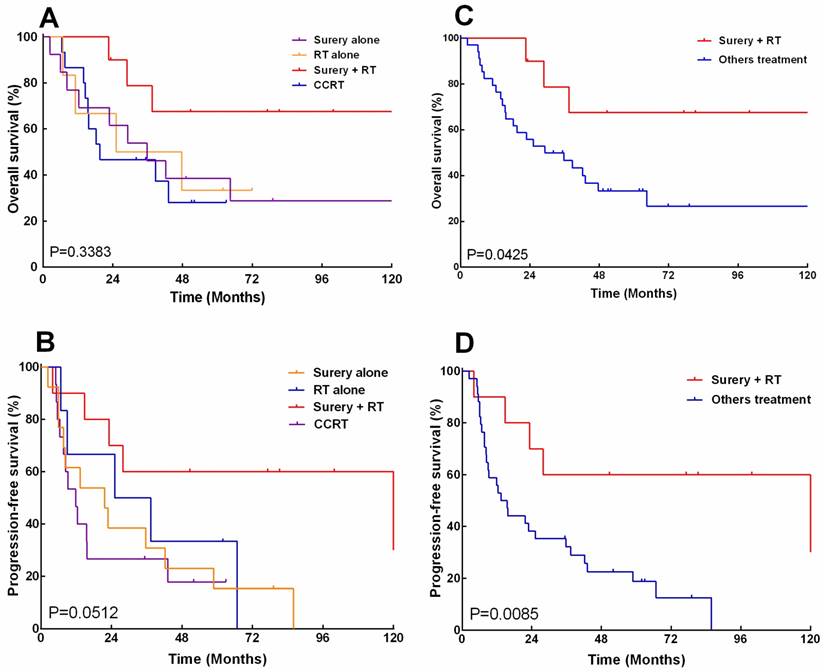 Survival in association with treatment modality

Patterns of failure after treatment

Overall, 21 patients(47.7%) developed relapses or disease progression, which was occurred at 4~121 months (median, 9 months).The local relapse was observed as first recurrence in 12 patients (27.3%), with regional relapse in six patients (13.6%) and distant metastasis in 3 patients (6.8%). The distant metastasis occurred in five patients, which involving the subcutaneous tissue in one patient, the bone in three patients and the breast in one patient. Patients suffering from regional relapses and distant metastasis were mainly treated with chemotherapy and palliative care, however, all of them were poorly controlled with such measures. The 5-year, 10-year recurrent free survival rates were 51.7% and 34.0%, respectively. The median survival time was 20 months for patients with simple local relapses and 14 months for those with regional and/or distant metastasis were 14 months (Table 2).

Patterns of failure for patients with Esthesioneuroblastoma

Among four patients with skin involvement, the median survival time was 22 months. All those patients presented with local relapses (100%), of whom two cases demonstrated a regional relapse. Although salvage chemotherapy or surgery was administered, all of them died from tumor progression.

Our research has shown that ENB manifested with a bimodal distribution of age onset. Surgery combined with radiotherapy showed significantly improved 5-year overall survival and progress-free survival compared with other therapeutic approaches. ENB without skin involvement showed significantly better 5-year overall survival and progress-free survival than that with skin involvement. Locoregional recurrence was the main cause of treatment failure.

The diagnosis and treatment of ENB have improved significantly over the last decades. Our results have demonstrated that 5-year and 10-year overall survivals are superior in patients treated with surgery followed by postoperative radiotherapy to those treated with surgery or radiotherapy alone, which is consistent with recent reports that the combination of surgery and post-operational radiation in the craniofacial regions demonstrates better treatment outcome for ENB patients with 5-year overall survival rates of 60-88%17-19. Gruber et al have reported that the efficacy of RT alone with higher than 73 Gy or combined with chemotherapy was poorer than surgery plus RT, especially for patients having been treated with radical resection20, 21. Due to its special location that ENB readily spreads from its original nasal cavity to peripheral structures at initial diagnosis, the extension of the resection have been expanded as much as possible to ensure complete or near complete tumor excision. Thus, the current therapeutic protocols for ENB consists mainly of surgical resection combined with radiotherapy, radiotherapy and/or chemotherapy could not be used to replace surgery.

The 5-year overall survival rate in our study was 42.7%, which was much lower than that reported in the literature. Contributing factors may include: (1) A fairly large proportion of patients (30%) with Kadish/Morita stage or B disease only received non-surgical treatments; (2) Most patients were treated with surgical procedures of lateral nasal incision, which might limit the range of surgical excision.

According to the modified Kadish/Morita staging system, stage A and B diseases are classified as a relatively limited tumor location, whereas stage C and D diseases as more widespread tumor locations. Patients with stage A or B disease mainly received surgical resection combined with radiotherapy, whereas patients with stage C or D disease mainly received radiotherapy combined with non-surgical treatments. Since the ENB is a very invasive tumor and its diagnosis is often depended upon wide extension of the lesion, single treatment modality may not be as sufficient as combined patterns. Especially for patients with stage C or D disease, the tumor usually has invaded into the maxillary sinus from the nasal cavity or with neck LN metastasis, it seems difficult to treat with primary surgery or radiotherapy alone as the first-line treatment. Therefore, we consider that surgery followed by post-operational radiotherapy would be the optimal therapeutic protocol for ENB.

As for patients with other types of head and neck cancer, radiotherapy plays an important role in treatment or prophylactic therapy of neck LN metastasis. Monroe et al has showed that 11 patients receiving prophylactic neck radiation had no relapses, whereas nine patients without precautionary irradiation experienced a relapse rate of 44%27. In our study, nine patients with LN metastasis who received neck irradiation had no local relapse in the field of radiation, although one patient experienced recurrence at the contra lateral neck without irradiation. Our findings also indicate that radiotherapy would be a valuable treatment of occult metastasis in the neck LN from ENB. Among 33 patients without LN metastasis who did not receive precautionary neck irradiation, five patients experienced neck relapses(15.2%),especially for stage C disease, the relapse rate in the neck was25% (4/16 patients). Besides, 80% of patients with LN relapses were found in the upper neck including IB, II, and III areas. According to these observations we consider that patients in stage D disease with LN metastasis require only irradiation to the neck LN instead of neck dissection.

There are several limitations that should be mentioned. It is a retrospective analysis over a long period; while the low incidence of ENB limits the ability to determine the optimal treatment strategies in this study. Multi-center clinical trial is indispensable for further investigation to improve the treatment efficacy. The association of Hyams grading system with prognostic outcomes should be assessed28; however, this information was not available for the evaluation of the majority of clinicopathologic characteristics in this study.

In summary, patients with ENB could achieve favorable long-term survival when treated with surgical resection followed by postoperative radiotherapy, even though the lesion is locally advanced. Long-term observation is warranted since locoregional recurrence and mortality remains high. Multi-center clinical trial on improving treatment efficacy is indispensable for further investigation.

This research was supported by: