Background: Pancreatic cancer is a devastating disease with a low five-year survival rate. Dendritic cells (DCs), which are the most potent antigen-presenting cells in the human body, play a pivotal role in the immune response. However, few studies have investigated the role of pancreatic cancer-derived exosomes (PEXs) in DC-meditated immune escape. The expression profiles of long noncoding RNAs (lncRNAs) and mRNAs of PEX-treated dendritic cells are unknown.

Methods: We used integrated lncRNA and mRNA microarrays to determine the expression profiles of PEX-treated DCs and normal DCs derived from five healthy donors. Gene Ontology (GO), KEGG, and cancer genomics analyses were performed to identify significant functions, pathways, and the associations of differentially expressed mRNAs. A coexpression network was constructed to identify the correlation between differentially expressed lncRNAs and mRNAs and further validated using real-time quantitative PCR in twenty healthy donors. The AnnoLnc program was used to perform an annotation analysis of lncRNAs.

Conclusions: To our knowledge, this is the first study to detect the differential expression of lncRNAs and mRNAs associated with PEX-treated DCs. LncRNAs such as ENST00000560647 and mRNAs such as lgmn might play a critical role in immune escape of DCs treated with PEX. Further investigation is required to validate the functions and associations of these RNAs.

Pancreatic cancer is a devastating disease that is difficult to diagnose, which helps to explain the 10% five-year survival rate [1]. Moreover, approximately 53,070 Americans were predicted to have been diagnosed with pancreatic cancer, and approximately 41,780 Americans were predicted to have died of pancreatic cancer in 2016. This lethal disease is the fourth most common cause of cancer-related deaths among Americans [2]. Surgical resection, radiation therapy, chemotherapy, and adoptive immunotherapy are continuously improving; however, patients diagnosed with pancreatic cancer remain extremely vulnerable to relapse and death. New strategies to prevent and cure pancreatic cancer are therefore urgently required. For example, exosomes and nanovesicles secreted by living cells serve as intercellular couriers of mRNA, microRNAs (miRNAs), long noncoding RNAs (lncRNAs), and proteins and have thus garnered considerable interest [3]. Tumor-derived exosomes can deliver tumor antigens to dendritic cells [4] that participate in tumor progression [5, 6] and play an important role in the immune system [7-10].

Dendritic cells (DCs) are the most potent antigen-presenting cells in the human body, because they play a pivotal role in the immune response, which is inhibited in the tumor microenvironment [11]. The regulatory factor X-associated protein (RFXAP), is an important transcription factor for MHC II, and is inhibited by miR-212-3p transferred from pancreatic cancer-derived exosomes (PEXs) to inhibit MHC II expression [12]. Further, PEXs inhibit the expression of toll-like receptor 4 (TLR4) and tumor necrosis factor-alpha (TNF-alpha) via miR-203 and induce immune escape of DCs [13].

Long noncoding RNAs (lncRNAs) (>200 nucleotides) interact with DNA, RNA, or protein molecules to regulate gene expression and affect cellular processes [14, 15]. Tumor-derived exosomes are key players in the communication between cancer cells and their microenvironment through their cargoes, which include proteins, lncRNAs, mRNAs, and miRNAs [16]. However, few studies [12, 13] investigated the role of PEXs in DCS that mediate immune escape. The expression profiles of lncRNAs and mRNAs in DCs treated with PEXs are unknown.

The human pancreatic cancer cell line PANC-1 was obtained from Chinese Academy of Sciences (Shanghai, China), tested, and authenticated. The cell line was cultured in Dulbecco's Modified Eagle's Medium (DMEM) with 1% antibiotics (Gibco, USA) and 10% fetal bovine serum (Gibco) until 90% confluent. The medium was then replaced with serum-free DMEM for 48 h. The cell-free supernatant was collected by centrifugation at 300 × g for 10 min and 2000 × g for 10 min to remove residual cells and debris and then for 10,000 × g for 30 min to remove microparticles. The supernatant was then passed through a 0.22-µm filter (Millipore, USA) and then centrifuged at 100,000 × g for 70 min to pellet the small vesicles that corresponded to exosomes. The pellet was washed in a large volume of phosphate-buffered saline (PBS), to eliminate contaminating proteins and centrifuged at the same speed [17] using an Optima TLX Ultracentrifuge (Beckman Coulter, USA). The final pellet was resuspended in 100-µl PBS. The size distribution of exosomes was determined using nanoparticle tracking analysis (NTA) Version 2.3 Build 0034. The exosomes were placed on carbon-coated 400-mesh copper grids, stained with 2% uranyl acetate, air-dried, and imaged using transmission electron microscopy.

Generation of DCs and treatment of DCs with PEXs

Phenotypic analysis of DCs was performed using flow cytometry. On day 7 of culture, cells were harvested and stained with a monoclonal antibodies against HLA-DR (APC-conjugated anti-HLA-DR; BD Biosciences, USA) and CD83 (PE-conjugated anti-CD83; BD Biosciences) in the dark for 30 min at 4ºC. Cells were then washed twice with PBS. Fluorescence-activated cell sorting (FACS) was performed using a FACSCalibur flow cytometer (BD Biosciences, USA) and CellQuest Software (BD Biosciences). On day 8, DCs were treated with PEXs (20 µg/mL) for 24 h (exo-DCs), and PBS was used as negative control for nDCs.

CD4+ and CD8+ T cells were sorted from PBMCs using human anti-CD4-conjugated and human anti-CD8-conjugated microbeads (Miltenyi Biotec, German). To determine the proliferation of T cells, mixed DCs and T cells were continuously cultured for 7 days with 25 U/ml recombinant IL-2 (R&D Systems), which was added on days 3 and 5, [3H]-thymidine was added on day 6, and T cell proliferation was subsequently assessed.

Gene Ontology (GO, www.geneontology.org/) analysis, Kyoto Encyclopedia of Genes and Genomes (KEGG, www.genome.jp/kegg/) analysis, and cancer genomics analysis, which is based on a TCGA pancreatic adenocarcinoma dataset with 186 samples and 185 patients using the cBioPortal for Cancer Genomics program [18, 19] (http://www.cbioportal.org/), were performed to identify the functions and associated enriched pathways of differentially expressed mRNAs. The mRNA expression z-score threshold was defined as ± 2.0.

Construction of an lncRNA-mRNA coexpression network

RT-qPCR was performed to validate the expression of significantly altered levels of lncRNAs and mRNAs. Total RNA was isolated and purified using an miRNeasy Mini Kit (Qiagen, USA) following the manufacturer's instructions. RT-qPCR was performed using an ABI 7500 Real-Time PCR System (Applied Biosystems, USA) with the primer pairs listed (Table S2). The relative expression ratios of lncRNAs and mRNAs are presented as fold-changes normalized to those of GAPDH.

SPSS 19.0 software (IBM Corp., Armonk, NY, USA) was used to perform statistical analysis. The Student t test was used to evaluate the significance of differences in expression among lncRNAs and mRNAs differentially expressed by exo-DCs and DCs. The threshold value used to designate differentially expressed lncRNAs and mRNAs was a fold change > 2.0 or < 0.5, P < 0.05.

The Research Ethics Committee of Sir Run Run Shaw Hospital, School of Medicine, Zhejiang University reviewed and approved the protocol. All participants or their guardians gave written consent for the use of subjects' tissue samples and the medical information used for scientific research purposes.

Characterization of PEXs and DCs

PEXs were detected using western blotting analysis of the expression of the exosome-specific markers ALIX, TSG101, and CD63 (Fig. 1A). The size distribution of the PEXs ranged from 20-200 nm (Fig. 1B). Transmission electron microscopy showed typical vesicular structures, and the size distribution was consistent with that determined using NTA (Fig. 1C). DCs were identified using flow cytometry. The percentages of CD83 and HLA-DR-double positive cells reached 80.2% (Fig. 1D).

Characterization of PEXs and DCs. (A) Western blotting analysis of PEXs detected the presence of the exosomal markers ALIX, TSG101, and CD63. (B) According to nanoparticle tracking analysis, the sizes of the PEXs ranged from 20 nm to 200 nm. (C) Transmission electron microscopy of PEXs. (D) Flow cytometric analysis of DCs. 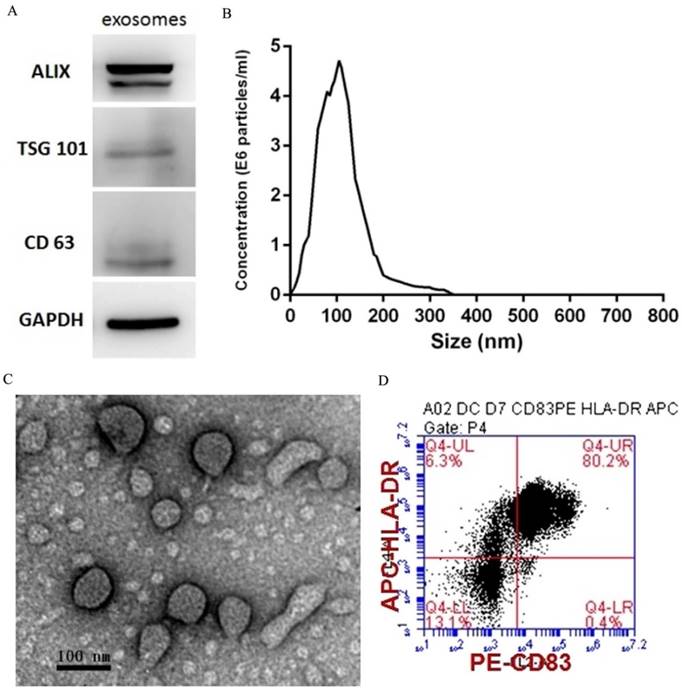 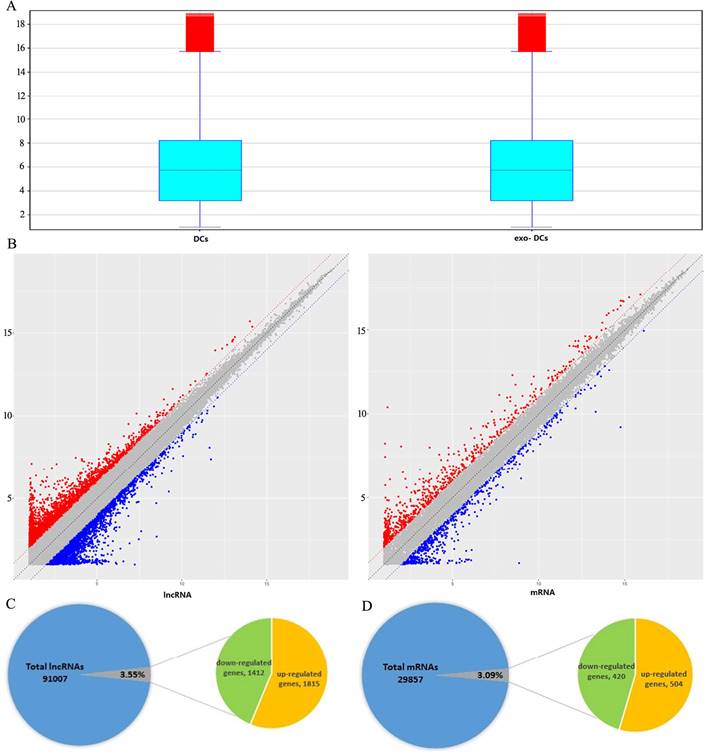 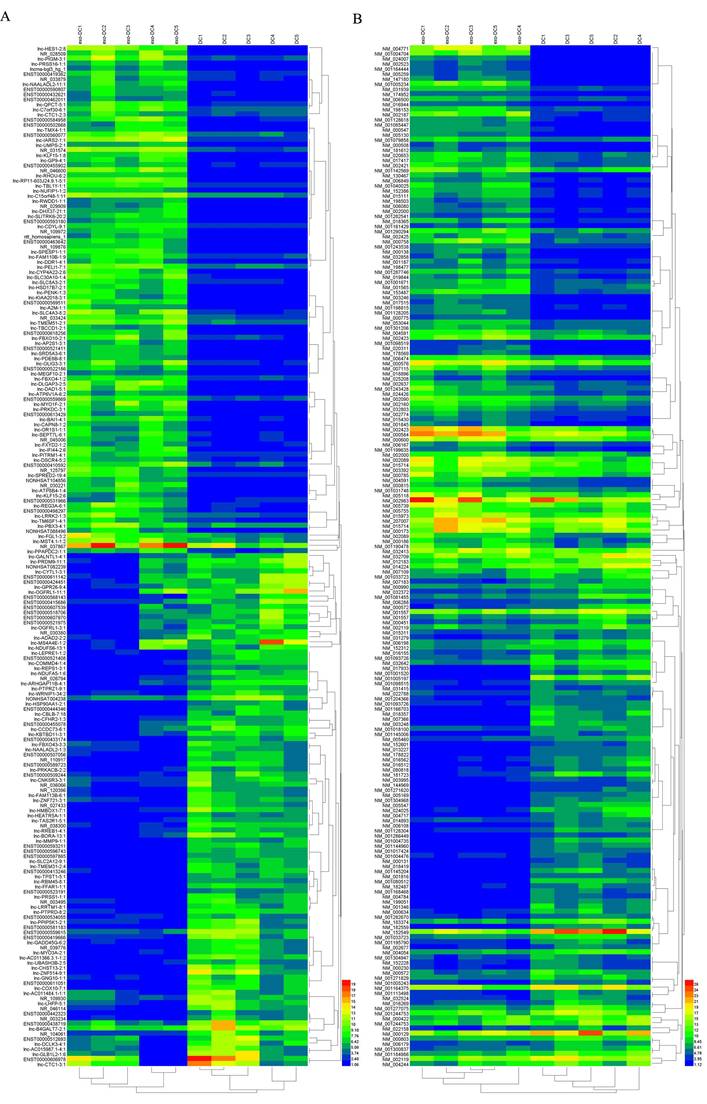 Expression profiles of LncRNAs and mRNAs 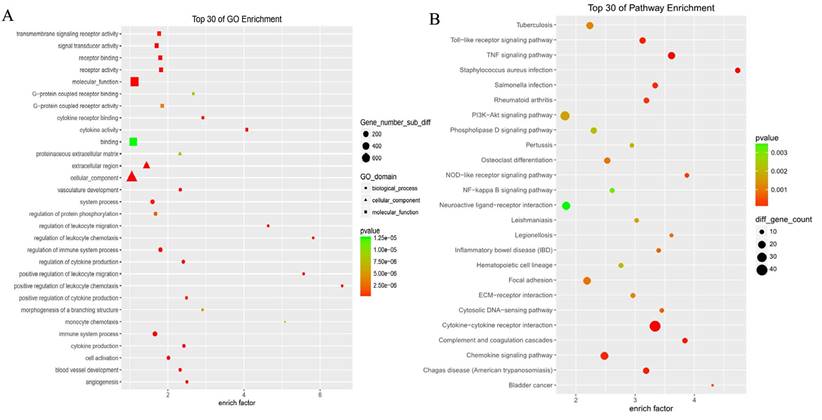 Cancer genomics analysis based on the cBioPortal Cancer Genomics program. The 36 most differentially expressed mRNAs and the 50 most frequently altered neighboring genes (total = 2,158 genes). 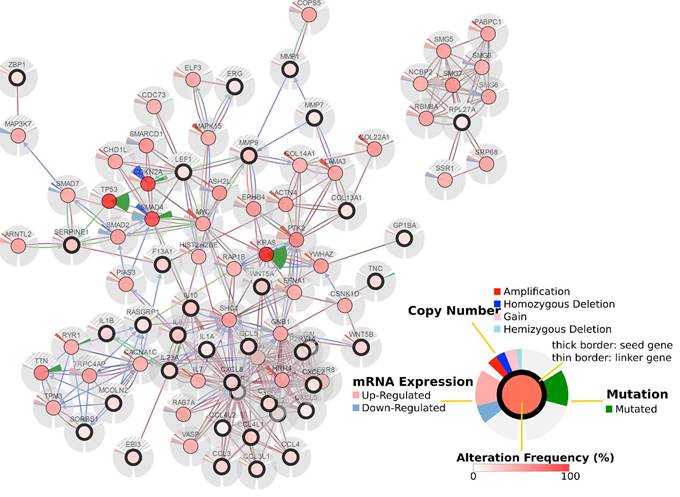 LncRNA-mRNA coexpression network. The blue nodes denote mRNAs and the green triangles denote lncRNAs. The degrees of lncRNAs or mRNAs are indicated by the size of the nodes or triangles. 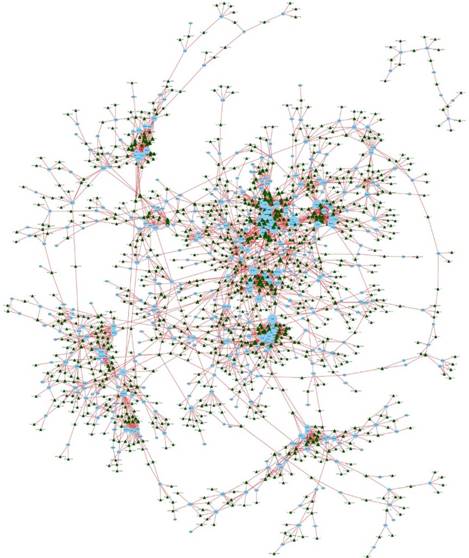 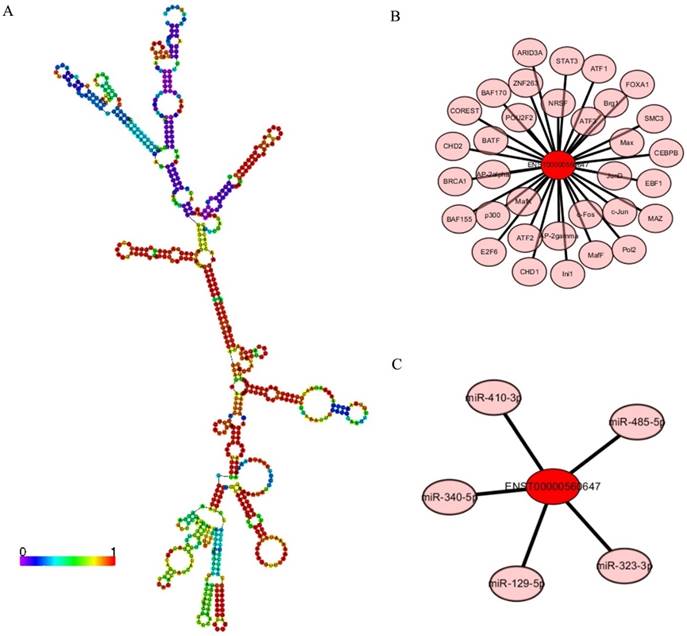 LncRNA ENST00000560647 was up-regulated by approximately 6.33- to 7.16-times in exo-DCs. According to the genes that were coexpressed with this lncRNA, we attempted to determine if they were enriched in functions that might provide hints that would illuminate function. The predicted secondary structure of lncRNA ENST00000560647 (702 bp; chromosome 15, sequence positions 45,742,316 to 45,805,965) is shown in Fig. 9A. Its expression was predicted to be regulated by 60 transcription factors (Fig. 9B) and to interact with 5 miRNAs (Fig. 9C). The table shows the GO annotation of lncRNA ENST00000560647. The GO annotations of biological process and molecular function of the positive coexpression gene sets are shown in Tables 1 and 2.

Tumor-derived exosomes are involved in cancer development, invasion, and metastasis [21-24]. Exosomal lncRNAs are potential biomarkers and therapeutic targets for multiple cancers [23, 25-29]. However, few studies [12, 13] investigated the role of PEXs in DC-meditated immune escape. The expression profiles of lncRNAs and mRNAs of exo-DCs are unknown.

To further explore the relationships to pancreatic cancer among these differentially expressed mRNAs, we performed a cancer genomics analysis, which was based on a TCGA pancreatic adenocarcinoma dataset comprising 186 samples and 185 patients. The results show that the 36 most differentially expressed mRNAs are involved in the pancreatic cancer network and are associated with many critical mutated genes such as TP53, KRAS, SMAD4, and CDKN2A.

To further validate the results of the microarray analysis, the top 10 differentially expressed lncRNAs and mRNAs in 10 healthy donors were analyzed using RT-qPCR. The results indicated that the microarray data correlate well with the RT-qPCR results. Lgmn expression decreased by approximately 3-fold in PEX-treated DCs. Lgmn encodes an enzyme that may be involved in the processing of bacterial peptides and endogenous proteins for MHC class II presentation to the lysosomal/endosomal systems. Further, lgmn plays a critical role in endocytic Toll-like receptor processing and signaling in DCs [30]. This result suggests that PEXs may inhibit the function of DCs by down-regulating the expression of Toll-like receptor and MHC class II proteins. Further research is required to validate this hypothesis.

LncRNA ENST00000560647 was up-regulated by approximately 6.33- to 7.16-times in PEX-treated DCs. However, its function is unknown. Annotation analysis based on the AnnoLnc program, predicted that lncRNA ENST00000560647 (702 bp; chromosome 15, nucleotides 45,742,316 to 45,805,965), is regulated by 60 transcription factors and that it interacts with five miRNAs. These five miRNAs are involved in many cancers, including pancreatic cancer [31-37]. For example, Wang et al. [34] found that miR-323-3p expression in pancreatic cancer tissues and cell lines is significantly decreased. Re-expression of miR-323-3p might provide a new therapeutic target against metastasis in patients with pancreatic cancer. Certain lncRNAs can serve as “sponges” to titrate microRNAs based on the competing endogenous RNA mechanism [38, 39]. Further validation is required to establish the relationship between ENST00000560647 and miR-323-3p in pancreatic cancer.

This study was supported by Zhejiang Provincial Natural Science Foundation of China under Grant No.LY17H160015 and the National Natural Science Foundation of China (No.81572323) and Zhejiang Provincial Medical and Health Science and Technology Program (No. 2018KY491). We thank Liwen Bianji, Edanz Editing China (www.liwenbianji.cn/ac), for editing the English text of a draft of this manuscript.