Methods: Retrospective monocentric analysis of a consecutive cohort of PIPAC patients between January 2015 and April 2016. Detailed hematological and biochemical analysis was performed the day before surgery and once daily until discharge. Comparative statistics were performed using Mann-Whitney U test and Wilcoxon signed ranked test.

Conclusion: PIPAC was followed by a modest and transitory inflammatory response that was commensurate to the disease extent. No hematological, renal or hepatic toxicity was observed even after repetitive administration.

Intraperitoneal (IP) chemotherapy is a treatment alternative for selected patients with peritoneal carcinomatosis (PC) [1, 2]. The rationale for IP treatment is to obtain higher intraperitoneal concentrations with low systemic uptake to reduce systemic toxicity [3, 4]. Intraabdominal complications, hematological but also renal toxicity, and a profound inflammatory response are typical adverse events of both types of conventional treatment, namely hyperthermic IP chemotherapy by lavage (HIPEC) and IP chemotherapy administered by an implantable catheter [5-7].

The aim of this study was to assess hematological, renal and hepatic toxicity in a consecutive cohort of PIPAC patients and to measure inflammatory response after PIPAC.

PIPAC was introduced at the University Hospital of Lausanne (CHUV) in January 2015. All patients entered a prospectively maintained coded online data base. Considered for PIPAC treatment were patients with isolated PC of various origins with persistence or progression after standard treatment including surgery and systemic chemotherapy (≥2 lines for most patients). All indications were confirmed during multidisciplinary tumor board. PIPAC treatment alone was preferred and combined intraperitoneal and systemic treatment was exceptional. The present analysis on toxicity and inflammatory response includes all consecutive patients operated until April 2016. Feasibility, postoperative outcomes and quality of life of this cohort were reported recently [8, 9]. The study was approved by the Institutional Review Board (N°2016/0274) and all patients provided written consent for utilization of their data. This study was registered online (www.researchregistry.com #UIN: 2197). STROBE criteria [10] were adhered to for conduction and reporting of the study. The study was conducted in accordance with the principles of the Declaration of Helsinki.

Methodology and surgical approach of PIPAC have been reported elsewhere [8, 11]. Briefly, three PIPAC treatments were scheduled at 6-week intervals upon decision of multidisciplinary tumor board. Every patient was seen in outpatient consultation 4 weeks after PIPAC treatment for monitoring of complications and evaluation of contraindications to proceed with PIPAC procedures. Thoraco-abdominal computed tomography (CT) was performed 4 weeks prior to first PIPAC and between PIPAC#2 and PIPAC#3 to rule out extraperitoneal disease and a third CT was scheduled 2 months after completion of 3 PIPAC treatments [8]. Intraperitoneal chemotherapy regimens were defined on individual basis adhering closely to the empiric definitions of the German pioneer group suggesting oxaliplatin monotherapy (92 mg/m2 body surface) for colorectal primary and combined cisplatin (7.5 mg/m2 body surface) and doxorubicin (1.5 mg/m2 body surface) for ovarian and gastric origin [8, 11, 12]. IP treatment was administered for 30 minutes at 37°C and with a standard laparoscopic pressure of 12 mmHg. After treatment, pneumoperitoneum with potential remaining cytostatics was evacuated via a closed system including two microparticle filters [2].

Assessment of postoperative toxicity and inflammation

Blood drawings were performed in a fasting state following standardized institutional guidelines, the day before surgery and once daily until discharge.

Several comparisons and statistical correlations were defined a priori: Evaluation of cumulative toxicity after repetitive PIPAC applications and comparison of systemic inflammation between PIPAC#1, PIPAC#2 and PIPAC#3. Comparison of inflammation and toxicity response between patients treated with oxaliplatin vs. cisplatin and doxorubicin. Correlation between tumor load as assessed by the Peritoneal Cancer Index (PCI) and post-inflammatory response [19].

Continuous variables were presented as mean with standard error of the mean (SEM) or median with range or interquartile range (IQR) for skewed data. Categorical variables were reported as frequencies (%) and compared with chi-square test. Wilcoxon signed ranked test, Mann-Whitney test and Kruskal-Wallis test were used for statistical comparisons. Statistical correlations were tested by use of Pearson's rank correlation. All statistical tests were two-sided and a level of 0.05 was used to indicate statistical significance. Statistical analyses were performed and figures were produced with SPSS v20 statistical software (Chicago, IL, USA) and GraphPad Prism 7 (GraphPad Software, Inc., La Jolla, CA, USA).

Patients' characteristics and details of the procedures

The present cohort included 42 consecutive patients who underwent a total of 91 PIPAC procedures, distributed in 2 groups receiving oxaliplatin vs. cisplatin+doxorubicin, respectively. The oxaliplatin group was composed of 20 patients (37 procedures) with colorectal primay (15), small bowel cancer and pseudomyxoma (1 each), and 3 patients with gastric cancer. For the latter group, medical oncologists decided on individual basis to deviate from the empirical protocol (twice due to contraindications). The remaining 22 patients (21 ovarian, 1 mesothelioma; 54 procedures) received cisplatin+doxorubicin according to recommendations. Baseline characteristics are displayed in Table 1.

Creatinine level was not significantly altered after PIPAC procedures at post-operative day (POD) 2: ∆max -3±1μmol/L (p=0.095). Based on liver enzymes AST and ALT on POD 2, no hepatotoxicity was caused by PIPAC treatment: ∆max -13±4U/L (p=0.153) and ∆max 4±3U/L (p=0.351) respectively. Differences in hepato-renal impact comparing the two regimens were not significant as detailed in Figure 1. Likewise, no difference was noted when comparing consecutive PIPAC procedures for all three parameters (Figure 2).

Seven (17%) and 6 (14%) patients surpassed institutional thresholds for AST and ALT, respectively. There was no lasting effect. No patient presented acute kidney injury according to RIFLE criteria or AKIN classification.

The profiles of inflammatory markers displayed by chemotherapy regimen are illustrated in Figure 3. For both regimens CRP and Lc count were characterized by an increase on POD 2 and POD 1 respectively (Figures 3A and 3C). Conversely, albumin level decreased by POD 2 (Figures 3D). Both regimens influenced markers' kinetics similarly except for PCT (where oxaliplatin induced a higher increase than cisplatin+doxorubicin) (Figure 3C). 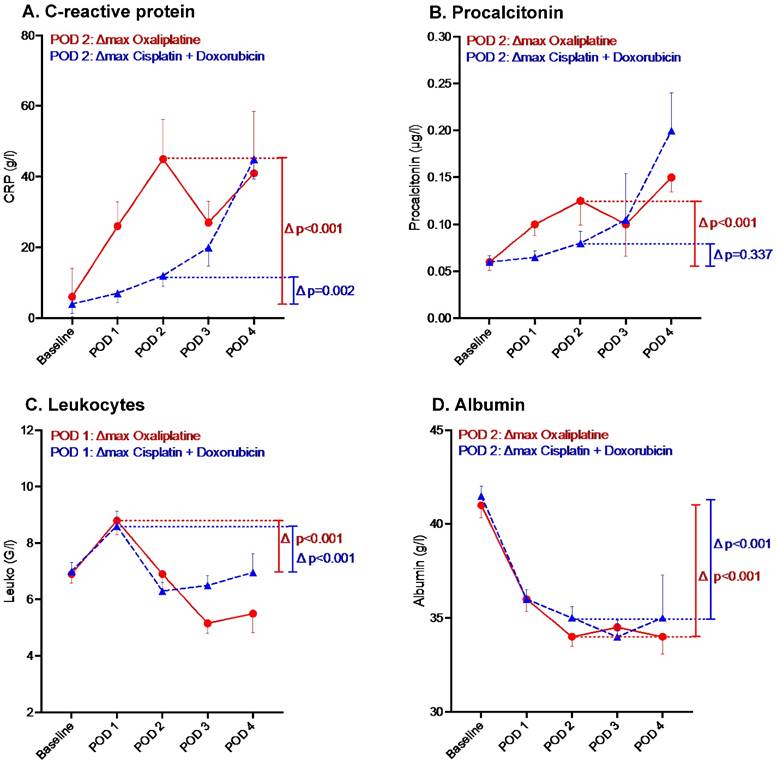 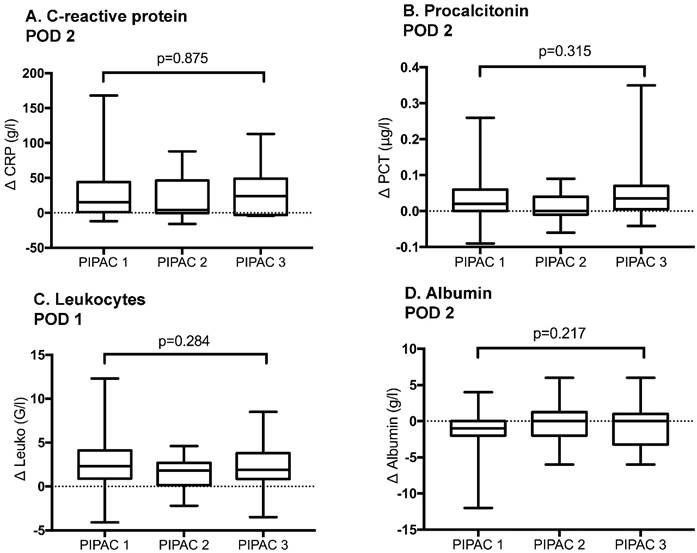 The extent of inflammatory response after consecutive PIPAC procedures was similar with no significant difference for any of the candidate markers (Figure 4). 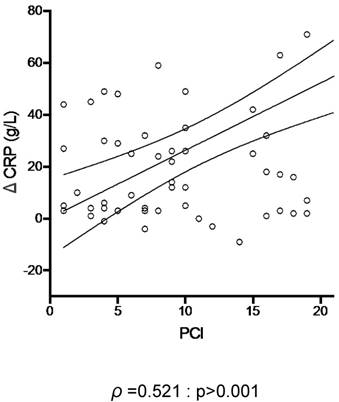 In this cohort, PIPAC was followed by a modest and transitory inflammatory response that was commensurate to the disease extent. No hematological, renal or hepatic toxicity was observed even after repetitive administration.

The findings of the present study need to be discussed in the setting of four available treatment options for advanced peritoneal carcinomatosis: systemic chemotherapy, hyperthermic intraperitoneal chemotherapy (HIPEC) after cytoreductive surgery (CRS), intraperitoneal catheter chemotherapy and PIPAC (Table 2). Of note, it is not the intention to formally compare those treatment approaches due to their very different nature but to provide a comprehensive overview on what is known on toxicity and inflammatory response under the respective treatment.

Systemic chemotherapy represents a first line therapy in patients with peritoneal carcinomatosis, especially with extraperitoneal spread of tumor [20]. New drugs such as antibodies or irinotecan allowed for better survival in recent years, but pharmacokinetic limitations such as peritoneum-plasma barrier impede proper penetration of cytostatics in peritoneal tumor nodes [21, 22]. Parenteral drug concentrations need thus to be high to achieve a therapeutic effect. Up to tenfold higher concentrations were described for systemic chemotherapy as compared to intraperitoneal use, and side effects for most therapies are common [4]. Chemotherapy induced peripheral neuropathy represents a well-known side effect of platin-based chemotherapy regimens [23]. Up to 90 % of patients are affected after systemic oxaliplatin treatment, and treatment options remain scarce [24, 25]. Cisplatin is eliminated by the kidney, and dose-dependent renal toxicity of cisplatin and its metabolites has been described [26]. Standard systemic doses of 75-100 mg/m2 lead to tubular necrosis in up to 30% of patients, and renal failure might be the ultimate consequence [26]. Taken together and in the light of pharmacokinetic limitations of systemic therapy for the treatment of peritoneal carcinomatosis, alternative locoregional treatments were considered.

Cytoreductive surgery combined with HIPEC represents the only potentially curative treatment option in few selected patients who are fit enough to tolerate this complex treatment option with important morbi-mortality [5, 27]. Intraperitoneal administration permits higher drug concentration with better tumor penetration as compared to systemic chemotherapy [28, 29]. Even if no formal consensus exists, common drugs for HIPEC are cisplatin, mitomycin C and oxaliplatin in different combinations and doses, depending on the primary tumor [27]. In high volume centers, mortality rates of up to 5.8%, major complication rates between 12-52% and hematological toxicity of up to 28% of patients were described using these regimens [27]. Irinotecan was added in more recent years; neutropenia and thrombopenia at the 7th postoperative day occurred in 11% of patients in a cohort treated with a combination of Irinotecan and Oxaliplatin [30]. In a recent study using the same regimen, hematologic toxicity was even higher with 41% neutropenic (<500/μl) patients and 26% with grade 3 thrombopenia (<50000/μl) [31]. PIPAC as a minimally invasive treatment option might thus represent an alternative for frail patients who are not eligible for this curative approach given the multitude of surgery- and drug-related side effects.

PIPAC combines the advantages of intraperitoneal administration, allowing for higher tumor concentrations [28] and administration under pressure, which permits higher intra-tumoral concentrations despite lower drug doses [3]. In a pilot study of the pioneer group from Herne, Germany, peripheral drug concentrations of doxorubicin were very low with 4.0-6.2 ng/ml after PIPAC treatment within standard conditions [1]. As a consequence, only modest and transitory inflammatory response was observed in former studies and in the present cohort [34-36]. This response might be a consequence of drug-induced chemical peritonitis after intraperitoneal vaporisation, which provides an explanation for abdominal pain as main postoperative complaint after PIPAC [34]. Two centers reported on toxicological aspects of PIPAC treatment [35, 36]. Similar to the present findings, Blanco described liver and renal parameters within the normal range with no cumulative toxicity [35]. Similarly, an Italian group described no clinically relevant liver cytolysis without metabolic nor synthetic hepatic and renal dysfunction [36]. Both groups concluded that PIPAC caused less hepatic and renal toxicity than other chemotherapy delivery routes due to lower therapeutic doses and favorable kinetics [35, 36]. The present findings confirm the previously reported results. As a consequence of low toxicity, encouraging results regarding quality of life and tolerance of the procedure have been described by our group and by others [8, 9, 37].

Several limitations of the present study need to be discussed beyond retrospective study design and small patient cohort. Given the very short median hospital stay, only few patients were available for blood drawings after POD 3 and inflammatory parameters beyond POD 3 should therefore not be considered representative for the entire PIPAC cohort. Systemic toxicity was low in the present study, which might be due to low administered drug concentrations. The proposed regimens did not derive from a dose escalation protocol and hence, drug choices and doses rely on empirical protocols. Three dose escalation studies however have been initiated in the meantime (NCT02475772, NCT03172416 and Eudra-CT 2016-003666-49). Since PIPAC is a very new technique, no long-term results are available to date. Despite favorable short-term results regarding clinical and histological response rates [34, 38, 39], sustained long-term impact of PIPAC under presently applied conditions needs yet to be proven.

In conclusion, there was no relevant systemic toxicity after PIPAC with the current treatment standard even when repeatedly applied. Inflammatory response was modest and transitory. It is important to repeat this type of studies for new treatment standards, especially when using higher drug concentrations.

27. Chua TC, Yan TD, Saxena A, Morris DL. Should the treatment of peritoneal carcinomatosis by cytoreductive surgery and hyperthermic intraperitoneal chemotherapy still be regarded as a highly morbid procedure? a systematic review of morbidity and mortality. Annals of surgery. 2009;249(6):900-907

45. Hompes D, D'Hoore A, Wolthuis A, Fieuws S, Mirck B, Bruin S, Verwaal V. The use of Oxaliplatin or Mitomycin C in HIPEC treatment for peritoneal carcinomatosis from colorectal cancer: a comparative study. Journal of surgical oncology. 2014;109(6):527-532