Hepatocellular carcinoma (HCC) was the third leading cause of cancer mortality worldwide, responsible for more than half a million deaths each year [1]. The incidence and mortality in China were about 3 55,595 and 322,417 cases in 2011[2]. HCC had strong association with chronic hepatitis B virus (HBV) and chronic hepatitis C virus (HCV) infections, and additionally alcohol abuse [3]. Currently, HBV carriers and chronic B hepatitis patients were estimated around 93 million and 30 million in China [4].

Mitochondrion (MT) was an extremely important cellular organelle. It was best known for adenosine triphosphate (ATP) production, synthesizing ~95% of energy required for metabolism. MT genome encoded 13 polypeptides of the respiratory chain complexes, as well as 22 transfer RNAs and two ribosomal RNAs participating in mitochondrial protein synthesis [5]. Mitochondria also played a key role in the regulation of cellular function and cell apotosis [6-8]. Previous study found that mitochondria had the correlation with tumorigenesis by increasing production of reactive oxygen species (ROS), decreasing oxidative phosphorylation and increasing in glycolysis [9-11].

Oxidative stress was increased in individuals infected with HBV [12, 13], and the accompanied reactive oxygen was an important inducer of DNA mutations [14]. Because of lacking histones and DNA repair system, mutations of MT genome could accumulate to a greater extent [15, 16]. In the past few years, mutations of MT genome had been widely detected in several types of cancer [17-20]. For instance, mutations of DLOOP region had been linked to less differentiated hepatocellular carcinomas (HCC) and with stage progression and prognosis in non-small cell lung cancers [21, 22]. Many types of human malignancy, including colorectal cancer, liver cancer, breast cancer, lung cancer, prostate cancer, skin cancer and bladder cancer, were related to tumor-specific mutations of MT genome [10, 23].

Traditionally, the copy number and mutations of MT genome were detected by PCR-based methods. Significant bias could be caused by primer designing and the PCR process. With the rapid development of massively parallel sequencing (MPS) technology, whole genome sequencing (WGS) will bring new insight to the detection of copy number variations and mutations of MT genome.

We studied 88 Chinese individuals who were diagnosed with HCC at Queen Mary Hospital. Sample collection and whole genome sequencing had been described in the previous publication [24]. Written informed consents were obtained from each patient. The study protocol was approved by the Institutional Review Board of Queen Mary Hospital [26]. The data was anonymized before the whole genome sequence data was accessed. Sequence data had been deposited in the European Nucleotide Archive (ENA, http://www.ebi.ac.uk/ena/) under accession number ERP001196 and in GigaDB (http://dx.doi.org/10.5524/100034).

Low-quality and adaptor-contamination reads were removed to obtain clean reads for subsequent analysis; meanwhile, MT genome (NC_012920) was used as reference. Then clean reads were aligned to this reference genome by using the BWA software [27]. A mapping quality score was assigned to each alignment by BWA. After removing the PCR duplicates and low mapping quality (Q<10) reads, we used the Mito-seek software to call heteroplasmic mutations [25]. In each sample, we calculated the copy number of MT genome according to the ratio of the average depth of MT genome vs whole human genome. The equation we used to calculate the copy number of MT genome was as followed: 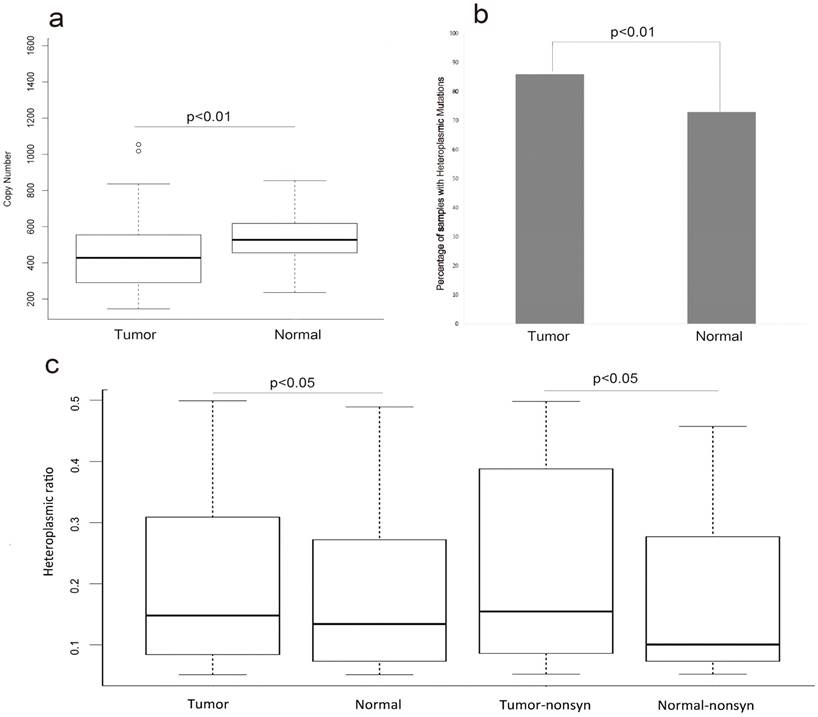 The Inclination of Heteroplasmic Mutations

The specific heteroplasmic mutations of tumor 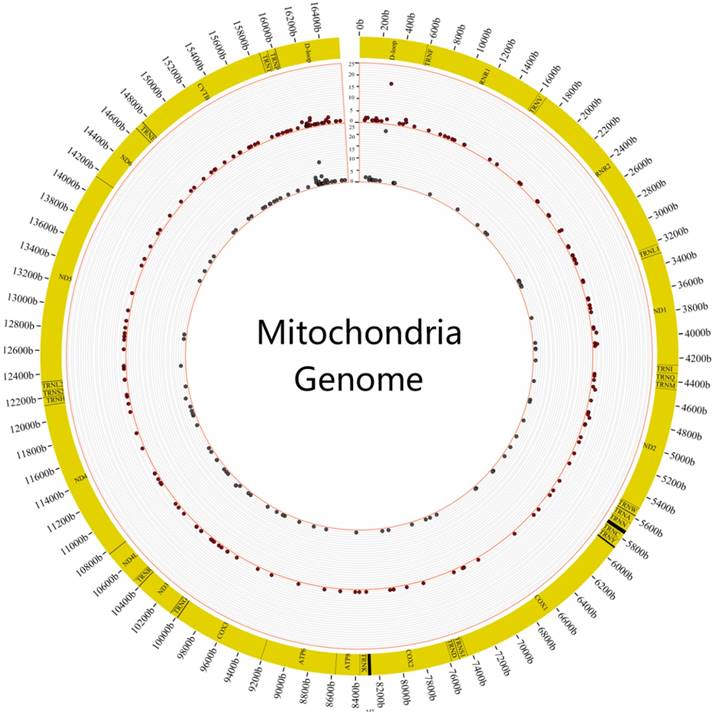 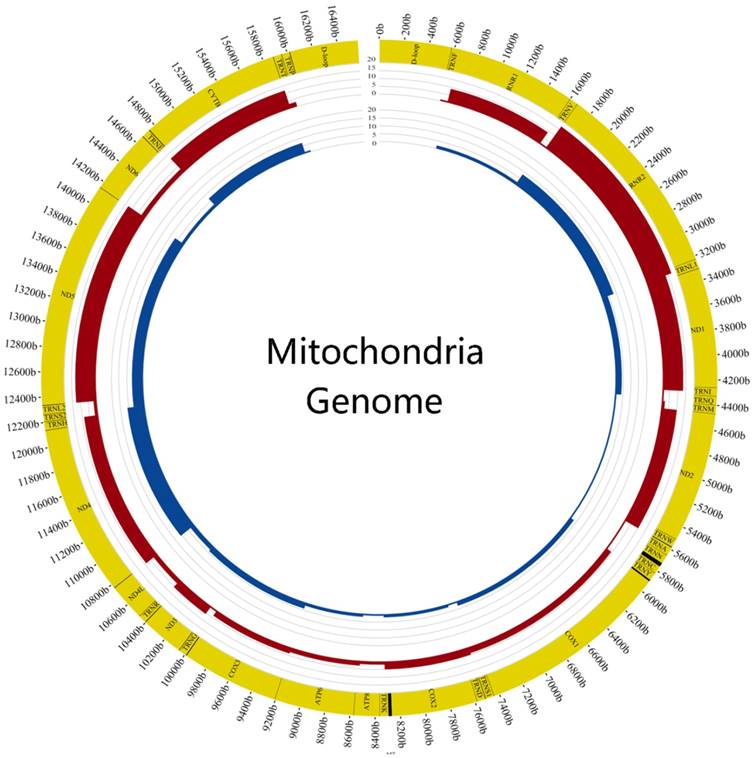 The number of synonymous and nonsynonymous mutations

The table showed that the number of synonymous and nonsynonymous mutations in tumor and normal samples.

The study is sponsored by Doctoral Setup Foundation of Jining Medical University (No. 600491001), the Natural Science Foundation of Shandong Province (No. ZR2016CB49, No. ZR2016HM55). We are grateful to Asian Cancer Research Group, Inc. (ACRG).

5. Wei YH. Mitochondrial DNA mutations and oxidative damage in aging and diseases: an emerging paradigm of gerontology and medicine. Proceedings of the National Science Council, Republic of China Part B, Life sciences. 1998;22:55-67