Purpose: To date, there is not enough evidence concerning the optimal treatment strategy for early rectal carcinoids, we conducted a meta-analysis in order to determine the feasible local treatment for these selected patients.

Methods: We searched the studies from the PubMed, Cochrane database, Medline, Ovid, SpringerLink, PMC and Embase between January 2007 and April 2017. Studies of local surgical excision compared with endoscopic resection for rectal carcinoids less than 20mm without adverse features were included. Data were analyzed by using Stata SE 12.0.

Results: Seven studies were included in this meta-analysis, with a total of 1056 patients. The data showed that local surgical excision was associated with higher complete resection rate than that of endoscopic resection (OR 5.837, 95%CI 2.048 to 16.632, P=0.001) but consuming longer procedural time (SMD 1.757, 95% CI 1.263 to 2.251, P=0.000). Additionally, incidences of recurrence and en bloc resection rate were comparable between two kinds of resections. The difference of post-operative complications remained unclear.

Conclusions: For rectal carcinoids sized 20mm or smaller without adverse features, endoscopic resection might be an efficient treatment, which achieved a comparable oncological safety as local surgical excision.

Carcinoid tumors, derived from neuroendocrine cells compartments, mostly arise along the intestine, among which rectum was found to be the third most frequent predilection site[1, 2]. Currently, rectal carcinoids with adverse features for metastasis including diameters larger than 20mm, invading muscularis propria, lymphovascular invasion or positive regional lymph node, are suggested to be removed by radical surgery, while tumors in diameters 10mm or less are supposed to be treated by local resection[3-5]. As for the carcinoids sized between 10mm to 20mm, the management remains controversial. Previous studies reported that rectal carcinoids sized 10 to 20 mm without adverse features can benefit from locally resection irrespective of whether endoscopic or surgical treatment[6-8].

Nevertheless, it remains unclear whether endoscopic resection or local surgical excision can provide better postoperative outcomes for the selected patients. Besides, there is no guideline or consensus concerning the optimal local treatment strategy for carcinoids removal. To answer this question, the current meta-analysis aimed to compared the efficiency and safety between local surgical excision and endoscopic resection and determine the optimal strategy for rectal carcinoids sized 20mm or smaller without adverse features.

Studies meeting following criteria were included: (1) Including rectal carcinoids sized 20mm or smaller without adverse features (2) Including local surgical excision and endoscopic resection (3) At least one outcome available directly or through calculation (4) Published in English. We excluded reviews, pooled-analysis, case reports, position papers as well as editorials and those outcomes were not reported or unable to be calculated from results.

We used the Newcastle-Ottawa Scale(NOS) to assess the quality of the non-randomized studies included.

We carried out statistical analysis with STATA SE 12.0 software integration (StataCorp, Houston, Texas, USA). The odds ratio (OR), rate difference (RD), standardized mean difference (SMD) and 95% confident interval (CI) were calculated for studies included. Statistical heterogeneity between studies was assessed by the chi-squared test with a P value, of which 0.10 was set to be significant. The quantity of heterogeneity measured using the I2 statistic. I2 was put between 0% and 100%, equal to zero when no heterogeneity. A fix effects model was used for pooling of data when statistical heterogeneity was not present, otherwise a randomized effects model was used. We measured the publication bias with Begg's test and Egger's test.

Figure 1 shows the procedure of selection for study inclusion. 290 records were identified by the primary computerized literature search. After screening the titles and abstracts, we excluded 277 records not concerning. The full texts of the retrieved 13 manuscripts were read thoroughly, among which 6 studies were excluded for unclear report of their characteristics of patients or their outcomes. Finally, we included 7 studies in the meta-analysis, with a total of 1056 patients[13-19]. Among these patients, 126 were treated with local surgical excision and 930 with endoscopic resection. It should be noted that in the study of Kasuga et al, 22 patients took radical surgery after endoscopic treatment due to positive resection margin[14]. The characteristics of the 7 studies included in this paper were shown in Table. 1 and the results of NOS were shown in Table. 2. The outcomes were shown in Table. 3. Tumors were found to be sized 20mm or less, without muscularis propria or lymphovascular invasion and regional lymph node metastasis.

Only 2 studies reported the rate of complication including bleeding and perforation, which is rare and unsuitable for meta-analysis. The study done by Jeon et al indicates that 16 patients suffered from bleeding, 5 after EMR and 11 after ESD. Apart from that, there was no bleeding or perforations reported.

Flow chart of the study selection process and exclusion criteria. 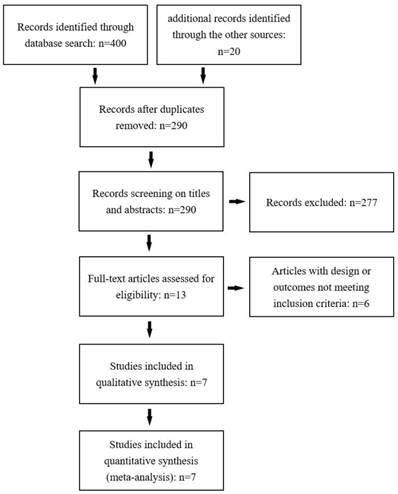 An en bloc resection was defined as no residual tumors under endoscope after resection. Three studies reported this outcome. The overall RD was 0.054 (95%CI -0.005 to 0.114, P=0.073) (Fig.3). This meta-analysis shows that local surgical excision achieves a similar rate of en bloc resection as endoscopic resection.

A complete resection was defined as a negative margin on histopathological examination after resection. The forest plot in Figure 3 summarizes the results of 5 studies, with an overall pooled OR 5.837 (95%CI 2.048 to 16.632, P=0.001) (Fig.4). The analysis indicates that local surgical excision is more capable of complete resection than endoscopic resection. There is no present significant publication bias according to Begg's test(P=0.806) as well as the Egger's test(P=0.609). 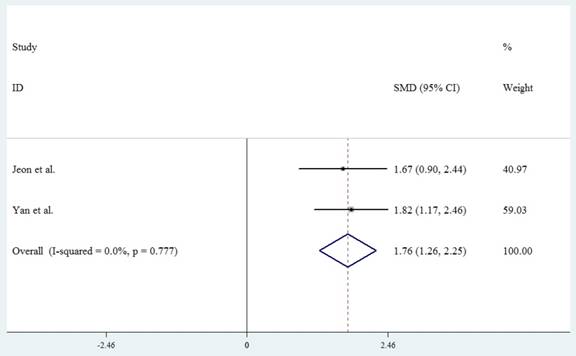 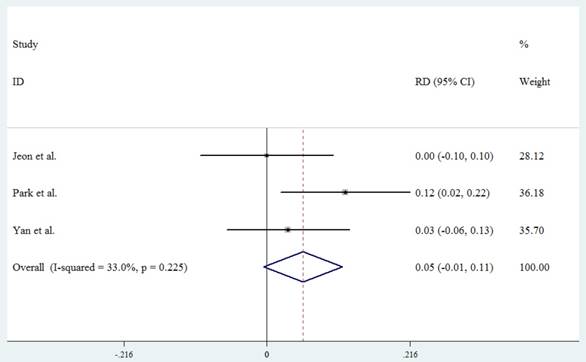 It was advocated that after excision for rectal carcinoids, positive margins could lead to recurrence and are supposed to be managed by additional surgery [21, 24], while according to our meta-analysis, carcinoids receiving proper follow-up, shared a similar recurrence rate despite different complete resection rate after two kinds of resections. Kaneko [25] and Kim [26] also reported 11 and 54 patients with rectal carcinoids sized smaller than 10mm who did not demonstrated recurrence with positive resection margins. Besides, a meta-analysis carried out by Zhong proved that in spite of a significant difference of complete resection rates, recurrence rates of rectal carcinoids smaller than 16mm in diameters treated with ESD and EMR are low and similar[27]. Kim indicated that such phenomenon may due to the low malignant potential of small rectal carcinoids included[26]. More significantly, Chen[28], analyzing 6 cases of metastasis among 239 patients receiving ESD, found that lymphovascular invasion, one of the adverse features of metastasis, also serves as a risk factor of systematic recurrence. Low malignancy and lack of adverse features could make an explanation for our findings. Our results show that both local surgical excision and endoscopic resection are safe and appropriate for rectal carcinoids sized smaller than 20mm without adverse feature, and positive resection margins may not be a risk factor for recurrence. 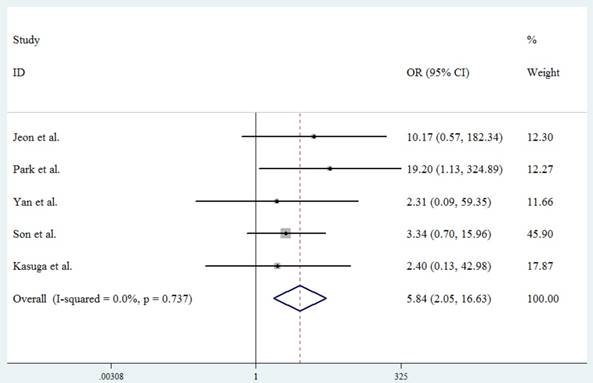 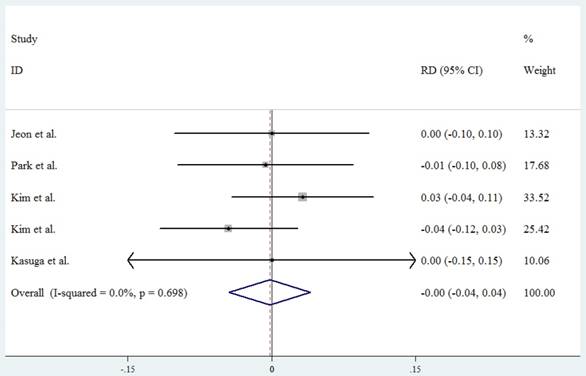 Although we failed to make comparison of complications through meta-analysis, the study by Jeon[13] still reported 16 bleeding after endoscopic resection, significantly different compared to 0 among patients receiving TEM. However, reported by Park[20] and Yang[10], the rate of bleeding is low after endoscopic resection, and no perforations were found. What's more, Lee observed only 2 bleedings and 1 perforation among 46 patients treated with ESD and 1 bleeding among 28 patients receiving EMR[29]. The reason might be the difference of performance and experience of surgeons. As for local surgical excision, there were neither bleedings nor perforations found among studies included. Kumar [12] found that bleedings after TEM are rare, only 4 among 325 patients, and proved the association between large-size and intraoperative bleeding as well. According to that, carcinoid tumors smaller than 20mm may be less likely to develop bleedings or perforations during or after local surgery. However, surgical excision could trigger other complications rarely found among endoscopic resection cases, like urinary retention and anus ache. In our study, Yan[19] reported 5 urinary retentions and 16 anus aches caused by spinal anesthesia and operative anal. Kumar, meanwhile, found 19 urinary retentions after TEM, which may require inpatient hospitalization [12]. Complications brought by endoscopic resection could be easily managed through interventions, while those by local surgical excision were severe. More comparative studies of complications are required to further assess the relative complications of endoscopic resections and local surgical excision.

Our analysis has certain limitations. Firstly, studies included are all retrospective. Without RCT, the bias could affect the results. Secondly, we lack reports of procedural time, which may lead to selection bias. Thirdly, we cannot analysis the outcomes of tumors in diameters 10 to 20 mm and less than 10mm by subgroups due to unclear reports. Fourthly, the grading of carcinoids in our study was uncertain.

In conclusion, for rectal carcinoids sized 20mm or smaller without adverse features, endoscopic resection might be served as an efficient treatment, which achieved a comparable oncological safety as local surgical excision.