In traditional Chinese medicine, Fuzi is widely used as an antitumor agent or an adjuvant medication combined with radiotherapy and chemotherapy, but its mechanism remains unclear. In this study, we investigated anti-tumor and immunoregulation efficacy of Fuzi combined with radiotherapy in mice with Lewis lung cancer (LLC). We found that Fuzi combined with radiotherapy significantly inhibited the growth of LLC, promoted the apoptosis of cancer cells, and prolonged the survival of mice with LLC. Mechanistically, we found that Fuzi decreased the proportion of Treg cells, reduced serum levels of cytokines such as interleukin (IL)-10 and transforming growth factor (TGF)-β, and downregulated the expression of programmed death ligand-1 in mice with LLC subjected to radiotherapy. This study suggests that Fuzi has immunomodulation function to act as radiosensitizer and improve radiotherapy against lung cancer.

The lateral roots of Aconitum carmichaelii Debx. (Ranunculaceae), also named “Fuzi”, are used in raw or prepared forms in Chinese medicine. Currently, 122 chemical constituents have been isolated and identified from Fuzi and most of them are alkaloids [7]. Fuzi has long been used to treat heart failure, shock, pulmonary hypertension, coronary heart disease, and rheumatic heart disease for its analgesic and anti-inflammatory effects [8, 9]. In addition, recent studies indicate that Fuzi inhibits tumor growth in vivo by improving host immune responses [10, 11]. However, anti-tumor efficacy of Fuzi in combination with radiotherapy remains unclear. In this study, we aimed to evaluate anti-tumor and immunomodulatory efficacy of Fuzi in radiotherapy of lung cancer using mouse with Lewis lung cancer as the experimental model.

Fuzi was provided by the Jinshan Hospital of Fudan University (Shanghai, China) and identified by associate chief physician, Huaping Ren, Department of Chinese medicine, Jinshan Hospital of Fudan University. Fuzi extract was prepared as follows: Fuzi was crushed into coarse powder, soaked in a 10-fold volume of water for 30 min and then boiled for 2 h. The supernatant was concentrated after filtration using 0.22-μM filters. Freeze-dried powder was then prepared and stored at 4°C.

Female C57BL/6J mice were provided by the Shanghai Experimental Animal Center and maintained in a specific pathogen-free-grade animal room. The mice were inoculated with 2×106 fresh LLC cells in the right leg when they reached 6-8 weeks of age and weighed 18-22 g. Ten days after the inoculation of tumor cells, the mice were randomly divided into four groups (n=10). Group I received saline solution (N.S., 5 ml/kg) as a control (C group). Group II received radiation (5 Gy) every day for 5 days from day 4 to day 8 (irradiation group; IR). Group III received Fuzi at a dose of 3.60 mg/10 g daily from day 1 to day 11 (Fuzi group). Group IV was pretreated with Fuzi and irradiated as described above (IR + Fuzi). All mice were fasted for 30 min after intragastric administration. Mice in IR group were tied to small boards, and their tumors were centered in a 3-cm2 field. Radiation was delivered five times to the tumor-bearing leg using a linear X-ray accelerator unit with a single dose of 5 Gy from day 4 to day 8, for a total dose of 15 Gy. Fuzi extracts or saline solution were administered to C57 mice by intraperitoneal injection. Ten mice in each group were observed for tumor growth and survival. Starting on the 16th day, tumor-bearing mice in each group were euthanized and sacrificed by intraperitoneal injection of a lethal dose of pentobarbital (200 mg/kg body weight). The tumor volume was measured when tumors were visible, and survival curves for the ten mice from each group were surveyed for 80 days after inoculation. Tumor volume was determined by the following formula: tumor volume (cm3) = 1/2 × length (cm) × width2 (cm). Tumor inhibitory rate was calculated as follows: Tumor inhibitory rate = 1 - (Mean tumor weight of treated group/mean tumor weight of control group) × 100%. All protocols were carried out in accordance with the ethics committee of Jinshan Hospital (Shanghai, China).

Spleens were ground in RPMI 1640 medium (HyClone, MA, USA) and then passed twice through 200 mesh nylon. Erythrocytes were removed using Red Blood Cell Lysis Buffer. The cell suspension was then filtered through mesh, and the number of lymphocytes was counted under a microscope. Tregs were phenotyped as CD4+Foxp3+ as follows: the cells were stained with CD4-percp and Foxp3-PE (eBioscience, San Diego, CA, USA) and subjected to cytometry on a FACSCalibur flow cytometer (Becton Dickinson). CD4+ cells and CD4+Foxp3+ cells were quantified.

C57BL/6J mice were challenged with LLC cells and then treated with Fuzi and irradiated. We observed significantly slower tumor growth in IR + Fuzi group compared to other three groups on the 9th, 11th and 13th day (p < 0.05) (Fig. 1A). As shown in Fig. 1B, the median survival time of mice in the control, IR, Fuzi, and IR + Fuzi group was 30, 51.5, 49, and 63 days, respectively. The difference between IR + Fuzi and control groups was significant (p = 0.0001). The tumor volume was obviously the smallest in IR + Fuzi group among all four groups (Fig. 1C). The tumor weight was the lowest and tumor inhibition rate was the highest IR + Fuzi group among all four groups (Fig. 1D). Collectively, these results suggest that Fuzi enhances anti-tumor efficacy of irradiation in LLC mouse model.

Enhanced anti-tumor effects of irradiation combined with Fuzi. A. Tumor growth curve. *p < 0.05 vs. control group, # p < 0.05 vs. IR group. B. Kaplan-Meier plot of the estimated survival for the mice in four groups. Survival in IR + Fuzi group was significantly better than the other three groups (p < 0.01). C. Size distribution of the tumors in four groups. D. Tumor weight and tumor inhibitory rate in four groups. Tumor weight was the lowest and tumor inhibitory rate was the highest in IR + Fuzi group. *p < 0.05. Data represented mean ± SD (n = 5). 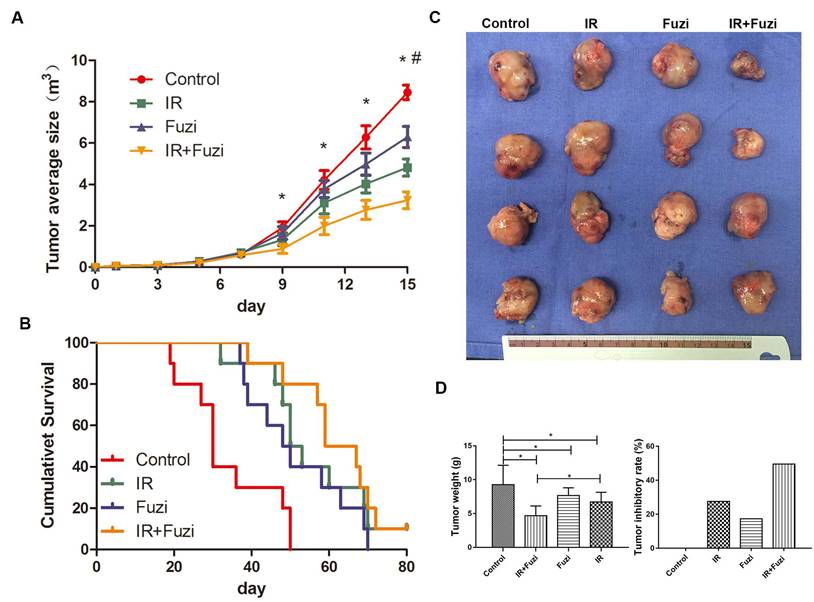 The apoptosis of xenograft cells was assessed by TUNEL staining. Representative TUNEL staining images in four groups were shown in Fig. 2A-D. Quantitative analysis showed that the apoptosis rate was the highest in IR + Fuzi group, significant higher than in other groups (p < 0.05, Fig. 2E). These results suggest that Fuzi could enhance irradiation induced tumor cell apoptosis in LLC mouse model.

Radiation-induced changes in the number and ratio of CD4+Foxp3+ Treg cells were investigated in lymphocytes isolated from the spleens of irradiated mice. Representative flow cytometry images of Treg cells in four groups were shown in Fig. 4A. Quantitative analysis showed that CD4+Foxp3+Treg cell ratio increased in IR group compared to control group, but Fuzi treatment could reduce CD4+Foxp3+Treg cell ratio (Fig. 4B). These results indicate that Fuzi could antagonize radiation induced Treg accumulation in LLC mouse model. 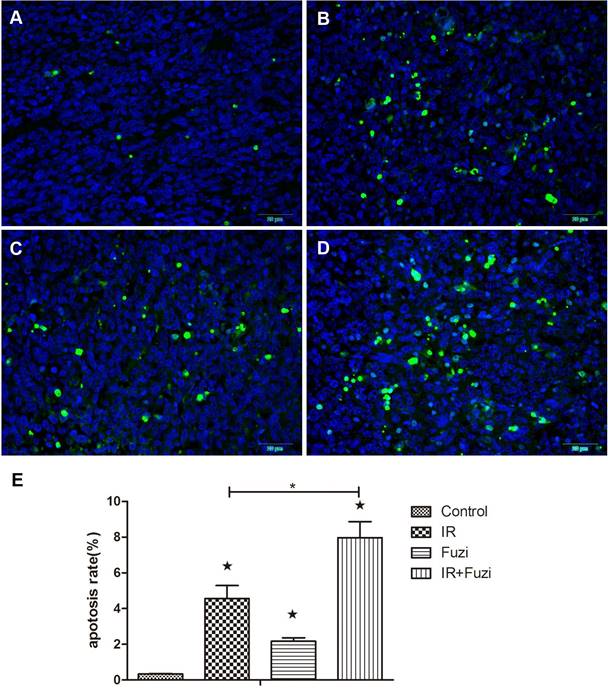 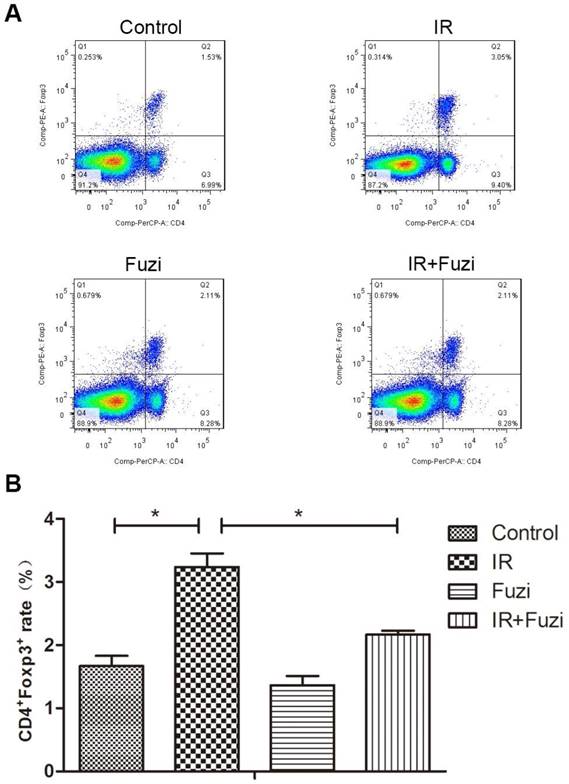 The expression of PD-L1 mRNA in xenograft tissues were detected by RT-PCR. As shown in Fig. 5A, while PD-L1 mRNA expression increased after IR, it decreased significantly after additional Fuzi treatment (p < 0.05). Consistently, Western blot analysis showed that PD-L1 protein level increased after IR, but decreased significantly after additional Fuzi treatment (p < 0.05, Fig. 5B, C). These results indicate that Fuzi could inhibit radiation induced upregulation of PD-L1 in LLC mouse model. 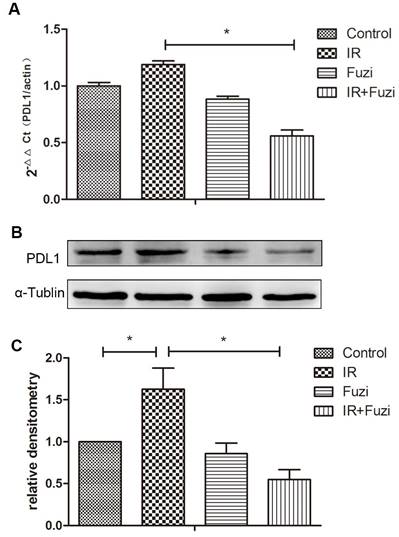 To understand the mechanism underlying the radiosensitization effect of Fuzi, we first investigated the impact of Fuzi on immune function in mice after irradiation because accumulating data indicate that ionizing radiation influence antitumor immune response. IL-2 and IL-6 are known to be critical inducers of Th17 cell differentiation, which can enhance the body's immune response to prevent tumor growth [12]. We found that serum levels of IL-2, IL-5, IL-6, IL-12 in mice decreased significantly after radiation therapy. However, after additional treatment with Fuzi, serum levels of IL-2, IL-5, IL-6, IL-12 increased, which may promote the body's immune response and inhibit tumor growth. IL-10 and TGF-β exert anti-inflammatory effects, promote Treg generation, and suppress the release of macrophage and monocyte produced inflammatory cytokines [13, 14]. These cytokines have been confirmed to promote invasion and metastasis of tumors in animal models. In present study, treatment with radiotherapy combined with Fuzi reduced the production of IL-10 and TGF-β induced by radiation, which may explain how Fuzi regulates immune response to inhibit tumor growth and progression.

The physiological function of regulatory T (Treg) cells is the maintenance of tolerance to self-antigens and the suppression of autoimmune diseases, but Treg cells inhibit the development of efficient anticancer immune response [15, 16]. Tregs preferentially increase after radiation, and Tregs in a tumor context may assist in immune evasion during radiotherapy. Previous studies showed that IL-10 and TGF-β induced mouse CD4 cells to become Tregs [17]. In this study, the proportion of Tregs increased after radiation but was decreased after radiotherapy combined with Fuzi. In addition, we observed coincidental changes in Treg proportions and TGF-β and IL-10 levels. It is possible that Fuzi decreases the production of TGF-β and IL-10 and thus reduces the production of Tregs.

Immune escape is the primary reason for the occurrence, development and recurrence of lung cancer, and PD-L1, a member of the co-stimulatory molecule B7 super family, is one of the important molecules involved in tumor immune escape [18]. In present study, radiotherapy promoted PD-L1 mRNA and protein expression in tumors, while Fuzi reduced local tumor PD-L1 expression. Previous studies showed that the interaction between PD-L1 and its receptor PD-1 on activated T cells impeded T-cell receptor signaling pathway that can lead to the differentiation into Foxp3+ Tregs, indicating that PD-L1 has a pivotal role in regulating Treg development [19-21]. In addition, studies have shown that PD-L1 expression by tumor cells may induce and maintain Tregs in tumor microenvironment, thereby augmenting the suppression of anti-tumor T-cell responses and allowing tumor progression [22]. However, the signaling pathways by which Fuzi acts on PD-L1 and modulates Tregs remain unclear and need further investigation.

In conclusion, we found that Fuzi combined with radiotherapy achieve significant anti-tumor effects, and Fuzi enhances immune response and weakens immune suppression and immune escape induced by radiotherapy. Fuzi is a promising radiosensitizer for adjunct therapy for lung cancer.

This work is supported by the Key Subject Construction Program of Jinshan District Health Administrative Authority (2012-24-733).