Surgical resection remains the initial treatment of choice for the majority of early stage hepatocellular carcinoma (HCC) patients. Although the factors that influence the prognosis of postoperative HCC patients have been well elucidated, there are a limited number of simple, objective, and distinct methods for estimating survival for postoperative patients with solitary HCC within the Milan criteria and Child-Pugh (C-P) A cirrhosis. The Albumin-Bilirubin (ALBI) score is a new evidence-based approach to assess liver function. The ALBI score eliminates subjective variables, such as ascites and encephalopathy which are the requirements for the conventional C-P grading system. This study enrolled 654 patients to determine whether the ALBI score can predict the outcomes of postoperative solitary HCC patients within the Milan criteria and C-P A cirrhosis. Our results showed the ALBI score significantly influenced the overall survival and cumulative recurrence rates. Furthermore, the ALBI score was significantly related to the degree of liver cirrhosis and serum γ-glutamyl transpeptidase (GGT) concentration in solitary HCC cases within the Milan criteria and C-P A cirrhosis. Additionally, the combination of the ALBI score and serum GGT concentration contributed to the prognosis prediction in this cohort. In conclusion, we externally validated the ALBI grade as a novel biomarker to predict prognosis for solitary HCC within the Milan Criteria and C-P A cirrhosis.

Hepatocellular carcinoma (HCC) is the most common primary liver malignancy and predominantly occurs in patients with chronic liver diseases, such as chronic hepatitis viral infection [1]. The Barcelona Clinic Liver Cancer (BCLC) staging system is the most widely adopted staging system that provides guidelines for HCC treatment [2, 3]. According to the BCLC guidelines, patients with a solitary liver tumour or as many as 3 nodules ≤ 3 cm are classified as having very early or early-stage cancer [2, 4]. Liver transplantation is considered as the optimal treatment for patients with HCC within the Milan criteria, which includes a solitary HCC of up to 5 cm in size or of up to 3 tumours ≤ 3 cm [4]. The shortage of available organs and long waiting times prohibit clinical application of liver transplantation. Surgical resection remains the initial treatment of choice for most of early stage HCC patients because it is likely to yield a better prognosis than radiofrequency ablation (RFA) treatment [5, 6]. Previous studies have elucidated the factors that influence the prognosis of postoperative HCC patients [7-11].

The current prognostic models for HCC include parameters related to HCC, such as the tumour diameter, tumour number, presence of vascular invasion, and extent of tumour differentiation and lymph node metastasis [7, 8]. Previous studies have reported that there is a significantly different prognosis between early HCC patients within the Milan criteria and cases beyond this criterion [9, 10]. However, the factors that influence the prognosis of HCC patients within the Milan criteria are poorly understood.

Underlying liver function is another significant factor affecting the survival of HCC patients. Liver function is frequently assessed according to the Child-Pugh (C-P) system in HCC patients as a preoperative evaluation of the safety of hepatectomy [9-11]. The C-P system is based on a score derived from the following parameters: conventional liver function tests, degree of hepatic encephalopathy, and extent of ascites. However, this system has several limitations which have been reported by previous references [12, 13]. The Albumin-Bilirubin (ALBI) score is a new evidence-based approach that is used to assess liver function in HCC patients [13]. In this new model, subjective variables, such as ascites and encephalopathy which are the requirements for the conventional C-P grade system, are eliminated. The degree of accuracy achieved by the ALBI grade is considered equal to the accuracy obtained with the conventional C-P grade [13]. We performed this retrospective study to assess the value of the ALBI score for prognosis predictions of solitary HCC cases within the Milan criteria and C-P A cirrhosis because there is confusion regarding live functional assessments and there are no predictive measures for the prognosis of patients with solitary HCC within the Milan criteria.

We obtained approval for this retrospective study from the ethical committee of Zhongshan Hospital, Fudan University and Qilu Hospital, Shandong University. The study was performed in accordance with the approved guidelines and written informed consent for the use of the resected samples and clinical data. The study enrolled patients with newly diagnosed HCC within BCLC the early stages who received surgical resection at Zhongshan Hospital, Fudan University between Jan. 2005 and Dec. 2010, or at Qilu Hospital, Shandong University between Jan. 2009 and Dec. 2011.

The study inclusion criteria included the following: 1) primary solitary HCC within the Milan criteria; 2) curative resection of tumour lesions; 3) no lymph node involvement, no vascular invasion, and no distant metastasis; 4) cirrhosis confirmed by postoperative pathology; and 5) preoperative liver function assessed as the C-P A stage. Follow-up, diagnosis, and treatment of recurrent tumours were performed as described in our previous studies [2, 14, 15].

The clinicopathological factors potentially related to tumour recurrence and overall survival (OS) were selected based on our previous studies and included the following: gender, age, cirrhosis, the presence of a tumour capsule, tumour diameter, differentiation of tumour cells, and preoperative laboratory values which included the following: serum alanine aminotransferase concentration (ALT ≤75 U/L or >75 U/L), serum a-fetoprotein concentration (AFP ≤400 ng/mL or >400 ng/mL), and serum γ-glutamyl transpeptidase concentration (GGT ≤50 U/L or >50 U/L). If multiple preoperative serum values were available, the values collected closest to the time of resection were analysed [2, 14, 15].

The continuous variables are expressed as the mean (±sd) or median (range). The categorical variables were compared with the χ2 test or Fisher's exact test. All P-values <0.05 were considered to be significant. A univariate survival analysis was performed using the Kaplan-Meier method, and the difference between groups was analysed with the log-rank test. The relative prognostic significance of the variables in predicting the OS and disease-free survival (DFS) was assessed by univariate and multivariate Cox proportional hazards regression models. All statistical analyses of the data were performed using SPSS 21 for Windows (SPSS, Chicago, IL).

This study enrolled 654 HCC patients who met the inclusion criteria and underwent hepatectomy at Zhongshan Hospital, Fudan University between Jan. 2005 and Dec. 2010, or at Qilu Hospital, Shandong University between Jan. 2009 and Dec. 2011. There were 606 (92.66%) patients who were positive for the hepatitis surface B antigen alone and 4 (0.61%) patients were positive for the hepatitis C antibody alone. Additionally, 7 (1.07%) patients were infected with both hepatitis B virus (HBV) and hepatitis C virus (HCV).

The very early stage HCC cases in the BCLC staging system were defined as a solitary lesion ≤ 2 cm (without macrovascular invasion or extrahepatic spread) and preserved liver function [4]. Therefore, we used 2 cm as the cut-off value of the tumour diameter.

Univariate and multivariate analysis of prognostic factors of OS for the patients with solitary HCC within the Milan criteria and C-P A cirrhosis.

We also examined the correlations between the ALBI score and clinicopathological parameters of this patient cohort. We found that the ALBI score of the patients with solitary HCC within Milan criteria and C-P A cirrhosis was significantly related to the degree of liver cirrhosis (p<0.001) and serum GGT concentration (p<0.001). This finding was not related to sex, age, serum ALT concentration, serum AFP concentration, or degree of tumour cell differentiation. In our cohort, HCC patients with severe cirrhosis had significantly higher ALBI scores (stage II) (Table 3).

Univariate and multivariate analysis of prognostic factors of DFS for the patients with solitary HCC within the Milan criteria and C-P A cirrhosis.

Clinical features for the patients with solitary HCC within the Milan criteria and C-P A cirrhosis.

Cirrhosis-related liver dysfunction is a major cause of death in HCC patients [16, 17]. Clinically, patients with liver dysfunction rarely display evidence of significant coagulopathy, refractory ascites, or encephalopathy and it is difficult to evaluate preserved liver function. Liver function is currently graded according to the C-P system, which relies on individual parameters that are scored based on arbitrarily defined, predetermined cut-off points.

The new ALBI approach is an alternative measure of liver function based solely on albumin and bilirubin, which can avoid inter-observer variation and may highlight distinct subgroups within C-P A cirrhosis. Several studies have analysed the prognostic value of the ALBI score in postoperative HCC patients and have proposed its integration with routine prognostic models, including the BCLC [18-20]. Pinato and colleagues used a stage-stratified approach to investigate the prognostic ability of the ALBI score in both curative and palliative settings. The results demonstrated an adequate and clinically meaningful stratifying potential for the score across HCC BCLC stages [18]. Ma et al. also demonstrated the ALBI grade predicted prognosis after curative resection of patients with early HCC [19]. However, eligible HCC patients were enrolled in the studies irrespective of tumour diameters and cirrhosis. These factors could have influenced the survival outcomes of HCC patients [9-11].

In contrast to previous reports, our study analysed the role of the ALBI score in predicting outcomes for postoperative solitary HCC ≤ 5 cm and with C-P A cirrhosis. Our results suggested that the ALBI score is significantly related to the degree of liver cirrhosis and is an independent risk factor that is associated with the OS and DFS. Importantly, tumour diameter did not affect the prognosis of patients in this cohort. The ALBI score is superior to the C-P system in predicting the prognosis of patients with solitary HCC within the Milan criteria and C-P A cirrhosis.

GGT is a cell-surface enzyme that hydrolyses the gamma-glutamyl bond of extracellular reduced and oxidized glutathione. This initiates cleavage into glutamate, cysteine, and glycine [21, 22]. Several studies have reported that GGT is involved in tumour development, progression, and chemotherapy resistance by releasing reactive oxygen species, controlling of CpG island methylation, inducing DNA damage and genome instability [21-23]. Clinical studies have shown that increased serum GGT levels are independently associated with the risk of several solid malignancies and always serve as an important prognostic marker for worse OS [24-25]. The predictive value of GGT for HCC patients was shown in cases that underwent hepatectomy and in cases with unresectable HCC that received TACE or chemotherapy [26-28]. 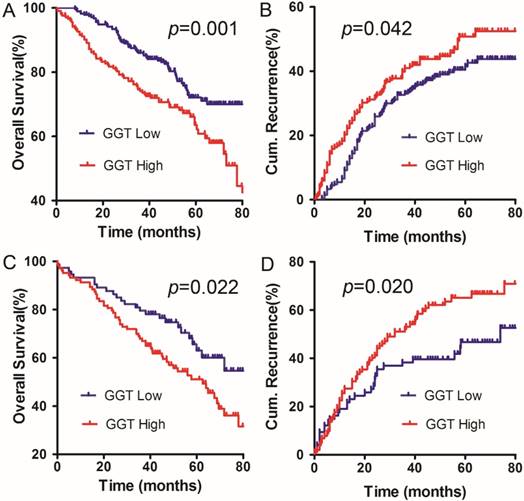 In our cohort, there were considerable patients with recurrent HCC received subsequent treatments including the following: surgery, RFA, TACE or/and PEI, radiotherapy, and systemic chemotherapy. These treatments may have an important role on overall survival.

In conclusion, our study demonstrated that the ALBI score is a significant prognostic factor correlated with the degree of liver cirrhosis for patients with solitary HCC within the Milan criteria and C-P A cirrhosis. The combination of the ALBI score and serum GGT concentration could be used to screen HCC populations within our criteria and determine who would be vulnerable to postoperative intrahepatic recurrence.

3. Moore A, Cohen-Naftaly M, Benjaminov O. et al. Radiotherapy and Sorafenib in the Management of Patients with Hepatocellular Carcinoma Have Led to Improved Survival: A Single Center Experience. J Cancer. 2016;7(8):883-889