Objective: The purpose of this study was to evaluate the efficacy and feasibility of the R.E.N.A.L. Nephrometry Score to postoperatively predict high-grade clear-cell renal carcinoma (ccRCC).

Conclusion: Tumor size, as well as R, E, and L scores were independent prognostic factors for high-grade pathology. Lager tumor sizes and higher R, E and L scores were more likely to be associated with high-grade pathological outcomes. Thus, the R.E.N.A.L. Score is of practical significance in facilitating urologists to make therapeutic decisions.

Fuhrman grades are the most commonly used histologic grade for renal carcinoma [1]. For patients with clear-cell renal cell carcinoma (ccRCC), Fuhrman grades of I-II are associated with better prognosis, and nephron sparing surgery can be performed safely and with minimal morbidity in these patients. However, ccRCC patients with Fuhrman grades of III-IV are associated with poor prognosis and high morbidity [2, 3]. Scosyrev et al. reported that nephron-sparing surgery was correlated with reduced overall survival (OS) compared with radical nephrectomy (RN) (hazard ratio: 1.50; 95% confidence interval (CI), 1.03-2.16) [4]. Patients with higher ccRCC stages who underwent partial nephrectomy (PN) were associated with worse clinicopathological outcomes [5]. Van et al. also reported that PN seems to be significantly less effective than RN with respect to OS [6]. Meanwhile, Leibovich et al. reported that patients who underwent RN were less likely to have recurrence compared with those underwent PN [7]. Additionally, Larcher et al. showed that PN did not improve other-cause survival relative to RN consistently in all renal carcinoma patients [8]. Fuhrman grade III-IV is treated as an independent predictor of late recurrence 5 years after surgery in RCC patients [9]. Thus, PN use should be more selective, and Fuhrman grade should be considered by urologists when making therapeutic decisions [10]. For the sake of good therapeutic efficacy, it is of grave importance and practical significance to accurately predict the pathological stage of renal masses upon diagnosis.

Our study was approved by the Ethical Committee and Institutional Review Board of the First Affiliated Hospital of Fujian Medical University. This study enrolled 288 ccRCC patients with complete CT/CTA data who underwent renal surgery at our center between January 2012 and December 2015. Renal surgery consisted of nephron sparing surgery and RN. Only unilateral, unifocal, and pathologically confirmed ccRCCs were included. Unilateral multifocal tumors, bilateral multifocal tumors, cystic renal tumors, local or distant metastasis tumors and polycystic kidney disease were excluded. Additionally, patients who underwent biopsy of renal masses prior to surgery were also excluded. Patients with ccRCC that was discovered by physical examination were considered the asymptomatic group. Patients with hematuria, flank pain or abdominal masses were classified as the symptomatic group. RCC stage was assigned by surgical pathology based on the American Joint Committee on Cancer (AJCC) 2010 TNM classification. Fuhrman grade I and II were classified as low Fuhrman grade (LFG), and Fuhrman grade III and IV were classified as high Fuhrman grade (HFG) [3, 12].

Radiographic features of the renal masses were evaluated and scored using the R.E.N.A.L. Nephrometry Score. Each component of Nephrometry was compared with the histology and grade of resected renal masses to validate whether radiographic features of renal masses could predict renal tumor pathology [12]. Imaging characteristics of all cases were evaluated by two residents at our center using the R.E.N.A.L scoring system. Disagreements were resolved by a third attending urologist. Demographic features, radiographic characteristics of the renal masses prior to surgery, surgical modalities, clinical and pathological stage, total Nephrometry Score and individual anatomic descriptor components were also summarized. The relationship between pathological grade and clinicopathological characteristics mentioned above were evaluated. Statistical analysis was conducted using SPSS 18.0 (SPSS Inc., Chicago, IL, USA). The chi-square test was used to compare qualitative variables; other comparisons were made using appropriate statistical tests. Student's t test was performed to compare continuous variables. Multivariable logistic regression was performed to determine predictors of the postoperative pathological grade of renal masses, and receiver operating characteristic curves (ROC) were further constructed. P < 0.05 was considered statistically significant for all tests [13].

Comparison of clinicopathological characteristics of cases with different fuhrman grade.

2Nearness of the tumor to the collecting system or sinus; ERLN, enlargement of lymph node. 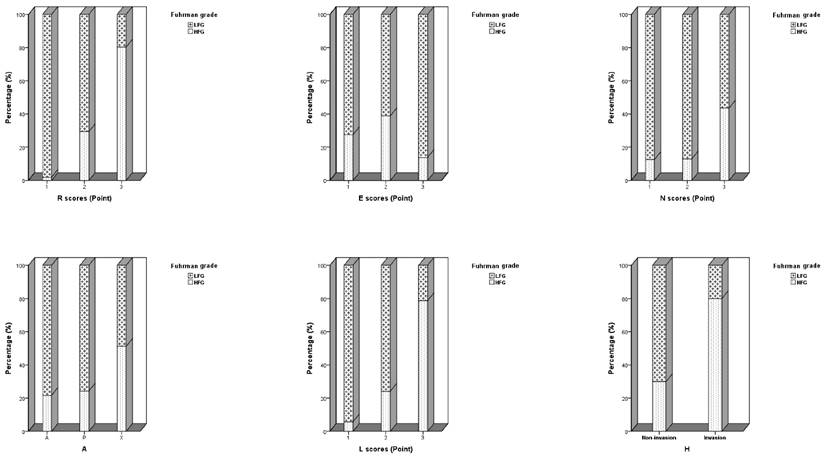 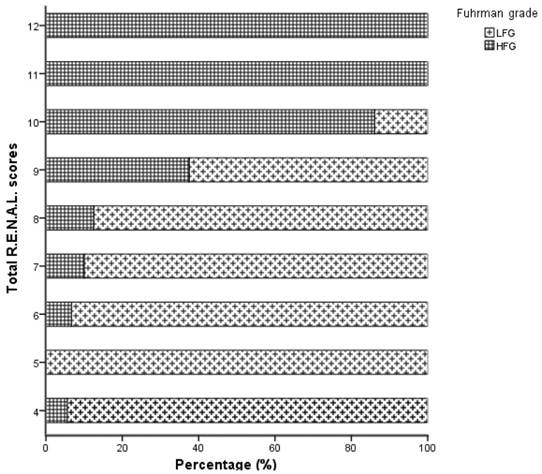 Radiographic imaging represents the cornerstone of pre-surgical diagnosis. However, it is difficult to preoperatively predict pathological grade via image testing. In nearly 70%-80% of renal mass biopsies the grading was well defined; however, the rate of consistency between histological biopsies and postoperative findings can be lower than 46% for pathological grade [14, 15]. Wunderlich [16] et al. reported that 15% of cases could not be correctly graded according to the final pathological results. The rates of biopsies that underestimated the nuclear grade were higher than 55% [17]. Additionally, rare complications often accompany solid renal mass biopsies, such as pneumothorax and bleeding. Furthermore, biopsies may facilitate tumor seeding along the needle tract [18]. Tumor grading is of vital importance for therapeutic decisions and prognostic evaluations [19]. Thus, it is difficult to find an effective model to preoperatively predict the pathological grade of renal masses.

This study demonstrates that there is a relationship between preoperative radiographic features and final pathological outcomes [23-25]. The individual anatomic descriptor components of Nephrometry Score and pathological grade of ccRCC were analyzed. This demonstrated that the largest tumor diameter, radius, exophytic/endophytic properties, and the location relative to the polar lines were independent prognostic factors for postoperatively predicting HFG.

Logistic regression analysis for the relationship between the anatomic descriptor components of the Nephrometry score and Fuhrman grade. 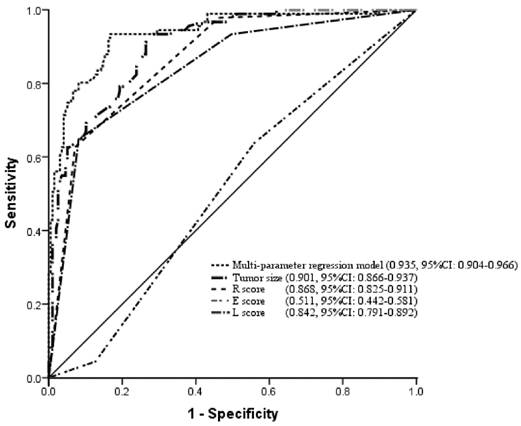 The areas under the ROC curve with respect to multi parameter regression model, maximal diameter, radius, exophytic/endophytic properties, and location relative to the polar line were calculated and compared.

E and L scores were also independent predictive factors for high-grade disease. Among ccRCCs with exophytic/endophytic properties below 50%, endophytic tumors tended to be classified as HFG, while exophytic tumors tended to be classified as LFG. In this study, L score equals to 3 points was more likely to be classified as HFG than those that scored 1 point, which indicated that location relative to the polar lines was associated with higher pathological grade. Some studies have revealed a strong relationship between R.E.N.A.L. Nephrometry Scores and high-grade features. For example, Kutikov et al. [12] compared individual components of the R.E.N.A.L. Nephrometry Score with grade in 525 resected tumors. Consistent with our study, their results demonstrated that R score (p < 0.0001), E score (p = 0.041) and L score (p = 0.002) were strongly associated with high-grade histology. Venkatesh et al. [24] demonstrated that the fraction of tumors with high Fuhrman grades was only 3.7% among exophytic malignancies compared with 25% of endophytic renal masses, while 96% of highly exophytic malignant tumors were low-grade carcinomas. Shim et al. [31] demonstrated that hilar location, which is defined as abutting the main renal artery and/or vein or its segmental branches, was associated with higher grade renal masses compared with non-hilar location. Previous studies [12, 23, 31] have indicated that the location of renal masses is associated with histological subtype. It has also been reported that a high percentage of endophytic tumors were of clear cell histology [32, 33].

The mechanisms of how E and L scores are related to high Fuhrman grades have not been elucidated. Tumors that invaded the collecting system were associated with higher Fuhrman grade and reduced survival, which has been validated by previous studies. The renal sinus and collection systems are more likely to be invaded by renal tumors, which leads to L scores of 3 points [23, 32]. The renal sinus is composed of numerous small thin-walled venous channels and lymphatics, and there is no capsule separating the renal parenchyma from the renal sinus. We hypothesize that higher E and L scores are more likely to be observed in high grade tumors that involve the renal sinus and exhibit venous invasion. The abundant blood supply and oxygen may facilitate tumor colonization and growth, which may contribute to tumor aggressiveness [34]. This may be a potential mechanism of how higher E and L scores correlate with high-grade renal tumors.

Overall, this study uncovered that the accuracy of prediction was 0.935 using multivariable logistic regression via ROC curves, which indicated that larger tumor size, location relative to the polar lines and endophytic tumors were more likely to be classified as HFG. This is of great practical importance for preoperatively predicting ccRCC grade. Using these data, the R.E.N.A.L. Nephrometry Score was developed with the aim of predicting the Fuhrman grade of ccRCC before intervention. R.E.N.A.L. Nephrometry Scores can accurately discriminate patients with high or low Fuhrman grades, which will help urologists choose appropriate therapies for patients.

This study demonstrated that larger tumors, location relative to the polar lines and endophytic tumors were more likely to be classified as higher Fuhrman grade. The R.E.N.A.L. Nephrometry Score represents a novel tool that can help urologists preoperatively predict the Fuhrman grade of renal masses and make therapeutic decisions. However, well designed randomized controlled trials are needed to make comparable results.