Background: This study evaluated the survival outcomes and toxicities of intensity-modulated radiation therapy (IMRT) based on the RTOG 0225/0615 RT protocols in patients with nasopharyngeal carcinoma (NPC) from a region of China where this tumor type is endemic.

Conclusions: The RTOG IMRT protocols are feasible for patients with NPC from the endemic regions of China.

Unlike other carcinomas of the head and neck, nasopharyngeal carcinoma (NPC) has an extremely unbalanced incidence. NPC is rare (0.5/105 cases among males per year) in the majority of white populations but is more common in China, with an incidence of 20-50/105 males per year in southern China1. In these endemic areas, more than 95% of cases are non-keratinizing NPC2, 3, which is sensitive to radiotherapy (RT) and chemotherapy. Therefore, RT is the main treatment method for non-metastatic NPC and concurrent chemotherapy is recommended for local-regionally advanced NPC 4-7.

Intensity-modulated radiation therapy (IMRT) is commonly used worldwide to treat NPC. Compared to two-dimensional RT (2-DRT) and three-dimensional conformal RT (3-DCRT), IMRT provides a higher and more conformal radiation dose while effectively decreasing the dose to surrounding normal tissues. Therefore, IMRT not only results in excellent local control in NPC, but also significantly reduces RT-related late toxicities 8-11. However, the design of the RT plan is one of the most important components of treatment for NPC.

Both protocols devised by the Radiation Therapy Oncology Group (RTOG), RTOG 0225 and RTOG 0615, recommend a detailed RT plan for NPC. These trials resulted in excellent loco-regional control and encouragingly low rates of grade 3-4 acute toxicities in patients from the non-endemic regions12, 13. Therefore, the RTOG RT plan has been widely accepted14, 15. However, the reduced-target-volume IMRT (RTV-IMRT) RT plan is also widely used in the regions of China where NPC is endemic16. The RTV-IMRT and RTOG RT plans have different prescribed doses, single RT doses and clinical target volume (CTV) delineation strategies, as well as other variations. Follow-up studies have confirmed the RTV-IMRT provides favorable treatment outcomes with acceptable toxicities in patients from endemic regions 17, 18.

However, there are few reports on application of the RTOG RT protocols in patients from the regions of China where NPC is endemic. Therefore, we initiated a retrospective study of a large cohort of patients from an endemic region of China to evaluate the survival outcomes and toxicities of the IMRT treatment plan of the RTOG 0225 and RTOG 0615 protocols.

The Institutional Review Board of First People's Hospital of Foshan Affiliated to Sun Yat-sen University approved this retrospective analysis of clinical routine data; an exemption from requiring written informed consent was granted. All 455 consecutive patients with newly-diagnosed, histologically-proven, non-metastatic NPC treated by IMRT based on the RTOG 0225/0615 RT protocols at our cancer center between April 2010 and March 2014 were included. All cases had the non-keratinizing pathological type. The cohort included 347 males and 108 females (male:female ratio, 3.2:1), with a median age of 45 years (17-80 years).

Patients were assessed every three months during first two years after RT, and every six months thereafter. Imaging methods including a MRI scan of the nasopharynx and neck, chest X-ray and abdominal sonography were recommended at 3-4 months after RT, every six months during the first three years, every year during the first 3-5 years, and as necessary thereafter. Chemotherapy-related toxicities were graded using the Common Terminology Criteria for Adverse Events (CTCAE), version 3.0. Acute and late RT-related toxicities were graded based on the Radiation Morbidity Scoring Criteria of the RTOG. Radiation-induced temporal lobe injury (TLI) was diagnosed as white matter lesions, contrast-enhanced lesions or cysts in the temporal lobe on MRI, using criteria previously described by Zhou et al.20. A diagnosis of radiation-induced cranial nerve palsy (CNP) was based on the patient's history and physical examination, following the criteria described by Lin et al. 21.

All analyses were performed using SPSS software version 22.0 (IBM Corporation, Armonk, NY, USA). Actuarial rates were calculated using the Kaplan-Meier method and compared using the log-rank test. Multivariate analyses with the Cox proportional hazards model were used to identify significant independent prognostic factors by backward elimination. The parameters included in the Cox proportional hazards model were: age (≤ 45 vs. > 45 years), sex (male vs. female), chemotherapy (yes vs. no), additional RT boosts (yes vs. no), T category (T1-2 vs. T3-4) and N category (N0-1 vs. N2-3). The criterion for statistical significance was set at α = 0.05; P-values were based on two-sided tests.

Failure patterns for the 90 patients with nasopharyngeal carcinoma who experienced treatment failure. 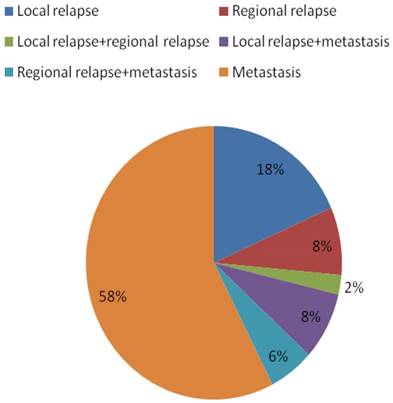 Overall survival and failure-free survival for 455 patients with nasopharyngeal carcinoma treated using IMRT based on the RTOG 0225 and RTOG 0615 protocols. 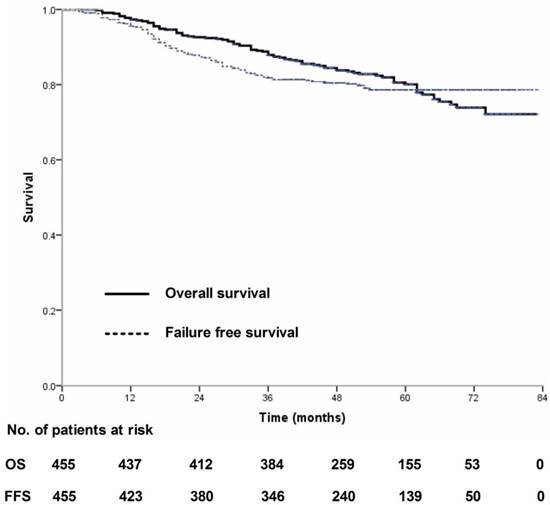 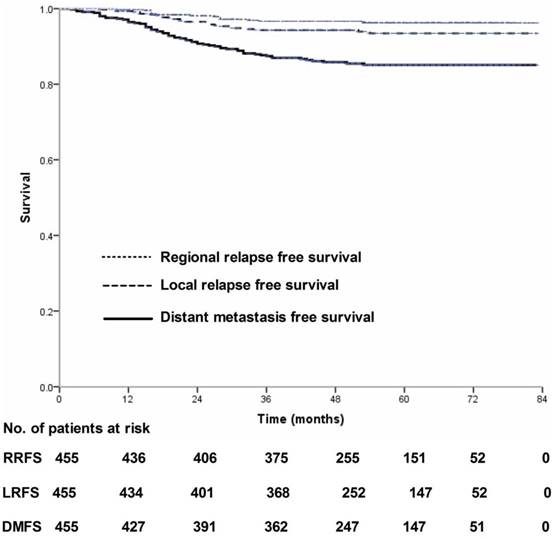 Multivariate analyses of prognostic factors in 455 patients with nasopharyngeal carcinoma

The RTOG 0225 and RTOG 0615 protocols for NPC provided good treatment outcomes and acceptable RT-related toxicities in patients from the non-endemic regions 12. However, it is imperative to apply these protocols to patients from the areas of China where NPC is endemic, and further assess long-term survival and late toxicities. To the best of our knowledge, this is the first study to evaluate the RTOG 0225 and RTOG 0615 RT protocol in patients from a region of China where is NPC endemic. Overall, local and regional controls were excellent and RT-related toxicities were acceptable. Metastasis remained the main treatment failure and in-field failures were the major loco-regional failure pattern.

Survival after IMRT based on the RTOG protocols

We further compared the survival outcomes in this study with patients treated using the RTV-IMRT protocols in China. Lin et al. reported estimated 3-year OS, LRFS, RRFS and DMFS were 90%, 95%, 98% and 90%, respectively 18. Sun et al. reported estimated 5-year disease specific survival, LRFS, RRFS and DMFS were 84.7%, 91.8%, 96.4% and 84.6%, respectively 23. Thus, the local control and regional control rates for patients treated using either the RTOG IMRT protocols or RTV-IMRT protocols are all very high. Metastasis was the main pattern of treatment failure in all studies, reflecting the change in failure patterns in NPC after the widespread introduction of IMRT 24, 25.

Loco-regional relapse after IMRT based on the RTOG protocols

Acute and late toxicities of IMRT based on the RTOG protocol

This study demonstrated the RTOG 0225 and RTOG 0615 IMRT protocols are feasible for patients from the areas of China where NPC is endemic. However, this was a retrospective study of consecutive patients; therefore, different induction/adjuvant chemotherapy and concurrent chemotherapy regimens were employed, which may affect survival outcomes and treatment-related toxicities in addition to IMRT protocol 38, 39. Moreover, this was a retrospective study of single-institution data, which needs to be confirmed by multicenter studies.

This study demonstrates the RTOG 0225 and RTOG 0615 IMRT protocols provide encouraging survival outcomes and acceptable RT-related toxicities in patients with NPC from a region of China where is NPC endemic. Distant metastasis is still the biggest obstacle to treatment success; further studies are required to address this issue in NPC.

22. Marks JE, Phillips JL, Menck HR. The National Cancer Data Base report on the relationship of race and national origin to the histology of nasopharyngeal carcinoma. Cancer. 1998;83:582-8