Methods: We retrospectively analyzed NSCLCs treated with first generation of TKI from June 2009 to October 2014 in our cancer center. Number of progressive lesions upon first progression was recorded per RECIST v1.1.

Results: Sixty-one of 144 (42.4%) patients progressed with one lesion. Postprogression TKI use information was available in 58 patients. No brain metastases and stable disease compared to immediate prior scans were associated continued TKI. In the whole cohort, TKI as the first line treatment was found to be associated with longer postprogression survival, but TKI continuation was not. In patients with exon 19 deletion, TKI continuation compared to discontinuation was significantly associated with longer postprogression survival (32.0 months, 95% CI: 20.8 - 43.3 vs. 15.6 months, 95% CI: 7.3 - 23.8, p=0.013). This difference was not observed in L858R mutation. Exon 19 deletion patients had longer time to TKI cessation after progression (13.7 months, 95% CI: 4.5-22.9 vs. 5.6 months in L858R, 95% CI: 0.0-11.9, p = 0.047).

Conclusions: TKI continuation may prolong survival of NSCLCs with exon 19 deletion rather than L858R. Further studies are required to validate this finding.

Epidermal growth factor receptor (EGFR) tyrosine kinase inhibitor (TKI) has revolutionized the treatment of non-small cell lung cancer (NSCLC) with EGFR mutation and has become the standard of care in such patients1. However, almost all patients eventually develop resistance 2.

It has been suggested that a subgroup of patients may benefit from TKI continuation despite objective progression, but the criteria of patient selection remain largely unknown. Three clinical resistant modes were proposed based on a cohort of Chinese patients - dramatic, progressive, and local progression3. Of great interest, longer postprogression survival was found in patients who had received postprogression TKI compared to chemotherapy. A large single arm trial in Asia showed remarkable second progression-free survival (PFS) of 14 months in patients who continued erlotinib after first progression. In this study, choice of erlotinib continuation was not standardized, but was based on decisions of treating physicians, so it remains unclear who would benefit.

T790M mutation is responsible for the majority of resistance4-6. It was found to be heterogeneous even among different tumor foci in an individual patient, indicating that some tumors may be still sensitive to first generation of TKI after another population of tumor cells have developed resistance7.

However, a recently published randomized phase III trial demonstrated no benefit of continuing gefitinib after objective progression, highlighting the role of correct patient selection in making a decision on continuation or not8.

National Comprehensive Cancer Network guideline recently included continuation of first generation of TKI after solitary progression in conjunction with local therapy as one of the treatment options if symptomatic9. In this study, we aimed to investigate the benefit of continuing first generation of TKI in patients with solitary progression and to explore factors that may assist patient selection.

PFS was defined from first TKI initiation till objective progression and/or death. Longer PFS was defined as a PFS longer than the median PFS of patients with solitary progression. Change of scanning at the time of progression compared to immediate preceding scan was recorded as stable disease (SD) or progressive disease (PD) per RECIST 1.1 and was considered a surrogate clinical index of tumor growth rate. The followings were considered as definitive local therapy after progression: 1) surgical resection; 2) conventional fractionated radiotherapy with a total dose >= 50 Gy; 3) stereotactic body radiotherapy with a biological equivalent dose >=100 Gy; and 4) stereotactic radiosurgery to brain metastases. Solitary progression was defined as only a single lesion progress and the rest of lesions were stable in patients with multisite lesions.

Three first generation EGFR-TKIs have been approved in China: gefitinib, erlotinib, and icotinib. Patients who switched to another TKI after objective progression were still considered as TKI continuation. TKI continuation was defined as no cessation of TKI use for more than one month after progression. Age, gender, smoking history, line of TKI, ECOG performance status, new/original site progression, presence of brain metastasis, and chemotherapy use were also collected. Chemotherapy given within 2 month postprogression was considered as immediate.

Postprogression survival was defined as from first objective TKI progression till any causes of death. Chi-square or Fisher's exact test was used to analyze factors associated with TKI continuation. Survival was estimated by Kaplan-Meier method and compared by logrank test. Multivariate analyses of factors associated with postprogression survival was performed by Cox regression test with forward conditional method. All statistical analyses were performed by IBM SPSS Statistics v22.

Patient characteristics were summarized in Table 1. Demographical distribution of smoking history and histology is consistent with the previous reports of patients with EGFR mutation. EGFR-TKI was the first line of systemic treatment in 43 (74.1%) patients. 41 (70.7%) patients progressed in an original site and 39 (67.2%) had stable disease compared to preceding scan. 12 (20.7%) patients received definitive local therapy either to primary or metastatic lesions after progression, but none received both. All definitive metastatic local therapies were stereotactic radiosurgery to brain lesions. 5 of 32 patients with exon 19 deletion received definitive local therapy; while 6 of 26 L858R received. No patient received radiofrequency ablation after progression. One patient received AZD9291, but no other patients received third generation of TKI.

Postprogression survival in the whole cohort

In patients with exon 19 deletion mutation, TKI continuation was associated with significantly longer postprogression survival (32.0 months, 95% CI: 20.8 - 43.3 vs. 15.6 months, 95% CI: 7.3 - 23.8, p=0.013). Among other factors, line of TKI was also significant (Table 3). On multivariate analyses, only TKI continuation remained significant (p=0.023). However, in patients with L858R mutation, no benefit of continuing TKI was observed. SD compared to immediate prior scan, original site failure and no brain metastases were associated with longer postprogression survival on multivariate analyses in L858R mutation patients. 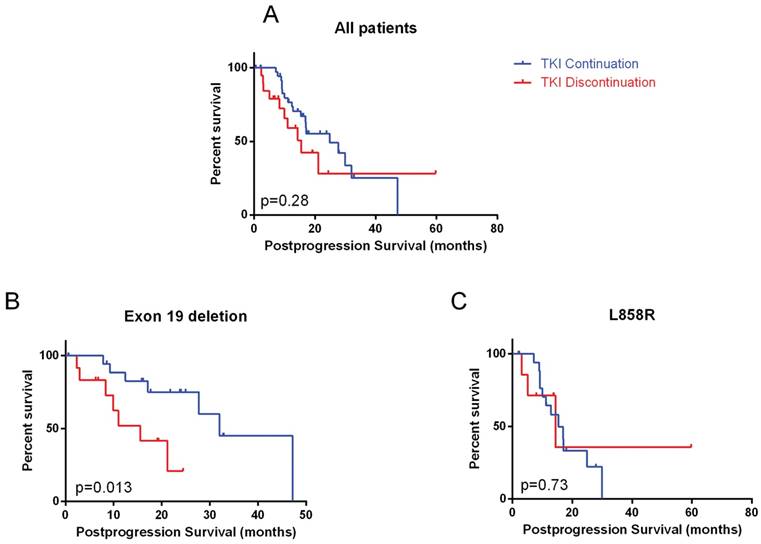 Although both are common, exon 19 deletion and L858R have been considered to be different in its biology and treatment response to TKI. A pooled analysis of LUNX-LUNG 3 and 6 demonstrated overall survival benefit of afatinib, an EGFR-TKI in exon 19 deletion patients, but not in L858R over chemotherapy11. A meta-analysis of 7 randomized trials also found 50% greater PFS benefit of exon 19 deletion compared to patients with L858R. This efficacy difference may be explained by a greater degree of EGFR phosphorylation inhibition by gefitinib in a preclinical study12. However, whether this difference exists in patients who continues TKI after progression has been largely unknown. 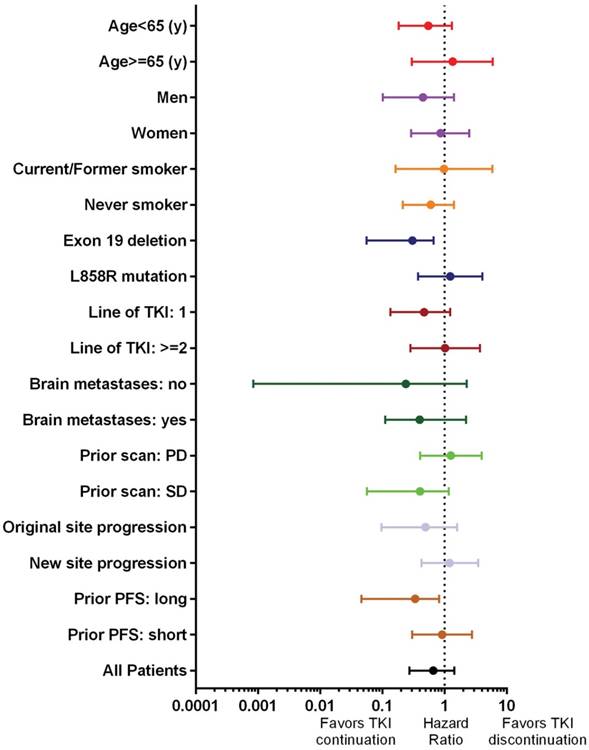 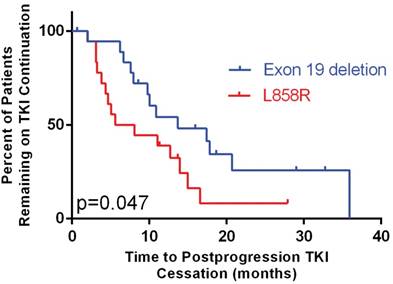 The benefit of TKI continuation after progression has not been confirmed. Neither consensus on patient selection criteria has been reached. The IMPRESS study demonstrated no benefit of gefitinib continuation in unselected patients8. The post-resistance PFS was 5.4 months, identical between patients with or without gefitinib continuation. Interestingly, its subgroup analysis showed a trend toward a longer second PFS in patients with exon 19 deletion over L858R mutation, but overall survival result has not been reported. The ASPIRATION study, a single-arm phase II trial showed that in patients selected by treating physicians, the postprogression PFS by erlotinib continuation was 14.1 months, which was even numerically longer than the first PFS (11.0 months)13. The discrepancy between IMPRESS and ASPIRATION studies suggests that with the right selection, TKI may still be beneficial in a subgroup of patients. However, the selection criteria remain largely unknown. Subgroup analysis of this study showed that patients with exon 19 deletion and long prior PFS benefited from TKI continuation (Figure 2). Because of the objective nature of mutation type, we therefore chose exon 19 deletion for further analysis.

Salvage local therapy has been used increasingly in selected asymptomatic patients with limited number of progressive lesions, good performance status, and small number of total metastatic burdens. A retrospective analysis from a single institution showed that oligometastatic and solitary progressive EGFR mutant patients achieved an impressive 10 months of median time to progression after local therapy14. They also reported the median time until a subsequent change in systemic therapy was 22 months. The benefit of local therapy has been reported by other studies as well15, 16. The latest NCCN guideline included local therapy beyond focal progression as a treatment option9. However, it is hard to determine the benefit of local therapy in this cohort of patients, because of the small number of patients who received definitive local therapy.

In conclusion, this study showed that in EGFR-mutant patients with solitary progression, EGFR TKI continuation compared to discontinuation was associated with longer postprogression survival in exon 19 deletion patients, but not in L858R and unselected patients. Time to TKI cessation was also significantly longer in patients with exon 19 deletion. This result should be validated in larger and prospective studies.

All procedures performed in studies involving human participants were in accordance with the ethical standards of the institutional and/or national research committee and with the 1964 Helsinki declaration and its later amendments or comparable ethical standards. For this type of study formal consent is not required.

2. Zhou C, Yao LD. Strategies to Improve Outcomes of Patients with EGRF-Mutant Non-Small Cell Lung Cancer: Review of the Literature. Journal of thoracic oncology: official publication of the International Association for the Study of Lung Cancer. 2016;11:174-186

6. Yu HA, Arcila ME, Rekhtman N. et al. Analysis of tumor specimens at the time of acquired resistance to EGFR-TKI therapy in 155 patients with EGFR-mutant lung cancers. Clinical cancer research: an official journal of the American Association for Cancer Research. 2013;19:2240-2247