Lung cancer is a highly lethal and extremely common cancer worldwide. In China, during the past 30 years, mortality from lung cancer has increased by 465%[1]. Cancer Statistics 2017 reported that the overall 5-year survival rate of lung cancer patients was approximately 18% [2]. However, even at the same stage, the prognosis of patients varies a lot. Non-small cell lung cancer (NSCLC), of which squamous cell carcinoma (SCC) and adenocarcinoma (ADC) account for the vast majority of cases, represents almost 80% of primary lung cancer cases [3]. Nowadays, no robust biomarkers have been applied to clinical practice to provide prognostic evaluation of lung cancer. Minichromosome maintenance (MCM) proteins are essential components for DNA replication, and also prognostic markers for various human tumors. Our previous work has showed that MCM7 over-expression was an adverse marker for overall survival of NSCLC patients, even for early-stage ones [4]. In the present study, we evaluated the expression levels of MCM2, MCM5, MCM6 and their clinical significance in NSCLC.

A total of 571 surgically resected NSCLC tissues were collected at the Cancer Hospital, Chinese Academy of Medical Sciences and Peking Union Medical College (CAMS & PUMC), in Beijing, China from 2005 to 2010. The tissue samples were collected shortly after radical surgery of NSCLC patients, among whom 402 (70.4%) had early-stage disease (stage I-II) and included 209 SCCs and 193 ADCs. Primary tumor regions were excised by experienced pathologists. For construction of microarrays, tissues were routinely fixed with neutral buffered formalin (pH 7.4) and paraffin-embedded. All the samples used in this study were residual specimens after diagnosis sampling. And all patients received no treatment before surgery and signed separate informed consent forms for sampling and research. This study was approved by the Ethics Committee/Institutional Review Board of the National Cancer Center/Cancer Hospital, PUMC/CAMS (No. 12-098/632). And all the methods in our study were carried out in accordance with the approved guidelines. Survival data were available with a median follow-up of 785 days (range 21~2,195 days). The clinico-pathologic characteristics of the patients are summarized in Table 1.

The TMA was constructed as described previously. For each case, three cancer tissue cores (diameter = 1 mm; height = 5 mm) were taken from the primary block.

IHC was performed on the 4-μm sections of the resulting TMA block. The slides were deparaffinized, rehydrated, immersed in 3% hydrogen peroxide solution for 15 min, heated in citrate buffer (pH 6.0) for 25 min at 95℃, and cooled for 60 min at room temperature. In between each incubation step, sections were washed with PBS (pH 7.4). The slides were blocked with 10% normal goat serum for 30 min at 37℃ and washed and incubated overnight at 4℃ with mouse monoclonal antibody against MCM2 (1:200; 10513-1-AP, Proteintech Group, Inc. Chicago, IL, USA), MCM5 (1:200; 11703-1-AP, Proteintech Group, Inc. Chicago, IL, USA), or MCM6 (1:200; 13347-2-AP, Proteintech Group, Inc. Chicago, IL, USA). Slides with no primary antibodies added served as negative controls. After washing with PBS, the slides were visualized using the PV-9000 Polymer Detection System following the manufacturer's instructions (GBI, USA) and subsequently counterstained with hematoxylin.

a Tumor stage was classified according to the 7th edition of the International Union against Cancer (UICC) Tumor Node Metastasis (TNM) classification of malignant tumors.

b Family history of lung cancer in a first-degree relative.

The expression levels of MCM2, MCM5 and MCM6 were assessed by the labeling index (LI) determined by counting the number of distinctly stained malignant cells, regardless of the intensity, divided by the total number of tumor cells [5]. Proteins were evaluated in the areas of highest positivity and at least 1000 tumor cells were counted. The average of the percentage of positive cells in the three cores represented the final score of the sample, yielding a continuous score from 0 to 100. All cases were divided into two groups, a strongly positive group (score range: 50-100) and a low/no expression group (score range: 0-50). Assessment and imaging of IHC was performed using a Leica DM2000 microscope equipped with Leica DFC Cameras-Image Acquisition System (software V3.5.0, Switzerland).

All analyses were performed using PASW Statistics 18 (SPSS Inc., Chicago). Associations between protein expression and clinico-pathologic parameters were assessed by the Mann-Whitney test and the Kruskal-Wallis test. For survival analyses, Kaplan-Meier survival curves were constructed, and differences were tested by the log-rank test. Overall survival was defined as the time between the date of surgery and the date of death from lung cancer or the date of last contact. The data of patients alive at the end of the study were censored. Multiple Cox proportional hazards regression (backward, stepwise) was performed to identify the independent factors with a significant impact on patient survival. The hazard ratios (HRs) and 95% confidence intervals of the prognostic factors were calculated. All P values were two-sided, and the results were considered significant if P < 0.05.

Expression status of MCM2, MCM5 and MCM6 in NSCLC tissue samples Representative immunohistochemical microphotographs of MCM2 (a,b,c), MCM5 (d,e,f) and MCM6 (g,h,i) with high (positive) and low (negative) expression in NSCLC and their adjacent non-malignant tissues. The subtypes are SCCs (b, e, h) and ADCs (c, f, i). Bar = 100μm. 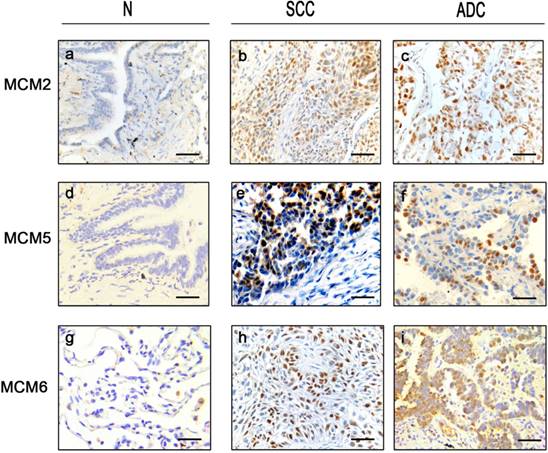 Correlation of MCM2, MCM5 and MCM6 LIs with NSCLC patients' overall survival (OS) Kaplan-Meier curves showing the association between LIs of MCM2 (A), MCM5 (B), MCM6 (C) and OS in different stages and in different histological tumor types in tissue samples. All the P values are shown in the graph, by log-rank test.

a Mann-Whitney test. b Kruskal-Wallis test.

The impact of protein expression on overall survival (OS)

In tissue samples, Kaplan-Meier analysis indicated that early-stage (stage I/II) patients with higher MCM2 LIs had a lower OS compared to those with lower LIs of the protein (P = 0.021). In late-stage patients, MCM6 overexpression was correlated with a poor overall survival (P = 0.048). Considering the different histological tumor types, the OS of the higher MCM5 LIs group was poorer than that of the lower MCM5 LIs group in SCCs for all stages (P = 0.015) (Fig. 2).

Effect of protein expression on survival by Cox regression analysis

Transcript levels of MCM2, MCM5 and MCM6 in NSCLC tissues and correlation with OS 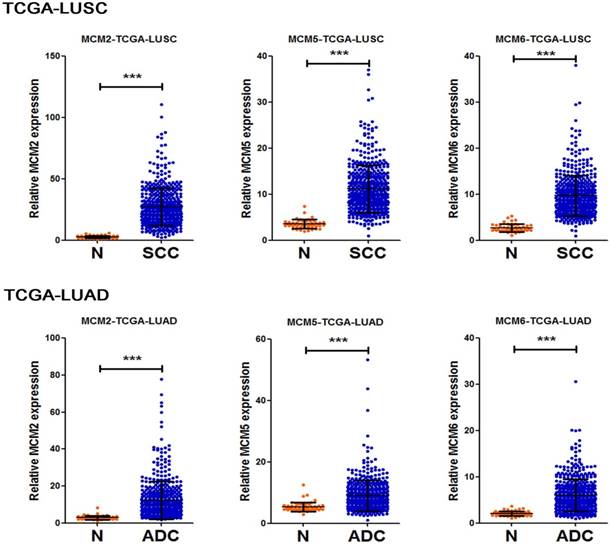 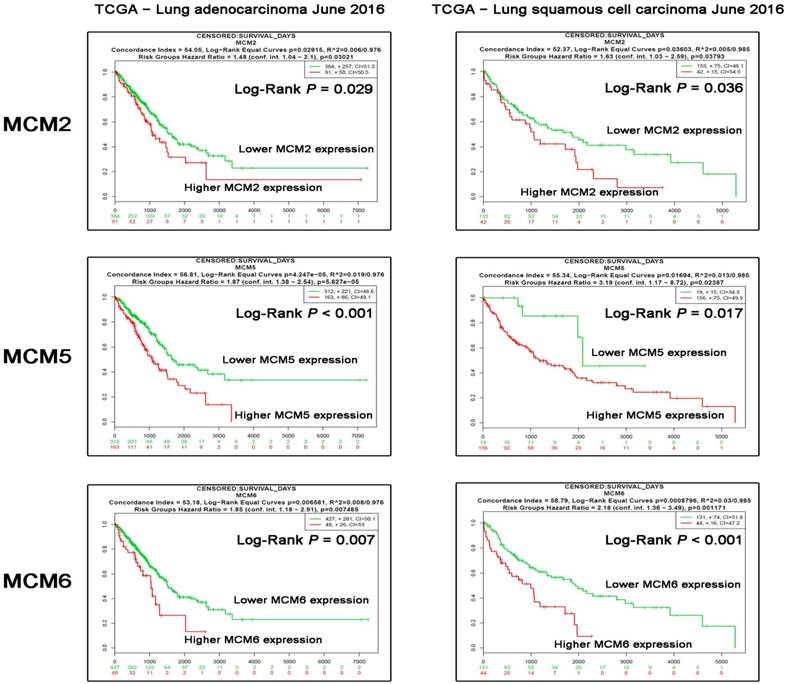 The minichromosome maintenance (or MCM) protein family is composed of six related proteins that are conserved in all eukaryotes. Many experiments indicate that the MCMs are central players in multiple aspects of genome stability, such as regulation of transcription, chromatin remodeling and checkpoint responses [7-9].

MCM proteins can act as biological markers of dysplasia and malignancy [10]. Various studies show that MCM proteins are also prognostic markers for many types of human tumors, including gliomas, prostate cancer, cervical cancer, breast cancer, renal cell carcinoma, colorectal cancer and lung cancer [11-16]. In lung cancer, higher levels of MCM2 were associated with a non-significant increased risk of death [17]. It was also reported to act as a novel therapeutic target of lovastatin treatment in NSCLCs [18]. High MCM3 expression was reported to have association with poor prognosis in medulloblastoma and glioma [16, 19], and showed high expression in carcinomas of colon, cervix, stomach, kidney, breast, but not in lung cancer [20]. MCM4 expression was not associated with survival in non-small cell lung cancer patients [21].

In our current study, MCM2, MCM6 could act as an adverse prognostic biomarker, which was in consistent with previous report [5, 22]. Overexpression of MCM5 protein has been found to be significantly associated with the progression and prognosis of several human cancers, such as breast cancer [23], colorectal cancer, and oral squamous cell carcinoma [24]. MCM5 may predict and diagnose bladder cancer recurrence [25]. Also, MCM5 may serve as a potential therapeutic target for bladder cancer [26]. Here we reported for the first time that MCM5 could act as a potential prognostic biomarker in SCC, which lacks therapeutic approaches in advanced stage.

We previously found that MCM7 was detected significantly higher in SCCs (P = 0.0007), male patients (P = 0.0065), poorly differentiated tumors (P = 0.0120) and current or former smokers (P = 0.0007). The current study showed that MCM2, MCM5 and MCM6 were of significantly high expression in patients with smoking history, male and SCCs. MCM2 and MCM5 were detected more in central-type lung cancer. As we known, squamous cell carcinomas are often centrally located, and male patients were more likely to have smoking history, which may explain our results.

In summary, our data revealed that MCM5 may be an independent prognostic factor in patients with SCC, to which further validation studies are needed.