Clinicopathological Characteristics and Prognosis of Ossifying Fibroma in the Jaws of Children: A Retrospective Study

METHODS: A retrospective study was carried out on patients below the age of 18 years with ossifying fibroma in the jaws. Patients with complete clinical, pathological, and radiological records were included and followed-up.

RESULTS: Sixty-three cases were collected with a preliminary search. After screening, fifty patients were included for general information analysis, of which forty-two patients were included in the recurrence analysis. Twelve patients showed a relapse, with a recurrence rate of 28.6% (12/42). The recurrence rates in cases with different surgical approaches and different X-ray boundaries were statistically different. Besides, twenty-three patients underwent reconstruction by free tissue grafting and the success rate was 96% (22/23).

CONCLUSIONS: There was significant difference in the recurrence rates among different X-ray manifestations and surgical methods. An extended resection and reconstruction with free tissue grafting was a reliable method with a 96% success rate.

A retrospective case series study was conducted. The potentially eligible patients were from the Peking University School and Hospital of Stomatology, China. Patients who were diagnosed with ossifying fibroma and treated in this institution between January 1990 and May 2016 were included in our study with the criteria of younger than 18 years old. The medical records, X-ray films, and pathology specimens were reviewed. Diagnosis was confirmed by senior maxillofacial, radiology and pathology specialists. The gender, age, anatomical site, radiological features, surgical approach, pathology subtypes, and relapsed history after treatment were also collected. Follow-up data was obtained from the outpatient medical records and follow-up calls.

All included cases should have sufficient clinical, radiological, and pathological features that resembled the characteristics of ossifying fibroma. The excluded criteria were the absence of any above information or any case controversies in diagnosis.

To better analyze the characteristics of patients, we divided patients into different groups according to ages, imaging, histology and treatments. And the details of classification foundations were as following:

The margins of the tumors in the X-ray films were grouped as well-defined and poorly-defined [23]. With respect to density, tumors were divided into radiolucent, radiopaque, and a combination of radiolucent and radiopaque [3, 4, 24].

The SPSS software 19.0 was used for statistical analysis. The recurrence rates among the different groups were compared. The chi-square test and Spearman correlation analysis were conducted to compare the prognosis of the different groups. A value of p less than 0.05 was considered statistically significant.

Of the fifty patients, five patients only had biopsy and three patients were lost to follow-up, so the eight patients were excluded. At last, forty-two patients were included for recurrence analysis. The flow diagram of included and excluded cases was shown in Figure 1.

Clinical features of the included patients

There were thirty-four males and sixteen females, giving a sex ratio of 2:1. Ages ranged from one to eighteen years old with a median age of eleven years old. The age distribution of gender difference was showed in Figure 2. Twenty-three cases occurred in the maxilla, twenty-six in the mandible, and one case was a multiple lesion in both jaws. Disease duration ranged from one week to six years. Swelling or an asymptomatic growth of the jaws was the most common chief complaint. Other patients reported nasal congestion, biting discomfort, tinnitus, or slight tenderness. Two were accidentally discovered by a routine X-ray examination. Most of the tumors grew slowly, while two had accelerated growth in the second and sixth month. The number and percentage of each group are shown in Table 1.

A computed tomography scan including spiral CT and cone beam CT was conducted on thirty-seven patients. Thirteen patients had only plain X-ray films in panoramic view or Water's view. Forty-four cases showed a well-demarcated globular mass. The other six cases had poorly defined boundaries. Based on the density of the tumors, nineteen cases were radiolucent, thirteen were radiopaque, whilst eighteen were a combination of radiolucent and radiopaque. Twenty-nine cases had tooth drift, whilst nine cases had slight root absorption.

A flow diagram of included and excluded cases. 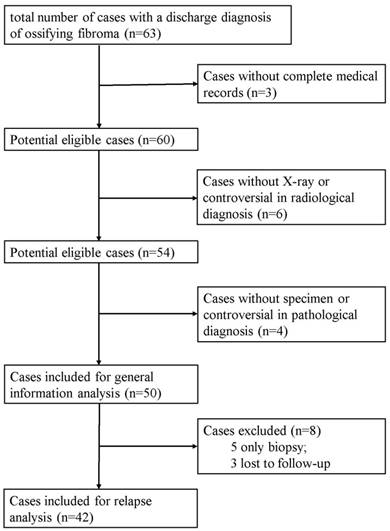 The age distribution in different genders. 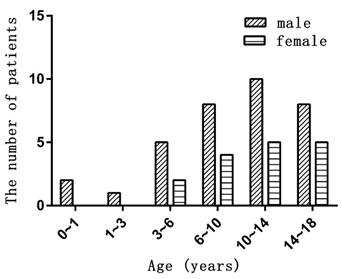 The follow-up period ranged from 3 months to 163 months with the median period of thirty months. Twelve cases were relapsed with a recurrence rate of 28.6% (12/42). The relapse time was between the 3rd and 52nd months after surgery. Seventy-five percent (9/12) of the cases relapsed within one year.

The recurrence rate of lesions with well-defined boundaries was 26.3% (10/38), whilst that of poorly defined boundaries was 50% (2/4). The recurrence rate of curettage was 85.7% (6/7), 55.6% (5/9) for local resection, and 3.8% (1/26) for radical resection. The results showed that the different X-ray boundaries and surgical methods were statistically different among the groups. However, there were no significant differences in the gender, age, position, radiological density and pathological subtype between the groups. The details are shown in Table 2.

In total, twenty-three patients underwent reconstruction with free tissue graft. Sixteen cases were reconstructed with fibula flap graft, four cases with anterolateral thigh flap graft, two cases with iliac flap graft, and one with free rib graft. One anterolateral thigh flap graft of a 6-year-old boy was removed due to vascular crisis. The youngest patients among those with successful reconstruction with different flaps were aged 1 year, 7 years, 10 years, and 13 years. The total success rate was 96% (22/23). For patients, recovering the oral function is important and necessary after operation. In our cases series, both the removable prosthesis and fixed prosthesis (implant) were common methods. Sometimes, the implantation could get absolutely results. In Figure 3, a 17-year-old boy diagnosed of ossifying fibroma underwent segmental resection of mandible. The defect was reconstructed by a fibula flap grafting. Bony union was observed three months after operation. Five years after operation, implantation was applied and a good functional outcome was achieved.

To our knowledge, this study is the largest sample sizes of children to report with the diagnosis of ossifying fibroma.

In this study, ossifying fibroma showed a male predominance, which is consistent with some previous studies [12, 20, 26]. In contrast, most literatures indicated that ossifying fibroma has a predilection for females with ignorance of age [15, 24, 27-29]. The difference may be caused by the onset time. Our result suggested that for ossifying fibroma, onset time in females was a little later than males. This may explain why males were the majority of patients in children, whilst in adults females were more common.

Our results also demonstrate that ossifying fibroma in the jaws of children could be relapse and the recurrence rate is significantly associated with surgical methods and x-ray boundary features, but has no relation with gender, age, jaws, and pathological subtypes.

Comparing with many previously published reports, the total recurrence rate of ossifying fibroma in the jaws is higher in this report [2-4, 18, 20, 27]. Differences of recurrence rates among different studies may be caused by many reasons. First of all, patient ages were different in different studies. The object of our study was patients below 18 years, but adults were included in many other reports [2-4, 18, 27], which also demonstrate that ossifying fibroma is more prone to children than adults. Besides, the inclusion criteria were different. In this study, cases with clinical, radiological, and pathological features that resembled the characteristics of ossifying fibroma were included, but in some reports, the inclusion criterion was with histopathological diagnosis of ossifying fibroma. It's not appropriate because diagnosis of ossifying fibroma should be a combination of clinical, radiological and pathological features. Moreover, the definitions of surgical strategies were not consistent. Many terms of surgery have been mentioned, such as enucleation, curettage, resection, local surgical excision, radical resection. Classification methods were different, and one term may have different meanings in different studies. For example, curettage in the study by Fadi et al. [3] was defined as excision from the surrounding normal bone, the areas underwent curettage were wider than those in our study. Lastly, preferences of surgeon may influence the choice of surgical approach. In only a few reports the cases were operated by one surgeon. Most of the reports the surgeons were not mentioned and may not the same one. For different surgeon the main consideration may be different. For example, main consideration for radical resection could be the border of the lesion [4], cortical perforation [30], enlargement rate, or size of the lesion [18]. Surgeon may tend to be conservative, considering the growth and development of the children.

Like many other tumors, there are many possible causes of tumor recurrence, such as a residue of the tumor tissue, the aggressive nature of the tumor, growth and development potential of children, treatment etc. Of course, the residue of the tumor tissue is the most common reasons and easily caused by the curettage. In some cases, the locations of the anatomic structures of the ossifying fibroma are complex, making it difficult to remove all the tumor tissue. Therefore, some surgeons might consider protecting important anatomic structures or saving function, resulting in some residues in these structures. A locally aggressive growth pattern may present as a poorly defined border on radiographs, so lesions with pool-defined boundary are easy to recur [23]. These findings indicated that radical resection could be used to avoid relapse. After radical surgery, reconstruction can be applied. Free flap grafting has gradually been shown to improve the growth of the issues in children [31-35].

In conclusion, ossifying fibroma showed a male predominance in patients below the age of 18 years. Recurrence rates were significantly associated with X-ray boundaries and surgical methods, but showed no relation with gender, age, jaws, and pathological subtypes in this study. Curettage had the highest relapse risk, whereas radical excision was the best strategy to avoid relapse. Extended resection and reconstruction with free tissue flap was a reliable method.