Background: Ovarian carcinoma is a highly lethal gynecological malignancy due to its frequent relapses and adoption of chemoresistance. To develop new biomarkers for disease progression in ovarian carcinoma, CSCs, which are considered to contribute to disease relapse and metastasis, were isolated from human ovarian carcinoma tissues, and differentially expressed microRNAs (miRNAs) in CSCs were identified and assessed the clinical implication of expression of these miRNAs.

Methods: Primary cancer cells derived from human ovarian carcinomas were cultured and spheroid-forming cells (SFCs) were isolated. Profiles of miRNA expression in CSC-like SFCs were identified by miRNA microarray and the results were validated by quantitative real-time RT-PCR (qRT-PCR). We also assessed the correlations between miRNA expression levels and clinicopathological parameters in ovarian carcinomas.

Ovarian carcinoma is the most lethal gynecological malignancy in women [1]. Its high mortality rate is due to difficulties in early detection and disease recurrence. Despite the good response to first-line chemotherapies such as taxol and platinum-based combination therapy, the majority of patients with advanced disease become refractory to conventional chemotherapeutic agents [2], resulting in disease recurrence and distant metastasis. However, the mechanisms involved in disease recurrence and distant metastasis remain unclear.

Increasing evidence indicates that cancer stem cells (CSCs) comprise a small population of cells within a heterogeneous tumor mass. They are the most tumorigenic and resistant to chemotherapy [3-7]. CSCs express distinct surface markers and contribute to heterogeneous tumor growth. Thus, they resemble the functional hallmarks of genuine stem cells; namely, the ability to self-renew, modulate and balance the differentiation of various cell types [8-12]. In addition, CSCs can survive from conventional treatments and contribute to disease recurrence, resulting in more chemoresistant and aggressive tumors [13]. However, the molecular mechanisms that regulate CSCs are poorly understood.

Recent discoveries in the biology of microRNAs (miRNAs) have provided new insights on the genes implicated in tumorigenesis and CSC modulation [14]. miRNAs are small non-coding RNAs that inhibit the expression of multiple genes at the post-transcriptional level via partial base pairing to the 3′untranslated region (UTR) of their targets. miRNAs regulate various cellular processes, including the cell cycle [15] and apoptosis [16]. Furthermore, aberrant miRNA expression promotes tumorigenesis and metastasis of various human cancers, including ovarian carcinoma [17, 18]. Gene expression studies have identified hundreds of dysregulated miRNAs in cancer cells, and their control of oncogenes and tumor suppressors has been demonstrated by functional studies [19]. Thus, understanding the miRNA expression levels and their clinical significance may provide insight into the pathobiology of ovarian carcinoma on a molecular level and reveal new prognostic biomarkers and therapeutic targets.

To quantify the miRNA expression levels by real-time PCR, fresh and formalin-fixed-paraffin-embedded (FFPE) tissues from 59 high-grade OSCs were obtained from patients who underwent an oophorectomy at the Bundang CHA Medical Center. The fallopian tubes from patients who underwent a hysterectomy with salpingectomy due to benign leiomyoma served as a control. The histological diagnosis and clinical stage were determined using the World Health Organization classification system. The samples were histopathologically graded by a pathologist at the Department of Pathology according to a two-tiered grading system and tumor staging was carried out according to a tumor-node-metastasis staging system. Each sample was assigned to either the chemosensitive or chemoresistant group according to the responsiveness of patients to first-line chemotherapy (taxol and platinum-based combination therapy) after surgery based on the NCCN guidelines. This study was approved by the Ethics Committee of the Bundang CHA Medical Center. Informed consent was obtained from each patient before surgery.

Procedures were performed as described by Kwon et al. [21]. To isolate and characterize CSCs, high-grade OSC cells isolated from the ovary of 4 patients who underwent oophorectomy were primarily cultured and a spheroid formation assay was performed using cultured primary ovarian carcinoma cells.

The miRNA expression profiles of four independent primary OSC cell cultures and their corresponding SFC cultures were compared using the Agilent Human miRNA 8 × 60K platform (Agilent, Inc., Santa Clara, CA, USA) based on the miRBase software package (v18.0). miRNA microarray analysis was performed as instructed by the manufacturer. In brief, 100 ng of total RNA per sample was labeled with cyanine 3-pCp (Cy3) using the miRNA Complete Labeling and Hyb kit (Agilent, Inc.). Cy3-labeled RNAs were hybridized to a miRNA microarray containing 1887 human miRNAs. The miRNA microarray was then scanned using the Agilent G2600D microarray scanner. Raw data for the same gene in primary OSCs and SFCs were summarized in the Agilent Feature Extraction software package (v11.0.1.1), which generated the gene view file and provided expression data for each gene probed on the array. Array data were filtered using gIsGeneDetected = 1 for all samples (1: detected). Logarithmically-transformed miRNA gtotalGeneSignal values were normalized using the quantile method. The comparative analysis of results from primary cancer cells and SFCs was based on -fold changes. All data analysis and visualization of differentially expressed genes were conducted using the R statistical language software package (v. 2.15.0).

To identify relevant target genes, severely dysregulated miRNAs showing ≥ 2.0 fold change or < 0.5 fold with a P-value < 0.05 based on microarray data were included in the analysis. Identification of miRNA target genes was performed using Target Scan 7.1(http://www.targetscan.org) and miRDB (http://mirdb.org/miRDB/, v4.0). The list of target genes was further reduced by selecting those genes targeted by five or more miRNAs.

Bioinformatics analysis for gene set enrichment was performed using the DAVID database (DAVID Functional Annotation Bioinformatics Microarray Analysis, http://david.abcc.ncifcrf.gov/) [22] and KEGG database. The KEGG pathways were regarded to be significant when the adjusted P-value by Benjamini-Hochberg procedure was less than 0.05. 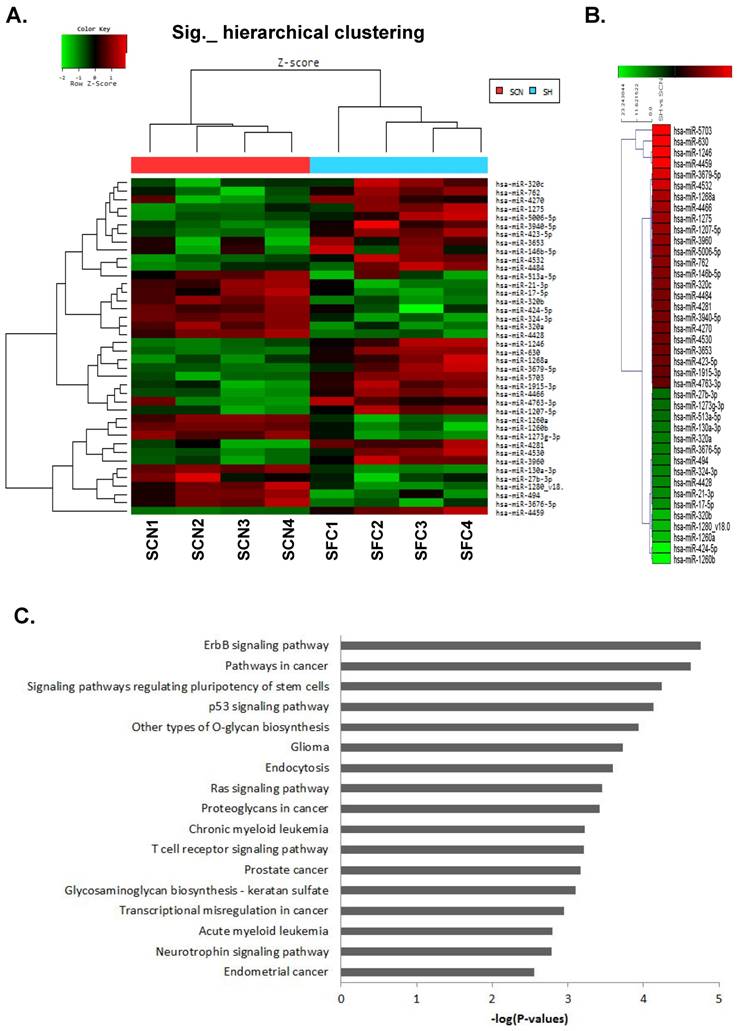 The miRNA expression profiles of CSC-like SFCs and their corresponding primary cancer cells were examined by miRNA microarray analysis (Fig. 1A).

Of 37 miRNAs, we chose five miRNAs whose levels were the most increased (miR-5703, miR-630 and miR-1246) and the most decreased (miR-320b and miR-424-5p) for further validation with human OSC samples. To further explore the functional distribution of these five miRNAs, we performed genome-wide miRNA target prediction databases. The major target genes of each miRNA involved in oncogenesis are summarized in Table 3.

Correlations between miRNA expression levels and clinicopathological parameters, including clinical stage, nodal and distant metastasis, chemoresistance, and disease recurrence were identified only for the high stage OSCs (n=49), because other clinicopathological parameters are related with clinical stage. Decreased expression of miR-424-5p (<0.1-fold) was significantly associated with distant metastasis (35.5% vs. 72.2%, respectively, p=0.013) (Table 4). However, there was no correlation between the aberrant expression of other miRNAs and clinical stage, nodal metastasis, or disease recurrence.

The putative target genes of the most highly dysregulated miRNAs in spheroid- forming cells compared with primary cancer cells. 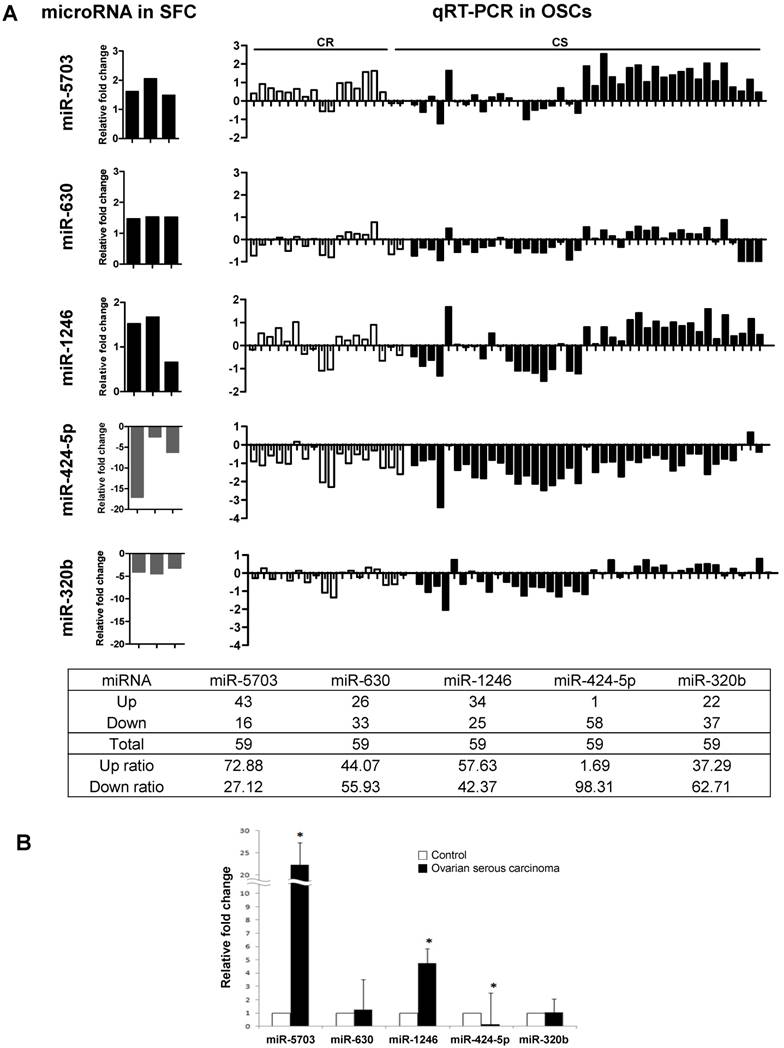 In spite of relatively small population (0.01-1.0%) of CSCs, CSCs contribute disease recurrence because these cells are resistant to conventional treatments that target rapidly dividing cells, such as chemotherapy and radiotherapy [13, 26]. Therefore, identifying CSCs and characterizing their molecular phenotype may provide insight into new therapeutic strategies for lethal human cancers such as ovarian carcinoma. From this point of view, ovarian CSCs are considered to be involved in disease relapse [5] as well as cancer development and chemoresistance; thus, CSC-specific molecular changes may be disease biomarkers or novel therapeutic targets [12].

A growing body of evidence indicates that miRNAs regulate most human genes involved in critical biological processes, including tumorigenesis, progression, and therapy resistance. miRNAs also control CSC self-renewal and differentiation, according to several studies that reported differentially expressed miRNAs in CSCs of various human cancers [22, 27, 28]. Recently, the dysregulation of miR-200a, miR-199a and miR-214 was reported in CD133 (+) and CD44 (+) ovarian CSCs [29]. We previously demonstrated that miR-23b, miR-27b, miR-424, and miR-503 expression is dysregulated in ovarian cancer cells positive for ALDH1 [30], a biomarker of CSCs. However, there are few data regarding miRNA expression profiles in ovarian CSCs.

To identify predictive biomarkers for disease recurrence and poor prognosis, and to provide new treatment strategies for life-threatening ovarian carcinoma, we identified ovarian CSC-specific miRNAs using high-throughput miRNA microarray and qRT-PCR. We also assessed the clinical implications of CSC-specific miRNAs by evaluating correlations between differentially expressed miRNAs and clinicopathological parameters. We found that miR-5703, miR-630, miR-1246, miR-424-5p, and miR-320b were aberrantly expressed in CSC-like SFCs. We also demonstrated that miR-5703 and miR-1246 expression increased, and that miR-424-5p expression decreased, significantly in OSCs compared with the control, indicating that these miRNAs are involved in the development of OSCs. We then analyzed correlations between miRNA expression levels and various clinicopathologic parameters to identify putative prognostic biomarkers as for the high stage OSCs (Table 4). Regarding that resistance to chemotherapy is due mainly to CSCs, and that miRNAs are responsible for the maintenance and regulation of CSCs properties and drug resistance by several recent studies [31], we postulated that chemoresistance is associated with changes in miR-5703, miR-1246 and miR-424-5p expression. However, we could not find evidence to support this postulation in our analysis. Thus, further studies are required to understand the roles of these miRNAs in human ovarian carcinoma.

As for miR-5703, which was upregulated in OSCs, its roles in tumor development and progression remain unclear. To predict the roles of miR-5703 in tumor development and progression, we searched for predicted target genes associated with apoptosis and tumor suppression using the web-based computational programs PicTar and Target Scan. ADAM19, a putative miR-5703 target gene, is a member of the Notch pathway. Its dysregulation results in neoplastic proliferation and stem cell regulation in many human cancers [36, 37]. The cleavage of the Notch transmembrane domain by ADAM proteases, which are multi-functional, multi-domain proteins involved in cell adhesion, cell signaling, and the proteolytic processing of other transmembrane proteins results in activation of the Notch pathway [38, 39]. Recent studies show that several ADAMs are highly expressed in cancer cells and tissues [40]. Of these, ADAM19 is highly expressed in human primary brain tumors and its upregulation is associated with increased invasiveness [41]. However, the function of ADAM19 in other cancers remain unclear. Therefore, further studies are necessary to determine whether miR-5703 induces ovarian cancer cell growth or migration/invasion, and whether ADAM19 is a direct target gene of miR-5703.

MiR-1246 was reported to promote migration and invasion of hepatocellular carcinoma [42]. Another study demonstrated that miR-1246, a putative target of the p53 transcription factor, inhibits Down syndrome-associated DYRK1A, thereby activating NFAT and leading to tumorigenesis [43]. Serum miR-1246 was reportedly a novel diagnostic and prognostic biomarker of esophageal squamous cell carcinoma [44]. The further study is needed to investigate the role of miR-1246 in this subset of ovarian cancer.

In summary, we found that miR-5703, miR-630, miR-1246, miR-424-5p, and miR-320b were dysregulated in CSC-like cells of OSC. Of these, decreased expression of miR-424-5p was associated with distant metastasis of OSCs. Our results indicate that these microRNAs are putative CSC markers, and that miR-424-5p is a potential predictive biomarker for poor prognosis and a possible therapeutic target in OSC.

This research was supported by a grant of the Korea Health Technology R&D Project through the Korea Health Industry Development Institute (KHIDI), funded by the Ministry of Health &Welfare, Republic of Korea (grant number: HI16C1559).