Objective: To evaluate the prognostic significance of clinicopathological features in a large series of Chinese patients with chromophobe renal cell carcinoma (RCC).

Materials and Methods: Patients with chromophobe RCC who were treated surgically for renal masses at Chinese PLA General Hospital from 2006 to 2015 were identified. Tissue slides were reviewed to verify diagnoses and collect clinicopathological variables. Cox proportional hazard regression models and the Kaplan-Meier method were performed to evaluate the significance of clinicopathological variables on survival outcomes.

Results: A total of 209 patients with chromophobe RCC were enrolled in this study. There were only 13 cancer-specific events, which included 7 local recurrences and 6 metastases. The estimated 5-year and 10-year disease-free survival (DFS) rates were 92.4% and 83.1%, respectively. Univariate analysis indicated that tumor size, 2010 AJCC TNM stage, grade, sarcomatoid differentiation and urinary collecting system invasion were correlated with poor DFS. Multivariate analysis revealed that tumor size, 2010 AJCC TNM stage and grade were independent predictors of DFS.

Worldwide, renal cell carcinoma (RCC) is one of the most common malignancies of the urogenital system. The incidence of RCC has steadily increased over the years [1, 2]. Clear cell, papillary, and chromophobe RCC are the three main histological subtypes. Chromophobe renal cell carcinoma (chRCC) composes approximately 5% of all cases of RCC [3]. First described in 1985, chRCC was characterized by large pale cells with reticulated cytoplasm, a prominent cell membrane, and a diffuse cytoplasmic Hale's iron colloid stain [4].

For many years, chRCC did not attract much attention compared to other subtypes of RCC. Little attention from urologists was attributed to the low incidence of chRCC. Although in absolute numbers, there are still thousands of patients with chRCC globally. Patients with chRCC have a better prognosis relative to clear cell RCC, and they have slightly favorable or similar survival compared with papillary RCC [5, 6]. However, some patients with chRCC die of metastatic disease, and predictors of survival outcome in patients with chRCC have varied widely in previous studies [7, 8]. So it is important to identify prognostic factors that can be useful in precisely guiding clinical decisions and accurately aiding counseling for patients with chRCC. However, identifying prognostic features for chRCC is quite complicated considering its lower incidence compared to clear cell RCC and its small proportion of patients with recurrence, metastasis or death [7]. Thus, additional studies with large numbers of patients and a long-term clinical follow-up are needed to further evaluate the prognostic value of clinicopathological variables in chRCC.

We investigated 209 consecutive patients with chRCC at our institution, all of whom had adequate follow-up, to determine the prognostic value of various clinical and pathological features. Our objective was to define the long-term clinical course and determine the features correlated with aggressive phenotype and to provide clinicians with prognostic information for Chinese patients with chRCC.

The Institutional Review Board of the Chinese People's Liberation Army General Hospital reviewed and approved the study. We reviewed our prospectively maintained database and identified the records of 5714 consecutive patients who underwent radical or partial nephrectomy for a renal mass from January 2006 to December 2015 at our institution. Only patients with pathologically confirmed chRCC who did not have any missing information were included in this study (n = 209).

All pathological tissue slides were reviewed by two urological pathologists at our institution to evaluate histological features. Both pathologists were blinded to the clinical outcome of individual patients. Histological features studied included grade, coagulative tumor necrosis and sarcomatoid differentiation. Grade was assigned to each case according to a novel 3-tier tumor grading system that was proposed by Paner et al. in 2010 [8]. chRCC with wide constitutive nuclear range but without nuclear crowding and anaplasia was classified as grade 1. chRCC with geographic nuclear crowding and the presence of nuclear pleomorphism was classified as grade 2. chRCC with presence of frank anaplasia or sarcomatoid change was classified as grade 3.

According to our institution's outpatient procedure, all patients were offered standardized postsurgical care. For the first two years after surgery, physical examinations, laboratory tests, abdominal ultrasonography, and computed tomography were performed every 3 or 6 months and annually thereafter. Disease and vital status were updated regularly by clinical follow-up or telephone interview. The primary endpoint was disease-free survival (DFS). DFS was defined as the interval from surgery to local recurrence or distant metastasis of chRCC. Follow-up was calculated from the date of surgery to the date of local recurrence, distant metastasis, or last known follow-up.

Continuous variables with a non-normal distribution were summarized as the median and range, and those with a normal distribution were summarized with the mean and standard deviation (SD); categorical variables were summarized with frequency and percentages. DFS was estimated using the Kaplan-Meier method with the log-rank test. Associations of clinicopathological variables with DFS from chRCC were assessed using Cox proportional hazard regression models and summarized with hazard ratio (HR) and 95% confidence intervals (CI). All statistical analyses were conducted using SPSS version 20.0 (IBM Corporation, Armonk, NY, USA). Statistical significance was set at a two-sided P <0.05.

A total of 209 patients with pathologically confirmed chRCC were analyzed. The clinical and pathological features of patients are shown in Table 1. The mean (± standard deviation) age at surgery for the study patients was 47.7±12.0 years. The male-to-female ratio was 0.85 to 1. The mean (± standard deviation) pathological tumor diameter was 5.3±3.6 cm. Approximately two-fifths of the patients underwent partial nephrectomy (n = 83, 40%), and three-fifths underwent radical nephrectomy (n = 126, 60%). Partial nephrectomy accounted for an increasing proportion of all chRCC resections over time; there were 7 of 41 (17%) cases from 2006 to 2009, 24 of 69 (35%) cases from 2010 to 2012, and 52 of 99 (53%) cases from 2013 to 2015. At our institution, most patients with chRCC underwent minimally invasive surgery (laparoscopic or robotic surgery, 95%), had no symptoms at presentation (71%), had 2010 AJCC TNM stage I disease (73%) and were classified as grade 1 (68%). Other clinicopathological features including coagulative tumor necrosis (8%), sarcomatoid differentiation (6%), tumor thrombus (1%), microvascular invasion (5%), perirenal fat invasion (6%), sinus fat invasion (6%), and urinary collecting system invasion (6%) were infrequent in chRCC patients.

Overall, there were 13 cancer-specific events, with 7 local recurrences and 6 metastases (Table 1). 4 patients with metastases died of chRCC. Sites of metastasis included lymph nodes (3 patients), lung (2 patients), liver (2 patients), brain (1 patient), and bone (1 patient). The median follow-up time for patients without any event was 48.4 (range 10.7 to 129.9) months. The estimated 5-year and 10-year DFS rates were 92.4% with 74 patients still at risk and 83.1% with 12 patients still at risk, respectively.

Clinical and pathological features of 209 patients 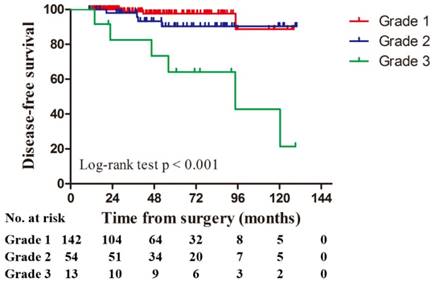 Despite multiple studies of chromophobe renal cell carcinoma (RCC), many clinical and pathological issues remain controversial. chRCC has long been recognized as a distinct subtype of RCC in humans, and it composes 1.6% to 6.5% of all RCCs [9]. Recently, some studies suggested that patients with chRCC have significantly better survival than those with clear cell RCC, but the prognostic features of chRCC are not well defined [10, 11]. Studies evaluating prognostic factors for chRCC have been limited by the infrequency of cancer-specific events and the small sample size of most of the series published. Moreover, many of the previous studies of chRCC included Fuhrman grade in their analysis. However, it has been suggested that Fuhrman grade may be not appropriate for chRCC, as its inherent nuclear atypia is essentially Fuhrman grade 3 by definition [12]. Paner et al. [8] recently presented a new 3-tier tumor grading system that downplays the expected nuclear atypia of chRCC to address this controversial grading issue. We assessed the features in a large number of chRCC patients, including the new grading system, to identify prognostic features using DFS as the end point. The present study includes 209 chRCC patients with a long-term clinical follow-up and embraces, to our knowledge, the largest sample of Chinese patients with chRCC to date.

Our study suggests that chRCC has a relatively low risk of aggressive clinical behavior, which is consistent with the findings of previous studies. Over a median follow-up of greater than 4 years for the entire cohort, only 13 (6%) patients developed local recurrences or metastases. Recently, Weinzierl et al. [9] performed a retrospective analysis of 73 patients with chRCC and found a similarly low cancer-specific event rate (4%). This low rate of cancer-specific events is also described in several previous reports [7, 10]. In our cohort, the estimated 5-year and 10-year DFS rates were 92.4% and 83.1%, respectively. They are much higher than those for clear cell RCC [6] (5-year survival 43% to 76% and 10-year survival 44% to 70%, respectively), which is the most common subtype of RCC. This finding has been independently confirmed by previous studies. In one of the largest studies to date, Volpe et al. [13] reviewed 5,463 patients with RCC at 16 Italian academic Center, including 291 cases of chRCC, and reported similar conclusions that patients with chRCC have a low risk of tumour progression, metastasis, and cancer-specific death when compared with clear cell RCC. Similarly, this difference in survival has also been reported by several other studies [11, 14, 15].

In subsequent analysis, we found that tumor size, 2010 AJCC TNM stage, grade, sarcomatoid differentiation, and urinary collecting system invasion were univariately associated with poor DFS. Tumor size, 2010 AJCC TNM stage, and grade were independent predictors of DFS after adjusting for other variables in the multivariate analysis. Sarcomatoid differentiation in any subtype of RCC is seen as a predictor of aggressive clinical behavior. Indeed, Volpe et al. [13] confirmed that sarcomatoid differentiation was an independent prognostic indicator in patients with chRCC. Sarcomatoid differentiation was not included in our multivariable model due to its colinearity with chromophobe tumor grade. In our series, we found no significant difference in DFS between grade 1 and grade 2, but there was a significant difference between a combined grade 1/2 group and grade 3. In this study, grade 3 chromophobe tumors are almost characterized by sarcomatoid differentiation. Therefore, it is not surprising that grade 3 is associated with poor survival. We found that tumor size could independently influence survival. Every 1-cm increase in tumor size was correlated with a 15% increased risk of DFS. This was inconsistent with certain previous studies [6, 8]. This difference may be attributed to small sample size in these studies compared to our work. This study also suggests that tumor stage is independently associated with survival in patients with chRCC, which is consistently prognostic in cases of RCC [10]. Several studies have evaluated the prognostic significance of urinary collecting system invasion and have identified it as an independent predictor of survival in patients with RCC, but most focused mainly on clear cell RCC. The prognostic value of urinary collecting system invasion in chRCC is unknown. In our study, univariable analysis showed that urinary collecting system invasion was associated with worse DFS for patients with chRCC, but multivariable analysis did not show it to be an independent marker of DFS. This difference may be due to the different histological types of RCC, which can exhibit different pathogenesis and genetic alterations and lead to different survival outcomes.

This study evaluated the prognostic value of clinical and pathological features among patients with chRCC at our institution, but several limitations should be noted. First, the study was a retrospective analysis of a database from a single institution, and therefore our results are subject to the inherent biases that accommodate such observations. Second, the infrequency of cancer-specific events may decrease the power and validity of a survival analysis. Because our series was composed of consecutive patients treated surgically for chRCC at a single tertiary referral institution, this paucity may indeed reflect the expected distribution of adverse events associated with chRCC. Even the study with the largest sample of chRCC patients to date, which contained 291 cases, included only 25 adverse events [13]. Based on these limitations, more multicenter prospective studies with standardized methods and extremely long follow-up are warranted to verify our results.

In conclusion, we performed a clinicopathologic analysis of a large number of Chinese patients with chRCC at a single institution with a long clinical follow-up. Our findings support that chRCC is associated with a very low rate of cancer-specific events (6.2%) and has better survival than clear cell RCC. Our findings suggest that tumor size, 2010 AJCC TNM stage and grade were the only independent prognostic factors in Chinese patients with chromophobe RCC. More attention should be paid to patients with these features, and appropriate follow-up schedules must be made to improve their survival.