Background and Objectives: Previous studies of the prognostic value of the signet ring cell (SRC) type have yielded inconsistent results. Therefore, the aim of the present meta-analysis is to explore the clinicopathological characteristics and prognostic value of SRCs.

Methods: Relevant articles that compared SRC and non-SRC type in PubMed and Web of Science were comprehensively searched. Then, a meta-analysis was performed.

The incidence of gastric cancer has decreased over the last 50 years. Meanwhile, differential trends have also occurred, such as an increase in the diffuse type, particularly signet ring cell (SRC). Henson et al. reported that SRC has increased on average 6.5% per year from 1973 to 2000 in the United States [3]. SRC is a histological subtype of carcinoma with cells containing large amounts of intracytoplasmic mucins [4].

According to the WHO criteria, SRC was defined by an adenocarcinoma with more than 50% of the tumor consisting of isolated or small groups of malignant cells containing intracytoplasmic mucins [4]. Studies were included if they compared SRC and non-SRC directly with more than 50 patients involved in the studies. Studies were excluded if they were basic studies about animals or cells, review articles, meta-analyses, abstracts, case reports, case series, letters, conference proceedings or non-English published articles. Studies were also excluded if they did not conform to or mention the WHO criteria. If multiple reports described the same population, the most recent or complete research was included.

The estimated odds ratio (OR) or weighted mean difference (WMD) was used to summarize the association between SRC pathological type and different clinicopathological characteristics. The hazard ratio (HR) was pooled to analyze the OS results as demonstrated by Parmar et al. [16]. All results were reported with 95% confidence intervals (CIs). Heterogeneity was assessed using the χ² test and quantified using the I2 statistic, with the level of significance set at 10%.

Based on the inclusion and exclusion criteria, a total of 20 studies [6-15, 19-28] including 35947 cases were included in the final analysis (Fig. 1). The characteristics of the included studies are shown in Table 1. These studies were primarily from six countries (Japan, Korea, China, France, America, and Belgium) and were published from 1992 to 2017. The proportion of SRC ranged from 3.4% to 50.0% in the included studies.

Flow diagram of the included studies. 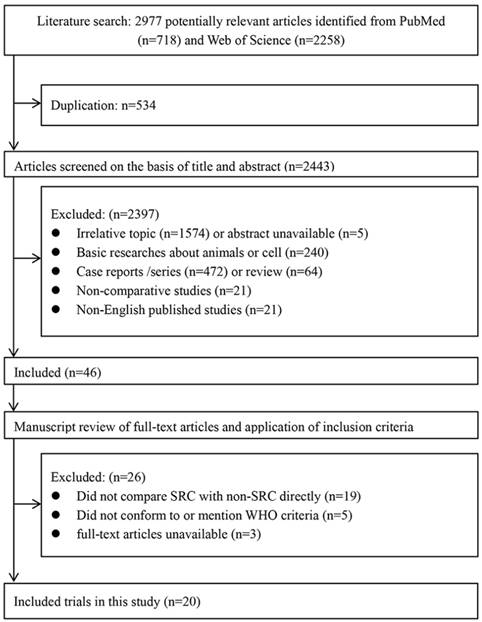 a, HR was only available for early stage;

b, HR for resected patients; 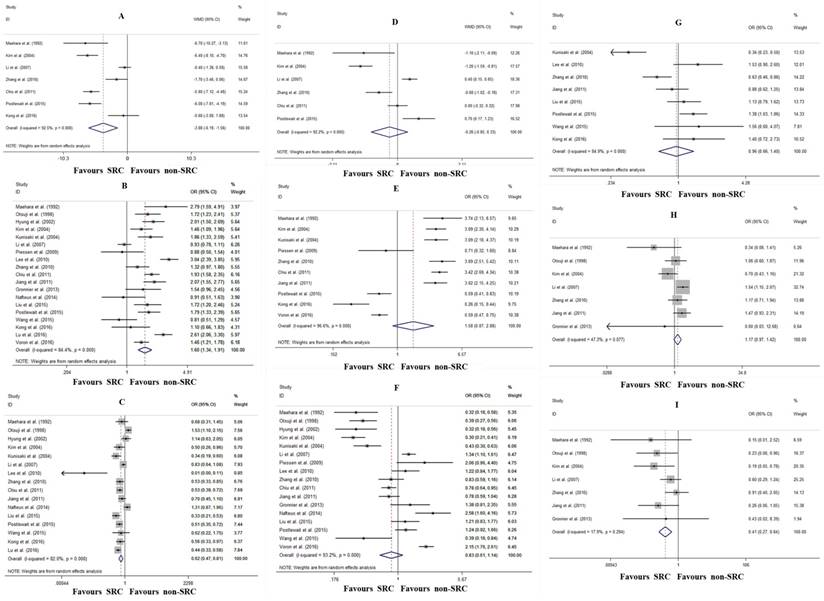 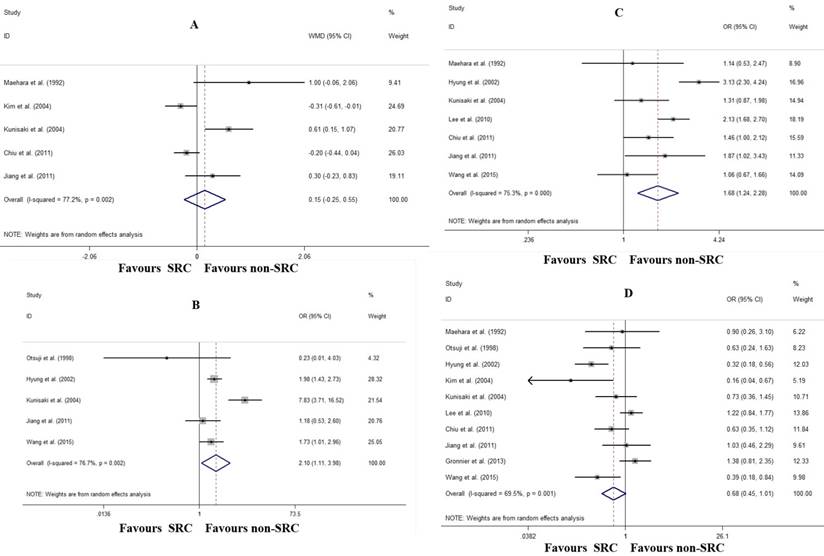 Our results showed that SRC tended to affect younger female patients, and SRC tended to be located in the middle and lower third of the stomach. The association between sex and SRC may be due to sex hormones. It has been reported that levels of the estrogen receptor were higher in young women and in patients with poorly differentiated gastric cancer [33].

Early gastric cancer is defined as a lesion confined to the mucosa or submucosa, regardless of the status of lymph node metastasis [34]. The prognostic value of SRC in early gastric cancer is debatable. Wang et al. reported that early gastric cancer with SRC was associated with a lower incidence of lymph node involvement and a longer 5-year survival (93.9% vs. 85.8%, P=0.027) [15], in accordance with several studies [13, 14, 22, 24, 25, 27]. However, other studies showed that there was no difference in survival between SRC and non-SRC patients [7, 10, 26]. The present meta-analysis revealed that SRC is a better prognostic factor for early gastric cancer (HR: 0.57, P=0.002), which is characterized by a higher proportion of the depressed gross type (OR: 2.11, P=0.022), more mucosal invasion (OR: 1.68, P=0.001), and marginally less lymph node metastasis (OR: 0.68, P=0.054). A higher percentage of the depressed type and the distinct feature of enriched intracytoplasmic mucins with the nucleus compressed peripherally may lead to early detection of the tumor by gastroscopy and biopsy [20]. Endoscopic mucosal resection (EMR) and endoscopic submucosal dissection (ESD) have been associated with excellent prognoses [35, 36]. EMR and ESD are recommended for early-stage gastric cancer lesions smaller than 2 cm in diameter without relevant ulcer formation [37]. Therefore, considering the lower incidence of lymph node metastasis and better prognosis, less invasive gastric surgery, such as EMR, ESD, or gastrectomy with D1 lymphadenectomy, is highly recommended for patients with early SRC. 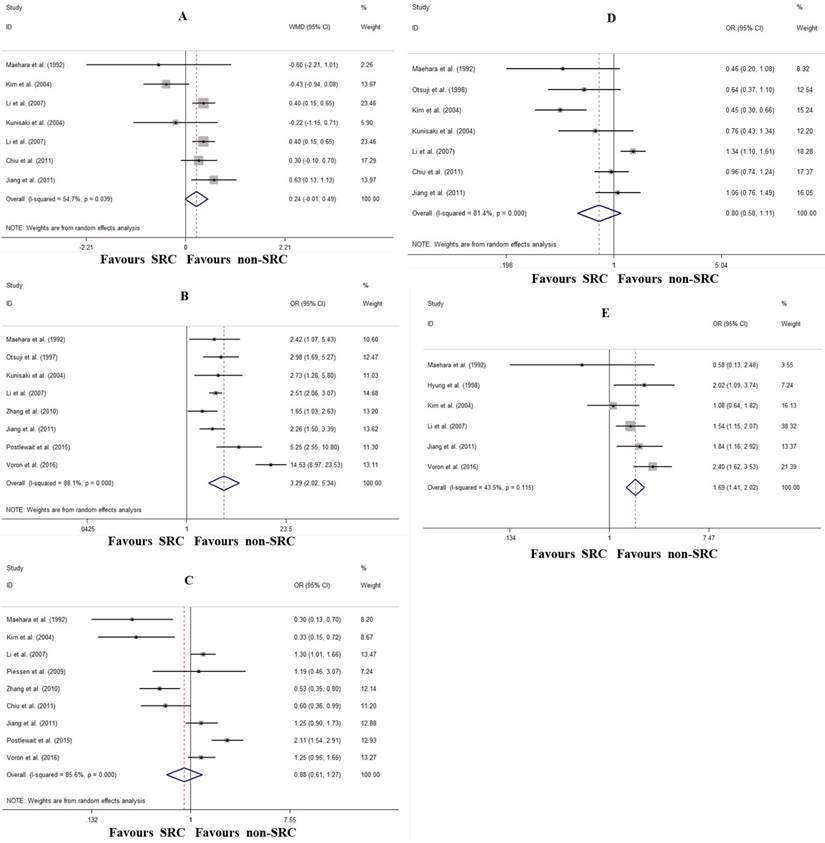 Funnel plot to assess publication bias of overall survival in the meta-analysis. 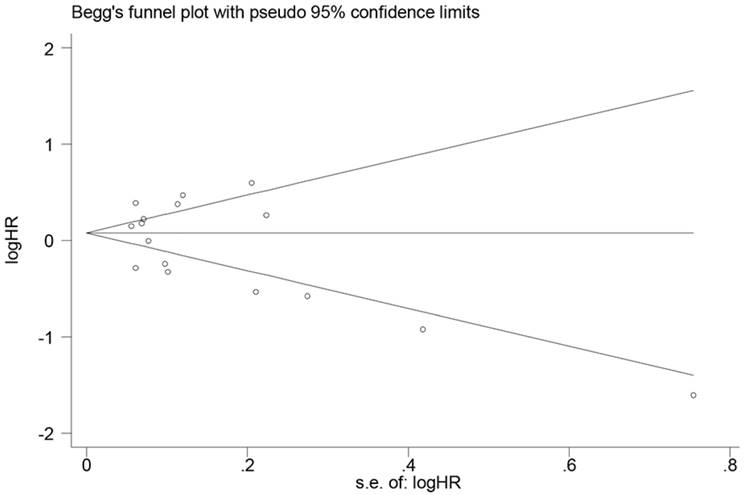 The underlying cause for the opposite prognoses for patients with early and advanced gastric cancer with SRC remains uncertain. One explanation is that early SRC is associated with a low aggressive state because of a CDH1 mutation [38]. When SRC has invaded the muscularis propria, it will accelerate tumor invasion, increase the risk of lymph node metastasis and peritoneal seeding, and worsen the chemosensitivity and prognosis [27].

There are some limitations in the present meta-analysis that must be considered. First, the main limitation is that all the included studies were retrospective studies from different countries, with the proportion of SRC ranging from 3.4% to 50.0%. Second, there is significant between-study heterogeneity in our meta-analysis. However, we included the studies strictly according to the WHO criteria for SRC, and we used a random-effects model to address heterogeneity appropriately.

This meta-analysis indicated that SRC tends to affect young females and tends to be located in the middle and lower third of the stomach. Early SRC patients have better prognoses than non-SRC patients, while advanced SRC patients exhibited the worse prognoses.