Breast cancer is the most frequently diagnosed cancer and the leading cause of cancer death among females worldwide, with an estimated 1.67 million new cases and 521,900 deaths in 2012. In developing countries, breast cancer incidence and mortality are rising, which have exceeded developed countries [1]. Metastasis is considered as a lethal step in the progression of breast cancer. Several risk factors have been identified to be related to breast cancer metastasis, such as tumor size, nodal status, histological grade, vascular invasion, etc. In addition, the expression of estrogen receptor (ER) and progesterone receptor (PR) and the amplification of HER2/c-erbB2 are closely linked with breast cancer metastasis, which provides the guidance to the adjuvant therapy for breast cancer [2]. Other molecules, such as miR-185-5p [3], cadherin-5 [4], Ku86 [5], and transforming growth factor β (TGF-β), are also associated with breast cancer metastasis. In addition, epithelial-to-mesenchymal transition (EMT) [6-8], circulating tumor cells [9], and the tumor microenvironment [10, 11] also contribute to the metastatic spread of breast cancer. While how these molecules and/or processes contribute to breast cancer metastasis is still not clearly understood, none of these has a definite prognostic value as a biomarker in breast cancer patients.

In recent years, innovations in high-throughput proteomic profiling approaches have allowed for highly sensitive, accurate, and quantitative identification of altered proteins in multiple samples at the same time. Isobaric tags for relative and absolute quantitation (iTRAQ) has been used successfully for the characterization of protein bioindicators of diverse effects [12]. Our goal in this study is to explore the differentially expressed proteins in matched primary breast tumor and metastatic lymph node tissue samples by the iTRAQ technique coupled with LC-MS/MS, aiming to identify reliable biomarkers for the prediction of breast cancer metastasis and prognosis.

A total of 23 paired female fresh primary breast tumor and metastatic lymph node tissues were collected and used for iTRAQ followed by LC-MS/MS. All of these patients were diagnosed as breast cancer and received surgeries without any pre-operative chemotherapy or radiotherapy in Hunan Cancer Hospital & The Affiliated Cancer Hospital of Xiangya School of Medicine of Center South University from January to May, 2014. Histological type was confirmed by two pathologists in the Department of Pathology of Hunan Cancer Hospital. Each tissue sample was divided into two parts, one part used for routine pathological examination and the other stored in liquid nitrogen for iTRAQ analysis.

In addition, 106 paraffin-embedded tissue samples for immunohistochemistry were obtained from female patients with metastatic breast cancer who had received surgeries in Hunan Cancer Hospital between 1996 and 2008. These were paired primary breast tumors and lymph node metastases (n = 106). All of these patients had no pre-operative chemotherapy or radiotherapy and the pathological parameters of the patients together with patients without lymph node metastasis (n = 83) were summarized in Table 1. This study was approved by the Research Ethics Committee of Hunan Cancer Hospital, China and informed consent was obtained from all of the patients. The experiments performed in this study comply with the current laws of China relating to the use of human subjects.

The iTRAQ kit was purchased from AB Sciex (USA) and proteomic analysis performed essentially as described in the manufacturer's instructions. The prepared lysates were treated with 4 µl reducing reagent for 1 h at 60°C and then blocked by 2 µl Cysteine blocking reagent for 10 min at room temperature. After centrifugation, the supernatant was collected and incubated with trypsin and tetraethylammonium bromide (TEAB) overnight at 37°C. The next day, the prepared sample and iTRAQ reagents were mixed together. Afterwards, two-dimensional LC-MS/MS was used to analyze the labeled samples and Proteinpilot 4.0 (AB Sciex) protein retrieval software was used to retrieve the separated peptides. This process was repeated for three times and the average was accepted as the final results. A greater than 1.5-fold change in expression was considered different between the primary breast tumor tissue and the paired metastatic lymph node tissue. This research was assisted by the FitGene BioTechnology proteomics platform (http://www.fitgene.com).

Paraffin sections were baked in oven at 60°C for 2 h, and then dewaxed in two changes of xylene for 10 min each, followed by hydration in graded ethanol for 5 min each. For antigen retrieval, the slides were immerged into citric acid retrieval solution and heated in a microwave and cooled down at room temperature. Endogenous peroxidase activity was quenched by 3% H2O2 for 15 min. After blocking of nonspecific binding, the sections were incubated with the NUCB2 antibody (1:200, Abcam, UK) at 4°C overnight. Next, the sections were incubated with biotinylated secondary antibody followed by incubation with the streptavidin-peroxidase conjugate and color development using the DAB/H2O2 system. A negative control was included by replacing the primary antibody with PBS.

The immunostaining was evaluated by two independent experienced pathologists. The results of the two reviewers were compared and any discrepant scores were re-examined by both pathologists to reach a consensus score. A total immunostaining score (TIS) was calculated as the product of a proportion score and an intensity score. The proportion score described the estimated fraction of positive-stained tumor cells (0: 0-4%; 1: 5-25%; 2: 26-50%; 3: 51-75%; 4: >75%). The intensity score represented the estimated staining intensity (0: no or marginal staining; 1: weak; 2: moderate; 3: strong). The TIS ranged from 0 to 12. We defined 0 as negative, 1-4 as weak positive, 5-8 as moderate positive, and 9-12 as strong positive.

The difference of NUCB2 expression between paired primary breast tumor and metastatic lymph node was analyzed with McNemar test. In addition, the difference of NUCB2 expression between every other two different groups of patients with breast disease was evaluated with χ2 test. The relationship between NUCB2 expression and clinicopathologic characteristics was examined with χ2 test. The survival rate was calculated with the Kaplan-Meier method and examined with log-rank test. Multivariate Cox hazard analysis was used to analyze the role of NUCB2 in breast cancer prognosis.

The expression of NUCB2, which is one of the most up-regulated proteins associated with DNA binding, was 1.92-fold higher in metastatic lymph node tissues than primary breast tumor tissues. According to GO analysis, NUCB2 is located in various compartments of the cell and its molecular functions include ion binding and DNA binding (http://www.uniprot.org/uniprot/P80303). The basic biological information about NUCB2 was summarized in Table 3. 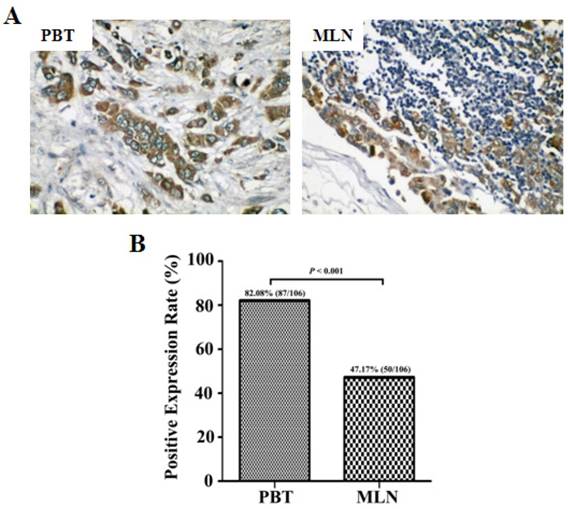 Kaplan-Meier survival curves of patients with positive and negative NUCB2 expression. The overall survival rate of breast cancer patients that were positive or negative for NUCB2 expression was calculated with the Kaplan-Meier method and examined with log-rank test. There was significant difference between the two groups (log-rank P = 0.004). 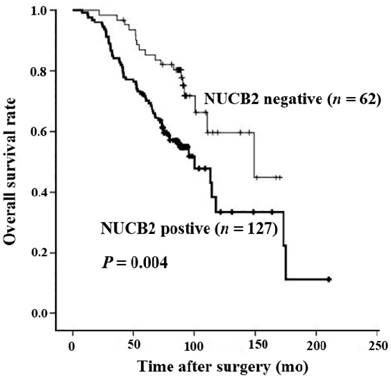 # Unknown and other type cases are excluded from P-value calculation.

In the present study, we employed the iTRAQ proteomic technique to screen the differentially expressed proteins between primary breast tumor and metastatic lymph node tissues. The initial search identified 4,837 confidential proteins and 643 differentially expressed proteins. Compared with primary breast tumors, 402 proteins were up-regulated and 241 proteins down-regulated in metastatic lymph nodes. The majority of these proteins are associated with RNA/DNA binding, enzyme binding and cytoskeleton protein binding, etc. These proteins are involved in lamellipodia formation [18, 19], angiogenesis [20, 21], circulating tumor cells [22], EMT [23], and tumor microenvironment [24] and may affect cell motility [25], cell proliferation [26, 27], invasion, migration, and metastasis [28, 29]. At the same time, several inflammatory factors were identified, such as complement C1r and complement component C8 gamma chain (C8G) etc. This might be an indication of a complex background including inflammatory response in the development of breast cancer metastasis [30, 31].

NUCB2 is a calcium-binding protein composed of 396 aa residues with a 24-aa signal peptide [23]. The human NUCB2 gene spans 55 kb and contains 14 exons and 13 introns [32]. It is highly conserved across mammalian and non-mammalian vertebrates, suggesting its physiological importance [33]. It is ubiquitously expressed in normal tissues, such as lymphoid tissue, pancreas, gut, and adipose [34, 35]. NUCB2 appears to play an important role in regulating energy homeostasis and food intake [36]. Adipose tissue plays important role in energy homeostasis and NUCB2 protein expression was significantly increased in high-fat-fed mice [37]. Li et al. reported that in high fat diet induced obese mice, gastric mTOR signaling and NUCB2 were increased [38]. Moreover, the activity of gastric mTOR is linked to the regulation of gastric NUCB2. A relation between obesity and ovarian cancer mortality was established and the N-terminal fragment of NUCB2 can inhibit the proliferation of human ovarian epithelial carcinoma HO-8910 cells through inducing apoptosis via the mTOR and RhoA/ROCK signaling pathway [39].

In addition, NUCB2 was also reported to be related to the development and progression of renal clear cell carcinoma [40] and prostate cancer [41-43]. In breast cancer, it has a positive association with lymph node metastasis and the ER status of the patients. Results of siRNA transfection experiments showed that NUCB2 was involved in cell proliferation, migration, and invasion in both ER-positive MCF-7 and ER-negative SK-BR-3 cells [44]. In our study, we analyzed the correlation between NUCB2 expression and clinicopathological features in 189 breast cancer patients. We demonstrated that NUCB2 has a significant positive correlation with the extent of nodal invasion, poorly clinical stage, and ER positivity. Obesity causes an increase in local estrogen production, which has a close correlation with breast cancer [45]. Suzuki et al. [23] demonstrated that NUCB2 was up-regulated by estrogen and our study showed that there was a positive correlation between NUCB2 expression and the ER status. Moreover, we found that breast cancer patients with high NUCB2 expression had a significantly poorer overall survival. Cox hazard regression analysis showed that NUCB2 expression and clinical stage were associated with overall survival of breast cancer. All these observations suggest that NUCB2 plays an important role in breast cancer progression and may be a potential prognostic biomarker for poor survival of breast cancer patients. Compared with the recently described serum biomarkers for breast cancer metastasis such as Y-box binding protein 1 (YB-1) [46] and HER2 [47], the immunohistochemical biomarker NUCB2 offers the advantages of increased sensitivity and higher specificity, because immunohistochemistry can reveal a biomarker change at an earlier stage and in a more specific location than a serum biomarker.

This work was supported by the National Natural Science Foundation of China (Grant No. 81472496 to XD) and the Hunan Province Science and Technology Project (Grant No. 2014FJ6090 to LZ). We thank Proteomic technique platform by FitGene BioTechnology CO., Ltd (Guangzhou, P. R. China, http://www.fitgene.com).