Background: Although β-arrestin-2 (β-arr2) and CXCR2 have been shown to affect various malignant tumors, their exact roles in lung cancer remain unclear. We investigated expression of β-arr2 and CXCR2 in patients with non-small cell lung cancer (NSCLC) and their correlation with lymph node metastasis and prognosis.

Methods: We reviewed medical records of 136 patients with NSCLC who underwent surgical resection, and assessed their specimens immunohistochemically for expression of β-arr2 and CXCR2 in primary tumors and metastatic lymph nodes (MLNs), respectively.

Expression of the ELR+ (glutamic acid-leucine-arginine) chemokines, CXCL1-3 and CXCL5-8, in lung cancer cells has been associated with malignant transformation, cell migration, angiogenesis, tumorigenesis, and metastasis of lung cancer in vitro and in vivo [1, 2]. The ELR+ chemokines induce down-stream cellular signals mediated via CXC chemokine receptor 2 (CXCR2) [3, 4], which is a G-protein-coupled receptor (GPCR). As with other GPCRs, CXCR2 is modulated by desensitization and internalization via several adaptor/scaffold proteins, including β-arrestins [5, 6, 7].

Arrestins were identified as mediators of GPCR desensitization and endocytosis, and bind to most GPCRs after agonist activation and phosphorylation of receptors by GPCR kinases. There are four members of the arrestin family: Visual arrestin (arrestin 1) is found in retinal rods and cones, whereas X-arrestin (arrestin 4) is located exclusively at retinal cones; β-arrestin 1 and 2 (arrestins 2 and 3, respectively) are ubiquitously distributed. β-arrestin-1 and -2 (β-arr2), which share a high conserved sequence similarity, bind to the CXC chemokine receptors CXCR1 and CXCR2 and regulate cellular responses to these receptors [6, 8]. Reportedly, β-arr2-deficient (β-arr2-/-) mice have delayed CXCR2 internalization but enhanced cellular responses, including G protein activation and respiratory burst [9]. Further, β-arr2-/- mice exhibited significantly increased Lewis lung cancer tumor growth and metastasis relative to β-arr2+/+ mice; β-arr2 modulates tumorigenesis by regulating inflammation and angiogenesis through activation of CXCR2 [2]. However, the pathological significance of β-arr2 and CXCR2 in lung cancer remains unclear. Therefore, we examined expression of β-arr2 and CXCR2 in primary tumors and metastatic lymph nodes (MLNs) respectively from patients with non-small cell lung cancer (NSCLC), and association between these expressions and clinicopathological characteristics.

Human lung adenocarcinoma cell lines A549, SPC, and H1975 were obtained from American Type Culture Collection (Manassas, VA). The A549 and H1975 cell lines were grown in RPMI medium supplemented with 10% fetal bovine serum (FBS) and 1% penicillin-streptomycin (PS). SPC cells was cultured in DMEM supplemented with 10% FBS and 1% PS. All cells were maintained in a humidified atmosphere of 5% CO2 at 37°C.

We enrolled 136 patients with pathological confirmed, newly diagnosed NSCLC who underwent surgery between January 2006 and June 2008 at the Provincial Hospital affiliated to Shandong University. The eligibility criteria were: (a) Karnofsky performance score≥70; (b) age 18-75 years; (c) adenocarcinoma (ADC) or squamous cell carcinoma (SCC); (d) underwent adjuvant therapy after surgery without distant metastasis; (e) survived for>3 months after surgery; and (f) followed up at least 4 years after surgery. Patients were excluded if they (a) were previously diagnosed with another cancer; (b) were diagnosed simultaneously with multiple tumors; (c) received preoperative treatment; or (d) died of any cause other than lung cancer. This study was performed in accordance with the ethical standards formulated in the Helsinki Declaration of 1964 and approved by the Shandong Provincial Hospital's Ethics Committee.

Resected specimens were partly fixed in 4% formalin and embedded in paraffin for immunohistochemistry (IHC), and partly frozen at -80°C for proteins assay. Multiple IHC-stained sections of NSCLC tumors and their related lymph nodes were examined for β-arr2 and CXCR2. Tumor differentiation and stage were determined according to the WHO and UICC criteria, respectively. Patients' clinicopathological characteristics are summarized in Table 1.

*Age ranges from 18 to 75 years according to the inclusion criteria.

All tissue blocks were sectioned (thickness: 4 µm). We made 6 sections for every individual, 2 of which were stained with hematoxylin-eosin for histopathological analysis by two pathologists; the others were used for immunostaining. Sections were deparaffinized and rehydrated as normal; 3% H2O2 was then used to block endogenous peroxidase activity. After that, antigens were retrieved by microwave, and non-specific antigens were blocked with goat serum. Sections were then incubated overnight at 4°C with primary antibodies diluted in PBS with 0.05% Tween-20: 1:500 for anti-β-arr2 antibody (Cell Signaling Technology, Danvers, MA, USA), and 1:200 for anti-CXCR2 antibody (Abcam Ltd., HKSP, HK). HRP-conjugated conjugated secondary antibody was applied to detect immunoreactivity. Slides were counterstained with hematoxylin, washed, dehydrated in an ethanol gradient, and cover-slipped. The primary antibodies were substituted by PBS as negative controls.

To evaluate β-arr2 and CXCR2 expressions, we counted 1,000 tumor cells in contiguous 400× microscopic fields. β-arr2 was predominately expressed in cytoplasm and nucleus; and CXCR2 was mostly expressed in membrane and cytoplasm. A staining index (SI) was calculated as a product of staining intensity (0-3) and area of positive tumor cell nuclei (0: none; 1: <10%; 2: 10-50%; and 3: >50%) [10]. Degree of β-arr2 and CXCR2 expressions was designated as follows: 0-1, low expression; 2-3, high expression. The results were assessed by two independent pathologists (X. Lin and Y. Liu), who were blinded to the immunohistological and clinical status. There was 5% disagreement; for discrepancies, the slides were simultaneously reexamined by two pathologists under a multi-headed microscope until consensus was achieved.

Protein samples were dissolved in a sample buffer containing 1mM β-mercaptoethanol, Samples were analyzed by SDS-PAGE with a 4%-12% separation gel. After SDS-PAGE, the proteins were transferred to nitrocellulose membranes (GE Healthcare) at 4°C for 1 h and then blocked for 1 h at room temperature in a solution of 5% (w/v) skimmed milk powder and 0.02% (w/v) Tween 20 in PBS (pH 7.5). Incubation with appropriate primary antibodies was performed overnight at 4°C. This was followed by washing with PBST and incubation with a horseradish peroxidase-labeled secondary antibody (Pierce) for 1 h at room temperature. The detection was made with ECL (Pierce). The films were exposed at different time points, and then developed and fixed.

Expressions of β-arr2 and CXCR2 in ADC and SCC

To verify the consistency of IHC and western blot results for β-arr2 and CXCR2 expressions, namely, to confirm the reliability of immunohistochemistry results, we randomly selected 4 ADC and 4 SCC samples from the 136 cases, together with 3 NSCLC cell lines, for further IHC and western blot analyses, respectively. 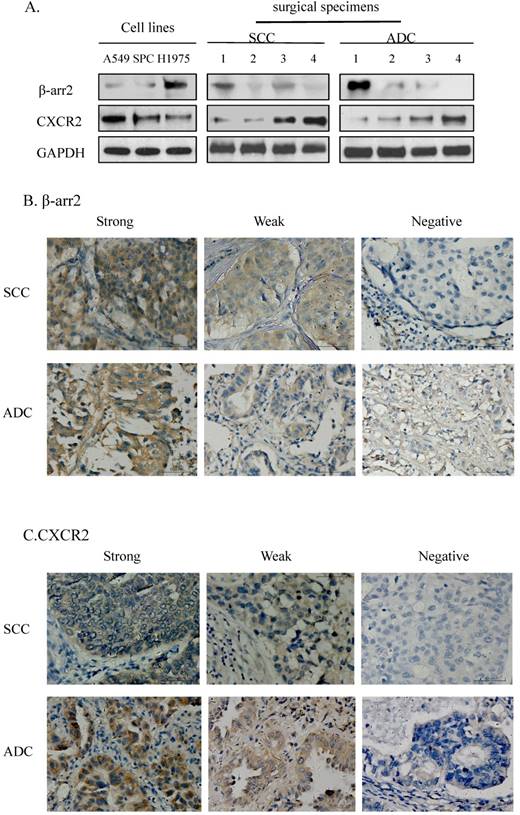 β-arr2 and CXCR2 associated with MLNs

Among the 136 patients, there were 87 cases who had paired surgical specimens of primary and MLN lesions. IHC testing for β-arr2 and CXCR2 in these specimens showed β-arr2 was losing during lung cancer metastasis to lymph nodes, in both ADC and SCC specimens (Figure 2). Notably, when cells were in blood or lymph vessels, β-arr2 was almost absolutely depleted. Conversely, CXCR2 expression was higher in vessels and MLN than in primary lesions. To confirm this presentation, we used the Wilcoxon signed-rank test to analyze β-arr2 and CXCR2 expression between paired primary tumors and MLNs. β-arr2 expression was significantly lower in MLNs than primary lesions (Z=-2.315; P=0.021), whereas CXCR2 was expressed significantly more in MLNs than in primary lesions (Z=-3.712; P<0.001; Table 2b). 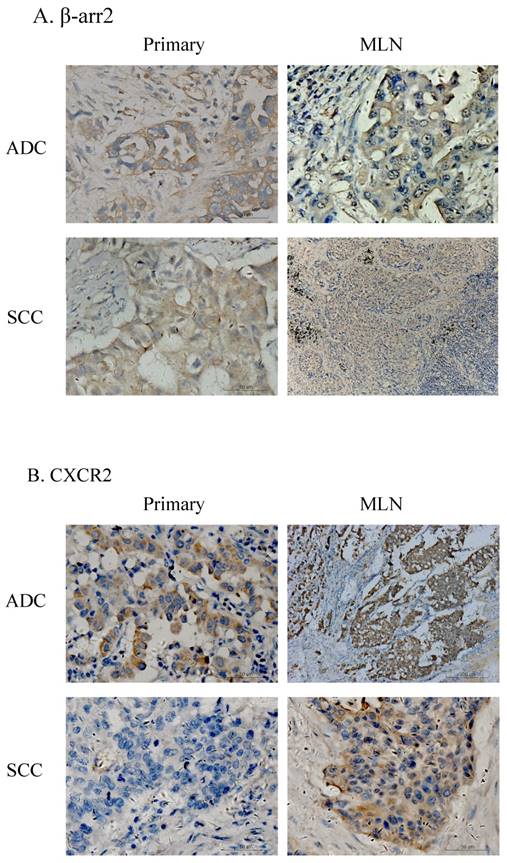 *The values were analyzed by Wilcoxon signed-rank test. 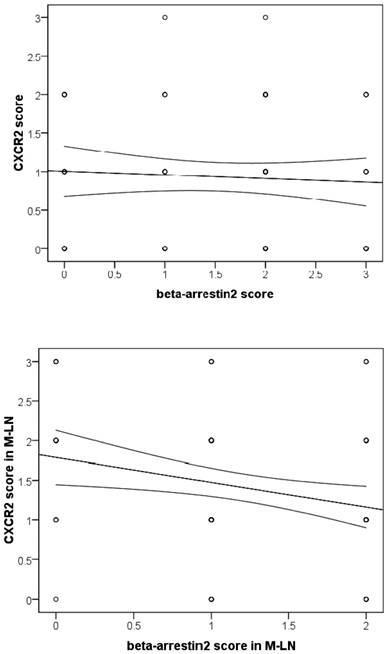 β-arr2 associated with CXCR2 in MLN

As we observed, β-arr2 expression decreased, whereas CXCR2 increased, in the process of lymph node metastasis. As combining with β-arr2 is a mediator of GPCR desensitization and endocytosis, we inferred that β-arr2 modulates lymph node metastasis by activating CXCR2. Therefore, we analyze the relationships between β-arr2 and CXCR2. Although no relationship between β-arr2 and CXCR2 was observed in primary lesions (r=-0.065, P=0.548), an inverse relationship was observed in MLNs (r=-0.263, P=0.012; Spearman rank correlation coefficient; Figure 3).

β-arr2Low & CXCR2High in MLN correlated with poor prognosis of NSCLC

β-arr2 levels decrease during NSCLC metastasis to lymph nodes, for both ADC and SCC tumors (Figure 2), whereas CXCR2 expression was higher in MLNs than in primary lesions. As we had found expressions of β-arr2 and CXCR2 in MLNs to be inversely related, we sorted 36 patients with β-arr2 high & CXCR2 low expressions in MLN (β-arr2High/CXCR2Low group) and 38 patients with β-arr2 low & CXCR2 high expressions in MLN(β-arr2Low/CXCR2High group), and used a Kaplan-Meier survival curve to compare their OS. We found the β-arr2Low/CXCR2High group had worse 4-year OS (Log-rank: χ2=5.926, P=0.015; Figure 4). 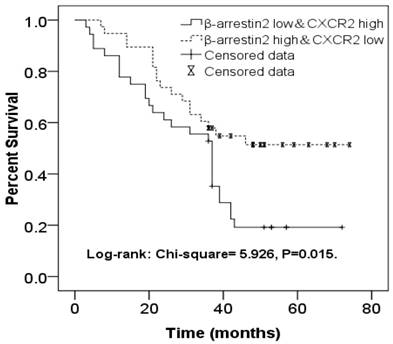 β-arrestins are not only mediators for GPCR, but also scaffold in many intracellular signaling networks such as the Hedgehog, Wnt, Notch, and TGFb pathways; they also interact with downstream kinases including the MAPK and Akt cascades [7, 8, 19-21]. Involvement of arrestins in so many independent signaling events indicates their indispensability for these multifaceted molecular processes [22, 23]. Recent studies have shown that β-arr2 mediates TβRIII-induced inhibition of NFκB-dependent cell migration [24]; and it may also serve as an E3 ligase adaptor for TRAF6 toward TAK1 [25]. These studies and our present findings indicate that β-arr2 has an important function in cancer cell growth and migration.

Higher expression levels of CXCR2 ligands were observed in several tumor types, including melanoma, lung and colon carcinoma cells, and was associated with tumor angiogenesis and leukocyte infiltration [26-28]. CXCR2-deficient mice displayed impaired angiogenesis and tumor development [29, 30]. These studies suggest that CXCR2 is crucial to tumor development, which is also supported by our data. Our data imply that higher CXCR2 expression is associated with lymph node metastasis and poor prognosis. We also found CXCR2 expression was significantly higher in MLN than in primary lesions (Wilcoxon signed-rank test); and that β-arr2 and CXCR2 were significantly inversely expressed in MLNs. Previous studies suggest that β-arr2 modulates tumorigenesis by regulating inflammation and angiogenesis through activation of CXCR2 in vitro [2, 6, 8, 9]. Together, these data suggest that β-arr2 regulates lymph node metastasis of lung carcinoma by up-regulation of CXCR2.

5. Fan GH, Yang W, Wang XJ, Qian Q, Richmond A. Identification of a motif in the carboxyl terminus of CXCR2 that is involved in adaptin 2 binding and receptor internalization. Biochemistry. 2001;40:791-800

26. Varney ML, Johansson SL, Singh RK. Distinct expression of CXCL8 and its receptors CXCR1 and CXCR2 and their association with vessel density and aggressiveness in malignant melanoma. Am J Clin Pathol. 2006;125:209-16