Microarray Analysis of the Expression Profile of Long Non-Coding RNAs Indicates lncRNA RP11-263F15.1 as a Biomarker for Diagnosis and Prognostic Prediction of Pancreatic Ductal Adenocarcinoma

Pancreatic ductal adenocarcinoma (PDAC) is a devastating malignancy with poor prognostic outcomes. Accumulating evidence has demonstrated that long non-coding RNAs (lncRNAs) play an important role in the development and progression of carcinogenesis. Nevertheless, little is known about the role of lncRNAs in PDAC. The aim of the current study was to find differentially expressed lncRNAs and related mRNAs in human PDAC tissues and adjacent normal tissues by microarray analysis, and investigate the relationship between lncRNA RP11-263F15.1 levels and the clinicaopathological features of PDAC patients. It was found that 4364 lncRNAs and 4862 related mRNAs were significantly dysregulated in PDAC tissues as compared with adjacent normal tissues with a fold change ≥2.0 (P<0.05). GO and pathway analyses showed that the up-regulated gene profiles were related to several pathways associated with carcinogenesis, while the down-regulated gene profiles were closely correlated with nutrient metabolism. RP11-263F15.1 levels were associated with histologic differentiation (P=0.001). Besides, Kaplan-Meier analysis showed that high expression of RP11-263F15.1 was associated with poor outcomes, but multivariate analysis suggested that RP11-263F15.1 was not an independent factor for predicting prognosis of PDAC. In conclusion, these data indicate that differentially expressed lncRNAs and mRNAs were involved in the carcinogenesis of PDAC, and RP11-263F15.1 may prove to be a potential biomarker for the diagnosis and prognostic prediction of PDAC.

Pancreatic ductal adenocarcinoma (PDAC) remains one of the most devastating malignancies with a 5-year survival rate less than 5% [1]. Early diagnosis in combination with comprehensive therapies including surgical resection, adjuvant chemotherapy and radiotherapy can increase the 5-year survival rate significantly [2]. The clinical symptoms of PDAC are usually insidious due to the concealed location. When the PDAC tumor is large enough to affect the adjacent organs or nerves, it is often too advanced to be treated radically. Currently, carbohydrate antigen 19-9 (CA 19-9) is widely acknowledged as a marker of PDAC diagnosis [3], but it is not an ideal tumor biomarker for early diagnosis of PDAC due to its low sensitivity [4]. Thus, it is necessary to search novel biomarkers for early diagnosis of PDAC for the sake of reducing the high morbidity and mortality of PDAC.

Long non-coding RNA (lncRNA) generally refers to any non-coding RNA with a length of more than 200bp and without protein coding potential [5]. Although IncRNA was suggested as “junk” in the human genome, increasing evidence has revealed that lncRNA has multiple biological functions in gene expression including epigenetic regulation, transcriptional interference and post-transcriptional regulation [6-8]. Over the past few years, comprehensive studies have demonstrated that lncRNA is closely related to the progression of a variety of diseases including autoimmune diseases, cardiovascular diseases and cancers [9-12]. Notably, previous studies showed that some lncRNAs aberrantly expressed in the process of tumorigenesis and cancer progression, suggesting that they may be potential biomarkers for the diagnosis and prognostic prediction of cancer patients [13]. Zhou et al. [14] reported that the expression level of H19 in the plasma of gastric cancer patients was significantly higher than that in healthy controls. Li and colleagues reported that lncRNA ZFAS1 functioned as an oncogene in hepatocellular carcinoma (HCC) and was associated with poor prognosis and metastasis [15]. Several lncRNAs (AFAP1-AS1, ENST00000480739 and BC008363) also showed a potential diagnostic or prognostic value in patients with PDAC [16-18]. However, the role of lncRNA involvement in carcinogenesis and cancer progression remains unknown entirely.

In the present study, we analyzed and compared lncRNA and mRNA expression profiles between PDAC tissues and paired adjacent noncancerous tissues by microarray, and consequently validated them by RT-qPCR, hoping that the obtained results would provide further insights into the pathogenesis of PDAC.

Included in this study were 71 cancer tissues and 71 adjacent normal tissues obtained from PDAC patients who underwent radical or partial resection of the pancreas at Changhai Hospital (Shanghai, China) between April 2014 and March 2016. No patient had received chemotherapy or radiotherapy before sample collection. The corresponding adjacent non-cancerous tissues were taken at least 5cm away from the tumor edge. All the specimens were stored with RNAlater® Solution (life technologies, Carlsbad, CA) at 4°C overnight, and then transferred to -80°C for long-term storage after removing the supernatant. The diagnosis of PDAC in all patients was confirmed by histopathology by two experienced pathologists (Hui Jiang and Jianming Zheng). Clinicopathological data were obtained from the Department of Pathology, Changhai Hospital. Amongst these specimens, 10 (5 pairs) were used for lncRNA microarray analysis, and 66 pairs were analyzed to validate the microarray results by RT-qPCR.

Total RNA was extracted from the frozen PDAC tissues and corresponding adjacent normal tissues by RNAiso Plus (TAKARA, Dalian, China). Each specimen was quantified with the NanoDrop Lite spectrophotometer (Thermo Scientific, MA) and RNA integrity was assessed by standard denaturing agarose gel electrophoresis. Total-RNA (1000ng) was converted to cDNA by reverse-transcription with ReverTra Ace qPCR RT Kit (TOYOBO, Osaka, Japan). The reverse transcription procedure was performed at 65℃ for 5 min, 42℃ for 18 min, and 98℃ for 5min.

In total, 10 specimens (5 pairs) obtained from PDAC patients were included in human microarray analysis by using the Agilent Array platform (Agilent Technology) according to the manufacturer's standard protocols. After removal of rRNA, mRNA was purified from total RNA with mRNA-ONLY™ Eukaryotic mRNA Isolation Kit (Epicentre, WI). Then, each specimen was amplified and transcribed into fluorescent cRNA along the entire length of the transcripts without 3' bias by a random priming method. The labeled cRNAs were hybridized onto the Human LncRNA Array v2.0 (8 x 60K, Arraystar). The slices were washed and the arrays were scanned with Agilent Scanner (G2505B). The acquired array images were analyzed by using Agilent Feature Extraction software (version 10.7.3.1). Quantile normalization and subsequent data processing were performed using the GeneSpring GX v11.5.1 software package (Agilent Technologies). Differentially expressed LncRNAs and mRNAs with statistical significance between the two groups were identified through Volcano Plot filtering. Differentially expressed LncRNAs and mRNAs between two paired specimens were identified through Fold Change filtering.

Subsequently, cDNA was subjected to a polymerase chain reaction (PCR) amplification step in triplicate using the Step One Plus™ System (Life Technologies, Waltham, MA). Real-time PCR was conducted by using SYBR Premix Ex Taq (TliRNaseH Plus) (TAKARA, Dalian, China) with ROX Reference Dye. All the ΔCt values of the specimens were normalized to the endogenous control U6 level. The details of primers used in PCR are shown in Table 1. The PCR amplification cycle was applied as follows: one cycle at 95℃ for min; 40 cycles of 95℃ for 5s, and 60℃ for 30 s.

Primers used for cDNA synthesis and real-time PCR of lncRNAs

All the statistical analyses were conducted by SPSS 19.0 (SPSS, INC; Chicago, IL). Independent-samples t-test was used in differential expression levels of lncRNAs and mRNAs. GO and KEGG pathway analyses were evaluated by Fisher's exact test. χ2-test was used to estimate the differences between groups. Kaplan-Meier analysis (KM analysis), univariate and multivariate Cox regression were applied to evaluate the outcomes of patients with PDAC. Two-tailed P value was employed and P<0.05 was considered statistically significant.

Arraystar (Rockville, MD) Human LncRNA Microarray v2.0 is designed for global profiling of human LncRNAs and protein-coding transcripts. 33,045 LncRNAs and 30,215 coding transcripts can be detected by the second-generation LncRNA microarray. According to microarray data, a total of 4364 significantly dysregulated lncRNAs (Fold Change ≥2.0, P<0.05) including 2365 up-regulated and 1999 down-regulated lncRNAs were found to be differentially expressed between the PDAC and corresponding adjacent normal tissues (Fig 1). In addition, 3857 up-regulated mRNAs and 1005 down-regulated mRNAs were determined between them (Fold Change ≥2.0, P<0.05). 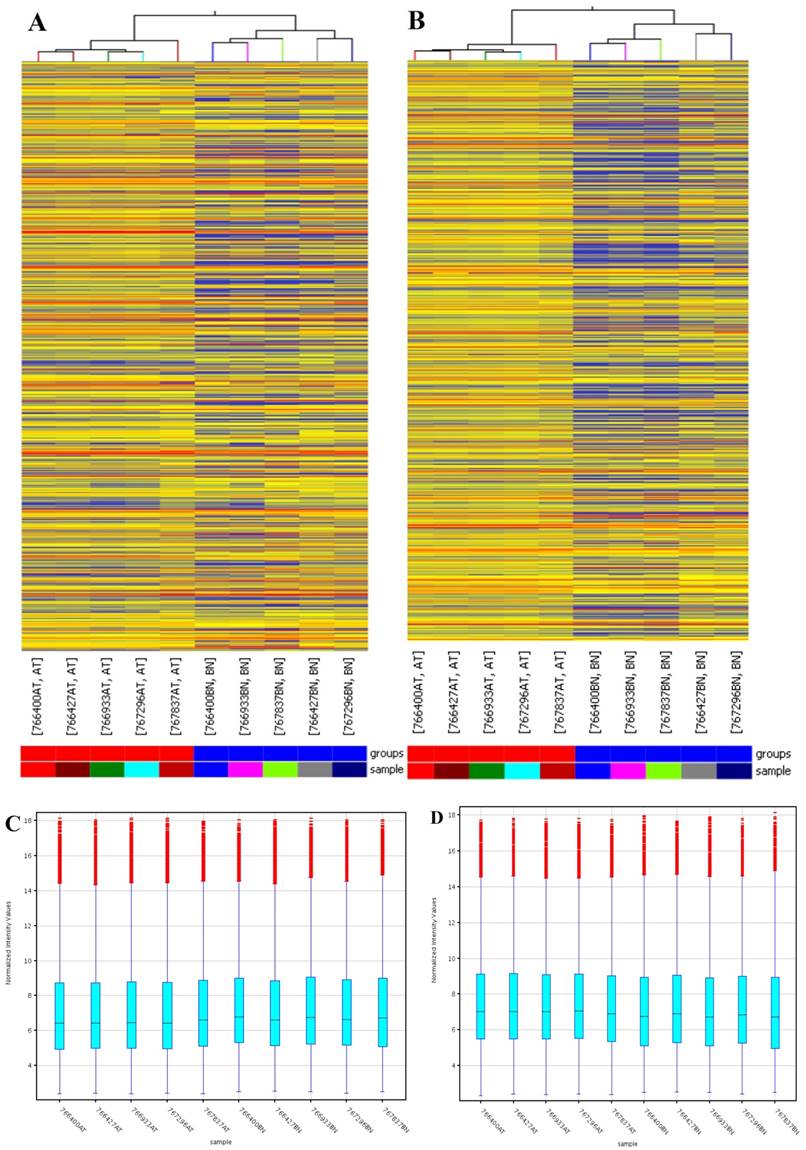 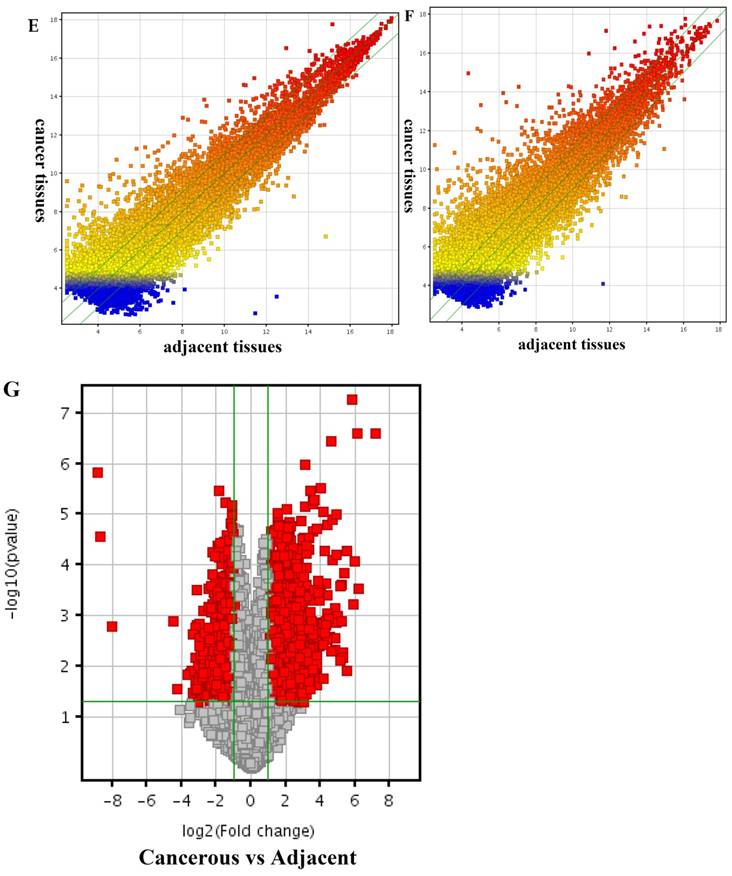 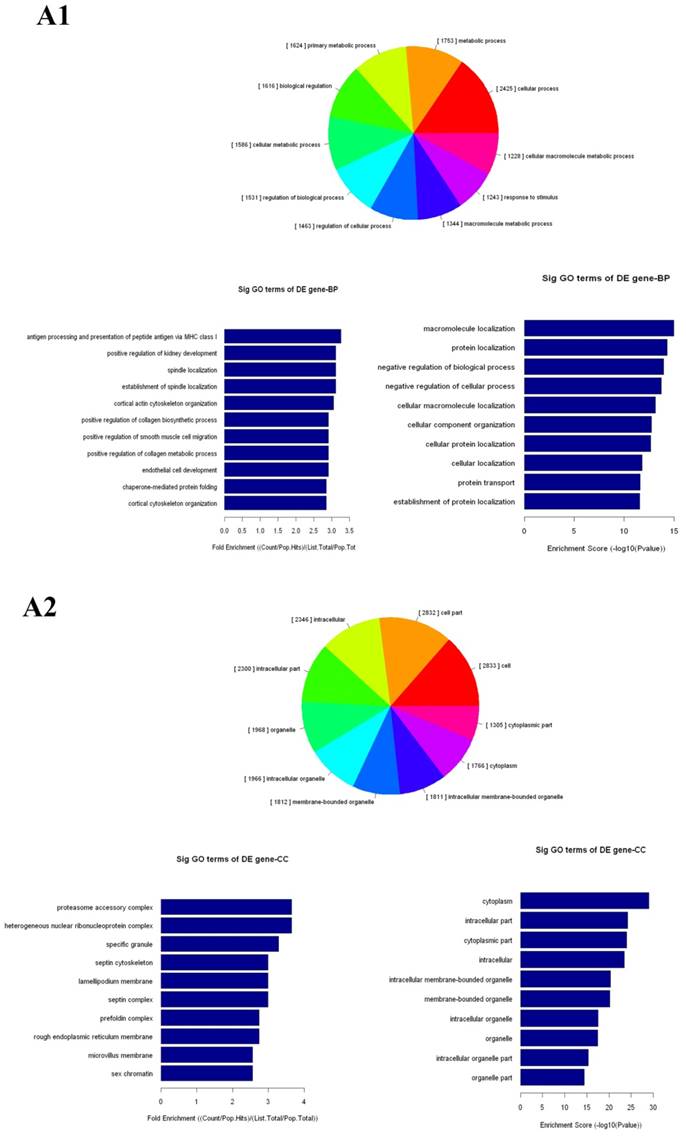 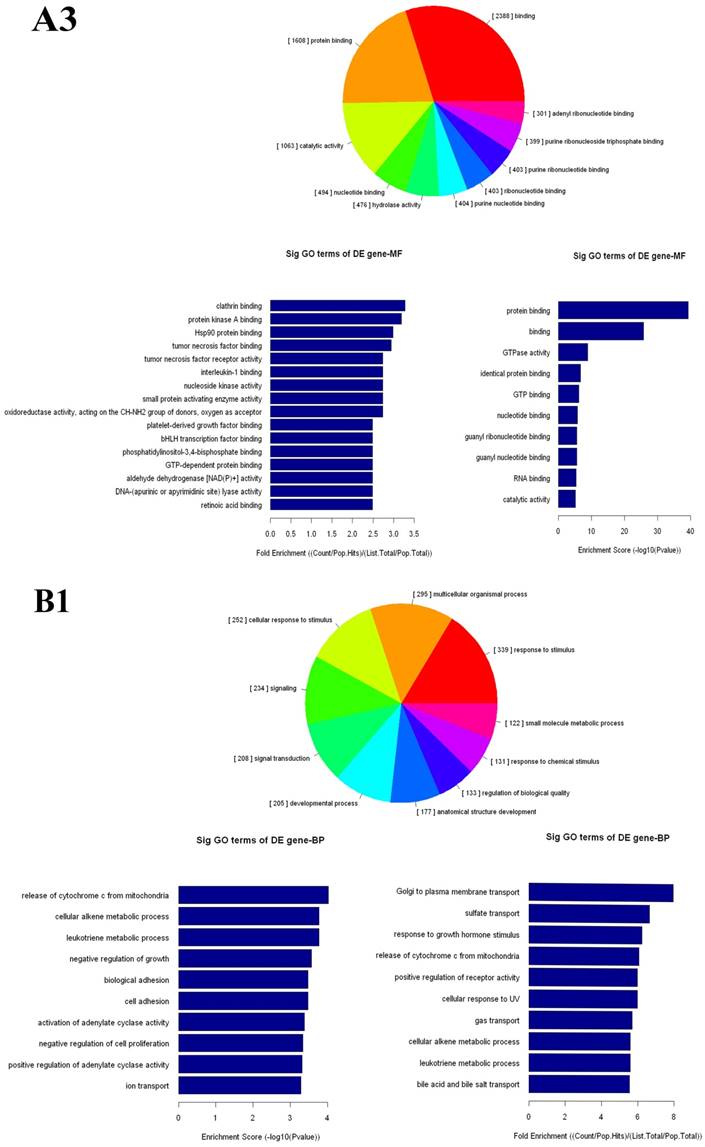 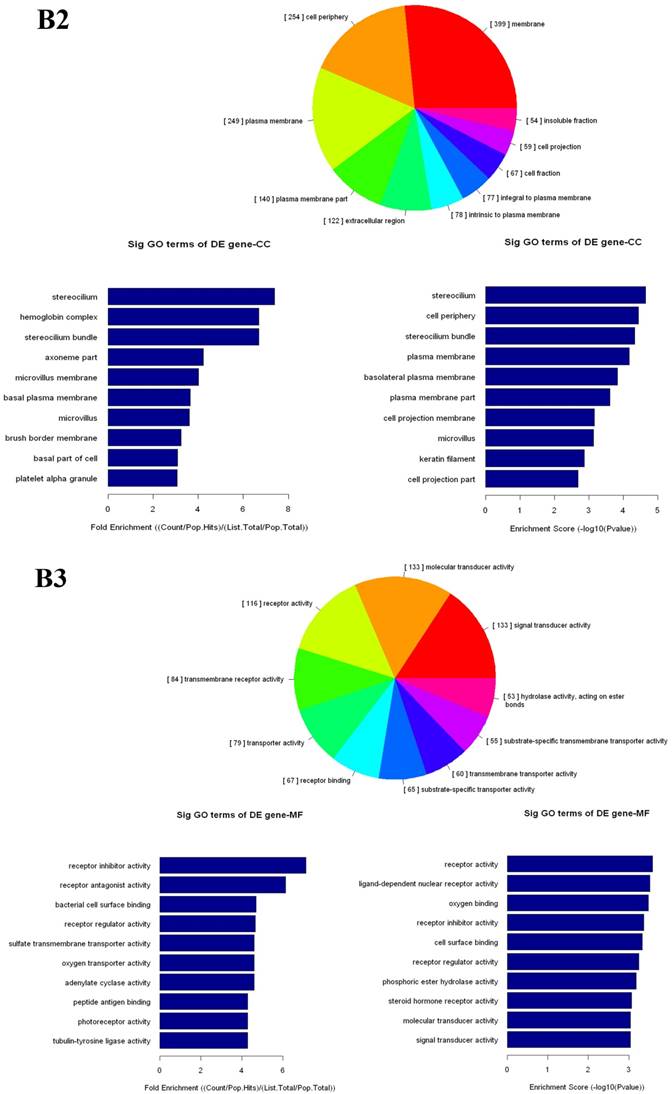 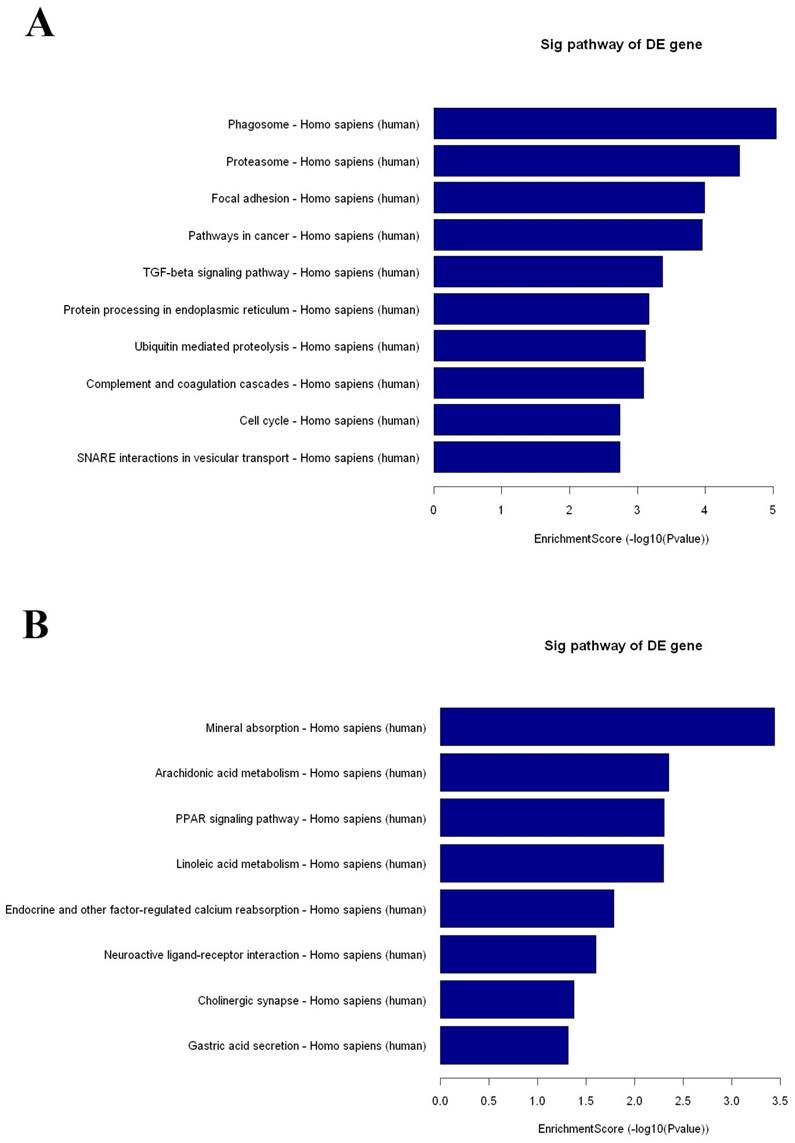 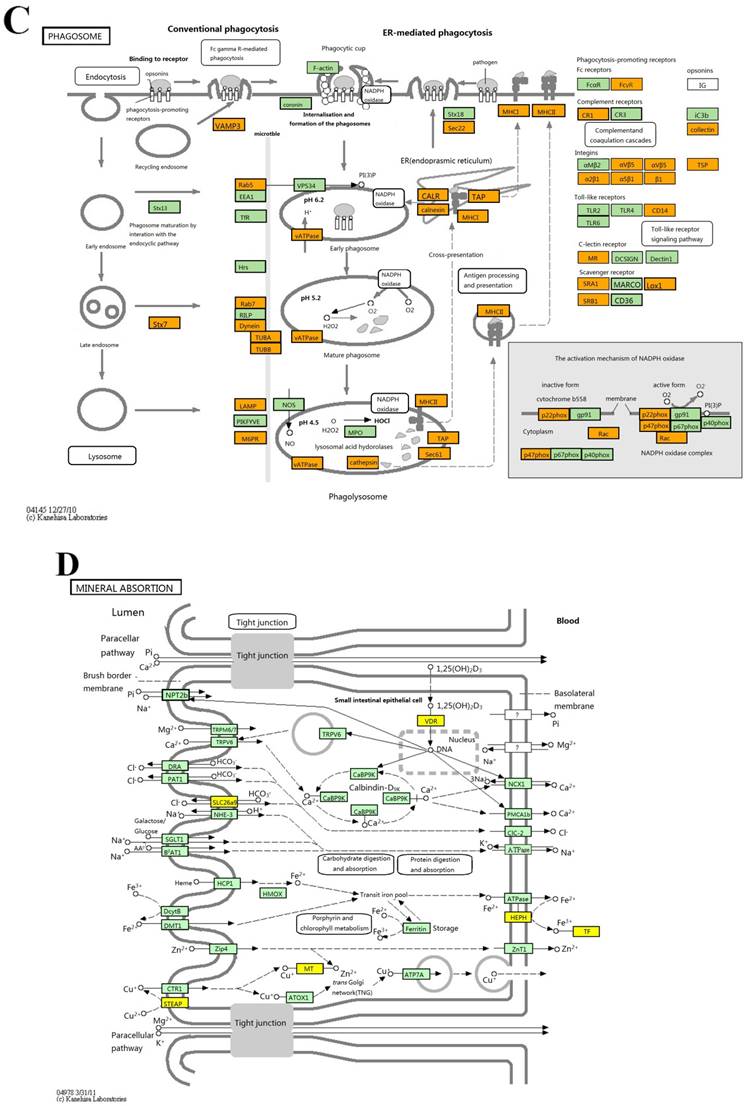 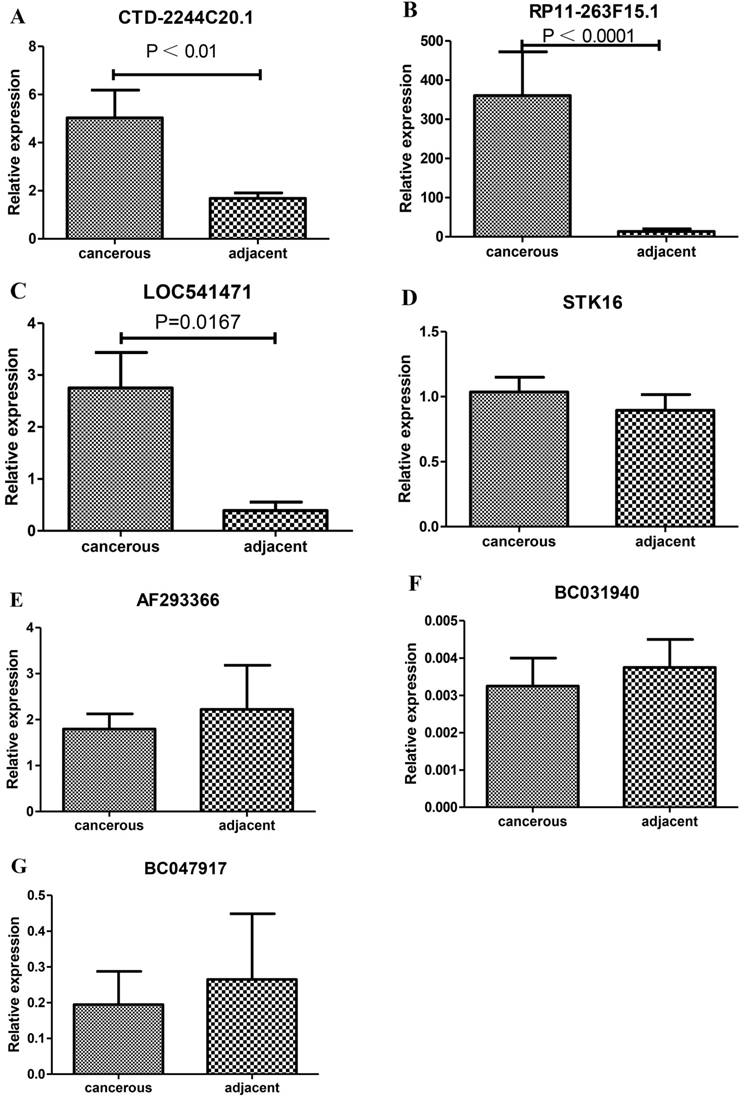 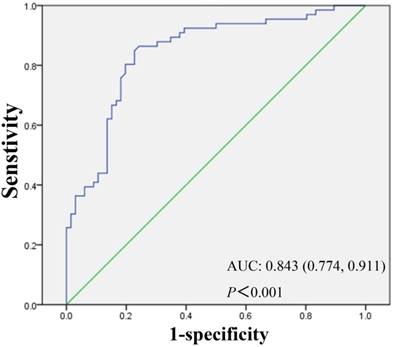 Pancreatic ductal adenocarcinoma is the commonest form of pancreatic cancer with a low survival rate due to its highly malignant behavior [18, 19]. Our current understanding about the pathogenesis of PDAC mainly depends on numerous protein-coding genes, knowing that some protein-coding genes play important roles in the initiation and progression of PDAC. It was reported [20] that KRAS mutation was detectable in 95% human PDAC cases, and the acquisition of mutant KRAS was an initial event in PDAC. Mutant KRAS gene was found to be a driver of PDAC development through promoting cell proliferation, differentiation and invasion [21, 22]. Nevertheless, the molecular mechanism underlying PDAC has not been clarified clearly, making PDAC a clinically challenging disease [23]. In recent years, emerging evidence has demonstrated that lncRNAs play important roles in multiple functions in PDAC, including cell growth, survival, invasion, metastasis, angiogenesis and apoptosis [24]. Identification of lncRNA involvement in the carcinogenesis of PDAC may provide new strategies for the diagnosis and treatment of PDAC.

The clinical characteristics of patients with pancreatic ductal adenocarcinoma 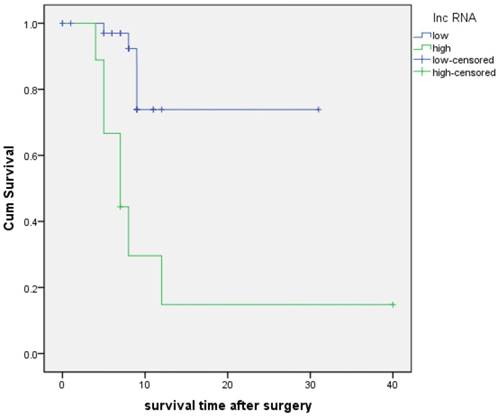 Univariate and multivariate survival analysis in patients with PDAC.

Summary of microarray studies on lncRNA related to PDAC.

Further GO and pathway analyses were utilized to study the biological functions of lncRNAs and relative mRNAs. The result of GO analysis showed that the up-regulated gene profile was closely correlated with the protein function such as protein localization, proteasome accessory complex and macromolecule localization. The down-regulated gene profile includes Golgi to plasma membrane transport, release of cytochrome C from mitochondria, plasma membrane and receptor periphery. This result supports the notion that although lncRNAs do not code protein sequence, they can regulate protein metabolism and functions to affect the biological process. Meanwhile, pathway analysis showed that the main up-regulated gene profile was associated with carcinogenesis such as phagosome, focal adhesion, pathways in cancer, transforming growth factor-beta (TGF-beta) signaling pathway and cell cycle. The result is consistent with previous studies in human PDAC tissues, reporting that the up-regulated genes in PDAC were associated with pathways in cancer [27]. Another study reported that TGF-beta receptor 1 and epidermal growth factor (EGF) played important roles in the pathogenesis of pancreatic cancer [28]. Surprisingly, pathway analysis showed that the main down-regulated gene profile was correlated with nutrition metabolism including mineral absorption, arachidonic acid metabolism, PPAR signaling pathway, endocrine and other factor-regulated calcium reabsorptions. This result suggests that metabolism is somehow changed during the procession of tumorigenesis in PDAC, supporting the notion that interplay between evolving PDAC and whole body metabolism contributes to disease pathogenesis [29].

Previously, Ye et al. [30] predicted the regulation mechanism of pancreatic cancer by bioinformatics and found that 21 lncRNAs related to lncRNA-miRNA-mRNA pathway were differentially expressed in pancreatic cancer, suggesting that lncRNA dysfunction is a critical step in the progression in PDAC. Similar to our study, Müller and colleagues [31] found that 43 lncRNAs were differentially expressed in six pancreatic cancer tissues and five control tissues by next-generation sequencing. Wang et al. [32] found that lncRNA HOTTIP-005, XLOC_006390 and RP-567G11.1 were increased as shown by microarray, and they may prove to be diagnostic biomarkers for pancreatic cancer. Several other lncRNAs (lncRNA-ATB, LOC389641 and PVT1) have been proved to have diagnostic and prognostic values in PDAC [33-35]. All these studies and ours suggest that lncRNAs have potential diagnostic and prognostic values in PDAC. However, few lncRNAs have been functionally characterized, although thousands of lncRNAs are aberrantly expressed as shown by sequencing or microarray methods. Further study is needed to investigate the mechanism underlying the carcinogenesis of PDAC.

In summary, our study demonstrated that 4364 lncRNAs and 4862 related mRNAs were significantly dysregulated in PDAC tissues versus adjacent non-cancerous tissues. GO and pathway analyses showed that up-regulated lncRNAs that related to several pathways, especially TGF-beta signaling pathway, were associated with carcinogenesis, and phagosome and cell cycle were closely correlated with PDAC progression. Interestingly, almost all down-regulated lncRNAs were associated with metabolism, such as mineral absorption, arachidonic acid metabolism, PPAR signaling pathway, endocrine and other factor-regulated calcium reabsorption. In addition, we found that RP11-263F15.1 was significantly over-expressed in PDAC tissues, and that RP11-263F15.1 was associated with histologic differentiation. KM analysis showed that a higher expression of RP11-263F15.1 was associated with a shorter OS. However, RP11-263F15.1 was not an independent indictor of prognosis for patients with PDAC. Cumulatively, these findings indicate that RP11-263F15.1 plays an important role in the initiation and progression of PDAC and may prove to be a potential diagnostic or prognostic biomarker for PDAC.