Results: The 30-day and 90-day mortality rates were 3.2% and 6.2%, respectively. Postoperative complications developed in 149 patients (36.7%), mainly included arrhythmia, transfusion, pulmonary infection, bronchopleural fistula and acute respiratory distress syndrome. During the follow-up, 189 patients experienced a relapse, consisting of 51 patients with local recurrence and 138 with distant recurrence. The median survival time was 24.4 months and the overall 1-year, 3-year and 5-year survival rates were 82.7%, 50.9% and 32.5%, respectively. Moreover, the overall 1-year, 3-year, 5-year survival rates for patients with non-small cell lung cancer (NSCLC) were 84.1%, 52.1% and 32.5%, respectively and patients with small cell lung cancer (SCLC) were 56.1%, 38.5% and 28.8%, respectively. Among NSCLCs, adenocarcinomas had a worse prognosis than squamous carcinomas. Compared to right pneumonectomy, patients with left pneumonectomy had a better prognosis. Multivariable analysis revealed ICU stay, disease stage, nodal stage and adjuvant chemotherapy were all significant predictors of overall survival (OS).

Conclusions: Pneumonectomy is still a valuable and effective treatment option for patients with advanced lung cancer. Surgeons should be more cautious when patients had higher disease stage, adenocarcinoma and right-side lung cancer. Neoadjuvant chemotherapy did not affect the prognosis. Pneumonectomy could also achieve acceptable survival outcomes in well-selected SCLC patients.

Lung cancer maintains the leading cause of cancer-related death in the world and surgical resection could offer a potential cure for patients with resectable malignant lung neoplasms [1, 2]. Although sleeve lobectomy, with less reduction of respiratory function and a lower mortality rate, would not compromise oncological results in well-selected patients with central lung cancer, pneumonectomy is still necessary when complete resection could not be achieved by other surgical procedures [3, 4].

Pneumonectomy is considered as a high-risk procedure, which is reported with higher morbidity and mortality [5, 6]. In recent years, with the improvement of anesthesia, surgical technique and perioperative nursing, the operative mortality relevant to pneumonectomy has significantly reduced [7, 8]. However, there still remains considerate debate whether pneumonectomy itself is a risk factor for postoperative complications or long-term outcome [9-12]. Furthermore, it is still unclear whether induction therapy improves the prognosis of patients underwent pneumonectomy and the efficacy of pneumonectomy for resectable small cell lung cancer (SCLC). Therefore, it is important for surgeons to have a comprehensive understanding of pneumonectomy and avoid surgical risks. Based on this, we analyzed the clinical records of 406 consecutive patients underwent pneumonectomy to identify postoperative complications and the risk factors influencing long-term survival.

Kaplan-Meier survival curves for relapse-free survival (A) and overall survival (B) according to patients underwent pneumonectomy in our series. 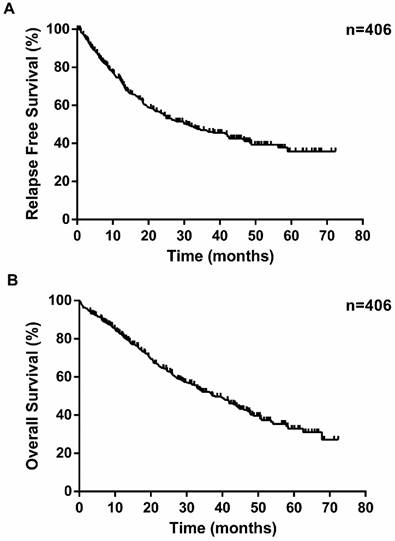 The median survival time was 24.4 months. During the follow-up, 189 patients experienced a relapse, consisting of 51 patients with local recurrence and 138 with distant recurrence (Table 2). The overall 1-year, 3-year and 5-year survival rates were 82.7%, 50.9% and 32.5%, respectively (Figure 1). Unsurprisingly, with the progression of disease stage or nodal staging, both relapse-free survival (RFS) and overall survival (OS) would be worse (Log-rank P <0.0001). There was no difference in RFS (Log-rank P =0.0995) between small cell lung cancer (SCLC) and non-small cell lung cancer (NSCLC), but NSCLC revealed better overall survival (Log-rank P =0.0181). The overall 1-year, 3-year, 5-year survival rates for patients with NSCLC were 84.1%, 52.1% and 32.5%, respectively, and patients with SCLC were 56.1%, 38.5% and 28.8%, respectively. Among NSCLCs, adenocarcinomas had a worse prognosis than squamous carcinomas. As to laterality, compared to right pneumonectomy, patients with left pneumonectomy had a better prognosis (OS: Log-rank P =0.0082, RFS: Log-rank P =0.3274). Neoadjuvant chemotherapy did not make sense for improving outcomes of patients underwent pneumonectomy.

Univariable Analyses for RFS and OS in patients underwent pneumonectomy.

Kaplan-Meier survival curves for relapse-free survival according to different classification criteria in our series. 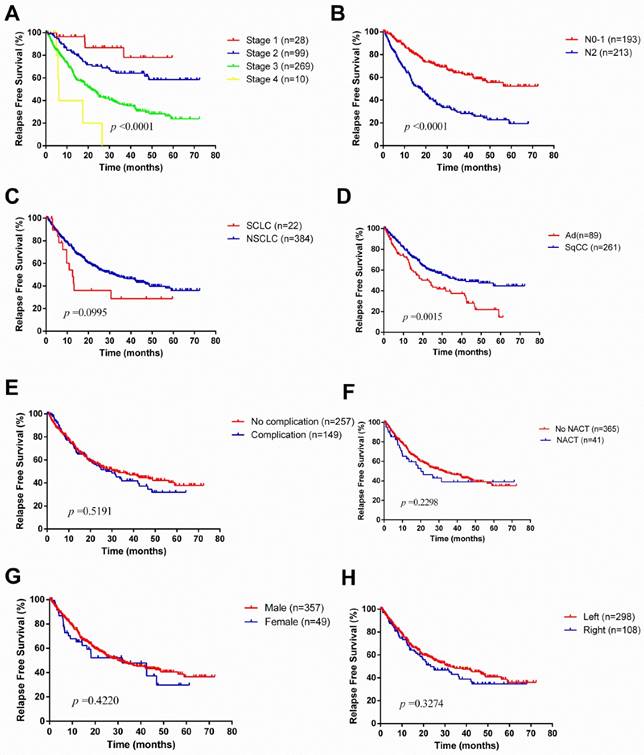 In recent years, pneumonectomy has been increasingly considered as a high-risk procedure, especially when lesser resections such as sleeve resection have shown no compromise of oncologic results and improved postoperative life quality. However, pneumonectomy is inevitable in terms of extension of lung cancer or technical and anatomical considerations [13, 14]. Actually, pneumonectomy is associated with relatively higher postoperative morbidity and mortality rates and worse 5-year overall survival when compared with limited resections or even with mere received chemoradiotherapy [4].

Our results revealed reasonable overall morbidity and mortality rates, as well as long-term survival for pneumonectomy. Postoperative complications developed in 149 patients (36.7%) and the 30-day and 90-day mortality rates were 3.2% and 6.2%, respectively. The early-death rate is basically in line with previous studies reported by several authors [13, 15-17]. Furthermore, the overall 1-year, 3-year and 5-year survival rates were 82.7%, 50.9% and 32.5%, respectively. Our results were comparable to that of prior studies [13, 15-17]. In multivariable analysis, we detected ICU stay, disease stage, nodal stage and adjuvant chemotherapy as significant predictors of OS, whereas older age, BPF, adenocarcinoma cell type, right pneumonectomy, male sex and tumor size were also significant predictors of OS in other reports [15, 18].

Kaplan-Meier survival curves for overall survival according to different classification criteria in our series. 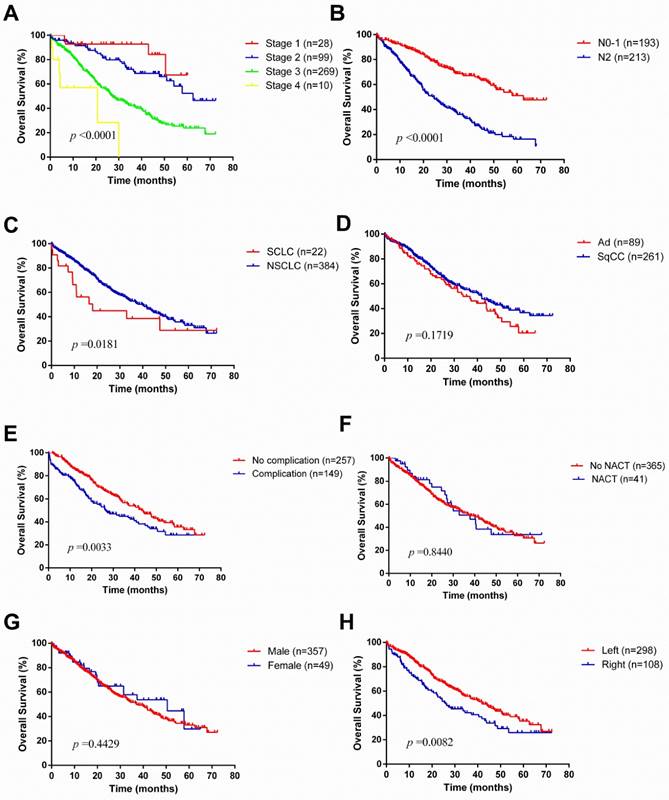 SCLC is considered as a systemic disease in terms of its rapid progress. The standard treatment for patients with SCLC is chemoradiotherapy, even for those diagnosed with limited-stage disease [27]. The role of surgical resection is still controversial in patients with SCLC. In our series, a total of 22 patients with SCLC were treated with pneumonectomy, which pathological stage was almost all stage Ⅲ disease (19 of 22). There was no difference in RFS (Log-rank P =0.0995) between SCLC and NSCLC, but NSCLC revealed better overall survival (Log-rank P =0.0181). The overall 1-year, 3-year, 5-year survival rates for patients with SCLC were 56.1%, 38.5% and 28.8%, respectively. The 5-year survival rate was similar to what Kawano et al. reported (28.6%) [28], but much lower than what Stish et al. did (37%) [29], due to their patients having relatively early-stage disease (stage Ⅰ SCLC accounts for 56%). Interestingly, the difference still existed whether pneumonectomy was a good option for patients with SCLC. Kawano and colleagues found pneumonectomy (HR 6.177, P =0.00159) acted as a significant independent predictor of an adverse outcome while others reported patients underwent lobectomy/pneumonectomy (HR 1.0, P =0.01) were less likely to experience intrathoracic recurrences [28, 29]. From the current study, we achieved acceptable survival outcomes in well-selected SCLC patients through pneumonectomy, but we could not further analyze the surgical outcomes of different procedures. Multidisciplinary treatment is still needed for patients with SCLC.

There are some limitations of this study. First, thirty patients (6.9%) were lost to follow-up, which would relatively reduce the morbidity and mortality rates. Second, many patients had their induction therapies in their local hospitals and the specific treatments were unknown. Third, as for patients with SCLC, although the acceptable survival outcomes were achieved, whether pneumonectomy acts as a risk factor or an innocent bystander is still unknown. Further study should be taken in the future.

In summary, our finding demonstrated that pneumonectomy is still a valuable and effective treatment option for patients with advanced lung cancer. Surgeons should be more cautious when patients have higher disease stage, adenocarcinoma cell type and right-side lung cancer. Neoadjuvant chemotherapy did not affect the prognosis. Pneumonectomy could also achieve acceptable survival outcomes in well-selected patients with SCLC.

The study was approved by the Institutional Review Board of our hospital and the signed informed consent for surgery was provided. During the period between January 2010 and December 2012, the clinical records of patients who underwent pneumonectomy in our hospital were retrospectively reviewed. All the patients had preoperative assessment to exclude distant metastases, including chest CT scans, abdominal CT or ultrasound examination, brain CT scan and technetium bone scan. Endobronchial ultrasound-guided transbronchial needle aspiration (EBUS-TBNA) or positron emission tomography (PET)-CT scan was also an option for excluding distant metastases. Patients with biopsy-verified distant metastases were also excluded. Chemoradiotherapy was recommended first for patients diagnosed as advanced NSCLC (IIIB or more) or SCLC by preoperative biopsy (needle aspiration or bronchoscopy).

Patients underwent pneumonectomy for completion pneumonectomy, benign diseases or pulmonary metastases of other tumors were all excluded. After the exclusion, a total of 436 patients met the standard. Among these patients, thirty patients were lost to follow-up and finally 406 patients were subjected to the study. Patients with SCLC were treated with pneumonectomy in our study because of the negative preoperative biopsy results. The archives for all patients were reviewed and relevant clinicopathologic data including age, gender, smoking history, surgical treatment, postoperative complications and tumor staging (according to the 7th AJCC TNM staging system [30]) were reviewed as well. All the patients were followed up through out-patient clinic or telephone every 3 months for the first year after surgery, every 6 months for the next 3 years and then annually.

All the clinicopathologic data and distributions of survival were analyzed by SPSS 19.0 software package (SPSS Inc., Chicago, IL) or Prism 5 (Graphpad Software Inc., La Jolla, CA). The curves of relapse-free survival (RFS) and overall survival (OS), as well as their comparisons, were calculated by Kaplan-Meier method and the log-rank test. P <0.05 was considered statistically significant.

Final approval of manuscript: All authors

The authors declare that there is no conflict of interest that could be perceived as prejudicing the impartiality of the research reported.

4. Janet-Vendroux A, Loi M, Bobbio A. et al. Which is the Role of Pneumonectomy in the Era of Parenchymal-Sparing Procedures? Early/Long-Term Survival and Functional Results of a Single-Center Experience. Lung. 2015;193(6):965-973