Activin B Regulates Adhesion, Invasiveness, and Migratory Activities in Oral Cancer: a Potential Biomarker for Metastasis

Activin B, a homodimer of inhibin beta b (INHBB), is a multifunctional cytokine belonging to the transforming growth factor-β (TGF-β) family. However, the molecular functions and clinical relevance of activin B have not been determined in oral cancer. We investigated the critical roles of activin B in oral squamous cell carcinoma (OSCC). We performed quantitative reverse transcriptase-polymerase chain reaction, Western blotting, and immunohistochemistry to study INHBB expression in OSCC-derived cell lines and OSCC clinical samples. The INHBB expression levels were significantly (P < 0.05) overexpressed in OSCCs compared to normal counterparts in vitro and in vivo. Activin B-positivity in OSCC cases was significantly (P < 0.05) correlated with regional lymph node metastasis. The INHBB knockdown (shINHBB) cells promoted cellular adhesion and suppression of cellular invasiveness and migration. After treatment of shINHBB cells with activin B, those activities were restored similar to the shMock cells. In the processes of invasiveness and metastasis, the cells cause epithelial-mesenchymal transition (EMT). TGF-β and its family members are promoters of the EMT process. To investigate whether activin B is related to EMT, we examined the expressions of EMT-related genes and found that INHBB was related closely to EMT. Our results suggested for the first time that activin B indicates tumoral metastasis in OSCCs and might be a useful biomarker for OSCC metastasis.

Oral squamous cell carcinoma (OSCC) is characterized by a high rate of local invasiveness and regional lymph node metastasis [1, 2]. Metastasis of cancer cells is an important factor in mortality. To improve patient prognosis, it is important to elucidate the molecular mechanism of metastasis in OSCC [3, 4].

Among the isoforms of activin, activin A has been reported widely in ovarian, prostate, and breast cancers [10-13]; however, there are a few reports of activin B in cancer research. Although exogenous activin B promotes cellular adhesion, migration, and invasiveness activities in endometrial cancer cells [14, 15], the detailed functions of activin B in OSCCs have not been reported.

The current study found for the first time that activin B is correlated closely with regional lymph node metastasis in OSCCs. Our results indicated that activin B might be a potential therapeutic target for patients with OSCC.

The Ethics Committee of the Graduate School of Medicine, Chiba University approved this study (protocol number, 236), which was conducted according to the tenets of the Declaration of Helsinki. Before participating in our study, all patients provided informed consent.

mRNA and cDNA synthesis extractions were conducted as previously described [23- 25]. Quantitative reverse transcriptase-polymerase chain reaction (qRT-PCR) was performed to evaluate target expression, the protocol of which was previously described [23-25]. The primer sequences were as follows: inhibin beta b (INHBB), 5'-ATCAGCTTCGCCGAGACA-3' (forward) and 5'-GGTTGCCTTCGTTGGAGAT-3' (reverse); and glyceraldehyde-3-phosphate dehydrogenase (GAPDH), 5'-AACATCATCCCTGCCTCTACTGG-3' (forward) and 5'-TTGAAGTCAGAGGAGACCACTG-3' (reverse).

The immunohistochemistry IHC scoring system was used to quantify INHBB protein expression in OSCC clinical samples. IHC and IHC scoring systems were performed as previously described [16, 24-26]. The imaging software IHC Profiler (https://sourceforge.net/projects/ihcprofiler/) was used. The INHBB IHC scores were calculated by combining the proportion of the INHBB stained cells and the staining intensity. The intensity levels of the stained cells were classified on a scale of 0 to 3, with 0 indicating negative, 1 low positive, 2 positive, and 3 high positive. To determine the cutoff points of the INHBB IHC scores for each clinical classification, we analyzed all scores of the 103 patients with OSCC using receiver operating characteristic (ROC) curve analysis.

The adhesion assay was performed as previously described to assess the cellular adhesiveness with shINHBB cell and Mock cells [30]. The numbers of stained adherent cells were observed and counted using the Infinite M200 reader (Tecan, Zürich, Switzerland).

To investigate the effect of INHBB knockdown on cellular migration, the cells were plated in 6-well culture plates in Dulbecco's Modified Eagle Medium (DMEM) containing 10% fetal bovine serum (FBS) and cultured until confluency was reached. The cellular migration assay was performed as previously described [27, 31].

Cellular proliferation was measured by counting the viable cells using CellTiter 96 Aqueous AQueous One Solution Assay (Promega, Madison, WI, USA) using a colorimetric method. Cells (2 × 103 cells/well) were cultured in 96-well plates with DMEM containing 10% FBS for 24 hours; the MTS reagent (3-(4,5-dimethylthiazol-2-yl)-5-(3-carboxymethoxyphenyl)-2-(4-sulfophenyl)-2H-tetrazolium) was added directly to the cells adhering to the plate. The cells were cultured for 2 hours at 37°C and then measured using the Infinite M200 reader at 490-nm absorbance.

To elucidate the effect of activin B, the cells were treated with 50 ng/ml recombinant human activin B protein (R&D Systems, Minneapolis, MN, USA). After incubation for 24 hours, functional assays were performed.

Statistical significance was evaluated using the Mann-Whitney U-test, χ2 test, Fisher's exact test, and Student's t-test. The significance level for two-sided P values was 0.05 for all tests. The data are expressed as the mean ± standard error of the mean (SEM). We also used ROC curves to determine the optimal cutoff points to determine INHBB positivity of the OSCCs or INHBB negativity of the OSCCs in the classified clinical parameters.

Up-regulation of INHBB in OSCC cells 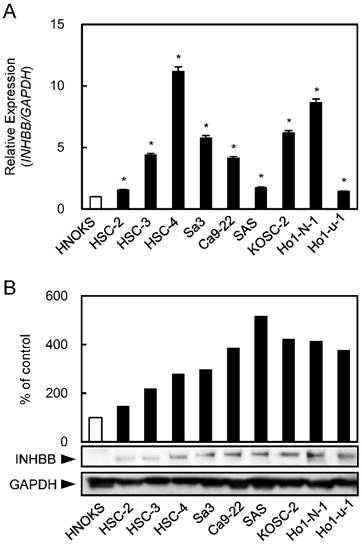 Representative IHC data from activin B in adjacent normal oral tissue and primary OSCC tissue are shown in Fig. 2A and B. The IHC scoring system showed that activin B expression was predominantly up-regulated in the cytosol of the OSCC tissue. However, almost negative immunostaining was seen in normal tissues. The activin B IHC scores in normal oral tissues ranged from 26.0 to 80.0 (median, 55.1) and in the OSCCs from 71.0 to 209.0 (median, 126.1). Activin B IHC scores in OSCCs were significantly (P < 0.05) greater than in normal oral tissues (Fig. 2C). The area under the curve of the ROC curve analysis was 0.71 (71%), and the cutoff value was 101.3 in the analysis of the regional lymph node metastasis (Fig. 2D).

Evaluation of INHBB expression in primary OSCCs. Representative IHC results of activin B in normal oral tissues (A) and primary OSCCs (B). Original magnification, ×200. Scale bars, 50 μm. (C) The status of activin B protein expression in primary OSCCs (n=103) and normal counterparts. Activin B IHC scores for normal oral tissues and OSCCs range from 26.0 to 80.0 (median, 55.1) and 71.0 to 209.0 (median, 126.1), respectively. Activin B protein expression levels in OSCCs are significantly higher than in normal oral tissues (*P < 0.05, Student's t-test). (D) The area under the curve (AUC) of the ROC curve analysis is 0.71, and the cutoff value is 101.3 for the regional lymph node metastasis (P < 0.05). 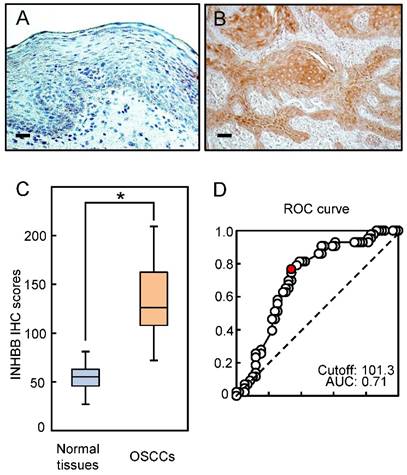 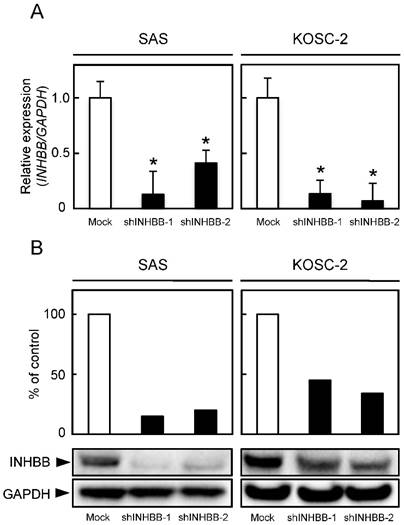 Metastasis of cancer cells is the most important factor that makes treatment difficult [33, 34]. During metastasis, EMT is involved in the acquisition by cancer cells of metastatic and invasive abilities [35-37]. TGF-β and its family members promote EMT [38], which is a transformation characterized by disappearance of epithelial markers and up-regulation of mesenchymal markers [39]. No study has reported that activin B controls EMT-related genes in OSCC. To investigate the effect of activin B on EMT-related genes, expression levels and localization were observed by Western blotting and immunofluorescence. After treatment with activin B, E-cadherin and Zo-1 protein expression of shINHBB cells in SAS cells were down-regulated compared to untreated cells. Furthermore, the protein expression levels of the mesenchymal markers of EMT including Snail were up-regulated (Fig. 6A). Brightfield and immunofluorescence images of shINHBB cells were treated with/without activin B. The shINHBB cells treated with activin B lost E-cadherin on the cell membrane seen by immunofluorescence (Fig. 6B). These results suggested that activin B, which promotes cellular adhesion and invasiveness, undergoes EMT. 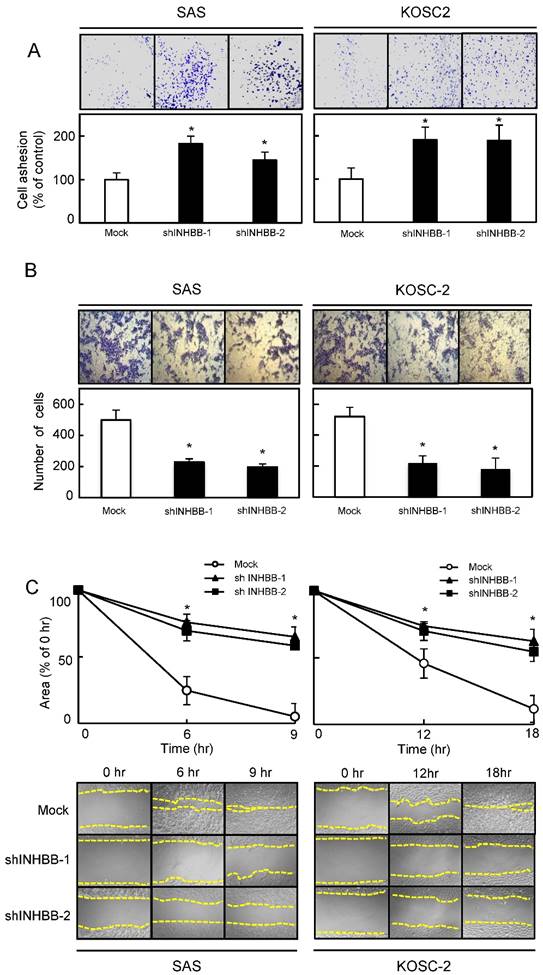 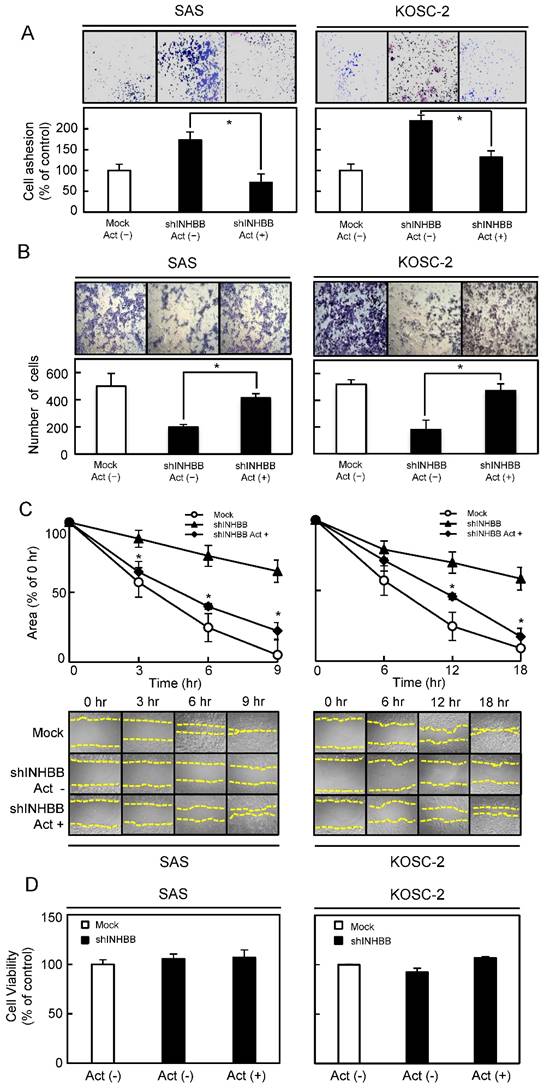 The TGF-β family, including activins, promotes EMT [41-44]. Furthermore, metastatic cancer cells are related closely to EMT, characterized by down-regulation of E-cadherin and Zo-1 [45-48], which are controlled by transcription factors, such as Snail [49-52]. We speculated that cellular behaviors associated with activin B, such as adhesion, invasiveness, and migration, are modulated by EMT. Consistent with our hypothesis, the current data showed higher expression of E-cadherin and Zo-1 in activin B knockdown cells (Fig. 6).

In conclusion, activin B is highly expressed in OSCC and provides new insight into a highly metastatic phenotype by controlling the expression of EMT-related genes. Further studies are needed, but the current data suggested that activin B plays an important role in cellular adhesion and invasiveness in OSCC. Activin B might be a potential therapeutic target for OSCC.

We thank Ms. Lynda C. Charters for editing this manuscript. 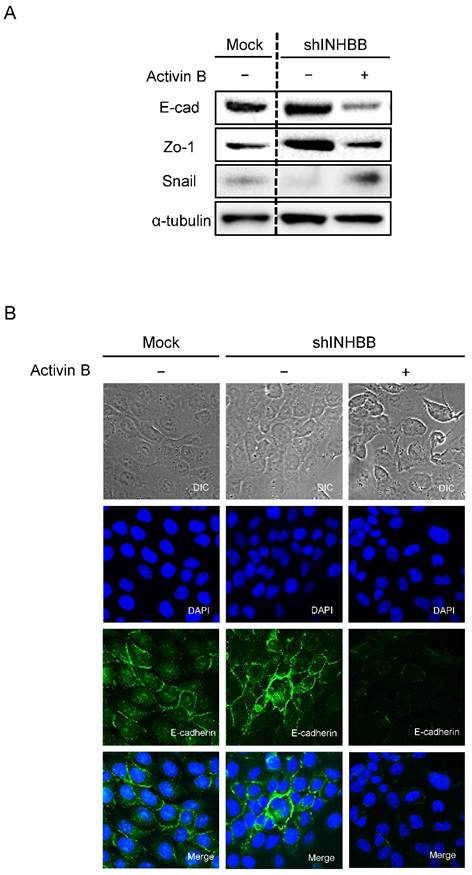 Correlation between INHBB expression and clinical classification in OSCCs.

The authors declare that they have no competing interests related to this study.

6. Xia Y, Schneyer AL. The biology of activin: recent advances in structure, regulation and function. The Journal of endocrinology. 2009;202:1-12

9. Munz B, Tretter YP, Hertel M, Engelhardt F, Alzheimer C, Werner S. The roles of activins in repair processes of the skin and the brain. Molecular and cellular endocrinology. 2001;180:169-77

34. Binmadi NO, Basile JR. Perineural invasion in oral squamous cell carcinoma: a discussion of significance and review of the literature. Oral oncology. 2011;47:1005-10

50. Bonavida B, Baritaki S. Inhibition of Epithelial-to-Mesenchymal Transition (EMT) in Cancer by Nitric Oxide: Pivotal Roles of Nitrosylation of NF-kappaB, YY1 and Snail. Forum on immunopathological diseases and therapeutics. 2012;3:125-33

52. Castro Alves C, Rosivatz E, Schott C, Hollweck R, Becker I, Sarbia M. et al. Slug is overexpressed in gastric carcinomas and may act synergistically with SIP1 and Snail in the down-regulation of E-cadherin. The Journal of pathology. 2007;211:507-15