Background: Some researchers have suggested that vitamin K enhances the antitumor effect of sorafenib for hepatocellular carcinoma (HCC) in vitro and in vivo. In this study, we examined the clinical impact of vitamin K dosing for sorafenib treatment.

Methods: Twenty-nine out of 65 patients treated with sorafenib for HCC were simultaneously dosed with vitamin K. We retrospectively investigated progression-free survival (PFS) and overall survival (OS) in the vitamin K-dosed group and sorafenib alone group. We also examined the changes in serum des-γ-carboxy prothrombin (DCP) levels, which vitamin K is involved with.

Conclusions: To the best of our knowledge, this is the first clinical report showing enhanced antitumor action of sorafenib by vitamin K. Our clinical findings suggest that vitamin K may have the synergistic effect by suppressing production of DCP, a tumor growth and angiogenesis factor.

Sorafenib, a multikinase inhibitor, is a molecular-targeting anti-cancer agent that inhibits the serine-threonine kinase Raf and the tyrosine kinase activity of vascular endothelial growth factor (VEGF) receptors, leading to suppression of cancer cell proliferation and tumor angiogenesis [4,5]. However, the anti-cancer effect of sorafenib is limited despite its frequent adverse events. Llovet et al. reported that median overall survival (OS) was 10.7 months in the sorafenib group and 7.9 months in the placebo group in a clinical study of HCC patients in Europe, America and Australia [6]. Cheng et al. reported that median OS was 6.5 months in sorafenib-treated patients and 4.2 months in control patients in a clinical trial in the Asia-Pacific region [7]. These studies showed that the median OS in sorafenib-treated HCC patients was prolonged by a few months. Thus, more efficient anticancer agents or modified sorafenib therapies are desired.

On the other hand, Wei et al. reported that a combination of vitamin K and sorafenib strongly induced growth inhibition and apoptosis of HCC cells due to inhibition of the Raf/mitogen-activated protein kinase kinase/Phospho-extracellular signal regulated kinase. They showed marked tumor growth suppression of transplanted HCC in rats treated with vitamin K plus sorafenib compared with rats treated with sorafenib alone or vitamin K alone [16]. Carr et al. suggested that the c-Met-PI3K-Akt signaling pathway mediates inhibitory c-Raf phosphorylation that may induce the synergistic action of vitamin K and sorafenib [17]. A report from another group also showed that sorafenib plus vitamin K treatment markedly inhibited migration and proliferation of HCC cells in vitro [18].

Vitamin K supplementation is believed to sustain bone mineral density and to prevent osteoporotic fracture [19,20]. Therefore, in Japan, vitamin K is often administered to cirrhotic patients as a precaution against osteoporosis. We have observed some cases of simultaneous sorafenib and vitamin K dosing. In this study, we retrospectively examined the clinical impact of vitamin K dosing on sorafenib treatment for hepatocellular carcinoma.

We investigated all 65 patients who underwent sorafenib treatment with HCC stages of Barcelona Clinic Liver Cancer (BCLC)-B or BCLC-C in the Osaka General Medical Center from May 29, 2009 until May 31, 2016 [21,22]. The patients had had no indication for surgical operation, transarterial embolization (TACE) or radio-frequency ablation. Forty-one patients (63%) with advanced stage (BCLC-C) were treated with sorafenib according to the EASL-EORTC clinical practice guidelines: Management of hepatocellular carcinoma [22]. Additional 24 patients (37%) with intermediate stage (BCLB-B) who had been given a TACE failure status were also treated with sorafenib. TACE failure status was defined as more than two consecutive incomplete necrosis results (more than 50% of the tumor stain remaining) observed within the treated tumors by response-evaluation computed tomography (CT) 4 weeks after TACE or more than two consecutive appearances of a new lesion (recurrence) observed in the liver by response-evaluation CT 4 weeks after TACE [24]. Based on our sorafenib dosing criteria, an initial dose of sorafenib was given at 800 mg daily, whereas 400 mg was administered to patients who were older than 80 years, weighed less than 50 kg or had Child-Pugh status B to avoid adverse events due to overdosing. Forty-three patients (66%) were given an initial dose of 800 mg of sorafenib, while 22 patients (34%) received an initial dose of 400 mg of sorafenib. Forty-eight patients (74%) had Eastern Cooperative Oncology Group (ECOG) performance status (PS) 0, 11 (17%) had PS 1, and 6 (9%) had PS 2 before sorafenib administration. Regarding Child-Pugh status at baseline, 54 (83%) had Child-Pugh A, and 11 (17%) had Child-Pugh B. Twenty-one (32%) showed macroscopic vascular invasion, and 25 (38%) had extrahepatic spread (lymph node: 9, bone: 6, lung: 6, adrenal gland: 4, spleen: 1, peritoneum: 1). Twenty-nine (45%) out of the 65 patients had simultaneous dosing of sorafenib and vitamin K (Gla-kay, Eizai Co., Ltd., Tokyo, Japan). Vitamin K dosing began in 5 patients prior to the start of sorafenib treatment, began concurrently in 21 patients, and began after sorafenib treatment in 3 patients.

In all cases, radiologic tumor evaluation was performed according to the modified Response Evaluation Criteria in Solid Tumors (RECIST) [25] by dynamic contrast-enhanced CT or EOB magnetic resonance imaging, within 2 weeks before the start of sorafenib dosing, and was repeated every 4 to 8 weeks after the start of treatment until tumor progression. The radiologic review was independently performed by a radiologist and hepatologists. Progression-free survival (PFS) was defined as the time from the start of sorafenib dosing to radiologic progression. OS was assessed from the date of sorafenib dosing until the date of death from any cause. The disease control rate was shown as the percentage of patients with complete response, partial response or stable disease that was maintained for at least 4 weeks. Safety was assessed using Common Terminology Criteria for adverse events version 3.0.

The serum DCP levels were tested by ECLIA (Wako Pure Chemical Industries, Ltd., Osaka, Japan). We examined the changes in serum DCP levels before and 8 weeks after the beginning of treatment.

All patients provided written informed consent for the study before the start of sorafenib dosing. The study was approved by the ethics committee of Osaka General Medical Center and complied with the Declaration of Helsinki and local laws.

The Kaplan-Meier method and the log-rank test were used to analyze the impact of vitamin K dosing on PFS and OS of sorafenib-treated patients. The Cox proportional-hazards model was used to assess the interaction between PFS or OS and characteristics at baseline. The Chi-square test, Fisher's exact test, Student's t test and Mann-Whitney U test were used for analysis of baseline characteristics, disease control rates and adverse events. To evaluate the change in serum DCP levels, the paired t-test was performed after logarithmic transformation.

Baseline Characteristics of the Patients 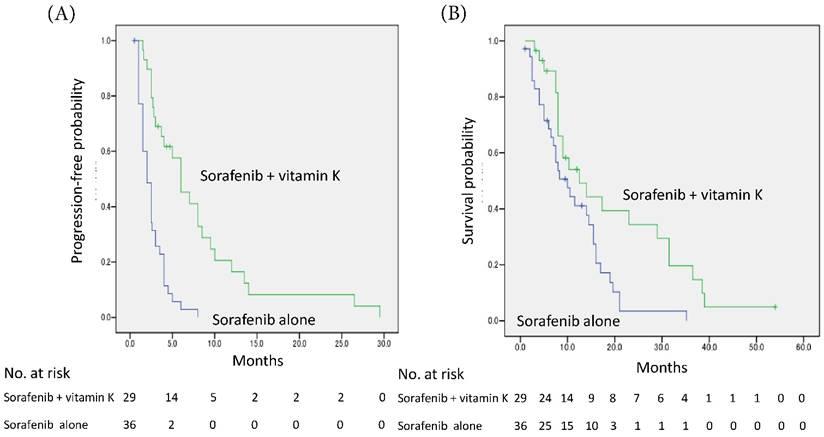 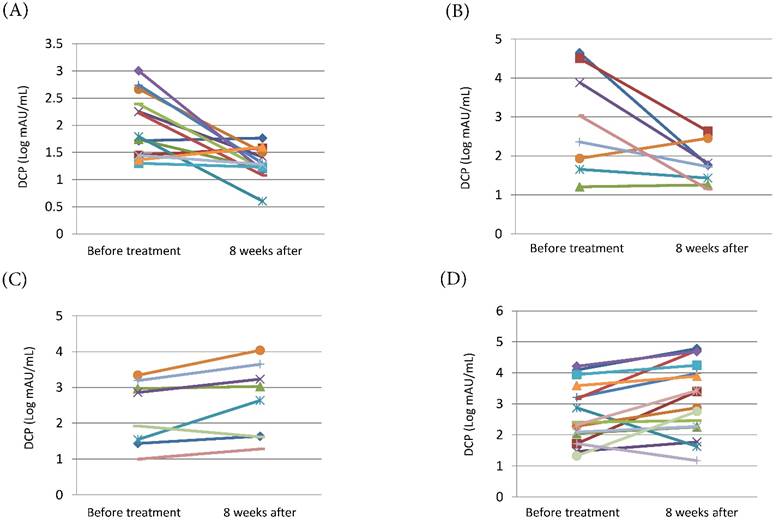 a Drug-related adverse events that occurred in at least 5% of patients in either group were listed. They were assessed using Common Terminology Criteria for adverse events version 3.0.

We have some reports suggesting that DCP, which is one of the popular tumor markers for HCC, is an autologous growth factor for HCC [26,27] and a paracrine factor for tumor angiogenesis [28-30]. DCP released from tumor cells is shown to bind to Met on the tumor cells and kinase insert domain receptor on vascular endothelial cells, resulting in tumor cell proliferation and endothelial cell proliferation and migration. Additionally, Ma et al. showed that vitamin K inhibits the growth of hepatocellular carcinoma via a decrease of DCP in vitro [9]. We speculated that the benefit of vitamin K dosing for sorafenib treatment might be associated with DCP levels from tumor cells. We focused on the change of serum DCP levels during anticancer treatment. The serum DCP levels were increased by sorafenib-alone treatment in disease-controlled patients as well as in patients with PD. The paradoxical phenomenon, DCP elevation despite suppressed tumor growth, could be explained as the following. Vitamin K is an essential co-factor in prothrombin production from its precursor, DCP. Because HCC tumor cells possess an impaired vitamin K uptake system, prothrombin production is suppressed due to the lack of vitamin K inside tumor cells, followed by accumulation and release of DCP [31]. Thus, DCP can be a tumor marker for HCC. Sorafenib deteriorates tumor angiogenesis and puts tumor cells in an ischemic state [4,5]. Murata et al. showed that hypoxia further decreases the vitamin K uptake of tumor cells and leads to more accumulation and release of DCP [32]. However, augmented DCP release could provide an advantage for tumor cells to survive because DCP works as a tumor growth factor [26,27] and an angiogenesis enhancing factor [28-30]. Sorafenib's antitumor action may be limited by elevation of DCP.

In contrast, we found a remarkable decline in the serum DCP levels both in patients with disease-controlled patients and in patients with PD of the sorafenib + vitamin K group. According to in vitro study by Murata et al., high-dose vitamin K administration elevates the vitamin K concentration inside tumor cells in a dose-dependent manner and suppresses DCP accumulation and release [31]. Vitamin K dosing could enhance the antitumor action of sorafenib by suppressing DCP levels.

Approval of the final version of the manuscript: All authors

13. Mizuta T, Ozaki I, Eguchi Y. et al. The effect of menatetrenone, a vitamin K2 analog, on disease recurrence and survival in patients with hepatocellular carcinoma after curative treatment: a pilot study. Cancer. 2006;106:867-872

23. European Association for the Study of the Liver European Organization for Research and Treatment of Cancer. EASL-EORTC Clinical Practice Guidelines: Management of hepatocellular carcinoma. J Hepatol. 2012;56:908-943