Results: Expression of GRK3 was lower in tumor than in non-tumor tissues from 4 out of 8 patients. In the training set, the H-score of tumoral GRK3 staining was much lower than that in adjacent non-tumor liver tissues. In addition, GRK3 was associated with tumor-node-metastasis (TNM) stage and serum α-fetoprotein (AFP) level. Patients with high GRK3 tumors were found to carry significantly better tumor-specific survival, compared with those with low GRK3 ones. Furthermore, GRK3 was identified as one of independent predictors of favorable prognosis, adjusted for clinicopathologic parameters. Importantly, these results were further validated in the independent validation set. In all patients and 7 out of 10 subgroups, GRK3 was also revealed to be prognostic.

Conclusions: GRK3 is down-regulated and predicts good prognosis in HCC. Therefore, GRK3 might function as a tumor suppressor gene in HCC.

It is well known that hepatocellular carcinoma (HCC) is highly prevalent worldwide, especially in B- and C-type hepatitis virus endemic areas [1]. In addition, the overall prognosis of HCC remains poor, although some improved results have been achieved by curative interventions, such as hepatic resection and liver transplantation in highly selected patients [2,3]. Therefore, factors affecting prognosis of HCC were long of interest. Except for conventional clinical and pathologic variables that were previously reported and summarized, such as portal vein thrombosis, tumor size, alpha-fetoprotein (AFP), Child-Pugh class and tumor-node-metastasis (TNM) stage [4-6], prognostic values of molecules that are involved in initiation and progression of HCC, including genes/proteins, microRNAs (miRNAs) and long non-coding RNAs (lncRNAs) have been gradually found [7-9]. However, novel promising candidates need to be further explored.

G protein-coupled receptor kinase 3 (GRK3) is one of seven isoforms of GRKs that phosphorylate and desensitize agonist-bound G protein-coupled receptors (GPCRs) [10,11]. It was previously demonstrated that GRK3 plays important roles in the nerve system [12-14]. Interestingly, data concerning GRK3 seem to be controversial in different kinds of human malignant tumors [15-18]. In glioblastoma, GRK3 was found to be frequently decreased and to reduce the trophic effect of endothelial cells on tumor cells [15]. Recent results from breast cancer also suggested its negative impact on migration, invasion, and metastasis [16]. However, Li et al. reported that GRK3 not only maintained survival and proliferation of metastatic cells, but also promoted growth, neuroendocrine differentiation and metastasis in prostate cancer [17,18]. Therefore, the biological effects of GRK3 might be tissue-type specific. This phenomenon might influence the impact of the molecule on clinical features and long-term outcomes in patients with different malignancies. Thus far, expression, clinicopathologic and prognostic significances of GRK3 in cancer remain unknown.

The present study was designed to address these issues, based on Chinese patients with HCC.

Totally, 8 and 395 patients with HCC who underwent hepatectomy were enrolled, respectively. Paired tumor and adjacent non-tumor liver tissues were obtained. Of 8 patients whose samples were collected for Western blotting, 6 were male and 2 were female. Ages ranged from 16 to 60 years (median: 53 years). On the other hand, 395 individuals whose samples for immunohistochemistry were divided into two independent sets, i.e. training (2010-2012, n=164) and validation (2005-2009, n=231) ones. Among the patients, 334 (84.6%) were male and 61 (15.4%) were female, with the median age of 52 years (range: 17-79 years). The tested clinicopathologic parameters were age, sex, hepatitis B surface antigen (HBsAg), cirrhosis, tumor size, vascular invasion, Edmondson-Steiner grade [19], TNM stage and AFP level. Tumor size was first measured in preoperative imaging and proven during operation. Vascular invasion (VI) and Edmondson-Steiner grade were determined by post-surgical histological examinations. Patient clinicopathologic features are shown in Table 1. The project was approved by the Institutional Ethics Committee and the informed consent of patients was obtained.

Associations between GRK3 expression and clinicopathologic features in HCC

TMAs were constructed based on formalin-fixed paraffin-embedded blocks of HCC. Firstly, representtative areas within tumor and adjacent non-tumor liver tissues were re-identified. Then, cores with a diameter of 1.5 mm were sampled. Finally, TMAs were constructed using a manual tissue arrayer (Beecher Instruments, Sun Prairie, WI). 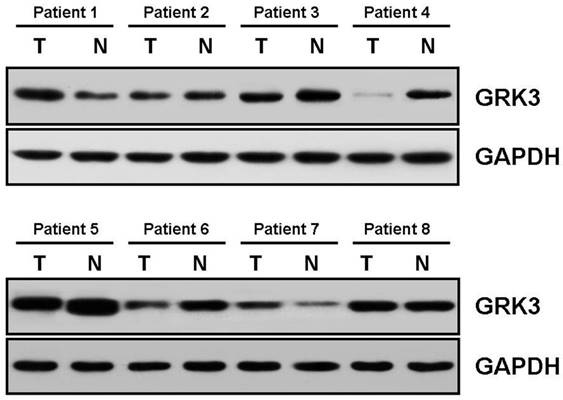 The same primary antibody for GRK3 was used for staining. In the first, 4 µm-thick sections were mounted, deparaffinized in xylene and rehydrated in graded ethanol. Antigen retrieval was carried out in an autoclave for 5 min. Subsequently, slides were incubated with hydrogen peroxide (3%) for 10 min to block endogenous peroxidase. Slides were then incubated overnight with the primary antibody (1: 100) at 4ºC. Non-immune serum at the same dilution was applied as the negative control. After washing in phosphate buffered saline (PBS), the horseradish peroxidase (HRP)-labeled secondary antibody was added for an incubation of 30 min. Diaminobenzidine was adopted as a chromogen. Finally, slides were counterstained using hematoxylin.

Two senior pathologists who had no prior information of clinicopathologic and follow-up data (Z.Y. L. and W.X. Z.) independently evaluated the slides, and discussed for the consensus when they were divergent. The positive signal was defined as brown coloration in tumor and non-tumor liver cells. The H-score [20], considering both positive cell proportion and staining intensity and being widely adopted in immunostaining studies [21,22], was used as the staining evaluation criteria. The H-score values with the largest youden index (YI) for survival and clinicopathologic variables within corresponding receiver operating characteristic (ROC) curves were selected as cut-off ones, as previously reported [23].

Expression of GRK3 in Patients of HCC (Detected by Western Blotting)

Western blotting showed that GRK3 was degressively expressed in 4 out of 8 tumor tissues (patients 3, 4, 5 and 6), in contrast to corresponding non-tumor ones (Fig. 1). Besides, its expression in tumors was higher than and equal to that in normal tissues in 2 (1 and 7) and 2 (2 and 8) patients, respecttively. The corresponding hematoxylin and eosin (H&E) staining images of tumor and non-tumor tissues of these patients were shown to provide histological evidence in Fig. S1.

GRK3 Expression and Associations with Clinicopathologic Features in HCC

Prognostic Significance of GRK3 in HCC

Prognostic analysis for tumor-specific survival in training set of HCC

Prognostic analysis for tumor-specific survival in validation set of HCC

GRK3, an isoform of GRKs that has direct catalytic effects for phosphorylation and desensitization of GPCRs [10,11], was proven to play pivotal roles in tissues, such as the nerve system [12-14]. Thus far, reports about GRK3 in human malignancies remains to be limited, but inconsistent, even opposite [15-18]. It was shown that GRK3 was negatively associated with aggressive behaviors in glioblastoma and breast cancer [15,16], whereas this gene was also established to be involved in survival and proliferation of metastatic cells, as well as tumor growth, neuroendocrine differentiation and metastasis, in prostate cancer [17,18]. Therefore, GRK3 might be a protein that functions tissue-type specifically. Besides, expression and clinicopathologic significances of GRK3 in cancer have not been explored. The present study was designed to address the issues. In the first, authors found by Western blotting that GRK3 expression was low in tumor tissues, in contrast to adjacent non-tumor liver tissues, in half (4 out of 8) pairs of samples (Fig. 1), preliminarily indicating its frequent down-regulated expression in HCC. The subsequent finding based on HCC patients in a relatively recent time period as the training set is that H-score of GRK3 staining was much lower in tumor tissues than in non-tumor tissues (Fig. 2A-C). In addition, H-scores of GRK3 staining were negatively correlated with tumor size, VI, TNM stage and serum AFP level (Table 1), variables that were linked to progression of HCC [24-27], under cut-off values derived from ROC curves (Fig. S2). Besides, these observations were strongly supported by similar ones in the validation set. In particular, the negative relationship between GRK3 expression and TNM stage as well as serum AFP level was found in both sets. No doubt TNM stage largely reflects tumor progression, while AFP were long demonstrated to contribute to malignant phenotypes, for example, growth, host immune inhibition and metastasis, through multiple mechanisms in hepatocarcinogenesis [28-30]. Therefore, GRK3 seems to be a negative marker of HCC progression. Moreover, whether AFP is involved in GRK3-induced alterations in phenotypes and corresponding molecules of HCC might also be of interest. In the future, relative mechanistic investigations on GRK3 are quite expected.

On the other hand, the prognostic value of GRK3 in cancer remains unknown. In this work, the authors first showed in the training set that patients with high GRK3 expression had significantly good survival in univariate analysis (Fig. 3A, Table 2), while GRK3 remained to be significantly prognostic in multivariate Cox regression analysis (Table 2), adjusted for conventional clinicopathologic variables. Similar with results for clinicopathologic significance, its prognostic implication was also confirmed in the validation set (Fig. 3B, Table 3). Moreover, GRK3 expression was also revealed to distinguish good and poor survival in all patients and 7 out of 10 subsets of HCC in univariate analysis (Fig. 4), and independently predicted prognosis in all patients and 5 subsets based on multivariate Cox regression test (Table 4). All these data suggest that GRK3 might have a broad potential to serve as a promising biomarker for favorable prognosis in many groups of HCC. In view of the negative correlation between GRK3 expression and aggressive parameters, especially late TNM stage and high AFP level, the survival benefit of GRK3-high HCC might be easily understood. Thus, we here add a novel candidate of molecular markers in outcome prediction of HCC [7-9].

Collectively, our data establish that GRK3 is down-regulated and is predictive for favorable prognosis in HCC. Therefore, this gene might function as a tumor suppressor gene (TSG) in HCC.

The authors declare no competing interests.