Results: There were comparable baseline characteristics between the two groups. Tumor-specific immune responses increased significantly after gp96 vaccination. gp96 vaccination plus chemotherapy was well tolerated and there were no gp96-related serious adverse events. Patients who received gp96 vaccination had improved DFS compared with those who did not [p = 0.045; hazard ratio (HR): 0.47; 95% confidence interval (CI): 0.23-0.96]. The 2-year OS rates were 81.9% and 67.9% for the gp96 vaccination and chemotherapy alone group, respectively (p = 0.123; HR: 0.42; 95% CI: 0.15-1.24).

Gastric cancer (GC) is a challenging health burden, especially for regions that have high incidence rates, such as East Asia. In China, GC is the second leading cause of cancer-related deaths according to the latest population-based cancer registry [1]. The prognosis of GC is dismal, with 5-year survival rates of ~20% [2], although multidisciplinary therapeutic strategies have been developed, such as adjuvant chemotherapy and perioperative chemoradiotherapy. These approaches have the potential to cause toxicity and do not eradicate cancer cells thoroughly. The residual cancer cells that escape immune surveillance can revive and lead to metastasis, recurrence and ultimately death. Therefore, additional interventions that are highly specific to tumor cells with low toxicity are urgently needed.

Immunotherapy of patients with autologous tumor-derived heat shock proteins (HSPs) is an appealing method for specifically targeting tumor cells because of the potential to minimize adverse treatment effects [3]. HSPs, notably glycoprotein (gp)96, chaperone a wide array of proteins including tumor-associated antigens, constituting the HSP-peptide complexes [4, 5]. These gp96-peptide complexes interact with antigen-presenting cells (APCs) via specific receptors such as CD91 [6], C-type lectin family scavenger receptor A [7] and Toll-like receptor 2 [8]. The complexes trigger the maturation and activation of APCs as well as expression and release of various cytokines and chemokines such as interleukin (IL)-6, IL-12 and granulocyte-macrophage colony-stimulating factor [9]. This results in a robust CD4+ and CD8+ T-cell antitumor immune response and possible elimination of micrometastasis [10].

Heat shock protein peptide complex 96 can be easily purified from solid tumor and has been safely tested in patients with a variety of solid tumors [11-14]. In a Phase III trial, no treatment-related grade 3 or 4 adverse events were observed among patients treated with adjuvant HSP vaccine obtained after nephrectomy [3]. Despite no differential recurrence-free survival between patients who received HSP vaccine and those who did not, patients with early disease tended to have longer recurrence-free survival [3]. In another Phase III study among patients with melanoma, the survival benefits were confirmed for patients with M1a and M1b stage disease who received 10 dose gp96 immunizations and no significant toxicity was observed [15]. These preliminary studies indicated that gp96 vaccination could benefit some patients, without causing serious adverse events.

The present Phase II trial is believed to be the first to evaluate autologous gp96 vaccine in addition to chemotherapy in an adjuvant setting in patients with resected GC. Our results have demonstrated the feasibility and clinical efficacy of autologous tumor-derived gp96 vaccination in locally advanced GC.

This was a two-arm, open-label, nonrandomized, controlled Phase II trial. The study flowchart is shown in Fig. 1. The primary endpoints were disease-free survival (DFS) and adverse events. The secondary endpoints were overall survival (OS) and changes in tumor-specific T cells. The study protocol was approved by the Ethics Committee of People's Liberation Army General Hospital and was conducted in accordance with the Helsinki Declaration and the good clinical practice guidelines.

Flow chart of the study 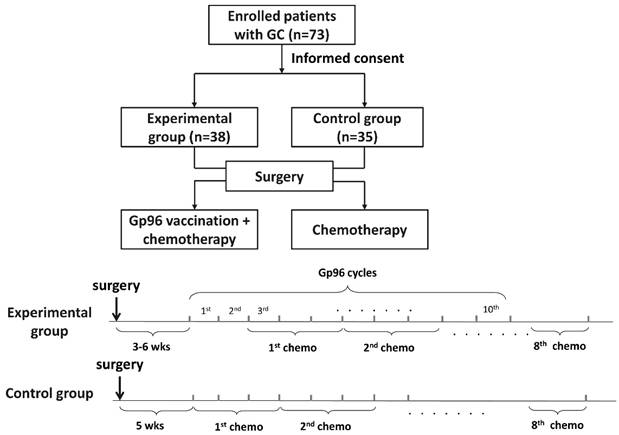 After an informed discussion, patients made their decision to receive chemotherapy alone or in combination with gp6 vaccination, and they were classified as the control and experimental group, respectively. Patients in both groups received D2 radical gastrectomy performed by experienced surgeons (PZ and CL) who conduct >100 gastrectomies annually in accordance with the guidelines [16]. In the experimental group, patients postoperatively received autologous gp96 vaccination and basal treatment for GC, while the control group only received basal treatment. Autologous gp96 vaccination started between 3 and 6 weeks after surgery and 25 μg gp96 vaccine was administrated subcutaneously once weekly until vaccine supply depletion or disease progression. Basal treatment consisted of adjuvant S-1/oxaliplatin (SOX) regimen for eight cycles starting at Week 5 after surgery, as previously described [17]. S-1 was administered orally twice daily for a total of 80 mg/m2 from Day 1 to 14, and oxaliplatin was given as an intravenous infusion of 130 mg/m2 on Day 1. This regimen was repeated every 3 weeks.

Patients were monitored for potential adverse events (investigator determined or patient reported) according to the National Cancer Institute Common Toxicity Criteria for Adverse Events (version 3.0). Patients were followed up every 3 months for 2 years postoperatively and every 6 months from year 3 postoperatively. The primary endpoint was DFS, which was defined as the period from completion of surgery to disease recurrence, progression or death, whichever occurred first.

A three-step purification method for gp96 vaccine preparation was used, as described previously [18]. About 10 g of macroscopically non-necrotic tumor was surgically resected and shipped on dry ice to Cure&Sure Biotech (Shenzhen, China), and processed under current good manufacturing practice conditions. After assurance of product quality, including sterility and endotoxin testing, 25-μg aliquots of gp96 vaccine were transported at -20°C to the administration center, where they were stored at -80°C.

The effects of vaccination were measured in patients by IFN-γ release ELISPOT assay using peripheral blood mononuclear cells (PBMCs) obtained before first adjuvant treatment and after the last vaccination or last cycle of chemotherapy in the control group. T-cell reactivity in PBMCs was evaluated in response to autologous tumor lysates.

We enrolled 73 patients with GC from October 2012 to December 2015. Thirty-eight and 35 patients who were diagnosed as Clinical Stage III were allocated to the experimental and control group, respectively. The baseline characteristics of all participants are summarized in Table 1. There was no significant difference between the two groups with regard to clinicopathological variables such as age, gender, body mass index, type of gastrectomy, and pathological stage. In the experimental group, who received autologous gp96 vaccine and basal treatment, 32 (84.2%) patients received 10 doses of vaccine, and the other six (15.8%) patients received six doses of vaccine.

Baseline demographic and clinical characteristics of the patients

To evaluate the tumor-specific responses of lymphocytes to autologous tumor lysate, we performed IFN-γ ELISPOT assays. Among 33 patients with paired pre- and post-vaccination blood samples, significantly enhanced IFN-γ release in response to autologous tumor antigens was observed (p < 0.001; Fig. 2A). In contrast, among those patients with no vaccination, there was no change in initiation of T-lymphocyte activation (Fig. 2B). These results indicate that gp96 vaccination induces tumor-specific T lymphocytes.

Adverse effects according to the NCI-CTCAE 3.0 criteria

To the best of our knowledge, the present study is the first to demonstrate the safety of adjuvant, tumor-derived, patient-specific autologous gp96 vaccination in patients with GC. This kind of active immunotherapy elicited tumor-specific T-cell responses, which have the potential to improve DFS of patients with less aggressive GC who have received radical D2 gastrectomy.

In principle, immunogenicity of gp96 is attributed to its ability to activate both the adaptive and innate immune responses: (i) serving as a chaperone for peptides, including antigenic tumor peptides, to activate antigen-specific adaptive immunity; and (ii) serving as an adjuvant on APCs independently of any associated peptide, to promote innate immune responses [19]. Preclinical experiments in rodent models and clinical trials in various cancers have shown the excellent safety profile and potential antitumor efficacy of gp96 vaccination [3, 15, 20].

IFN-γ ELISPOT assays were performed to determine the tumor-specific response pre- and post-vaccination in the experimental group (A), and pre- and post-chemotherapy in the control group (B).

Kaplan-Meier curves of DFS (A) and OS (B) for enrolled participants.

Consistent with those results, our study demonstrated that addition of gp96 vaccination in adjuvant settings to chemotherapy did not increase adverse events compared with chemotherapy alone. The adverse events shown in Table 2 were more likely related to chemotherapy rather than gp96 vaccination [21]. The most commonly reported gp96-related adverse events in previous trials, such as injection-site erythema and induration, were not observed [3]. Our survival analysis also corresponded well with previous findings that gp96 vaccination was mainly effective in patients with early disease stage and limited tumor burden. Our results revealed that patients with locally advanced disease treated with radical gastrectomy would benefit from gp96 vaccination, with improved DFS. We speculate that compared with patients with advanced cancer, those with less-aggressive disease receiving radical gastrectomy have a less-immunosuppressive environment. There is evidence of a correlation between tumor burden and elevated level of regulatory T cells in the circulation, which in turn acts to suppress immunity [22, 23]. Less immunosuppression facilitates gp96-induced, tumor-specific T-cell response. Although the significant difference in DFS between the two groups did not translate into different OS rates (Fig. 3B), the 2-year OS rate (81.9%) was still better than the previously reported 67.4% from a population-based database [24]. Insufficient follow-up time might account for the negative OS comparison between our two groups.

Most of our patients (84.2%) received 10 doses of gp96 vaccination rather than the minimal four doses in earlier studies [13, 25, 26]. Administration of four doses of gp96 was based on animal experiments that suggested that a minimum threshold of four immunizations is necessary for protection from tumor growth [20, 27]. Animal-based data might not be suitable for translation to patients in clinical settings. In a clinical trial of gp96 vaccination in melanoma patients, as the number of immunizations increased, there was a trend towards improved survival [15]. Thus, multiple independent injections of autologous gp96 vaccine might be obligatory to obtain a benefit for the patient. This might partly explain why gp96-induced, tumor-specific immune responses did not translate into positive clinical results in previous studies [14]. gp96 vaccine is prepared from surgically removed tumor tissue, which is a limited source and an obstacle to vaccine preparation. Development of alternative methods of gp96 isolation to increase the overall yield is a possible solution to the shortage of autologous tumor material [28, 29]. With sufficient vaccines, the optimal courses of gp96 therapy could be identified in future studies.

There are seven steps in the cancer-immunity cycle: release of cancer cell antigens; cancer antigen presentation; T cell priming and activation; trafficking of T cells to tumors; infiltration of T cells into tumors; recognition of cancer cells by T cells; and killing of cancer cells [30]. To maximize the efficacy of gp96 vaccination, it is reasonable to combine vaccination with other regimens. Administration of gp96 vaccine with immunomodulating monoclonal antibody such as anti-CTLA-4 and anti-PD-1/PD-L1 [31] might elicit a T-cell response and protect the T cells from immunosuppression. Combination of gp96 vaccination with antiangiogenic molecules that inhibit angiogenesis [32] could enhance T-cell trafficking and infiltration into the tumor bed. Future experiments are warranted to investigate the toxicity and efficacy of gp96-combination regimens.

Several limitations to our study need to be considered when interpreting the data. First, despite being the first Phase II trial of gp96 vaccine in GC, the current study had a small number of participants, and the non-randomization and open-label nature of the study could have been associated with inherent and inevitable biases. To provide a higher level of evidence, we are conducting a Phase III randomized controlled study. Second, the insufficient follow-up time of some patients might have compromised the statistical power of the study. Third, although there was an increased immune response after vaccination, analysis of immunocytes phenotype was not available.

Our results demonstrated that the combination of chemotherapy and autologous gp96 vaccination was well-tolerated, and showed potential for prevention of GC recurrence, especially in patients with locally advanced disease who have received radical gastrectomy. The study was designed as a prospective Phase II study, and treatment decisions were fully compliant with patient choice, better reflecting the practical clinical situation. The results indicate that autologous gp96 vaccination could provide an individual-specific strategy for the treatment of GC patients. Large randomized controlled trials are warranted to verify the long-term clinical benefit of gp96 vaccination in patients with GC.

4. Binder RJ, Srivastava PK. Peptides chaperoned by heat-shock proteins are a necessary and sufficient source of antigen in the cross-priming of CD8+ T cells. Nat Immunol. 2005;6:593-599