Background: Hypoxia was a common feature for accelerating tumor metastasis by both inducting epithelial-mesenchymal transition (EMT) of tumor cells and polarization of tumor-associated macrophages (TAMs). The association and roles between hypoxia, EMT and TAMs in the biological behavior of gastric cancer (GC) for the time being recurrence is unclear.

Material and methods: hypoixa by expression of hypoxia-inducible factor-1 alpha (HIF-1α), polarized functional status of infiltrated TAMs by immunohistochemical staining of CD68 and CD163, and the expression of E-cadherin as EMT property had been evaluated in 236 patients consecutive with histologically confirmed GC. Clinical significance was assessed for all these patients.

Conclusion: HIF-1α is an unfavorable indicator for prognosis, may promote tumor progression through the induction of EMT and establishment of a pro-tumor immunosuppressive microenvironment. Further investigation into the therapeutic effects of blocking hypoxia is possible a potential strategy for GC treatment.

Cancer incidence and mortality is increasing in China. It was documented 4292,000 new cancer cases and 2814,000 cancer death in 2015, and gastric cancer (GC) is the second leading cause of cancer-related death [1]. In spite of the progress in the surgical treatment and chemotherapy, the outcome of GC patients was still poor due to tumor relapse and metastasis [2-4]. Hypoxia is well recognized as a common feature of malignant tumors and plays an important role in therapeutic resistance, recurrence and metastasis [5-8]. It regulates the biological behaviors of both tumor cells and infiltrated immune cells [9-13], including induction of epithelial-to-mesenchymal transition (EMT) of cancer cell, activation and polarization of tumor-associated macrophages (TAMs). Despite of recent studies, the association and roles between hypoxia, EMT and TAMs and the biological behavior of GC remain largely unknown.

Hypoxia-inducible factor-1 alpha (HIF-1α), the key transcriptional regulator activated by hypoxia, is correlated to both overall and disease-free survivals in GC after gastrectomy. The over-expression of HIF-1α was found to be a useful independent prognostic bio-marker [14,15]. Based on our previously study, high infiltration of TAMs was related to aggressive behavior, and an independent poor prognostic factor for GC [16]. In pancreatic cancer, expression of HIF-1α was significantly correlated with Chemical Chemokines 2 (CCL2) at the tissue level, and CCL2, a classical chemokine that can effectively recruit monocytes/macrophages to tumor sites, was related to patient prognosis [17].

As hypoxia plays an important role both in EMT and TAMs, it may have a close relationship with tumorigenesis of GC. In our study, we hypothesize a close relation between EMT and TAMs related to hypoxia. High infiltration of TAMs induced by HIF-1α in tumor microenvironment might facilitate the progression of EMT, which is associated with the recurrence and poor prognosis of GC. The clinicopathological features of GC, risk factors to predict recurrence and prognosis were also analyzed.

A total of 236 consecutive gastric cancer tumor specimens with histological confirmed were collected from the Department of General surgery, Drum Tower Hospital and the 101th Hospital of PLA between 2007 and 2009. 150 male and 86 female were included in this study with age ranging from 20 to 84 years. Patients with preoperative anti-cancer therapy, distant metastasis, and who lost follow-up were all excluded from this study. All samples were pathologically evaluated by two independent gastrointestinal pathologists based on WHO criteria [18]. None of these cases received any preoperative chemotherapy or radiation therapy.

This study was approved by the clinical research ethics committees of both hospitals, and complied with the Declaration of Helsinki. Signed informed consent was taken from all studies participants or relatives.

The evaluation of the indicator expression was independently assessed, respectively, by two experienced pathologists who were blinded to the clinical data. TAMs density identified by CD68 and CD163 expression was estimated (per mm2) under a light microscope (Carl Zeiss Axio Scope. A1 microscope) at high-power fields (HPFs, 400×) in 5 fields per case. The mean number of positive cells in each case was determined. Low density was defined as the number of positive cells smaller than the average; otherwise considered as high density.

The staining results of HIF-1α and E-cadherin were scored semiquantitatively as follow. The percentage of immunoreactive cells was scored on a scale of 0 to 4 from no staining as 0, 1 to 10% of cells stained as score 1, 11 to 50% as 2, 51 to 80% as 3, and 81 to 100% as 4. The staining intensities were graded from 0 as negative, to 1 as weak, 2 as moderate, and 3 as strong, respectively. The immunohistochemical score (IHS) was finally obtained by calculating the product of the staining intensity and the positive cell percentage. Patents with a score of 0-5 were regarded as low expression, and those with equal or more than 6 were considered as high expression.

The correlation between HIF-1α, CD68, CD163 and E-cadherin and clinicopathological features was analyzed by the chi-square test. The Spear-man's rank correlation coefficient was used for analyzing the association of CD68, CD163 and E-cadherin expression levels with HIF-1α expression levels. Overall survival (OS) and disease-specific survival (DSS) were the designated endpoints. The definition of OS was the interval between surgery and last visit or death of any causes. As for DSS, cancer-related deaths were counted for the estimation of the disease-specific survival whereas other deaths uncorrelated to gastric cancer were censored. Survival curves were estimated using the Kaplan-Meier method, and differences in survival distributions were evaluated by the log-rank test. For multivariate analysis, the prognostic factors were analyzed using Cox's proportional hazard model. P-values <0.05 were considered statistically significant. All the data were analyzed by SPSS software, version 17.0 (SPSS Inc., Chicago, IL, USA).

The clinicopathologic features of gastric cancer patients and their correlation with the expression of HIF-1α, CD68 and CD163 were described in Table 1. For CD68 and CD163 IHC staining, immunoreactivity was observed primarily in the cytoplasm and membrane of tumor cells, while majority gastric mucosal tissues showed negative or weak immunoreactivity with CD44. High and low expressions of the above-mentioned proteins, according to typical immunohistochemical staining patterns, in gastric cancer and para-cancer normal tissues were shown in Figure 1.

Of the 236 total cases, high expression of HIF-1α was observed in the cytoplasm of tumor cells in 138 cases (58.5%). The positive rate of HIF-1α expression in GC tissues with recurrence was 70.1% (61/87), significantly higher (P<0.05) than that without recurrence 51.7% (77/149). Patients with larger tumor size, advanced TNM stage, positive vascular invasion, deeper invasion and positive of LN metastasis also demonstrated with higher HIF-1α expression. There was no correlation between HIF-1α and other pathological parameters. High expressions of CD68 and CD163, detected in 50.8% (120/236) and 54.4% (129/236) cases of GC, respectively, were closely related to the aggressive behaviors, such as advanced TNM stage, nodal metastasis, lymphovascular invasion and so on. The expression of TAMs markers for patients with recurrence was obviously higher (P=0.001) than that without recurrence.

Association among hypoxia, EMT property and infiltration of TAMs

The ending time for follow-up was January 31, 2016. All the cases were followed up every three months during the first two years post-discharge and every six months thereafter. The follow-up period after surgery was ranging from 20 to 84 months. When the follow-up was over, 98 patients were alive including 86 cases without recurrence and additional 12 with tumor-relapse, while the remaining 138 were dead (63 died of other diseases without recurrence and 75 deceased due to tumor recurrence).

Survival curves were analyzed by the Kaplan-Meier method and compared using the log-rank test. The disease-specific survival (DSS) and overall survival (OS) rates for patients with GC were 56.6% and 41.5%, respectively. Patients with high expression of HIF-1α have an unfavorable overall and disease-specific survivals compared to those with low expression (P<0.001) (Table 4; Figure 2A-2B). Multivariate Cox analysis revealed that high infiltration of TAMs and loss expression of epithelial protein E-cadherin were also statistically correlated with poor DSS (P<0.05) (Figure 2C-D). All in all, as seen in Table 4, high expression of HIF-1α combined TAMs infiltration were independent prognostic factors for DSS and OS rates (P<0.05).

Detection of levels of HIF-1α, TAMs markers and E-cadherin in GC tissue and adjacent normal tissue by IHC. Strong HIF-1α immunoreactivity was identified in poorly differentiated cancer. Expression of TAMs markers was barely seen in normal tissue but was observed in GC tissue. E-cadherin was strongly positive membrane expression in adjacent normal gastric mucosa, but it was loss expression for most GC tissues. GC=gastric cancer, IHC=immunohistochemistry. 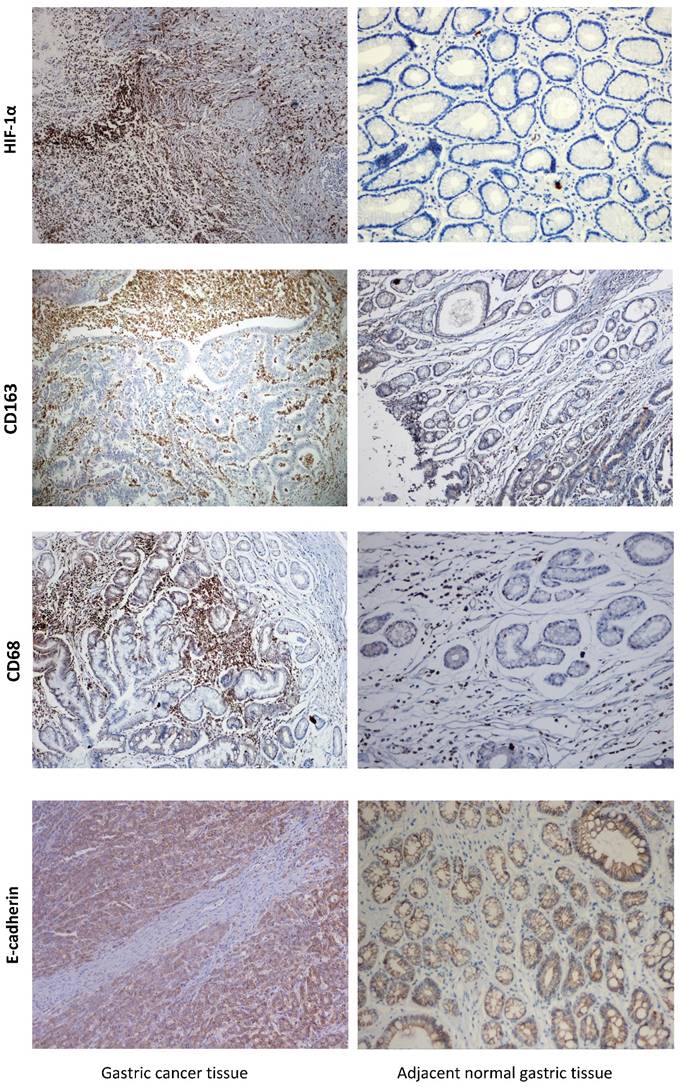 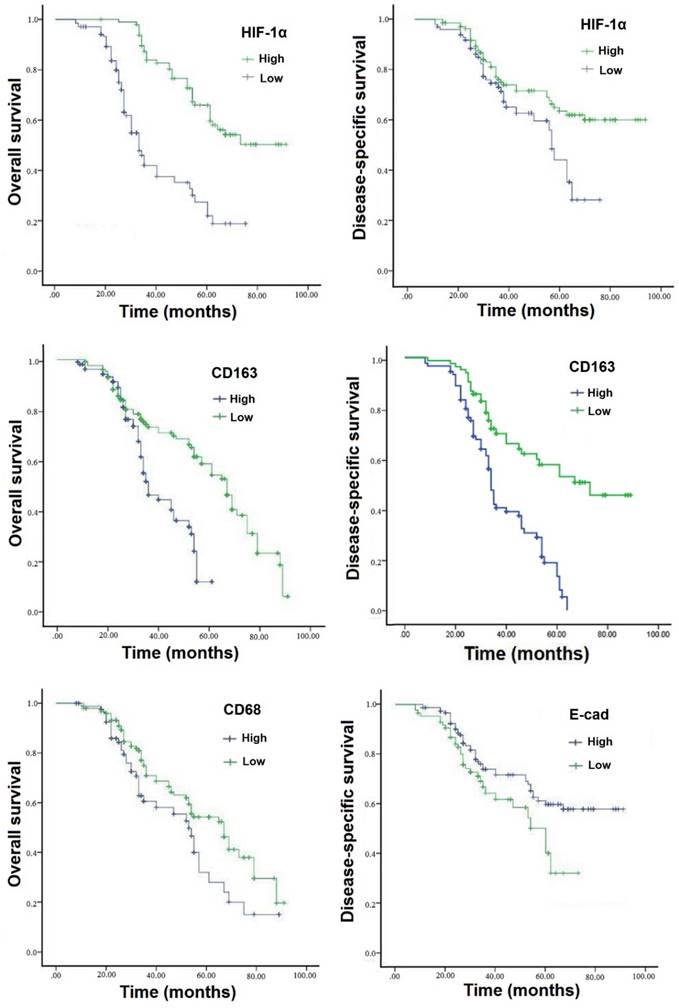 The relationship between expression of HIF-1α, TAMs infiltration and clinicopathological features.

Tumor hypoxia is well recognized in oncology as a key factor resulting in treatment failure and poor prognosis [19-21]. Hypoxia is thought to play a pivotal role in accelerating tumor progression by both inducting EMT of tumor cells and polarization of TAMs [11]. Hypoxia promotes cancer progression by activating relevant gene expressions through hypoxia-inducible factors [20], and HIF-1α is found to be associated with a malignant behavior category, including postoperative prognosis [22].

The results from the present study supported the speculation that high expression of HIF-1α correlates with infiltration of TAMs, and contributes to DSS in GC. We found that hypoxia condition demonstrated as elevated level of HIF-1α was significant associated with infiltration of TAMs and EMT based on the expression of typical markers CD68, CD163 and E-cadherin, respectively. Moreover, both high expression of TAMs indicators and low expression of E-cadherin were significant correlated to high expression of HIF-1α in recurrent GC. High levels of HIF-1α was found to be associated with a malignant behavior category, including larger tumor size, advanced TNM stage, positive vascular invasion, deeper invasion and positive of LN metastasis. In multivariate Cox regression analysis, the results confirmed that the HIF-1α emerged as an independent prognostic factor for GC patients.

In the current study, we also manifested that high expressions of TAMs markers, constant with over-expression of HIF-1α, were related to aggressive features of GC. the results also found a connection between TAMs and EMT in the tissues of GC, including patients with recurrence. Furthermore, multivariate Cox analysis also demonstrated that GC with high-expression of CD163 had a significant correlation with poor survival.

The mechanism by which EMT and TAMs interplay with each other under hypoxia in GC has not been clarified. The EMT plays a crucial role in GC development and progression [23] Accumulating evidence shows that the tumor microenvironment generates and sustains major EMT-triggering pathways for facilitating cancer cell morphological EMT-like changes and obtained the ability of invasion and migration under hypoxic conditions. Besides EMT induction, hypoxia is also thought to play an important role in the phenotypic control and promoting TAMs infiltration into tumor areas [12, 24-26]. In hepatocellular carcinoma, hypoxia can activate HIF-1α/CCL20/IDO axis signaling pathways, which is important for activating macrophages to establish an immunosuppressive tumor microenvironment [11]. Hypoxic TAMs, more likely to be M2-type macrophages, release factors to activate EMT-related signals, such as STAT3 or TGF-beta1, to induction EMT and promoting tumor progression [27-30]. So, HIF-1α originated from cancer cells and tumor-related microenvironment may be one of the key promoters by which TAMs may modulate the progress of EMT in GC.

The results of the current study suggested that hypoxia and TAMs might be potential targets for development of immunotherapy of GC. Targeting HIF-1α or disrupting HIF-1α signal would block hypoxia-induced EMT and aggressive phenotype in cancer cells, with more efficacious and less toxic compounds to inhibit metastasis [31, 32]. Recent study, performed by Wang et al, found that macrophages promoted glioblastoma (GBM) invasion by the CCL4-CCR5 axis, and hypoxia enhanced the interaction between the two types of cells by up-regulating both CCL4 and CCR5 expression[33]; and for breast cancer, Song et al have demonstrated the HA-coated, mannan-conjugated MnO2 particle (Man-HA-MnO2) treatment significantly increased tumor oxygenation and down-regulated HIF-1α in the tumor, primed TAMs toward M1-like phenotype and enhanced chemotherapy response [34]. More intensive researches are needed to elucidate the mechanism by which cancer cells and macrophages interact with each other under hypoxia and verify the potential of hypoxia and TAMs as targets to battle cancer.

In summary, HIF-1α expression, correlated with malignant behavior, was increased in clinical GC specimens, especially in patients with recurrence, and it was associated with infiltration of TAMs, EMT induction and poor disease-specific survival. Therefore, the condition of anoxia and hypoxia could serve as a potential therapeutic strategy for exclusion of TAMs, deduction EMT and improve the prognosis ultimately.

The authors declare no conflicts of interest.