Background: Synovial sarcoma (SyS) is a rare malignancy that typically invades the extremities and occurs predominantly in adolescents. Studies on incidence and survival in SyS that were based on a large population had not been reported yet.

Methods: To evaluate changes in incidence and survival in SyS over three decades, we accessed data on SyS cases in each decade between 1983 and 2012 (1983-1992, 1993-2002, and 2003-2012) from the Surveillance, Epidemiology, and End Results (SEER) database. The survival difference between decades, age groups, sexes, race, pathologic types, sites, stages and socioeconomic status (SES) over three decades were accessed by comparing Kaplan-Meier curves.

Results: We located 2,070 SyS cases in 18 SEER registry regions between 1983 and 2012. Our study demonstrated that the incidence of SyS per 1,000,000 continued to increase from 0.906 to 1.348 to 1.548 in the total population and in most age groups and that the age of incidence peak was 15-29 years in three decades. But, the survival of patients with SyS did not significantly improve throughout the three decades, with 5-year survival rates of 69.4%, 61.1% and 60.5% respectively (p > 0.05). Interestingly, the widening survival gaps among races, sexes, pathological types and various SES over time were observed, with narrowing p values.

Conclusions: This study demonstrated the increasing incidence and unimproved survival rates across three decades in a large sample, indicating the urgency for further development of diagnosis, improving health care providers' awareness of SyS and lead to the development of novel treatments.

Synovial sarcoma (SyS) is an uncommon malignancy that predominately occurs in adolescents and young adults, accounting for 5%-10% of the soft tissue sarcomas [1]. SyS typically originates in the extremities and lower thigh, and traditional treatments for localized SyS include surgical resection with wide margin, radiotherapy, and adjuvant chemotherapy. However, clinical outcome in this disease based on a large sample size had not been published due to its lower incidence. Previous studies mainly consisted of case reports or focused on specific patient groups such as pediatric SyS or SyS of the head and neck [2-6]. Following advances in pathological diagnosis, surgery, chemotherapy, and radiotherapy in SyS, this study aimed to clarify the incidence and survival changes between 1983 and 2012 by accessing data in the Surveillance, Epidemiology, and End Results (SEER) database. In addition, this study compared patient survival in various stratification settings and identified the factors associated with survival.

Data collection and categorized SyS cases across three decades. All data were obtained from the SEER database, maintained by the National Cancer Institute. In this study, we collected SyS incidence data across three decades from the original nine SEER sites and survival data from 18 SEER sites. SyS is histologically defined by the following International Classification of Diseases for Oncology, Third Edition, histology codes for malignant cases: synovial sarcoma, not otherwise specified (NOS) (9040/3), synovial sarcoma, spindle cell (9041/3), synovial sarcoma, epithelioid cell (9042/3), and synovial sarcoma, biphasic (9043/3). Patients were divided into five age groups: 0-14 years, 15-29 years, 30-44 years, 45-59 years, and 60+ years. The tumor sites were categorized into five regions: head and neck, trunk, lung and pleura, extremities, and other. We analyzed patients whose SyS had been diagnosed between1983 and 2012, the period that was divided into three decades (1983-1992, 1993-2002, and 2003-2012). We stratified cases by stage and tumor site for analyzing incidence and by SES (socioeconomic status), race, sex, stage, site, and pathological type for conducting Kaplan-Meier survival analysis. The three SES groups were defined on the basis of the county poverty rate [7-9].

Incidence and survival analysis. The incidence rates of SyS were calculated per 1,000,000 persons. We compared the survival difference by Kaplan-Meier survival analysis with a two-tailed log-rank test. The survival difference between decades, age groups, sexes, race, pathologic types, sites, stages and socioeconomic status (SES) over three decades were accessed by comparing Kaplan-Meier curves.

Cox regression analyses and Spearman rank correlation analyses. Only Whites and Blacks were included in the Cox regression analysis; patients whose tumor origination site was “other” were excluded. In addition, the original high-poverty group and medium-poverty group were redefined as a new “med-high-poverty group.” Ages were divided into five groups, as previously discussed. Spearman rank correlation coefficient was calculated because race was not normally distributed.

Summary incidences of patients diagnosed as having SyS between 1983 and 2012 at the original nine SEER sites. Incidence data were categorized by age, decade, stage, and site. 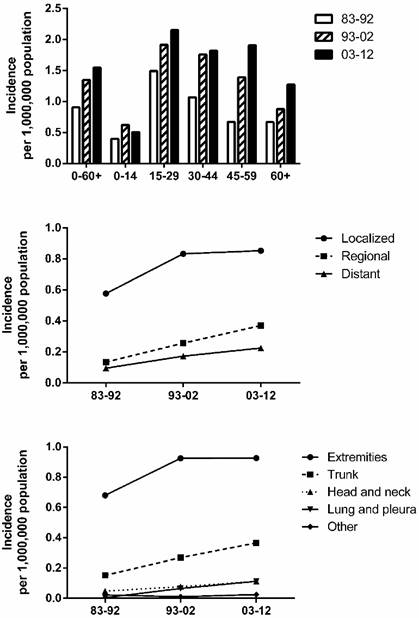 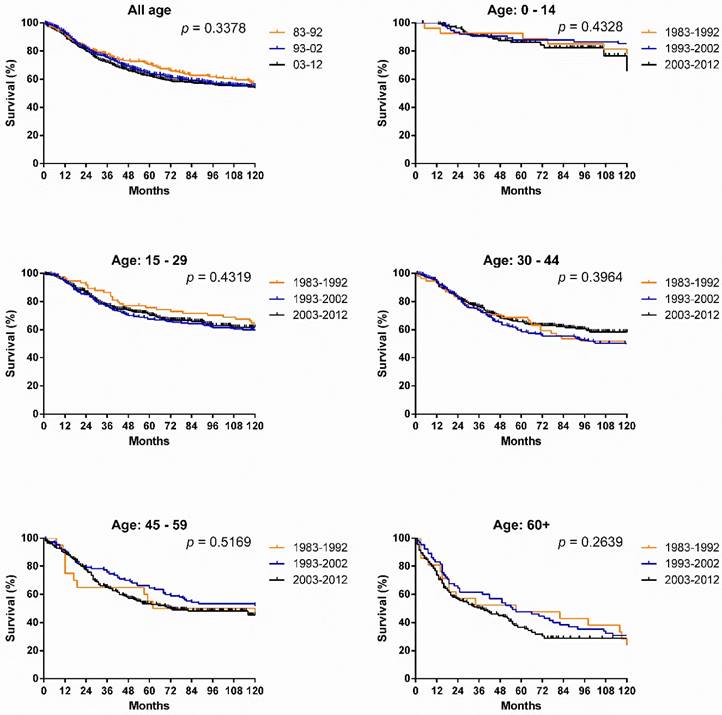 Survival changes in SyS. A total of 2,070 patients with SyS were identified between 1983 and 2012 at 18 registry sites in the SEER database. The median survival of patients with SyS decreased from 249 months to 199 months over the first two decades. As illustrated in Figure 2, survival in patients with SyS did not significantly improve in the total population, with 5-year rates of 69.4%, 61.1% and 60.5% respectively, across the three decades. Similar tendency can be seen in each age group. Significant survival advantage in females was noted across the three decades, and the survival disparities between the sexes continued to widen each decade, with p values decreasing from 0.1389 to 0.0036 to 0.0013 (Fig. 3).

Kaplan-Meier survival analysis for patients with SyS at 18 SEER sites between 1983 and 2012 according to sex and calendar period. 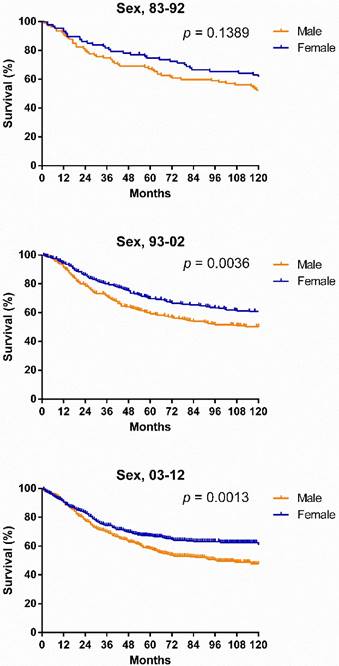 Additionally, sex, age, race, stage, site, and pathological type were significantly associated with overall survival over the three decades according to Cox regression analyses (p < 0.05) (Table 1). Females, with a hazard ratio (HR) of 0.751, were associated with a lower risk of death during the three decades, with males as the reference. In addition, older age (HR = 1.405), Blacks (HR = 1.292), and advanced stage (HR = 2.960) were associated with higher risks across the three decades, with younger age, Whites, and localized stage as references, respectively (Supplementary Table S1). When the data for each decade were analyzed, more variables showed as independent predictors in time.

Summary data for Cox regression analysis of survival in patients with synovial sarcoma in total three decades at 18 SEER sites.

SyS survival in various races and SES groups. Whites had a higher survival rate than did Other, whose survival rate was higher than that of Blacks in the last two decades. Kaplan-Meier survival analysis showed that although no statistically significant differences between races were found, the survival gaps between races widened, with p values narrowing from 0.3162 to 0.0902 to 0.0736. In terms of SES, the longest survival was observed in the low-poverty group, with the shortest survival in the high-poverty group, and more importantly, the survival disparities among three SES groups continued to widen each decade (p = 0.0141) (Fig. 4).

Kaplan-Meier survival analysis according to race and SES for patients with SyS at 18 SEER sites across three decades and in each decade. 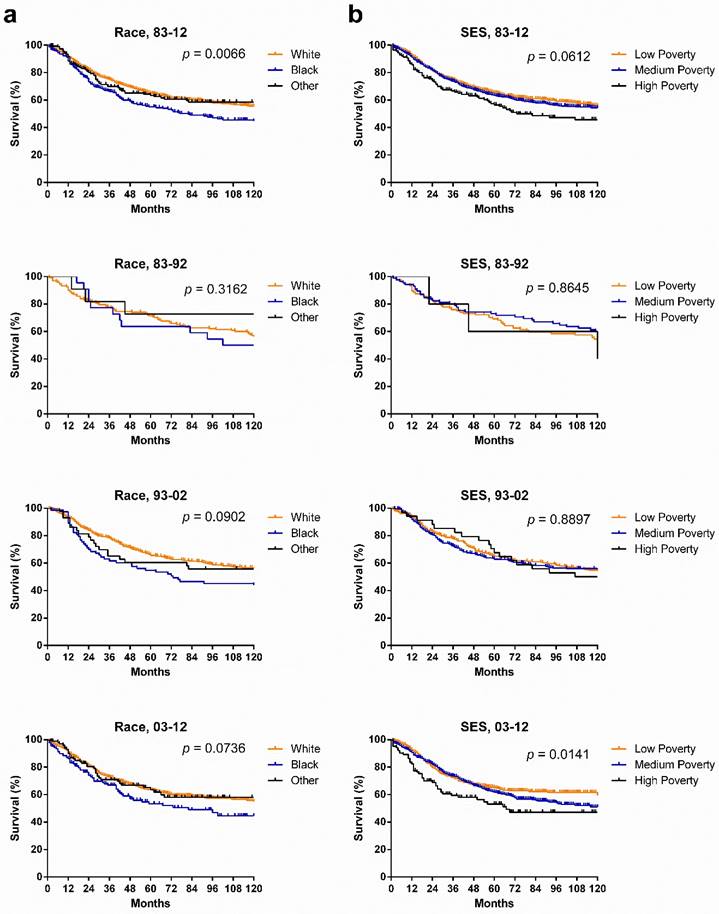 Kaplan-Meier survival analysis according to stage and site for patients with SyS at 18 SEER sites across three decades and in each decade. 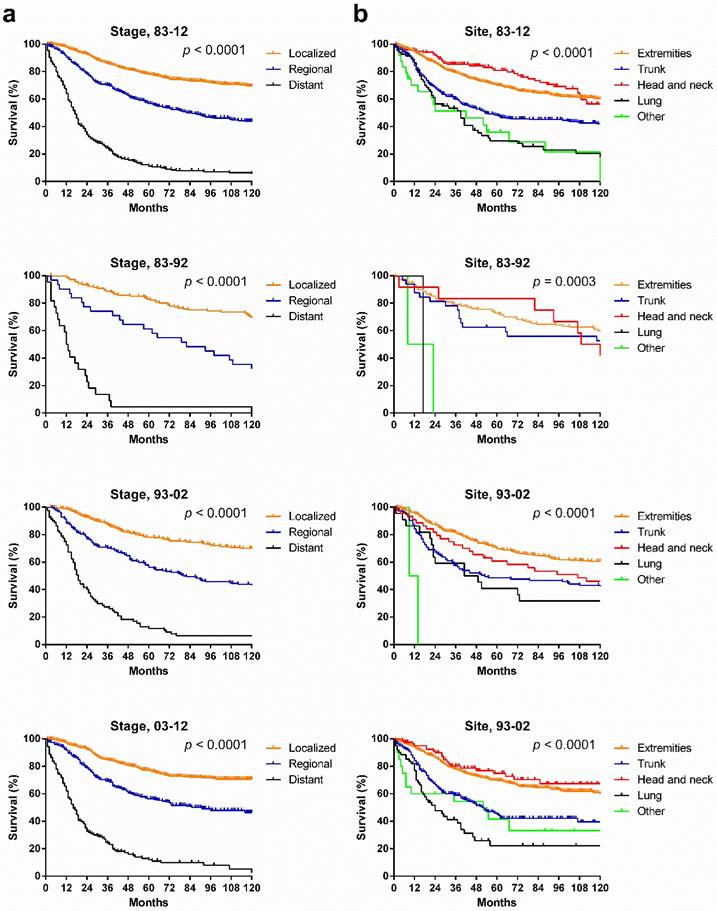 Kaplan-Meier survival analysis according to stage for patients with SyS at 18 SEER sites across three decades.

This is the first study of incidence and survival in SyS based on a large population in the United States to date. We demonstrated the increasing incidence of SyS in the total population and in each age group except for the 0-14 years group in the three decades. However, no survival improvement in SyS was observed in the three decades, indicating the pressing need for the development of novel and effective treatments.

One widely believed cause for SyS is a chromosome abnormality known as t (X; 18) (p11.2; q11.2), resulting in the formation of SS18-SSX fusion oncogenes. It can be seen in more than 90% of SyS cases and therefore is believed to be the cause of SyS [10]. But the real etiological factors, including cell of origin, remain unknown. The peak age of SyS occurrence was 15-29 years, which differed from previous reports, in which the majority of SyS patients were aged 15 to 40 years [11]. The unimproved clinical outcome across the three decades may be partly attributed to the aging patient population. The incidence at each stage or site of origin increased, with robust increase noted in the localized cases and in cases originating in the extremities, respectively. The second most frequent site in each decade was the trunk, differing from previous studies in which the head and neck region was believed to be the second most frequent site [12].

In terms of sex, females showed survival advantage, and the survival gaps between the sexes widened across the three decades, with narrowing p values, suggesting that the biological differences between the sexes may play an increasingly important role in the pathogenesis of SyS. In terms of stage, survival time of localized, regional, and distant cases differed significantly, with the longest survival in localized cases in each decade. However, no significant survival improvement was shown in localized, regional, or distant cases in the three decades combined. Although survival for patients of different races did not significantly differ, the gaps among them widened as illustrated by decreasing p values. Similar results were observed when patients were stratified by SES and significant survival difference among different SES groups was observed in the third decade. 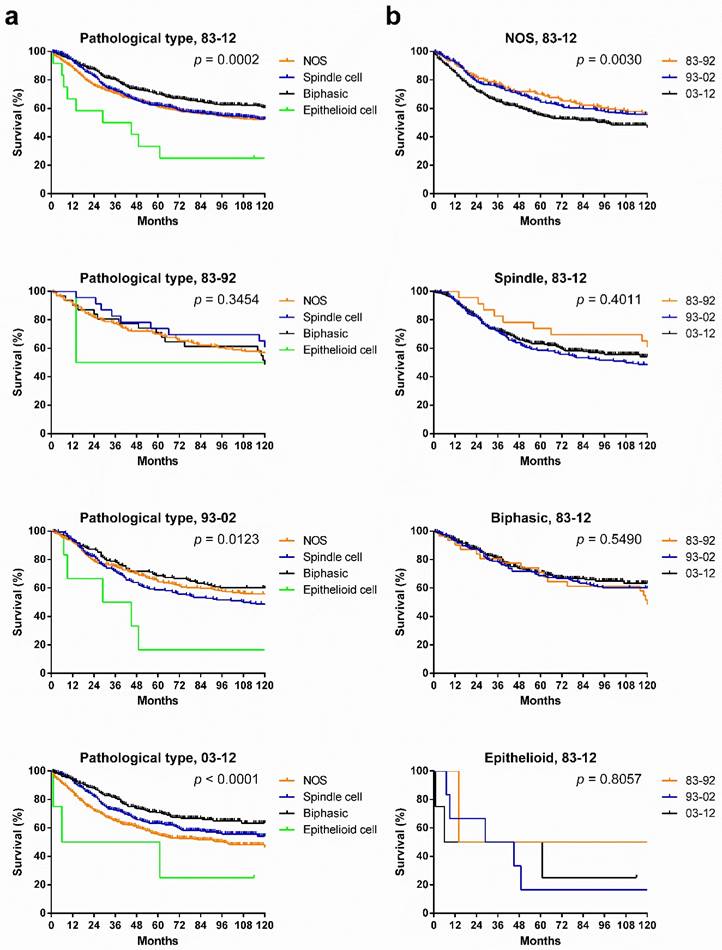 Changes of the percentage of patients in age (a), stage (b), sex (c), site (d), race (e), and pathological types (f) across three decades. 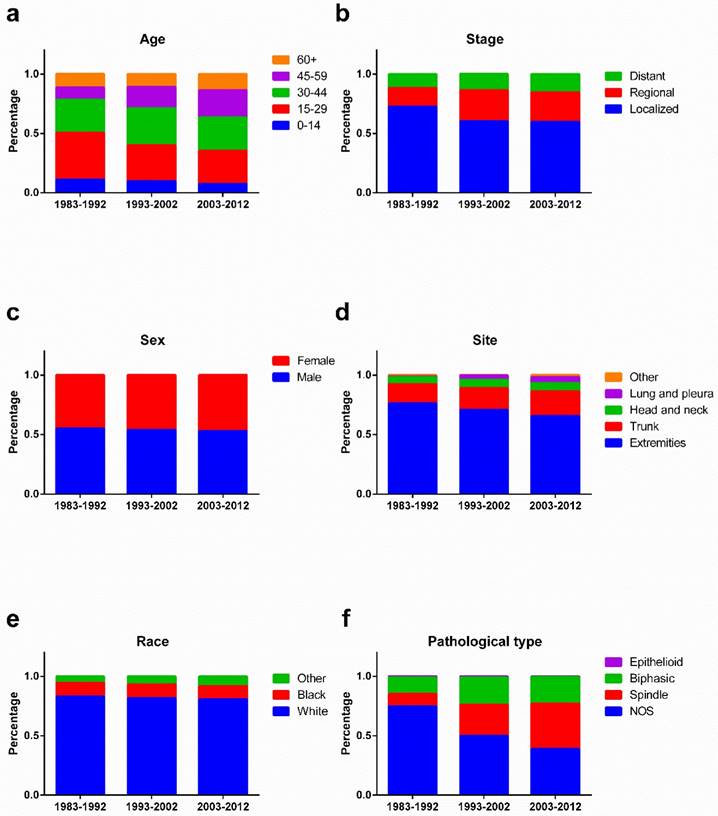 Treatments for SyS have been developed, such as VEGF targeting antiangiogenic therapy. VEGF targeting therapy functions by blocking the signaling of VEGF that depends on the chromosomal translocation SS18-SSX [14]. Cellular therapy targeting NY-ESO-1 has also been proven effective in synovial sarcoma [15]. Pazopanib has been used as a second-line therapy in SyS [16]. Looking ahead, there are many potential targets for SyS in the era of precision medicine. Potential molecular targets include the SS18-SSX fusion protein and overexpressed proteins such as bcl-2, EGFR, and HER-2/neu [17-19].

It is noteworthy that the results and conclusions here were based on the incidence and survival data in selected areas, and therefore it should be interpreted with cautions while applying to other regions. In addition, the internal under-registration and misclassification of SyS inside SEER database may be the potential sources of error and bias [7, 8].

Overall, our study showed the increasing incidence of SyS and more importantly, the unimproved survival between 1983 and 2012. Analyzing the incidence and survival trends of SyS in these last three decades may aid in predicting future trends of incidence and survival. Increasing incidence of SyS highlights the urgency for improving awareness in diagnosing SyS. In addition, it is of great importance to improve clinical management of SyS by developing novel treatments through studies clarifying the tumorigenesis and thereby determining potential therapeutic targets in SyS.