Tubulin Polymerization Promoting Protein Family Member 3 (TPPP3), a member of the TPPP protein family, has been reported to play important roles in initiation and progression of human cancers. However, the expression and underlying function of TPPP3 in colorectal cancer (CRC) have not yet been fully clarified. In this study, the mRNA and protein levels of TPPP3 in 96 clinical CRC specimens were determined by RT-PCR and immunohistochemistry. The relation between TPPP3 expression and clinicopathologic characteristics and overall survival (OS) were evaluated. Further experiments showed that knockdown of TPPP3 inhibited cell proliferation, migration and invasion and induced cell apoptosis in vitro. In addition, TPPP3 silencing resulted in a decrease of angiogenesis and S phase fraction. Thus, our results suggested that TPPP3 played an important role in CRC progress and might serve as novel therapeutic target for CRC treatment.

Colorectal cancer (CRC) is one of the most common types of malignant tumor and the third leading cause of cancer-related deaths in the world [1, 2]. The occurrence rate is significantly increasing and CRC has become the fifth most frequent cause of cancer-related death in China [3]. Despite significant improvement in curative surgical resection and adjuvant chemotherapeutic regimens, the majority of patients are often diagnosed at an advanced stage thus with poor prognosis [4-6]. A growing number of studies have demonstrated that complicated pathogenesis of CRC was a multi-step process involving in the deregulation of multiple oncogenes and tumor suppressors [7-10], thereby emphasizing the need to further understand the molecular mechanisms underlying the formation and development of CRC.

TPPP3, a member of the tubulin polymerization-promoting protein family, was reported to induce tubulin polymerization and microtubule bundling both in vitro and in vivo [11]. TPPP3 was reported to express in joints coincides and represent a molecular marker in joint differentiation [12]. We previously reported that depletion of TPPP3 suppressed cell proliferation and induced cell cycle arrest by regulating centrosomes amplification and/or spindles translocation processes in HeLa cells [13]. Furthermore, TPPP3 was found to increase in NSCLC tissues and associate with short overall survival. Knockdown of TPPP3 inhibited cell proliferation and induced cell apoptosis and cell cycle arrest in vitro and suppressed tumor growth in vivo [14, 15]. Together with those findings, it seems likely that TPPP3 played as an oncogene in cancer.

In the present study, we further assessed whether TPPP3 played any role in tumor development and progress in CRC. Our result showed that TPPP3 was significantly increased in CRC tissues and associated with aggressive factors and poor patient survival. Moreover, we examined the biological function of TPPP3 in CRC cells in vitro.

A total of 96 human primary CRC tissues and their adjacent noncancerous tissues were collected from patients who had undergone gastrointestinal surgery between 2008 and 2010 at Huashan Hospital of Fudan University, China. None of the patients had received radiotherapy, chemotherapy, or other treatments before surgery. Written informed consent was obtained from all enrolled patients, and all investigations were performed according to the declaration of Helsinki. This study was approved by the Ethics Committee of Huashan Hospital of Fudan University, Shanghai, China.

Total RNA was isolated from clinical specimen and CRC cell lines using TRIzol® Reagent (Life Technologies, USA) according to the manufacturer's instructions. Complementary DNA synthesis and the quantitative real-time PCR were performed as our previously reported [15]. The level of TPPP3 was expressed as a ratio relative to the GAPDH.

The protein expression of TPPP3 was measured by IHC method that was performed on 4 μm paraffin-embedded CRC tissue sections as our previously reported [15]. In brief, slides were deparaffinized in xylene, rehydrated using graded alcohol, pre-treated with 10 mM citrate buffer pH=6 and blocked for endogenous peroxidase activity in 3 % H2O2. The slides were incubated with primary antibody against TPPP3 (ABGENT, China), followed by horseradish peroxidase-linked secondary antibody (DAKO, Denmark, CA, USA) for 30 minutes at room temperature. The slides were counterstained with Mayer's hematoxylin, dehydrated and mounted. The TPPP3 protein expressions were scored by multiplying the proportion of positive cells and intensity using the semiquantitative scale described previously [15].

Stable knock down of TPPP3 was performed using short hairpin RNA (shRNA) lentiviral constructs as we described previously [15]. CRC cells were infected with scramble sequence (SCR) or sequences targeting TPPP3 for 24 h. Following this step, the expression levels of TPPP3 were measured by Western blotting.

Cell proliferation and clone formation were performed as we previously reported [15].

Cell migration assays were performed using 24-well Transwell units with 8 µm pore size polycarbonate inserts (Corning, NY, USA). About 4 × 104 cells were harvested in 200 µL serum-free medium and seeded into the upper chamber. 600 μL medium containing 10 % fetal bovine serum was placed in the lower chamber. After 36 h incubation, cells remaining on the upper surface of the insert membrane were wiped off with a cotton swab, and cells through the insert membrane were stained with 0.5 % crystal violet and counted in five random fields under 100× magnification. Representative images of migrated cells were captured under a microscope (Olympus, Tokyo, Japan).

HUVECs (4×104/well) in different conditioned media from CRC cells infected with SCR or shRNA targeting TPPP3 viral were seeded in 96-well plates coated with 200 µL Matrigel. The 24-well plates were incubated for 6 h, and tube formation was then photographed in five random fields under an inverted microscope. The endothelial tubes were quantified by counting length and branches per image field using NIH Image J software.

One-Way ANOVA. Pearson Chi-square test was performed to assess the relationship between TPPP3 expression and clinic-pathological features. Survival curves were calculated by the Kaplan-Meier method, and the statistical analyses were analysed using the log-rank test. P-values less than 0.05 were considered statistically significant.

To investigate the roles of TPPP3 in human CRC, we firstly measured the expression level of TPPP3 in CRC tissues by qRT-PCR. Our results indicated that TPPP3 expression in tumor tissues was markedly higher than that in paired non-tumor tissues (Figure 1A). Furthermore, the mRNA of TPPP3 showed the higher expression in CRC cells than that in human normal intestinal epithelial cell line HIEC (Figure 1B). Similar levels of the TPPP3 protein expressions confirmed that TPPP3 was significantly increased in CRC cells by Western blotting (Figure 1C).

Association between TPPP3 and clinicopathological features of CRC 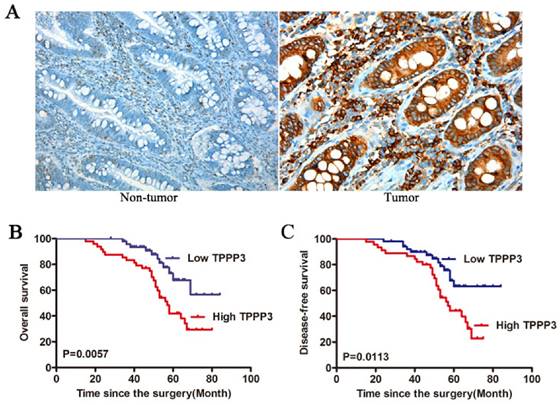 Relationship between clinicopathological factors and TPPP3 expression in primary CRC 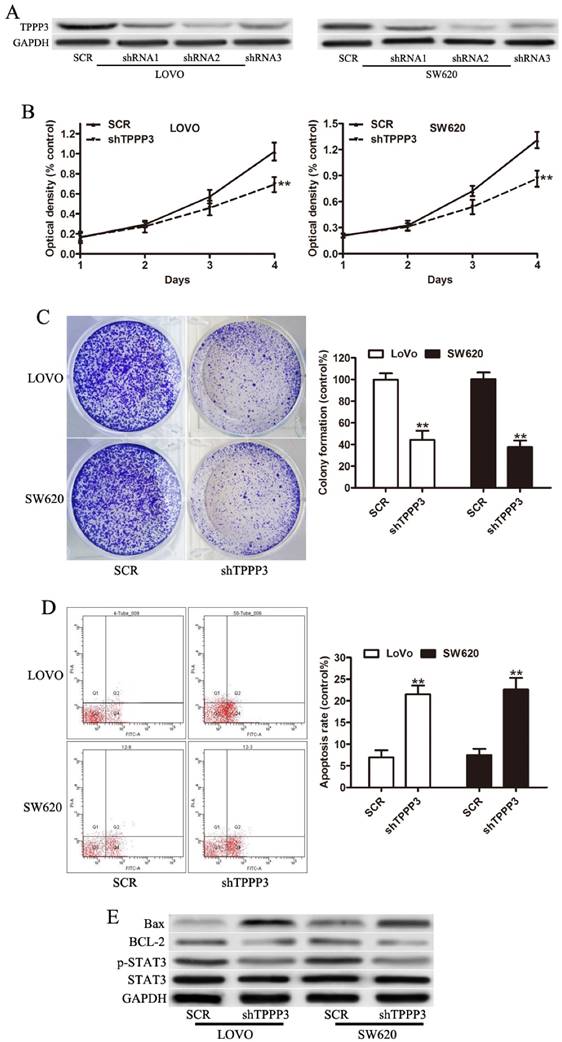 Effect of TPPP3 on the angiogenesis and cell cycle of CRC cells. (A) Representative images of capillary-like structure stimulated by conditioned medium were shown. In vitro angiogenesis was quantitated as described in Materials and Methods. (B) Cell cycle distribution was determined by flow cytometric analysis. Bar graph represents the percentage distribution of CRC cells in different phases of cell cycle. (C) VEGF and P21 expression in CRC cells infected with TPPP3 shRNA or SCR were analyzed by Western blot. **P<0.01. 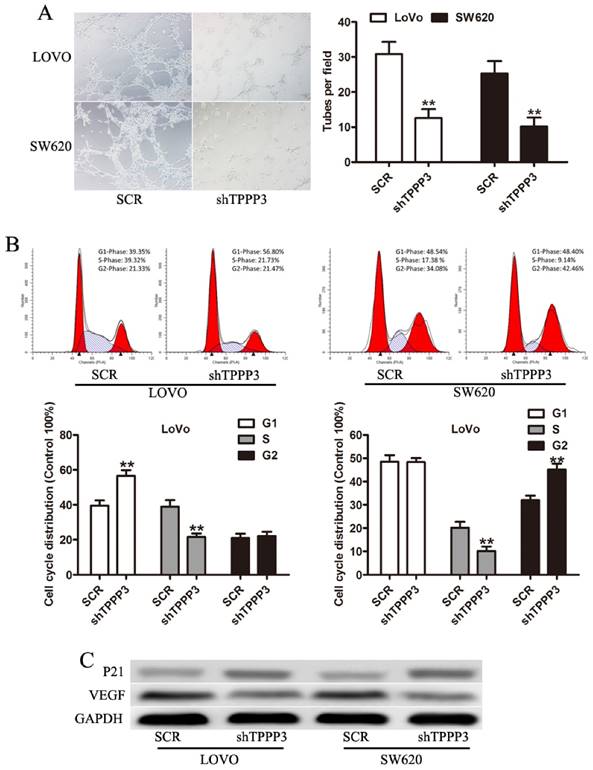 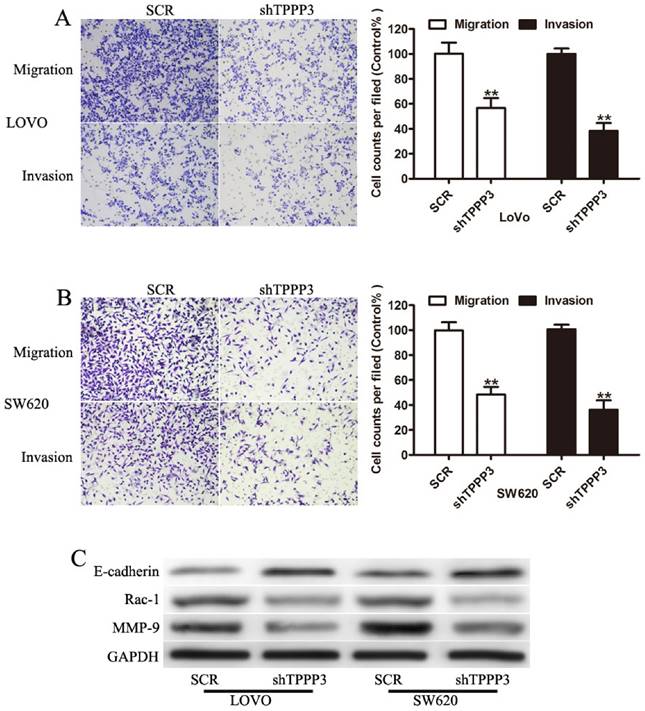 Increasing studies have suggested that TPPP3 might be involved in malignant progression of several human cancers, including cervical cancer and non-small-cell lung cancer [13-15]. However, little is known about its role in CRC. In this study, we presented the first evidence that TPPP3 was significantly up-regulated in CRC tissues at both mRNA and protein levels as compared with adjacent non-cancerous tissues, suggesting a potential promotion of TPPP3 in colorectal tumor formation. Further investigation found that high expression of TPPP3 protein was significantly associated with aggressive characteristic and poor prognosis of patients. In accordance with our study, TPPP3 was reported to be associated with prognosis-related clinical parameters, including tumor size, lymph node metastasis and advanced clinical TNM stage [15]. Kaplan-Meier method showed overall survival rate was significantly lower in patients with high expression of TPPP3 than those with low expression of TPPP3. In addition, the DFS times of CRC patients with high expression of TPPP3 were significantly shorter than those of patients with low expression. These data suggested that TPPP3 might act as an oncogene in the tumor development and progress.

Then we explored the functions of TPPP3 in CRC cells. In vitro experiments revealed that silencing of TPPP3 in LOVO and SW620 cells with higher endogenous expression of TPPP3 could suppress cellular proliferation and induced cell apoptosis. Bax, BCL-2, and p-STAT3 have been reported to involve in cell proliferation and apoptosis in CRC [19-21]. At the molecular level, we observed an obvious decrease in the expression of BCL-2 and p-STAT3 and an increase of Bax expression. This is in line with our previous report showing TPPP3 silencing resulted in a decrease of BCL-2 and p-STAT3 expression [15]. It has been broadly accepted that metastasis was one of the most aggressive factors influencing patients' prognosis and relapse [22, 23]. Interestingly, we found knockdown of TPPP3 inhibited cell migration and invasion and positively correlated with MMP-9 and Rac-1 expression but negatively correlated with E-cadherin expression, suggesting a potential involvement of TPPP3 in metastasis phenotype. In accordance with our study, TPPP3 was reported to be one of the molecules essential for lung cell migration in vitro [14, 15]. In addition, we found that TPPP3 knockdown inhibited angiogenesis and led to a decrease of S phase, accompanied with the downregulation of VEGF and P21 expression. Consistent with our previous report, TPPP3 silencing resulted in a decrease of S phase in NSCLC cells [15]. Taken together, these findings provided the evidence that TPPP3 might be involved in development and progress of CRC. However, the specific regulatory role of TPPP3 remains to be necessary in CRC.

In conclusion, our study for the first time showed that TPPP3 was significantly upregulated in CRC and was associated with the progression and prognosis of CRC. Furthermore, TPPP3 knockdown inhibited CRC cell proliferation, migration, and invasion in vitro. These evidences suggested that TPPP3 might be a potential therapeutic target for CRC patients in the forthcoming future.

This study was supported by the National Natural Science Foundation of China (No. 81471057, 81402288), Promotive research foundation for excellent young and middle-aged scientists of Shandong Province (No.BS2015YY028) and General Financial Grant from the China Postdoctoral Science Foundation (No.2016M602150).