Many preclinical and clinical studies are currently evaluating metformin in combination with classical therapeutic agents as anti-cancer therapy. In this study we used three distinct pancreatic cancer cell lines and evaluated cell death by trypan blue assay and Western Blots using antibodies directed against cleaved caspase 3 and PARP. Surprisingly, we observed that 20mM metformin did not enhance, but rather inhibited gemcitabine induced cell death in murine 7265PDA, 6606PDA and 6606l cells. Microenvironmental aspects such as oxygen supply or the pH value did not influence the inhibition of cancer cell apoptosis by metformin. Glucose concentration in the medium, however, had a major effect on the impact of metformin. Medium with 0.5g/L glucose strongly increased metformin induced apoptosis and also prevented the inhibitory effect of metformin on gemcitabine induced cell apoptosis, when compared with medium containing 4.5g/L glucose. We conclude that the combination of metformin with gemcitabine has inappropriate effects for a successful treatment of pancreatic cancer. Thus, it might be more promising to use metformin in combination with other drugs that reduce the uptake or the metabolism of glucose.

The murine cell lines, 6606PDA, 7265PDA and 6606l were a gift of Prof. Tuveson at the University of Cambridge, UK. The cells were always seeded on 24 well plates in DMEM high glucose medium (Biochrom GmbH, Berlin, Germany) supplemented with 10 % fetal calf serum.

In all experiments the cell culture medium was supplemented with the following therapeutic agents: Gemcitabine (Sigma-Aldrich, G6423, 100 nM), metformin (Sigma-Aldrich, D150959, 20 mM) or gemcitabine (100 nM) plus metformin (20 mM). When treating the cells with gemcitabine plus metformin, the cells were pretreated with 20mM metformin for one hour. The percentage of dead cells was determined after mixing trypsinized cells 1:1 with a trypan blue staining solution using a Neubauer chamber (Life Technologies, CA, USA).

The cells were seeded on 6 well plates in DMEM high glucose medium (Biochrom GmbH) supplemented with 10% fetal calf serum. On the following day the cells covered about 30% of the well surface and were incubated for another 24 or 48 hours with control medium or medium containing therapeutic agents (as described above). After separating the cell lysates on SDS polyacryl gels the proteins were transferred to a polyvinyldifluoride membrane (Immobilon-P; Millipore, Eschborn, Germany) as described previously [10]. The membranes were blocked with 2.5 % (wt/vol.) BSA and incubated overnight at 4 °C with rabbit-anti-cleaved caspase 3 (Cell Signaling, Danvers, MA, USA, code 9661, dilution: 1000x) or rb-anti PARP (Cell Signaling, Danvers, MA, USA, code 9542, dilution: 1000x) followed by incubation with a secondary peroxidase linked anti-rabbit (Cell Signaling, code 7074, dilution: 2000x for cleaved caspase 3 and 20000x for PARP Western Blot). For analysis of β-actin production, membranes were stripped, blocked by 2.5 % (wt/vol.) BSA and incubated with mouse anti-β-actin antibody (Sigma-Aldrich, code A5441, dilution: 20000x) followed by peroxidase-linked anti-mouse antibody (Sigma-Aldrich, USA; code A9044, dilution: 60000x).

Data presentations and statistics using a Mann-Whitney rank-sum test followed by the Bonferroni correction were described previously [10]. Differences with P ≤ 0.05 or P ≤ 0.08, divided by the number of meaningful comparisons, were considered to be significant or to indicate a tendency. 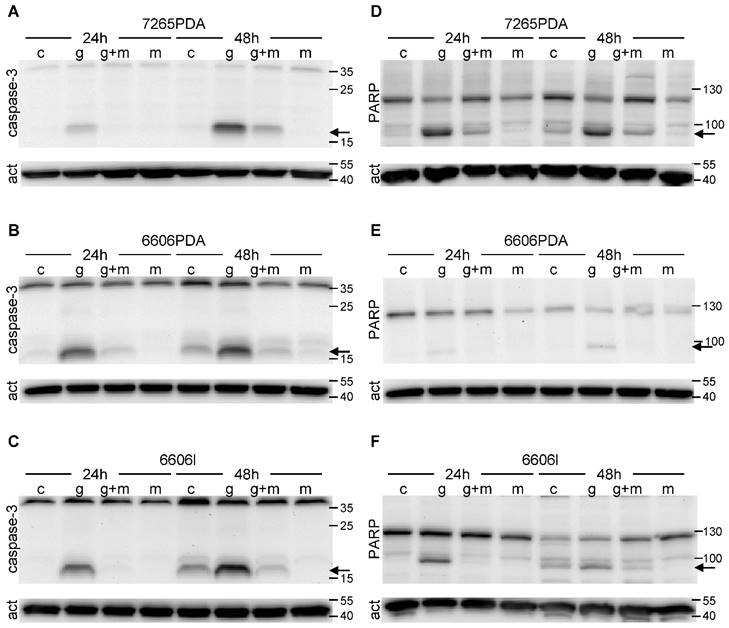 Since microenvironmental aspects within a tumor can have substantial influence on the efficacy of therapeutical agents, we explored if oxygen and glucose supply or the pH value influences the inhibition of cancer cell apoptosis by metformin.

The presented data demonstrate that metformin inhibits gemcitabine induced cell death in three distinct cancer cell lines. This conclusion is supported by data derived by trypan blue staining and by Western Blots analyzing the cleavage of caspase 3 and PARP. However, it is one limitation of this study that we have not used additional methods such as annexin V plus propidium iodide staining. 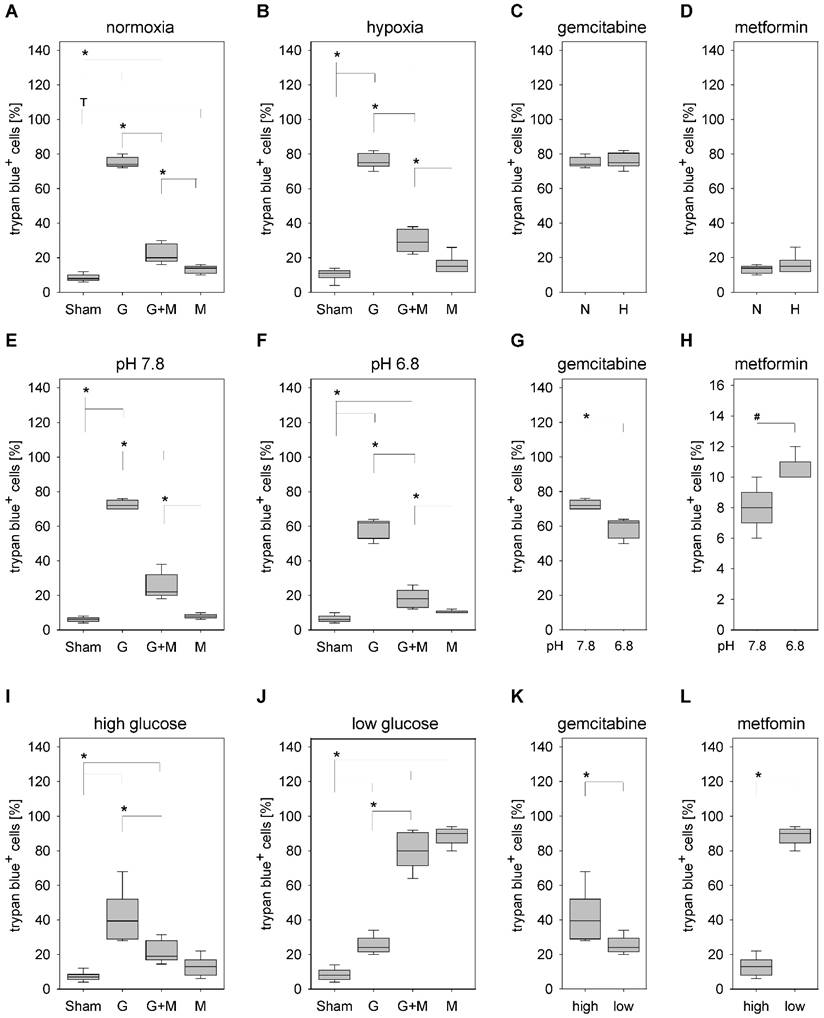 In this study we also explored, if microenvironmental aspects within a tumor, such as oxygen supply, glucose concentration, or distinct pH values, can influence the effect of metformin on cancer cell death. The evaluated concentrations of oxygen (normoxia versus 1% oxygen) were based on the very heterogeneous distribution of oxygen levels, which were observed within tumors [20]. The evaluated concentrations of glucose (0,5g/L versus 4,5g/L) are below or above normal glucose concentrations in the blood and mimic a bad supply of nutrients due to hypovascularization of pancreatic cancer or diabetes, which is often associated with pancreatic cancer [21]. The evaluated pH values (pH 7.8 versus pH 6.8) were based on the heterogeneous distribution of pH values within PDAs analyzed in an orthotopic pancreatic cancer model [10]. Our data (Fig. 3A to E) demonstrate that metformin inhibits gemcitabine induced cell death independent of oxygen supply, or the pH value. Since identical results were observed using distinct experimental settings, the conclusion that metformin does not aggravate, but rather inhibits gemcitabine induced cell death, is very robust.

The observation, that metformin primarily induces cell death of cancer cells when low glucose concentration is present in the medium, might give us a hint, that metformin should be especially useful in combination with other agents that inhibit glucose uptake or glucose metabolism in cancer cells [22]. Thus, combining metformin with drugs inhibiting glucose uptake, lactate dehydrogenase or lactate export might be more successful than combining metformin with classical chemotherapeutic agents such as gemcitabine.

We thank Berit Blendow, Dorothea Frenz, Eva Lorbeer-Rehfeldt and Maren Nerowski (Institute for Experimental Surgery, University of Rostock) for excellent technical assistance. We also thank the B. BRAUN-STIFTUNG (project: BBST-D-15-00003) for financing parts of this study.

The authors declare that there are no competing interests.