Methods: Parous women with inflammatory breast cancer were identified from a prospective registry at The University of Texas MD Anderson Cancer Center. We compared patient and tumor characteristics, LRR, DM, DFS, and OS patients with (BF+) and without (BF-) a history of breastfeeding.

Inflammatory breast cancer (IBC) is a unique clinical manifestation of malignant breast disease and accounts for 2%-4% of invasive breast cancers diagnosed in the United States. Compared with non-inflammatory breast cancer (non-IBC), IBC is associated with an aggressive clinical course and poor outcomes, even after analyses control for established predictive and prognostic factors. While the clinical manifestations of IBC differ substantially from those of non-IBC, the molecular alterations distinguishing these two entities are more subtle [1-7]. Studies have identified genomic alterations, transcriptional signatures, DNA methylation patterns, and differential expression of non-coding RNAs that are enriched in IBC compared with non-IBC [1-7], although none of these molecular platforms can reliably discriminate IBC from non-IBC in the clinical setting. In the absence of obvious genetic or epigenetic alterations, numerous studies have suggested that the mammary gland microenvironment plays an important role in the IBC phenotype [8].

Aside from age and family history, which are the strongest risk factors for developing breast cancer, most other established risk factors for breast cancer are related to menstrual and reproductive history. The most studied of these factors include parity, age at first pregnancy, ages at menarche and menopause, breastfeeding history, and use of exogenous hormone replacement therapy [9]. The physiologic hormonal changes that occur during puberty and especially those that occur during pregnancy and lactation result in marked architectural and cellular remodeling in the breast.

We have previously reported that in women with triple-negative breast cancer, which is the immunohistochemical subtype comprising most basal-like breast cancers, a lack of breastfeeding history or a short duration of breastfeeding was associated with the presence of cells expressing stem cell markers in adjacent normal breast tissue [10]. This association suggests that not breastfeeding may result in a persistent population of aberrant stem cells that may be the target of transformational events or, alternatively, may result in the formation of diffuse stem cell niches throughout normal breast tissue that may alter the behavior of tumor cells that arise years later [8]. Since breastfeeding history appears to permanently affect the normal mammary gland microenvironment and since IBC specifically seems to be influenced by the microenvironment, we sought to investigate the impact of breastfeeding on patterns of recurrence, metastasis, and survival in a prospectively identified cohort of parous IBC patients.

A retrospective analysis was performed using a prospective registry of patients evaluated at The University of Texas MD Anderson Cancer Center who met international consensus guidelines for a diagnosis of IBC [11]. All patients seen at the MD Anderson Cancer Center Morgan Welch IBC Clinic since 2004 have been invited to participate in this registry. Patients who agreed to participate completed an in-person, interviewer-administered questionnaire focused on lifestyle, reproductive, and family factors that influence breast cancer risk. All patients were evaluated by a breast surgeon, breast medical oncologist, and breast radiation oncologist in the multidisciplinary IBC clinic. Biopsy and surgical specimens were centrally reviewed by an MD Anderson breast pathologist, and 1% nuclear expression was used as the cutoff for estrogen receptor (ER) and progesterone receptor (PR) expression, consistent with the current recommendations from the American Society for Clinical Oncology and College of American Pathologists [12]. For our analyses, data were abstracted for patients who had a history of at least one pregnancy resulting in a live birth and were treated with mastectomy followed by adjuvant radiation therapy. These patients confirmed (BF+) or denied (BF-) a history of any breastfeeding. Breastfeeding history was categorized as positive if patients reported any history of breastfeeding, regardless of duration. This study was approved by the institutional review board of MD Anderson.

Patient and tumor characteristics were compared between BF+ and BF- patients using the Fisher exact test (or the Fisher-Freeman-Halton test for 2x3 contingency tables) for categorical variables and the Mann-Whitney test for continuous variables. Time to locoregional recurrence (LRR, defined as disease recurrence within the irradiated chest wall or regional lymphatics), time to distant metastasis (DM, defined as disease recurrence outside of the irradiated field), disease-free survival (DFS, defined as no LRR or DM), and overall survival (OS) were compared between BF+ and BF- patients using the Kaplan-Meier method with the log-rank test. Cox proportional hazard models were used to estimate the hazard ratios (HRs) for risk of LRR, DM, DFS, and OS, adjusted for prognostic clinical and pathologic factors. Significance was defined as p<0.05. All statistical tests were two-sided, and analyses were performed in SPSS version 23. Graphs were generated using GraphPad Prism version 6.

Eighty-two patients (34 BF- and 48 BF+) who met the criteria for inclusion were identified. Their demographic, tumor, and treatment characteristics are summarized in Table 1. For the patients who reported a positive history of breastfeeding, the median duration of breastfeeding was 5.0 months. Most patients received neoadjuvant chemotherapy, and all patients underwent mastectomy followed by post-mastectomy radiation therapy. A comparison of demographic, tumor, and treatment variables by breastfeeding history is shown in Table 2. Patients with a positive history of breastfeeding were younger at diagnosis (median 49.0 years vs. 53.5 years; p=0.02), older at age of first live birth (median 24.0 years vs. 20.0 years; p=0.001), and more likely to be white (81% vs. 70%; p=0.002). The distribution of breast cancer subtypes also differed between the two cohorts, with BF+ patients being significantly more likely to have HER2+ disease (62% vs. 27%; p=0.002) and less likely to have triple-negative breast cancer (13% vs. 32%; p=0.05). The BF+ and BF- groups did not significantly differ in stage, grade, type or sequence of therapy, pathologic complete response after neoadjuvant chemotherapy, age at menarche, number of pregnancies, body mass index at diagnosis, menopausal status, or history of oral contraceptive or hormone replacement therapy use.

aPercentage of patients with ER/PR+ tumors

Comparison of Patient, Tumor, and Treatment Characteristics by Breastfeeding History

aPercentage of patients with ER/PR+ tumors

On multivariate analysis, adjusted for age at diagnosis, race/ethnicity, menopausal status, HER2 expression, triple-negative status, grade, stage, rate of pathologic complete response after neoadjuvant therapy, and receipt of adjuvant chemotherapy and endocrine therapy, positive breastfeeding history was associated with significantly improved DFS (Table 3). This effect was driven almost exclusively by a reduced risk of DM (HR 0.38, 95% CI 0.15-0.97; p=0.04), as there was no effect of breastfeeding on risk of LRR (HR 0.59, 95% CI 0.13-2.41; p=0.43).

Actuarial incidence of local recurrence (A) and distant metastasis (B), and disease-free survival (C) and overall survival (D) by breastfeeding history. Statistic is log-rank test. Number at risk at each interval noted below graph. Percentages denote incidence or survival at five years. 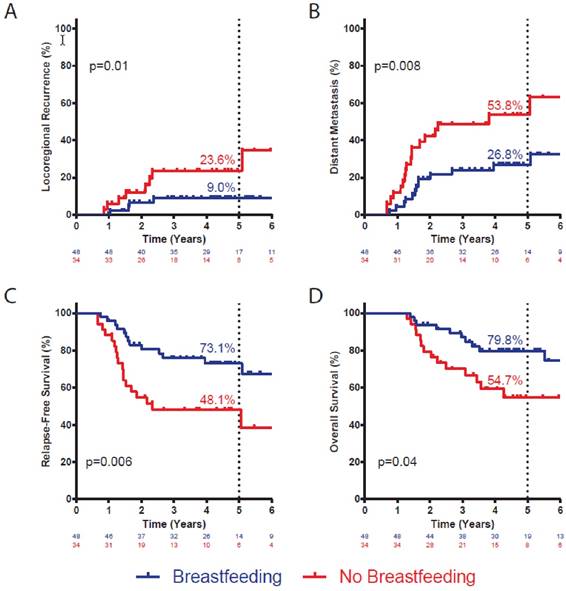 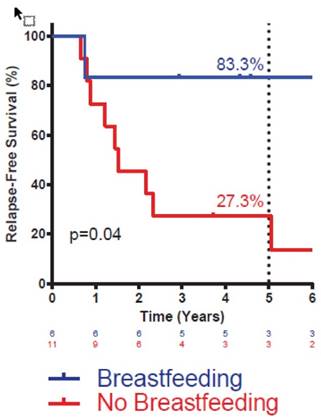 To date, there are no defined molecular alterations or signatures with adequate sensitivity and specificity to discriminate IBC from non-IBC. A potential explanation is that IBC is not a unique molecular entity but rather a manifestation of non-IBC that arises in a microenvironment primed to promote the IBC phenotype [8]. Thus, studies aimed at understanding the IBC microenvironment, and even properties of the normal breast parenchyma that exist before a tumor-initiating event, may illuminate the pathobiology of IBC.

The mammary epithelium undergoes massive expansion during pregnancy, and studies in mice have demonstrated that the abundance of mammary stem cells also increases during this process [13, 14]. Transformation of these cells is thought to give rise to a population of breast cancer stem cells that incite and perpetuate breast cancer. While pregnancy and breastfeeding have generally been considered protective against the development of breast cancer, the process of involution is known to result in a microenvironment that promotes malignant progression [15, 16]. A previous study has shown that involution alters the deposition pattern of collagen, and that the involution-associated extracellular matrix promotes growth and dispersion of tumor cells [15]. This aggressive behavior could be mitigated by inhibiting COX-2, suggesting that arachidonic acid metabolism and production of inflammatory mediators during involution drives tumor progression. The expanded stem cell population that results from pregnancy-associated mammary gland hyperplasia, coupled with the pro-inflammatory microenvironment that accompanies involution, may form the cellular basis for the short-term increase in breast cancer incidence that accompanies pregnancy. Interestingly, breastfeeding has specifically been shown to markedly reduce the risk of basal-like breast cancer, a subtype that exhibits molecular features similar to those of mammary stem cells [17-19]. This reduction in risk may suggest that breastfeeding modulates risk of breast cancer predominately by influencing the mammary stem cell pool.

While the precise mechanisms by which breastfeeding might modulate metastatic potential are unknown, there are several correlative findings from the laboratory that may explain our finding. As discussed previously, not breastfeeding appears to result in a persistent population of mammary stem cells within the breast parenchyma. Normal mammary stem cells and breast cancer stem cells alike exhibit markers associated with the epithelial-to-mesenchymal transition, a developmental program characterized by loss of intercellular adhesion, remodeling of the cytoskeleton, and enhanced migration and invasion. Maintenance of the epithelial-to-mesenchymal transition phenotype appears to be critical for breast cancer stem cell self-renewal and for cancer cell invasion and migration and appears to significantly influence response to chemotherapy and radiotherapy [20-23]. Thus, the expanded pool of mammary stem cells associated with not breastfeeding could result in a more robust population of pre-malignant cells with high metastatic potential. Alternatively, we have postulated that the persistent population of mammary stem cells may not explicitly become malignant but instead generate aberrant stem cell niches throughout the normal breast parenchyma that may alter the behavior of a future breast cancer [8]. Epithelial-to-mesenchymal transition in breast cancer stem cells produces soluble factors that stimulate angiogenesis and recruit cancer-promoting myeloid factors, including interleukin 6, interleukin 8, and granulocyte macrophage colony-stimulating factor [24, 25]. It is conceivable that aberrant mammary stem cell niches may similarly modify the local microenvironment and promote a more aggressive phenotype in malignant cells that arise independently of the expanded stem cell population.

While our results are intriguing, this study does have significant limitations. Although this cohort of subjects was prospectively identified, this analysis is retrospective, of a relatively small number of subjects, with limited ethnic and racial diversity, and at a single institution. Additionally, all epidemiologic data were obtained by questionnaire and, as such, are subject to recall and ascertainment bias. While we do have the total duration of breastfeeding for nearly all patients, we do not have detailed breastfeeding history (e.g., duration of breastfeeding per child). Attempts to analyze breastfeeding as a continuous variable, and dichotomizing our results by receiver operating characteristic analysis, as quartiles, terciles, and above/below the median did not yield meaningful results. Our limited sample size precludes us from analyzing the impact of duration of breastfeeding and speculating about a potential threshold effect.

Although correlative, our data suggest that breastfeeding alters the natural history of IBC. We speculate that involution in the absence of breastfeeding and involution after a sustained period of breastfeeding result in a significantly different cellular and humoral microenvironment that alters the intrinsic risk of developing breast cancer (including IBC) and the behavior of malignancies that do arise. The pre-malignant breast parenchyma should be considered an active participant in the pathobiology of IBC, and a more comprehensive understanding of factors that modify the microenvironment of the mammary gland before a tumor-initiating event is likely to illuminate the unique biology of this disease.

This work was supported by the National Institutes of Health grants R01CA138239-01 and 1R01CA180061-01, the State of Texas Grant for Rare and Aggressive Breast Cancer Research Program, and an institutional research grant from The University of Texas MD Anderson Cancer Center. MD Anderson Cancer Center is supported in part by the National Institutes of Health through Cancer Center Support Grant P30CA016672. B.G.D. is a recipient of Susan G. Komen for the Cure® Postdoctoral Fellowships (KG101478 and KG111387).