Purpose: The aim of the study was to investigate the effect of deficiency of hMLH1 and hMSH2 expression on the prognosis of early gastric cancer (EGC) in Chinese populations.

Methods: A total of 160 EGC patients who underwent curative gastrectomy with lymphadenectomy from January 2011 to July 2014 at Xinhua Hospital were evaluated. The expression rates of hMLH1 and hMSH2 were examined using tissues preserved in paraffin blocks by immunohistochemical staining. The clinicopathological characteristics and prognosis of EGC with deficient hMLH1 and hMSH2 were analyzed.

Although the worldwide incidence of gastric cancer (GC) has been declining steadily, it remains the second most common cancer and the third most common cause of cancer death in China [1] and resent years, the incidence of EGC was increasing [2]. For advanced gastric cancer (AGC), the 5-year survive rate was 20-30%, while the 5-year survive rate of EGC was over 90% after surgery [2]. One of the key factors that negatively affect the survival rate is the late detection of tumor. To achieve a higher cure rate, primary tumors should be detected at the early stage. Therefore, it is crucial to acquire a better understanding of the EGC. Although the extensive researches into GC, the prognostic factors of it remain elusive.

EGC is defined as a lesion confined to the mucosa (T1a) or submucosa (T1b) of stomach, independent of regional LNM [3]. Mismatch repair (MMR) is a kind of DNA repair, which plays a key role in the prevention of mutation and replication of fidelity assurance [4]. Genetic instability resulting from the inactivation of mismatch repair system genes (mostly hMLH1 and hMSH2) is known to be one of the molecular pathways involved in gastric oncogenesis and this mutation is associated with prognosis and specific clinicopathological characteristics in colorectal cancer [5]. Furthermore, MMR protein overexpression was reported in urothelial cancer, sporadic endometrial cancer, glioblastoma and bronchioloalveolar cancer [6-8]. The reason for this phenomenon is unclear.

Here, this retrospective study evaluated the clinicopathological characteristics and prognosis of EGC with dMMR from 160 patients who have undergone surgery for EGC.

From January 2011 to July 2014, 160 patients with pathologically confirmed primary EGC underwent gastrectomy with lymphadenectomy at Xinhua Hospital. Exclusion criteria for the study were as follows: (1) surgery status unknown; (2) recurrent cases; (3) multiple focal; (4) incomplete pathological data. EGC is defined as a lesion confined to the mucosa (T1a) or submucosa (T1b) of stomach, independent of regional LNM [3]. Data were retrieved from medical charts and pathological records. The follow-up data were obtained by outpatient, phone and clinical databases. Written informed consents were obtained from all patients and the study was approved by the Ethical Committee of Xinhua Hospital.

Follow-up of all patients was carried out with the same standard protocol. The periods were every six months for the first 2 years and then once a year. The follow-up items included gastroscopy, physical examination, tumor marker examination, abdominal ultrasonography, chest radiography, haematological and biochemical tests. The mean duration of follow-up was 3.65 years. Length of survival was measured from surgery to the time of death or final follow-up time.

Formalin-fixed, paraffin-embedded tissue specimens of 160 EGC patients were cut into 5-μm-thick sections. The hMLH1 and hMSH2 in primary lesions were detected by immunohistochemistry. All primary antibodies were purchased from Abcam Company (Cambridge, UK). The mouse and rabbit monoclonal antibodies were purchased from Boshide Biotechnology (Wuhan, China). Positive controls were obtained from known positive cases of gastric cancer, whereas negative controls were subjected to the same procedure except that the primary antibody was replaced by PBS.

The patients' features and clinicopathological characteristics were analyzed using the Chi-square test for categorical variables. Estimation of overall survival (OS) rate and five-year OS were calculated by the Kaplan-Meier method, and differences between survival curves were calculated by the long-rank test. Independent prognostic factors were analyzed by multivariate survival analysis using the Cox proportional hazards model. The level of significance was set at P < 0.05. Statistical analyses and graphics were performed using the SPSS 21.0 statistical package.

Clinicopathologic characteristics of these patients with EGC

By Chi-square test, we found that deficient hMLH1 was preferred to middle third of EGC. No statistical significance was observed of the association between other clinicopathological characteristics and deficient expression of hMLH1 and hMSH2 (Table 2).

By Kaplan-Meier analysis and Log-Rank test, we observed that the OS rates of patients with LNM were obviously worse than patients who without LNM (HR = 5.033, 95% CI = 1.150-22.030, P = 0.032) (Fig. 4). For other factors including age, sex, differentiation, depth of invasion, pathological type, location and chemotherapy, we didn't observe statistical significance (Table 3). 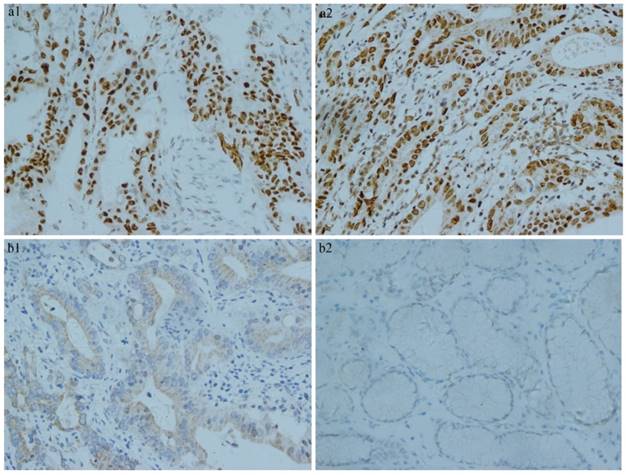 Comparison of the clinicopathological characteristics of patients with dMMR and pMMR 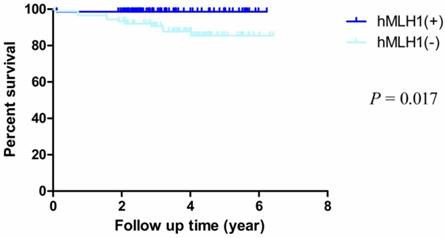 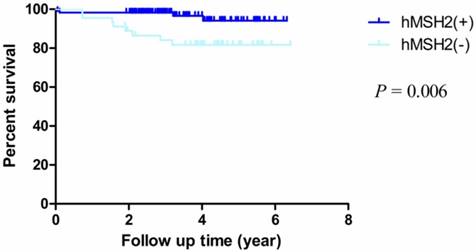 Kaplan-Meier survival curves by lymphatic metastasis status. There were significant differences between LNM (+) and LNM (-) (P = 0.032). 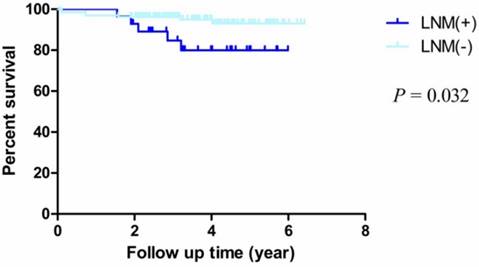 Analysis of all patients by Kaplan-Meier method and Log-Rank test.

While the morbidity and mortality of GC is declining globally, East Asia is still a high prevalence area [1]. With the development of diagnostic techniques and nationwide mass screening programs for GC, the incidence of EGC has been increasing worldwide [11, 12]. In this study, the main findings were as follows: First, both hMLH1 and hMSH2 were the prognostic factors for OS rate and 5-year survival rate of EGC. Second, LNM was also a prognostic factor of EGC. Third, deficient of hMLH1 was more commonly found in middle third of EGC, no statistical significance of the association between mutations rate and other clinicopathological features was observed.

MMR deficiency always accompanies microsatellite instability (MSI) and makes some genes susceptible to mutations, which may lead to a malignant cell transformation [13, 14]. Previous studies have demonstrated that MSI was observed in gastric carcinoma [15, 16]. So far, several MMR genes have been identified and hMLH1 and hMSH2 were the most important ones. As a homologue of Escherichia coli (E. coli) MutS protein, hMSH2 can form heterodimers (hMutS α and hMutS ß) with substrate specificity modifying MutS homologues (hMSH3 and hMSH6). In the process of MMR, DNA base mismatches are recognized by hMutS α or hMutS ß, which interact with a protein complex containing hMLH1 and another homologue of E. coli MutL (hPMS2, hPMS1, hMLH3). hMutS α or hMutS ß directs the removal and replacement of mismatch repairs or larger DNA insertion/deletion loops. Thereafter, DNA-repair synthesis is carried out by DNA polymerase [17]. The loss of hMSH2 and/or hMLH1 expression may cause MMR deficiency, which is closely related to oncogenesis of many malignant tumors such as hereditary non-polyposis colorectal cancer (HNPCC), sporadic colorectal cancer, GC and endometrial cancer [18, 19].

In colorectal cancer (CRC), analysis of dMMR was commonplace. Studies have concluded the clinicopathological features of CRC with dMMR, one of the features was that dMMR was more commonly found proximal colon [20-22]. In our study, we also observed the relations between dMMR and tumor locations. We found that deficient hMLH1 was preferred to the location of middle third of EGC. In previous study, SHUJI SASAKI et.al [23] observed that hMLH1 deficiency was increasing in elderly female EGC patients. But in the study of Moghbeli M et.al [24], they found no significant correlation between hMLH1 expression and clinicopathological features, which was consistent with us. No statistic significances were observed of the association between other clinicopathological characteristics and deficient expression of hMLH1 and hMSH2, except the tumor location of EGC. Reasons for these discrepancies may be as follows. In SHUJI SASAKI et.al study, the objects were GC, while in our study the objects were EGC patients. In addition, the sample size and ethnicity were different.

LNM is a common metastasis approach of malignant tumor. Several studies showed that LNM was the major negative prognosis factors and it presents in 5.7 to 20% patients of EGC [25-27]. Noh, S. H et.al [28] reported that the 5-year survival rate was 87.3% of EGC patients with LNM, while patient who without LNM was 94.2%. In our study, by multivariate analysis we confirmed this conclusion and observed that LNM was the independent prognosis factor for EGC.

It is generally believed that dMMR, often showing loss of hMLH1 and hMSH2, is usually caused by exon mutation or promoter methylation. And it was always believed that MSI was caused by this mutation [29]. For CRC, a systematic review including 32 studies concluded that CRC patients with dMMR were more sensitive to chemotherapy and had more favorable survival compared with patients with pMMR [30]. However, we have not found literatures on the prognosis value of dMMR in EGC, but there were studies reported the association between MSI and gastric carcinoma, and the conclusions were controversial [31-33]. Lately, researchers analyzed the outcomes of GC with MSI status. They observed that the prognosis of GC with MSI was not better than patients with microsatellite stability [31]. In our study, we analyzed two members of the MMR, hMLH1 and hMSH2, in EGC. The main purpose was to compare the OS of EGC patients with dMMR and pMMR. By statistical analyzing, we observed that the OS of EGC patients with pMMR were obviously better than those with dMMR. This difference was statistically significant. That's to say, the prognosis of EGC patients with dMMR was worse than those with pMMR. According to the previous researches of CRC, the status of MMR may influence the prognosis by changing the sensitivity to chemotherapy [22]. We conducted an analysis on the subgroup of chemotherapy, no statistic significant was found. We analyzed the different outcomes thoughtfully, reasons may be as follows: First of all, we have the different research objects, our patients were EGC and theirs were GC or CRC. Then, the research factor was not exactly the same. We analyzed the factor of dMMR, while they researched the MSI. Although we believed MSI was caused by dMMR, researchers reported that a high percentage GC with MSI expressed hMLH1 or hMSH2 [31, 33]. Furthermore, the sample sizes and ethnicity were also different. Our study is the first time to report on the relationship between dMMR and the prognosis of EGC. The main role of MMR system is the post-replicative repair of the errors made by DNA polymerases that have escaped proofreading. MMR gene defects may cause the high frequency of cell mutation and the formation of the mutant phenotype. Do not be in time to repair the mismatch genes in malignant cells may lead to a poor prognosis [7, 34].

In conclusion, EGC with dMMR was found no specific clinicopathologic characteristics, except that dMMR preferred to middle third of EGC. EGC patients with dMMR have worse survival than pMMR ones. In addition, LNM was also a prognosis factor of EGC. However, our study was the first time to report the prognosis of ECG with dMMR, this conclusion needs more studies with large sample sizes to confirm.

10. Khoo JJ, Gunn A, Peh SC. Pattern of hMLH1, hMSH2 and hMSH6 expression and clinical characteristics in a sample of Malaysian colorectal carcinoma cases. The Malaysian journal of pathology. 2013;35:45-57