Mesothelin, a 40-kDa cell glycosylphosphatidyl inositol (GPI)-linked protein, has been found in mesothelial cells lining the peritoneum, pleura and pericardium usually [7, 8]. The overexpressed mesothelin has been detected in mesothelioma and pancreatic cancer [9, 10]. Mesothelin overexpression has also be found in many other cancers in serum and other body fluids, including ovarian malignancies, gastric cancer and lung adenocarcinomas [11-13]. Recent studies have reported the biological function of mesothelin with colorectal cancer in vitro [14]. Moreover, the significantly overexpressed mesothelin was identified in colon cancer serum [15]. No studies to date are available about the plasma mesothelin as potential biomarker for colorectal cancer.

A total of 147 patients with colorectal cancer and 121 healthy controls were recruited in this study. In the first stage, 40 primary colorectal cancer cases were pathologically confirmed in the Third Affiliated Hospital of Nanjing University of Chinese Medicine before May 2016. Forty cancer-free controls were recruited from those seeking medical care in local hospitals with frequency-matched to cases on age (± 5 years) and gender. In the second stage, 107 colorectal cancer cases and 81 controls were recruited from the First Affiliated Hospital and the Affiliated Nanjing First Hospital of Nanjing Medical University starting from September 2010. A total of 54 patients were followed-up through telephone calls at regular intervals for up to 5 years and the median survival time (MST) was 41.3 months. Approval for this research was acquired from the Institutional Review Board of Nanjing Medical University.

A total of 5 ml blood of all subjects was collected in anticoagulant tubes and centrifuged to obtain plasma samples. Additionally, a paired-sample set of preoperative plasma and postoperative plasma (7 days after postsurgical removal of primary tumors) were collected from 9 colorectal cancer patients. All the samples were stored at -80°C for further experiment.

To determine the level of mesothelin in plasma samples, a human enzyme-linked immunosorbent assay (ELISA) kit (Cusabio Biotech Co., Ltd., Wuhan, China) was performed following the manufacturer's instructions. All samples were assayed after 5-fold dilution and the tests were conducted at least in duplicate. Moreover, the investigators were blind to participant clinical status. The lower limit of detection of mesothelin was 0.078ng/ml and all the samples were measured over the limit.

We conducted Student's t-test and χ2 test to give the P value to evaluate the differences of demographic characteristics between colorectal cases and controls. The level of mesothelin was showed as mean ± standard deviation (SD). We used Wilcoxon test to compare the statistical differences in plasma mesothelin level between two groups. The analysis method was also applied to estimate the statistical differences between preoperative plasma and postoperative plasma samples. To identify the diagnostic power of plasma mesothelin, we used receiver operating characteristic (ROC) curves and the area under the curve (AUC). The suitable diagnostic cutoff value of mesothelin was determined by Youden index [16]. To evaluate the association between mesothelin level and the risk of colorectal cancer, logistic regression analyses were performed to calculate odds ratios (ORs) and their 95% confidence intervals (CIs). Moreover, log-rank test was used to analyze the subgroup's survival time. Hazard ratios (HRs) and their 95% CIs were calculated by cox regression analysis. Two-sided P-value less than 0.05 was considered as statistically significance and all the statistical analyses were conducted with SAS software (SAS Institute, Cary, NC, USA).

There were 147 colorectal cancer cases and 121 cancer-free controls in this two-stage case-control study. The detailed information of characteristics is shown in Table 1. The average age of cases and controls was 60.7 and 59.6 respectively, and no significant differences between patients and controls were identified in age (P = 0.500) and sex (P = 0.858). In addition, we found no notable differences in drinking and smoking status between two groups (P > 0.05). However, significantly increased frequency of family history of cancers was found in colorectal cancer group (P < 0.001).

Characteristics and clinical features between colorectal cancer cases and controls

aCombine Stage 1 and Stage 2 as the combined stage.

The prediction and diagnosis of colorectal cancer using plasma mesothelin

The utilization of plasma mesothelin in the operative effect evaluation 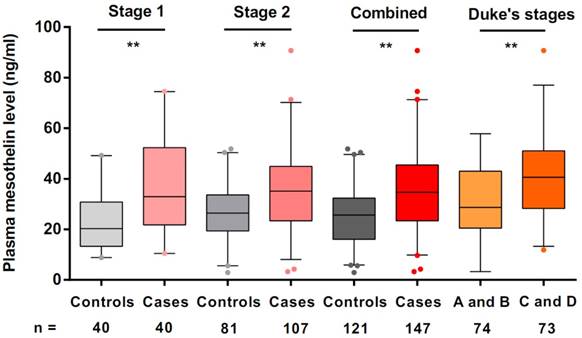 Associations between selected variables and overall survival of colorectal cancer.

aMean survival time was provided when median OS could not be calculated.

bP value was adjusted by age and sex.

Association of mesothelin levels with survival in colorectal cancer patients

Next, we used log-rank test to analyze whether mesothelin level in plasma is associated with colorectal cancer patients' prognosis. As shown in Table 4, patients with lower mesothelin in plasma had longer survival time, compared with patients whose mesothelin levels were higher than 36.50 ng/ml (log-rank P < 0.001). Furthermore, cox regression analysis revealed that there were statistically significant associations between elder individuals, drinkers and lower survival time (adjusted HR = 2.83, 95% CI = 1.33-6.00, P = 0.007; adjusted HR = 3.72, 95% CI = 1.26-11.0, P = 0.018). However, when stratified by sex, smoking status, tumor site, size and grade and Duke's stage, we observed no significant difference in survival time in each following subgroup compared with each above subgroup (log-rank P > 0.05). We also found that patients with higher levels of plasma mesothelin had a prominent poor prognosis than those with lower mesothelin levels (adjusted HR = 4.43, 95% CI = 1.93-10.15, P < 0.001). 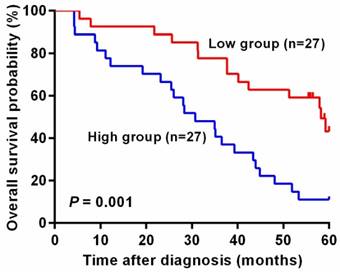 ROC analysis has revealed that the pooled sensitivity was only 48.3% although the specificity was 83.5%. The AUC of 0.690 only touched a marginal clinical value in diagnosing colorectal cancer. Therefore, a larger cohort of prospective samples from additional hospitals need to be validated. Moreover, we only recruited the controls from those seeking medical care in local hospitals. We also did not recruit more appropriate control group, including some patients with other colorectal diseases. Due to these limitations of our study, the plasma mesothelin may has a moderate diagnosis value of colorectal cancer. In addition, a significant association of high mesothelin level in plasma with poor survival was confirmed in 54 colorectal cancer patients. We found that individuals with lower mesothelin level may have a remarkably higher survival rate than patients with higher mesothelin level. Our results, along with recent researches [20, 21], highlight the association of overexpressed with poor prognosis in several cancers. Together, it is possible to apply plasma mesothelin in diagnosis and prognosis of colorectal cancer. Recent studies have found that some potential biomarkers can be combined to apply in diagnosis or prognosis of cancers to enhance the sensitivity and specificity [22, 23], implying the diagnosis value of plasma mesothelin with some other biomarkers. Owning to the invasion of pathological diagnosis or colonoscopy to patients, we need to find some biomarkers more safe, effective and without surgery, like plasma biomarkers.

We also compared mesothelin level between preoperative and postoperative plasma samples. We found that mesothelin levels in plasma of colorectal cancer cases were slightly decreased 7 days after surgical tumor resection. In spite of no significant level change in 9 paired patients, further more paired plasma samples should be included to identify the association of mesothelin with the effect of tumor resection. However, the sample size of colorectal cancer cases was small and more paired samples need to be collected.

In conclusion, we have identified the plasma mesothelin as a potential biomarker with diagnosis and prognosis values in colorectal cancer, which was significantly increased in colorectal cancer cases, compared with controls. Further studies in biological function are needed to validate our findings.