Background: Insulin resistance (IR) has been well studied in the initiation and development of endometrial endometrioid carcinoma (EEC). As yet, it has been largely neglected for estrogen sensitivity in local endometrium in hyperinsulinemia-induced systemic microenvironment. The aim of this study was to investigate the role of insulin in regulating estrogen sensitivity and explore the potential mechanisms in insulin-driven inflammatory microenvironment.

Methods: We first investigated the effect of insulin on estradiol-driven endometrial cancer cells proliferation in vitro to address the roles of insulin in modulating estrogen sensitivity. Then GPER, ERα and TET1 in EEC samples with or without insulin resistance were screened by immunohistochemistry to confirm whether insulin resistance regulates estrogen receptors. Further mechanism analysis was carried out to address whether TET1 was mediated epigenetic modulation of GPER in insulin-induced microenvironment.

Conclusion: This study identified TET1 as the upstream regulator of GPER expression and provides a possible mechanism that insulin-induced positive regulation of estrogen sensitivity in endometrial cancer cells. Increasing expression of GPER through TET1-mediated epigenetic modulation may emerge as the main regulator to enhance the response of endometrial cancer to estrogen in insulin-driven inflammatory microenvironment.

Sustained estrogenic stimulation without progesterone has been accepted to be the main pathogenesis of endometrial hyperplasia and endometrial endometrioid carcinoma (EEC) [1]. As yet, serum hormone analysis showed serum estradiol is not elevated in endometrial hyperplasia and EEC patients compared to control [2]. On the other hand, observational studies also reported there is no higher risk in postmenopausal women with unopposed 10 μg estradiol vaginal tablets for 1 year compared with those with no such exposure [3]. A 14-year observational follow-up in women initially randomised to receive one table of estrogen valerate (2mg) or placebo daily for 2 years showed that unopposed estrogen may be used safely by women with an intact uterus surviving a first myocardial infarction [4]. These clinical data and investigations suggested that it might be the estrogen sensitivity of local endometrial that drives endometrial carcinogenesis rather than increased circulating estradiol level.

The siRNAs for ERα, GPER and TET1 was designed by Dharmacon. The plasmid pPB-TET1 was kindly provided by Prof. Shi Yujiang (Harvard University, Cambridge, MA). The siRNAs and plasmids transfection was conducted using Lipofectamine 3000TM (Invitrogen) according to the manufacturer's protocol. The transfection efficiency was confirmed by western blot.

The endometrial cancer cells were seeded in 96-well plates (2000 cells/well). After siRNAs transfection, these cells were incubated with insulin (100nM) and/or E2 (10nM) in phenol-red free and FBS free DMEM/F12 medium for 48h. Cell proliferation was measured by sulforhodamine-B (SRB) assay as previously described [14]. Cells were fixed with ice-cold 10% trichloroacetic acid (TCA) at 4°C for 1h, then washed five times in distilled water and allowed to dry in the air. 100μl SRB was added to each well and incubated at room temperature for 30 min. Unbound dye was then removed by 1% v/v acetic acid washing. Wells were placed on a shaker platform with 100μl unbuffered Tris Base (10 mM, pH 10.5) for 5 minutes and optical density (OD) at 492 nm was measured by Varioskan Flash (Thermo Scientific).

Immunofluorescence analysis was described as before [16]. The primary antibodies to GPER and TET1 were purchased from Sigma Aldrich, 5-hmc from Active Motif and anti-rabbit IgG-FITC was purchased from Jackson. All these antibodies were used according to the manufacturer's instructions. DAPI was used for identifying cell nucleus. Fluorescence was detected by confocal microscopy (Leica TCS SP8 Configurable Confocal).

Total RNA extraction and reverse transcription were performed as before [17]. Real-time quantitative PCR (RT-PCR) analysis was performed with SYBR Premix Ex Taq (Takara, Dalian, China) according to the manufacturer's protocol. The RT-PCR primers used were synthesized by Sangon Biotech (Shanghai, China) and listed in Table S1.

Each of 5 endometrial cancer cases with or without insulin resistance was collected. The pathological type of all these cases was adenocarcinoma Grade 1. Patients' information is provided in Table 1. Sections from endometrial cancer lesion were used for immunohistochemical staining of GPER, ERα and TET1. Primary antibodies to GPER and Ten-eleven translocation 1 (TET1) were purchased from Sigma aldrich, and ERα from Cell signaling technology. PBS was used as a negative control. All the clinical specimens in this study were approved by the Medical Ethics Committee of the Obstetrics and Gynecology Hospital of Fudan University (Shanghai, China).

Semi-quantitative optical analysis of immunohistochemical staining of these markers was described as before [18]. This part was carried out by two independent blinded observers. Briefly, ten representative high-magnification fields (400×) per slide were selected for calculating positive cell percentage. According to staining intensity (0, negative; 1, weak; 2, moderate; and 3, strong), the multiplying product of positive cell percentage with staining index was calculated. Then, the product was divided by three, making the IHC score from 0 to 100. Pearson correlation test was used for correlation analysis of these markers.

Genomic DNA extraction was performed according to the manufacturer's instructions (QIAGEN). Dot blotting analysis was carried out as previously described [2]. One μl DNA (0.5μg/μl) was dropped on nitrocellulose membranes and cross-linked by a UV lamp (2,000 w) for 5 min, then blocked with 10% milk for 1h and incubated with 5-hmC primary antibody (Active Motif) overnight at 4°C. Secondary antibody (Jackson) was applied to bind 5-hmC and ECL reagent to detect densitometry. Methylene blue (MB) staining was used as a loading control.

hMeDip assays were carried out as previously described[19]. 5-hmC antibody (Active Motif) was purchased from Active Motif, rabbit IgG was used as negative control. PCR was carried out using primers for GPER promoter, which is shown in Table S1. 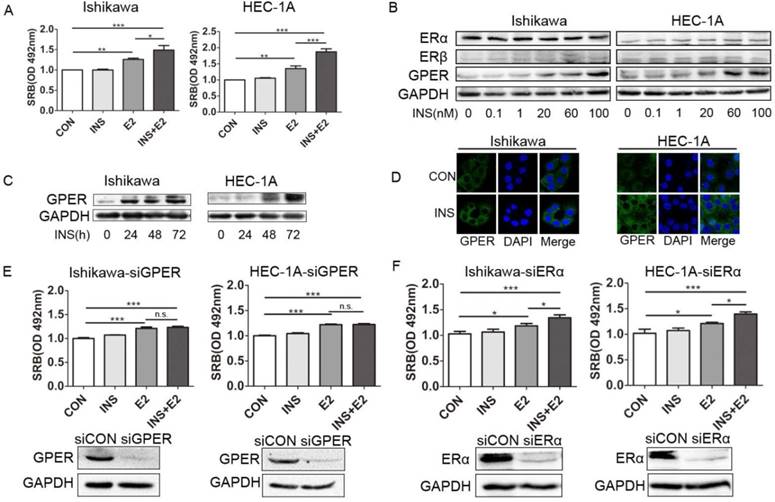 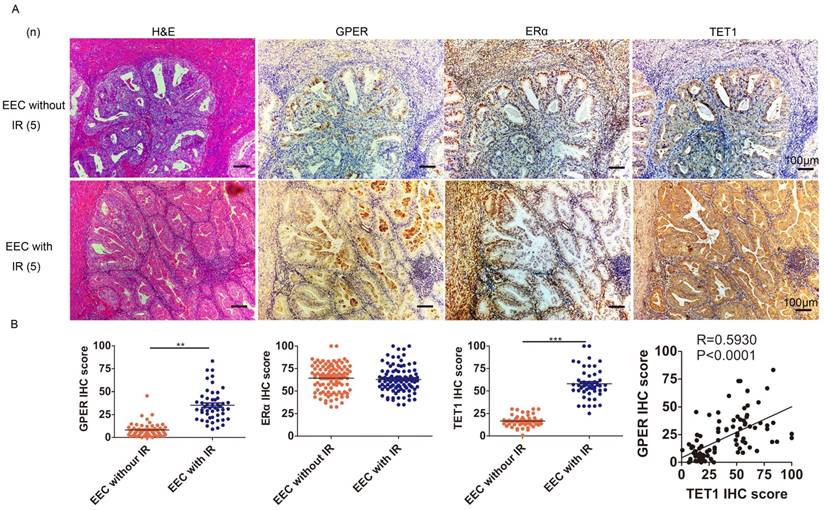 We further explored the possible mechanism involved in GPER up-regulation in insulin microenvironment. We first detected the transcriptional level of GPER after insulin treatment. The increased GPER mRNA level after insulin treatment documented that insulin promoted GPER transcription in endometrial cancer cells (Fig. 4A). Coupled to the previously described roles for TET1 in promoting gene expression [26], we assessed whether GPER up-regulation induced by insulin was directly attributable to TET1. We analyzed GPER expression in endometrial cancer cells after silencing or over-expressing TET1 by either siRNAs or cDNA plasmid. As shown in Fig. 4B, GPER expression was significantly down-regulated after silencing TET1, and additional insulin treatment could not rescue the attenuated GPER expression. On the other hand, overexpression of TET1 significantly enhanced GPER protein expression in endometrial cancer cells (Fig. 4C). Mechanistically, hMeDip assay showed showed that insulin treatment resulted in significant increase of 5-hmC in GPER gene promoter region in HEC-1A cells, whereas silencing TET1 by siRNA compromised GPER gene promoter hydroxymethylation (Fig. 4D). These findings indicated that TET1 is involved in insulin-driven GPER up-regulation through hydroxymethylation. 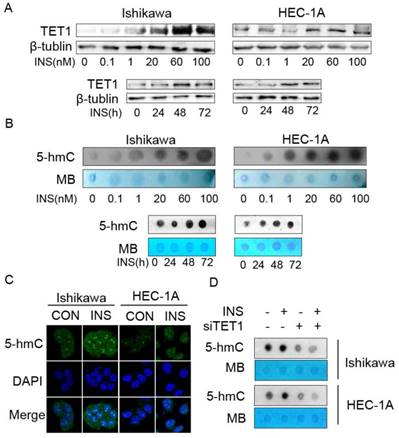 Epigenetic modulation is one of the important mechanisms of environmental factors regulating tumorigenesis [25]. Epigenetic changes might be caused by these environmental factors including hypoxia, inflammation, free radicals [31]. As a systemic environmental factor, hyperinsulinemia has been reported to regulate several genes methylation status [32]. Our results also showed that high level insulin treatment up-regulated the level of 5-hmC in genomic DNA, suggesting DNA hydroxymethylation regulation played an important role in insulin resistance-associated endometrial carcinogenesis.

TET1 mediates GPER up-regulation by hydroxymethylation in insulin-driven microenvironment. A. Ishikawa and HEC-1A cells were treated with 100nM insulin for 24 h. GPER transcriptional level was analyzed by real time PCR. Data shown were normalized for GAPDH expression and then calculated as fold changes of relative mRNA expression. B. Insulin induced GPER expression through TET1. Endometrial cancer cells were transfected by siCON or siTET1. Cells with or without silencing TET1 were treated with 100nM insulin for 48h. The fold change of GPER relative to control group was calculated from densitometry. C. Increased TET1 expression up-regulates GPER expression. TET1 was overexpressed in endometrial cancer cells by tranfecting pPB-TET1 plasmid. GPER and TET1 expression were analyzed by western blot. D. TET1 affects hydroxymethylation of GPER gene promoter in insulin condition. HEC-1-A cells transfected with siTET1 or siCon were treated with 100nM insulin for 24h. 5-hmC level of GPER gene promoter fragment was detected by hMeDIP. * p < 0.05, **p < 0.01,***p < 0.001 compared to control. 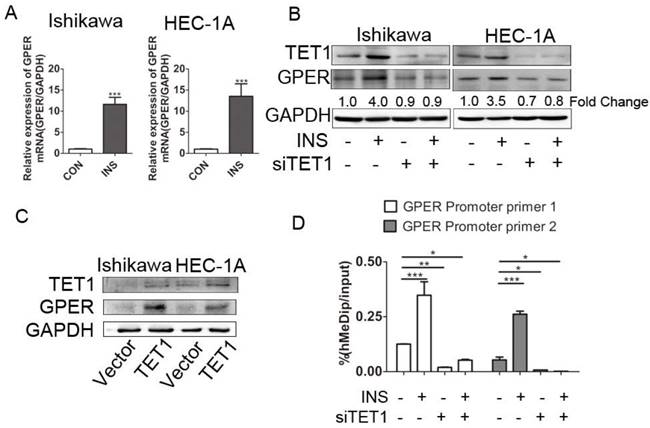 Increased GPER signaling induced by Insulin establishes a feed-forward loop in PI3K/AKT signaling pathway. A. LY294002 abolished insulin-induced TET1 and GPER expression. The endometrial cancer cells were pre-treated by LY294002 (10uM) with or without insulin treatment for 48h. GPER and TET1 expression was analyzed by western blot. B. A proposed model that insulin induces GPER expression through TET1-mediated epigenetic mechanism to sensitize endometrial cancer cells to estrogen. 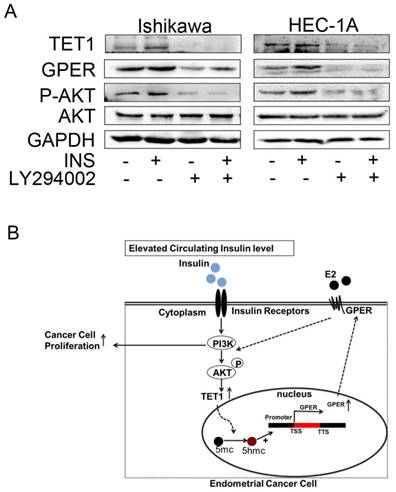 Recent reports showed that the level of 5hmC and ten-eleven translocation (TET) family enzymes were altered in various types of cancers [33]. As a 5-hmC regulator, TET1 is a key epigenetic modulator in 5-mC to 5-hmC conversion. Hypoxia, chronic inflammation or other factors could up-regulate TET1 expression and trigger its downstream target gene transcription [26]. Mechanistical analysis showed that TET1 and 5-hmC are enriched at promoter regions of several pluripotency factors, including Nanog, Tcl1, and Esrrb [26, 34]. And also, TET1 regulated hypoxia-induced gene expression, such as INSIG1 (insulin induced gene 1), and epithelial-mesenchymal transition (EMT) [34]. Even in colorectal cancer, it was reported that IGF signaling could regulate Nanog via STAT3 signaling and promote EMT [35]. Besides, our latest study showed there was gradually increased TET1 expression in endometrial lesions with infiltrating macrophages [2]. In the present study, we found that TET1 was overexpressed in both insulin treatment and EEC samples with insulin resistance, suggesting TET1 might play roles in genes expression in endometrial cancer complicated with hyperinsulinmia. Accordingly, hydroxymethylation of GPER promoter region was altered when TET1 was up-regulated or silenced. This suggests that TET1 might be the up-stream regulator of GPER gene in the microenvironment of insulin resistance.

The present study showed that insulin could promote endometrial cancer cells proliferation but not significantly. This result contradicts findings from Marco et al. [36] that IGF-Ⅰcould promote Ishikawa cell proliferation significantly. In our model, all SRB assays were carried out in FBS free medium. Conversely, their assays were incubated in medium containing 2.5% charcoal stripped FBS. The different pro-proliferative effect might be explained by the factors in charcoal-stripped serum.