Aberrant fucosylation plays a functional role in regulating ontogeny and celluar differentiation and are differentially regulated in cancerous condition, which could provide hallmarks for cancer diagnostics and surveillance. We previously developed a magnetic beads-based lectin ELISA system to measure fucosylated haptoglobin (Hp), which has been reported to be a cancer biomarker through a series of glycoproteomic analysis. In this study, serum fucosylated Hp ratios were measured using our ELISA kit in a separate cohort of 260 patients independently, including 130 healthy controls and 130 patients with hepatocellular carcinoma (HCC). Fucosylated Hp /Hp ratio (levels of fucosylated Hp /levels of protein Hp) and ELISA Index (OD value of fucosylated Hp /OD value of protein Hp) were calculated respectively to reflect Hp fucosylation level on its protein level. Our data showed that fucosylated Hp /Hp ratio (AUC=0.8449) and ELISA Index (AUC=0.8581) had better performance in distinguishing HCC from controls, which indicated that fucosylated Hp ratios could improve the diagnosis and prediction of HCC even with a low level of alpha-fetoprotein (AFP). Additionally, the combination analysis of AFP and fucosylated Hp ratios increased the AUC value for HCC diagnosis.

According to the International Agency for Research on Cancer, liver cancer caused 745,500 deaths worldwide during 2012, with half of the total happening in China [1]. HCC is the most (70% to 90%) common form of liver cancer with the characteristics of high morbidity and mortality as well as the poor prognosis, which could be induced by multiple etiologies and influenced many risk factors, such as chronic hepatitis B virus (HBV) infection [2, 3]. Current surveillance and diagnosis of HCC in high risk population is based on ultrasound and AFP [4]. Unfortunately, ultrasound surveillance even performed every three months cannot improve detection of small HCC, on account of limitations in recall procedures [5]. As the most commonly used serum biomarker, AFP exists controversies regarding its clinical usefulness for HCC, because of lacking sufficient sensitivity and specificity [4]. In order to guide the optimal management and to improve the prognosis as well as the survival rate of HCC patients, it is extremely urgently to discover and validate novel candidate biomarkers for the preclinical prediction and diagnosis of HCC.

Glycosylation is one of post-translation modifications with acting as a key regulatory mechanism controlling several biological processes; it is involved in critical cancer cell processes, such as cell signaling, cellular differentiation and invasion, ligand-receptor interactions and metastasis formation [6]. Accumulating evidence suggests that altered glycosylation in serum protein is a frequent event during tumor development and progression, serving as promising biomarkers and providing specific targets for therapeutic intervention. Several typical representatives of glycobiomarkers have been reported to diagnose cancer, such as AFP-L3 (a core fucosylated glycoform) [7], α1-acid glycoprotein (AGP) [8], α1-antitrypsin [9], Hp [10, 11], etc.

In previous study, we demonstrated that various types of fucosylated structure on Hp were increased significantly in serum from HCC patients by lectin blot, high performance liquid chromatography (HPLC), as well as mass spectrometer (MS) [12-14]. Recently, we developed an ELISA kit based on Aleuria Aurantia Lectin coated magnetic beads (AAL@Magbeads) to analyze fucosylation changes of Hp from serum samples, which based on the differential binding of Hp to AAL@Magbeads [15]. With this method, serum fucosylated Hp could be detected rapidly and sensitively. In this study, both Hp protein level and fucosylated Hp were taken into consideration and we confirmed that fucosylated Hp /Hp ratio and ELISA Index could improve the diagnosis and prediction of HCC even with a low level of AFP. Combination of clinically used biomarker AFP and fucosylated Hp ratios had better performance in distinguishing HCC from controls.

The serum fucosylated Hp levels were determined using our AAL@Magbeads based ELISA system [15]. AAL (Vector, Burlingame, CA) coupling to COOH-Magbeads (1 μm diameter particle size, BioCanal Scientific, Jiangsu, China) was performed according to manufacturer's protocol, and the beads were blocked with phosphate buffer saline (PBS) containing 2% bovine serum albumin (BSA) and 2% glycine for four hours. After washing three times with PBST (0.05% Tween20 in PBS, pH 7.2-7.4), AAL@Magbeads were diluted (1 mg/mL) in PBS before use. A 96-well ELISA microplate (Koma biotech, Korea) was blocked with 3% BSA in PBS for one hour. One hundred microliters of AAL@Magbeads was added to the pre-blocked microplate, discarding the supernatant. A concentration gradient (0, 0.5, 1, 1.5, 2, 3, 4, 5 μg) of commercial Hp which was purified from human plasma (Calbiochem, San Diego, CA) was used to establish a standard curve. One hundred microliters of 50-fold diluted serum samples in binding buffer (0.1 M Tris-HCl, 0.15 M NaCl, 1 mM CaCl2, 1 mM MgCl2, pH 7.5) were incubated with AAL@Magbeads for one hour. After washing with PBST, HRP-conjugated antihaptoglobin (R&D system, USA) was applied to each well and incubated for one hour. TMB working solution was added, followed by stop solution. After sufficient color development (15 minutes), the optical density (OD) values were read with a microplate reader at wavelength of 450 nm.

Determination of Total Hp and AFP

The protein abundances of Hp were measured using Human Hp Quantikine ELISA kits (R&D system, USA). A standard curve was generated by Hp standard (3.13, 6.25, 12.5, 25, 50, 100, 200 ng/mL) from this kit. Twenty microliters of 20,000-fold diluted serum from each sample enrolled in the study was examined according to the manufacturer's protocol. The serum AFP level was determined using an electrochemiluminescence immunoassay (ECLIA) system.

All statistical analyses were performed with the SPSS 20.0. Statistical comparisons were determined using analysis of variance (ANOVA) and Wilcoxon rank-sum test. Receive operating characteristic (ROC) curves were generated by sensitivity and 1-specificity. The cutoff was determined as the point in ROC that maximizes the value of sensitivity plus specificity. The value of area under the ROC curve (AUC) was calculated as an indication of the accuracy prediction. Diagnostic models were obtained by binary logistic regression. (Two-tailed) P-value below 0.05 was assumed as statistically significant.

In this study, 130 patients with HCC and 130 normal controls were used. All the HCC patients were associated with HBV infection and were diagnosed based on histopathology, laboratory and imaging data. Healthy volunteers were characterized by the presence of normal liver biochemistry and no history of liver disease or alcohol abuse. The clinical data of the patients were provided in Table 1.

The values supplied in Table 1 were means with SD or range.

Diagnostic values of biomarkers in differentiating HCC from healthy controls 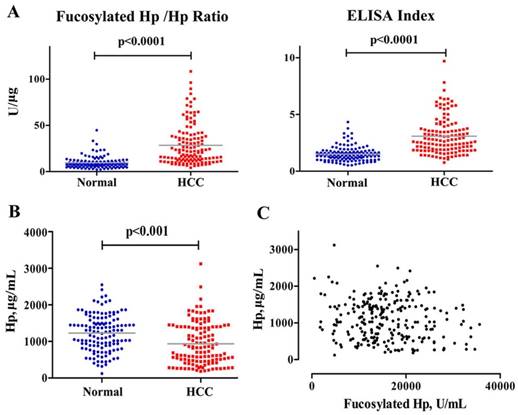 In the decades, tremendous efforts have been focused on the discovery and verification of novel biomarkers to improve cancer detection. However, most of these hallmarks could be detected in various cancers, instead of in one certain cancer. For instance, the Tn (GalNAc-Ser/Thr) and STn (Sialyl-Tn, NeuAcα2-6GalNAc-Ser/Thr) antigens are aberrant O-glycosylation frequently over-expressed in many cancers [19, 20], which are associated with poor prognosis and tumor metastasis [21, 22]. Cumulative studies showed that Tn antigen was highly expressed in cancers of breast [23], pancreas [24], colon [25, 26], lung [27], ovary [28], stomach [29]. STn neo- or over-expression has been described in many types of epithelial cancer including pancreas [24, 30, 31], colorectal [26, 32], ovarian [20] and breast cancers [33]. Similarly, increased fucosylation of Hp has also been reported in cancers of pancreas [34], prostate [11], lung [35], ovarian [36] and colon [37]. Therefore, it is necessary to combine clinically used biomarker AFP with ELISA Index or fucosylated Hp /Hp ratio for HCC diagnosis.

The most-common clinically utilized serological biomarkers for cancer diagnosis, monitoring and recurrence are glycoproteins [38]. Currently, these biomarkers have been reported to have aberrant glycosylation in cancer progression, such as AFP for HCC [39], carbohydrate antigen 125 (CA 125) for ovarian cancer [40], prostate-specific antigen (PSA) for prostate cancer [41]. As the most typical representative, AFP-L3 is a core-fucosylated glycoform of AFP, which has been approved as a diagnostic index for HCC by the US food and Drug Administration [42].

Basically, fucosylation is regulated by complicated mechanisms and is involved in several factors, fucosyltransferases, GDP-fucose transporter and GDP-fucose synthesis pathway [43]. The fucosyltransferase family of enzymes was responsible for the addition of fucose to glycoproteins, which was over expressed in HCC [44]. Additionally, the up-regulation of GDP-fucose transporter plays a pivotal role in increased fucosylation in HCC [45]. Furthermore, the biosynthesis of GDP-fucose, a sugar nucleotide, is significantly increased in HCC tissues, which is a common donor substrate for all fucosyltransferases, has a similar regulatory influence on the fucosylation [46]. These factors might result in the increased levels of fucosylated Hp in patients suffering with HCC. Moreover, it was also reported that pancreatic cancer cells could secrete an inducible factor, IL-6, which stimulated the production of fucosylated Hp in hepatoma cells [46].

Accumulating evidence suggested that fucosylation interfered with key cancer processes as well as the tumor microenvironment, even leading to tumor progression. Fucosylation has been reported to influence many ligand-receptor interactions [47, 48] and play an important role in some signaling pathways, including tumor necrosis factor-related apoptosis-inducing ligand (TRAIL) -mediated apoptosis of tumor cells [49]. As Hp could interact with CCR2 and CD163 on tumor-associated macrophages, fucosylation changes of Hp has the potential to modulate macrophage activity and the immune response through influencing the secretion of chemokines, cytokines or proangiogenic factors, creating an microenvironment in favor of tumor growth, angiogenesis, and eventually, tumor metastasis [50].

In summary, our results demonstrated fucosylated Hp /Hp ratio and ELISA Index, could be potential glycobiomarkers for the surveillance and diagnosis of HCC even with a low level of AFP. Moreover, combination of AFP and fucosylated Hp ratios could improve the sensitivity and specificity of HCC diagnosis.