Conclusions: MRI-detected tumor residue was an independent adverse prognostic factor in NPC; and significantly associated with three-month post-treatment EBV DNA. As limited resources in some endemic areas prevent patients from undergoing routine post-treatment imaging, our study identifies a selection risk-model, providing a cost-effective reference for the selection of follow-up strategies and clinical decision-making.

Though biopsy is well recognized as the gold standard for the diagnosis of residual tumors, its routine use is not welcome because of its invasive property. Moreover, 69.4% of recurrent lesions occur outside the nasopharynx, and are difficult to be obtained by biopsy [7]. In addition, even for the residual lesions in nasopharynx, the chance of single biopsy missing residual tumors is 26.4% [8]. Magnetic resonance imaging (MRI) has recently emerged as the preferred modality, and has a high overall accuracy (92.1%) for detecting residual and/or recurrent NPC at the primary tumor site [9].

When to evaluate residual diseases remains inconclusive. He et al. reported that despite the superiority of IMRT, MRI-detected tumor residue at the end of IMRT was prognostic for poor outcomes in locoregionally-advanced NPC [10]. However, initiation of additional treatment too early may lead to over-treatment of patients whose residual tumors may undergo spontaneous histologic remission slowly but firmly after a period of time. It is reported that most spontaneous remissions occur within 12 weeks after treatment; late tumor regression (within 12 weeks) did not jeopardize overall local control [8]. On this basis, three months after RT is widely regarded as an appropriate time-point for comprehensive clinical evaluation.

To comprehensively explore the influences of MRI-detected tumor residue on NPC patients in the era of IMRT, we conducted a cohort study to explore the prognostic value of MRI-detected tumor residue at three months after IMRT in NPC. Additionally, as Epstein-Barr virus deoxyribonucleic acid (EBV DNA) is clinically assessed to assist risk stratification, prognostication and relapse supervision [11, 12], we also investigated whether plasma EBV DNA at three months after RT was associated with tumor remission.

A nasopharyngeal carcinoma database that was prospectively maintained by the Sun Yat-Sen University Cancer Center (SYSUCC) between November 2009 and February 2012 was retrospectively analyzed. The database recorded information regarding sociodemographic data, pretreatment evaluation, disease extension, treatment administration, and follow-up status (Supplementary Materials). The patients included in this study fulfilled the following criteria: (1) histologically confirmed, non-metastatic NPC without previous malignant disease or second primary tumor, (2) receipt of radical radiotherapy based on IMRT for the whole course, (3) regular follow-up with complete post-treatment examination, including nasopharyngoscopics, plasma EBV DNA, MRI et al., (4) no evidence of distant metastasis during the first three months after treatment, (5) no previous anticancer treatment or adjuvant chemotherapy. A total of 664 patients were eligible in this analysis (Table 1). All patients were restaged according to the 7th edition of the UICC/AJCC staging system. The institutional review board at SYSUCC approved the analysis of the anonymous data.

MRI imaging was performed with a 1.5-T system (Signa CV/i; General Electric Healthcare, Chalfont St. Giles, UK). The region from the suprasellar cistern to the inferior margin of the sternal end of the clavicle was examined with a head-and-neck combined coil. The detailed information was presented in Supplementary Material.

Diagnostic criteria of tumor residue was: (1) tumor residue in nasopharynx, other soft tissues or intracranial spaces, represented as hypo-intense signal on T1-weighted imaging, hyper-intense signal on T2-weighted imaging and enhancement following administration of Gd-DTPA; (2) skull base lesions were considered tumor residue if the bone of the skull base was destructed with soft tissues and the degree, and/or scope of bone strengthening had not decrease or increased compared to pre-treatment images[13, 14]; (3) regional lymph nodes were diagnosed as residual if they had a short-axis diameter > 10 mm for cervical lymph nodes and > 5 mm for retropharyngeal nodes. Pre- and three-month post-treatment MRI scans for each patient were independently reviewed by two senior radiologists specializing in head and neck cancer who were blinded to clinical findings. Any disagreements were resolved by consensus.

Clinical characteristics of the 664 patients with nasopharyngeal carcinoma

a According to the 7th edition of the American Joint Committee on Cancer.

To establish the risk score model, firstly univariate analyses (i.e. logistic, Chi squared) were initially performed [19]. Next, multivariate logistic regression model with backward elimination was used to establish a model for the binary categorical outcome (i.e. residual tumor or not) and explanatory variables selected in step one. Finally, a model for estimation of residual risk was generated as Z = β0+β1X1+β2X2+...βnXn. (The β0 is the constant of regression coefficients, X1...Xn are independent variables in logistic equation, β1...βn the corresponding coefficients. Individual residual risk scores were calculated using: e Z / (e Z + 1) × 100, where e is the base of natural logarithm and Z calculated according to the logistic regression equation [20]. Calibration of the model, to evaluate agreement between expected and actual observed outcomes, was performed using the Hosmer-Lemeshow goodness-of-fit test [21]. SPSS version 19.0 software (IBM, Armonk, NY, USA) was used for all analysis; two-tailed P < 0.05 was considered statistically significant.

a Regions A: nasopharynx, parapharyngeal space and other surrounding soft tissues; B: skull base and infratemporal fossa; C: intracranial region; and D: retropharyngeal lymph nodes and cervical lymph nodes. 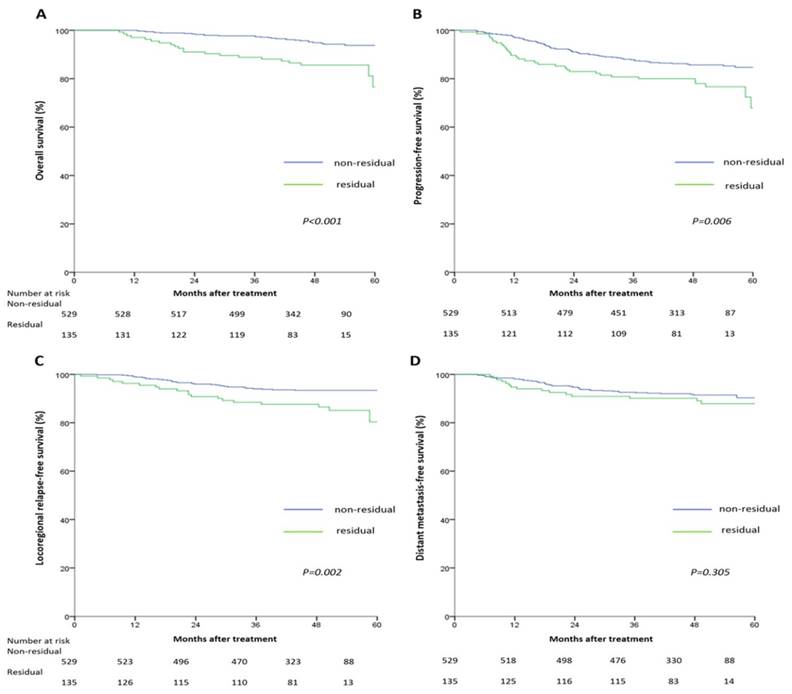 a The following parameters were included in the Cox proportional hazards model multivariate analysis with backward elimination: age (> 45 vs. ≤ 45 years), gender (female vs. male), T category (T3-4 vs. T1-2), N category (N1-3 vs. N0) and chemotherapy (yes vs. no).

Linear distribution of the residual tumor rate according to risk score. 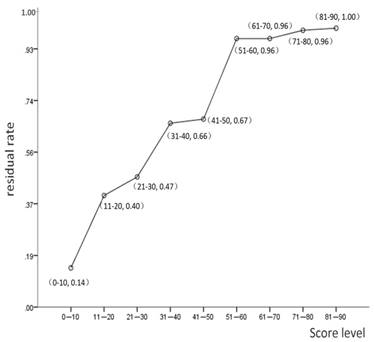 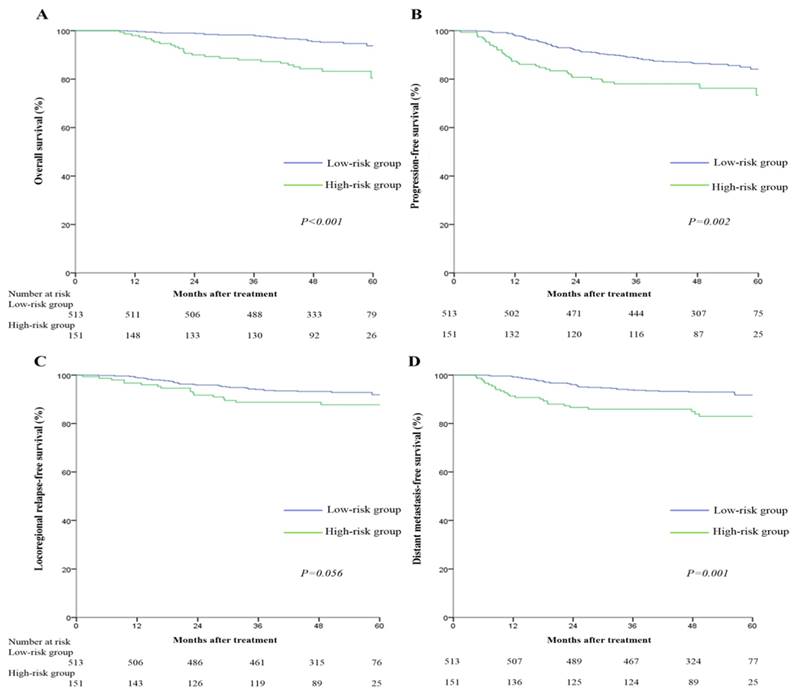 a The following parameters were included in the logistic regression analysis with backward elimination: age (> 45 vs. ≤ 45 years), T category, N category and chemotherapy (yes vs. no).

a The following parameters were included in the Cox proportional hazards model multivariate analysis with backward elimination: age (> 45 vs. ≤ 45 years), gender (female vs. male), T category (T3-4 vs. T1-2), N category (N1-3 vs. N0) and chemotherapy (yes vs. no).

IMRT has proven advantages of better tumor coverage and toxicity profiles in NPC [22]. However, the features and prognostic values of tumor response in patients undergoing IMRT remained inconclusive. To the best of our knowledge, this is the first and largest study to investigate MRI-detected tumor residue at three months after IMRT and its association with post-treatment plasma EBV DNA in NPC.

Clinically, it is essential for oncologists to evaluate tumor response to RT. Three factors need to be considered: the selection of evaluating approaches, time course of tumor remission, and the cost-effectiveness of evaluations.

Firstly, oncologists should decide the optimal evaluation modality. In this cohort of 664 patients with NPC, only 4.4% of residual lesions were restricted to nasopharynx, parapharyngeal space and/or other surrounding soft tissues, and 19.3% in cervical lymph nodes; the remaining residual lesions were in areas not easily accessible by biopsy (skull base, intracranial areas, retropharyngeal lymph nodes, etc.). Thus, imaging tools (i.e. MRI, PET-CT) are more suitable for comprehensive evaluation of residual tumors. Though PET-CT has a high specificity of 93.4% and is less influenced by RT-induced inflammation [23], there is a trend towards greater overall accuracy for MRI over PET-CT in detection of residual and/or recurrent NPC [9]. In addition, due to physiologically high FDG uptake by the brain, PET-CT cannot easily detect intracranial/perineural/pterygopalatine-fossa invasion. Thus, MRI would be the optimal choice to comprehensively evaluate residual tumors in NPC.

The second issue is the optimal evaluation time-point. As the time-course of tumor remission remains controversial, some researchers tend to assess residual status at the end of treatment. He et al. [10] reported MRI-detected tumor residue after completion of IMRT was a significant negative prognostic factor for survival. Other researchers favor evaluations at 3-6 months after treatment. Lin et al. [24] revealed a strong correlation between recurrence and tumor residue at 3-6 months after RT. Clinically, initiation of additional treatment too early may result in over-treatment and unnecessary side effects in patients who may achieve spontaneous histologic remission later. Conversely, delaying salvage treatment too long may carry potential risks, as radioresistant cancer stem cells could repopulate if true persistent disease remained [25]. According to Kwong et al. [8] 70.4% of patients with positive biopsies at completion of RT achieved complete remission within 12 weeks; the number of patients who achieved spontaneous remission after the twelfth week was very low; in addition, delayed remission before twelve weeks was not prognostic for poor survival. Thus, it was reasonable to set the evaluation time-point at three months after RT. In this study, 20.3% of patients had tumor residue at three months after RT, similarly to studies by Hong et al. [26] (17.2%) and Liu et al. [27] (21.6%); these slight differences may be due to multiple factors including differences in clinical staging, radiation technologies, therapeutic regimens etc.

Last but not least, the cost-effectiveness of evaluation methods should be taken into account, as limited resources in some areas may prevent patients from undergoing routine post treatment imaging (e.g. MRI or PET/CT) in NPC endemic regions. Plasma EBV DNA was found to be a non-invasive and economic approach that offered important information in tumor burden, treatment failures and prognosis in NPC [11]. We wondered whether this convenient examination could provide any hints on tumor residue. Interestingly, detectable three-month post-treatment EBV DNA was significantly associated with the presence of tumor residue, and served as the strongest indicator of all clinical variables. The possible reasons for the strong correlation between the post-treatment EBV DNA and tumor residue are that plasma EBV DNA level represents tumor DNA level, and can originate from necrotic or apoptotic cancer cells. The presence of viral DNA in viral-related tumors offers a distinct marker for detection in the blood; thus, patients with detectable EBV DNA levels after treatment are prone to have residue tumors and experience local and distant failure. As three-month post-treatment EBV DNA was highly effective, furthermore we established a risk score model consisting of three-month post-treatment EBV DNA, T and N categories to indicate the presence of tumor residue. The model had an overall accuracy of 81.3%, and thus represents a non-invasive and cost-effective decision-making guide for post-RT evaluations. Based on this model, it is reasonable to recommend low-risk patients with possible RT-induced inflammation undergo less invasive examinations (observation, nasopharyngoscopy and/or MRI). Conversely, MRI, PET-CT, and/or histologic biopsy could be strongly recommended for the high-risk group. In addition, as high-risk score is an unfavorable prognostic factor for survival, it could also be used to guide post-RT therapeutic regimens. Additional chemotherapy, surgery and/or boosting irradiation could possibly be recommended as timely salvage treatments for the high-risk group, whereas the low-risk group may not gain much benefit from further interventions. Clinical trials are warranted to help improve treatment outcomes in NPC.

There are some limitations need to be addressed. MRI observations could be subjective compared to biopsy, and some RT-induced inflammation persisted at three months can be difficult to confirm without pathological verification. However, to minimize potential bias, two experienced radiologists independently assessed all images with disagreements resolved by consensus.

In conclusion, the presence of MRI-detected tumor residue at three months after IMRT was a significant adverse prognostic factor for survival in NPC, and significantly associated with post-treatment EBV DNA. The established risk score model consisting of EBV DNA, T and N categories identifies as a selection criterion for post-treatment imaging. As limited resources in some areas prevent patients from undergoing routine post treatment imaging in NPC endemic regions, our study may provide a valuable reference for accurate post-treatment evaluation and clinical decision-making to improve treatment outcomes in patients with NPC.