Background: Nuclear receptors (NRs) are a class of transcription factors that regulate many cellular functions through manipulation of gene expression and also play important roles in tumorigenesis, proliferation, progression and prognosis in various kinds of cancers according to recent studies. This work aimed to determine the predictive ability of NRs in muscle-invasive bladder cancer (MIBC).

Bladder cancer is the seventh most common cancer in the world [1] and is the most common urologic malignancy in China [2]. As newly estimated, there were 80,500 new cases in China in 2015, including 62,100 men and 18,400 women [3]. Bladder cancer is staged via the tumor-node-metastasis system, which describes the extent of invasion (Tis-T4) [4]. According to the 7th edition of the TNM classification published by the UICC, bladder cancer can be divided into non-muscle invasive bladder cancer and muscle invasive bladder cancer (stage T2 or above) [5]. Approximately 30% of patients suffer MIBC at the time of diagnosis and they have a less favorable prognosis with 5-year survival rate less than 50% [6, 7]. Despite improvements in surgical techniques and post-operative recovery, the complexity and high cost of procedure remains highly challenging [8], and the treatment has not been advanced for several decades [9]. Therefore, to further understand the prognosis and to develop new biological therapies, knowledge of novel biomarkers for MIBC is in an urgent need.

Nuclear receptors are a class of proteins that are responsible for sensing steroid and thyroid hormones and certain other molecules. These proteins can work with other molecules to regulate expression of specific genes. In humans, there are 48 kinds of NRs [10], which can be classified according to mechanism [11] or homolog [12]. Members of NR superfamily have the ability to regulate the development, homeostasis and metabolism, thus are correlated with a variety of diseases including cancer. Till today, many kinds of NRs are proved to be closely associated with the prognosis of cancer, including breast cancer [13, 14], gastric cancer [15], colon cancer [16], prostate cancer [17, 18], ovarian cancer [19, 20] and so many others. However, the potential roles of NRs in BCa, especially in MIBC, and their biological functions on tumorigenesis, recurrence and prognosis remain unknown. So in this study, we aim to find out if certain NR gene expression level is associated with patients' recurrence or prognosis with MIBC, and has the potential to serve as a novel biomarker.

Our study was carried out in accordance with the ethical standards of Helsinki Declaration II and approved by the Institution Review Board of Fudan University Shanghai Cancer Center. Written informed consent was obtained from each patient before any study-specific investigation was performed.

For TCGA cohort, patients' nuclear receptor gene expression and clinical information were downloaded from the website of Cancer Genomics Browser of University of California Santa Cruz (http://genome-cancer.ucsc.edu/). Forty-eight members of nuclear receptor gene family are included in the database as is presented in Supplementary Table 1. Originally, 436 lines' data was obtained. Then, we excluded patients with unclear event, age, gender, tumor subtype, tumor grade, stage and no RNASeq data, along with patients with a T stage of T0 or T1. After all, we included 308 patients of muscle-invasive bladder cancer from TCGA dataset.

For the FUSCC cohort, 123 muscle-invasive bladder cancer patients from 2008-2012 who underwent radical cystectomy were enrolled retrospectively and consecutively. All these tissue samples were collected during surgeries and stored at -70℃ in the tissue bank of FUSCC. Clinicopathological characteristics were obtained from our electronic records. Patients were regularly followed up by telephone or in the clinic once every 3 months. Events, including death and recurrence, were recorded.

In the FUSCC cohort, total RNA of tumor tissue was isolated from all 123 patients' samples using TRIzol reagent (15596-026, Invitrogen). A PrimeScript RT reagent kit (K1622, Thermo Scientific) was used to synthesize first-strand cDNA from total RNA. After that, we performed SYBR Green real-time PCR analysis using ABI 7900HT machine (Applied Biosystems, USA). We used β-actin mRNA expression level as a reference. NR1H3 and NR2F6 mRNA expression level was normalized to β-actin [21]. The primers for qRT-PCR analysis were synthesized by Sangon (Shanghai, P.R. China), sequences of which are shown as following:

Overall survival was calculated from the date of surgery to the date of death or last follow-up. Recurrence-free survival was defined as the time from the date of surgery to the date of first recurrence or last follow-up. Patients without events or death were recorded as censored at the time of last follow-up. Gender, tumor subtype (papillary vs non-papillary), histological grade (high vs low), family history, adjuvant chemotherapy and patient group (initial vs relapse) were considered binary variables and presented as proportions. Pathological stage, pT stage, pN stage, pM stage and smoking status were considered multiple categorical variables and shown as proportions. Age was deemed to be continuous variable and reported in the form of a median (range). Gene expression level from TCGA database, NR1H3 △Ct, NR2F6 △Ct were also deemed to be continuous variables. The higher the △Ct value, the lower the gene expression level. NR1H3 △Ct and NR2F6 △Ct were calculated using equations below [22]:

Clinical characteristics of patients in TCGA and FUSCC database

In TCGA cohort, the median age of patients with muscle-invasive bladder cancer was 70.0 years old, ranging from 38 to 90 years old. In this database, 224 patients were male (72.7%) while 84 patients were female (27.3%). Information of TNM stage, tumor subtype, family history, smoking status and so on was recorded in Table 1. The median follow-up time was 14.5 months and 115 patients died during follow-up.

In FUSCC database, the median age of 123 patients who underwent radical cystectomy was 61.0 years old, with a range from 25 to 78 years old. One hundred and three patients were men (83.7%) while twenty patients were women (16.3%). Records of TNM stage, adjuvant chemotherapy information, histological grade and patient catalog were also presented in Table 1, along with comparison of clinical characteristics between TCGA and FUSCC cohort. The median follow-up time in FUSCC cohort was 53.1 months and 42 people died. 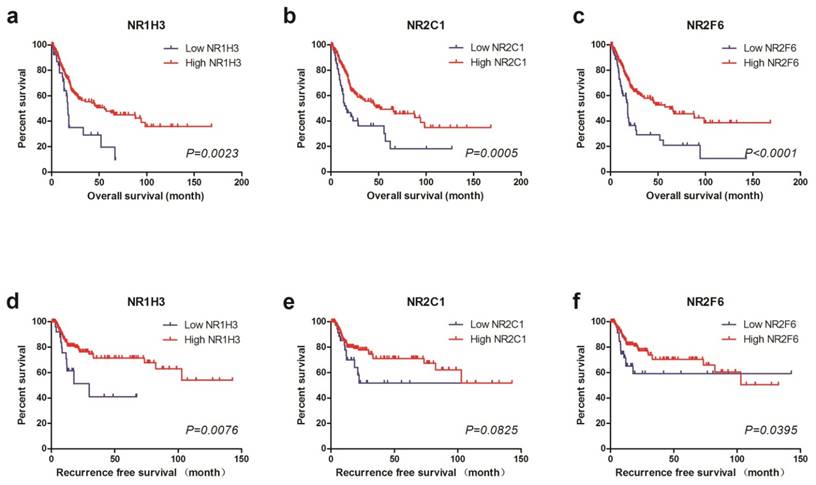 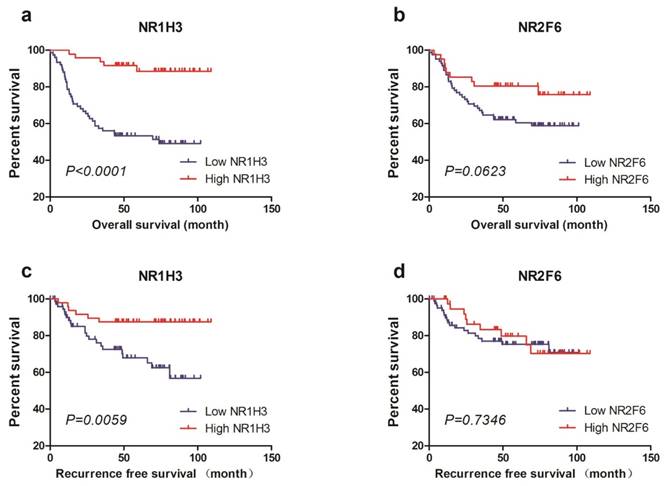 a. Binary variable: No lymph node involvement versus otherwise

a. Binary variable: No lymph node involvement versus otherwise

In our study, we were the first to demonstrate that NR superfamily gene expression was correlated with prognosis of patients with MIBC, in both OS and RFS. In TCGA filtrating cohort, we found that low NR1H3, NR2C1 and NR2F6 expressions were independent factors of poor OS, while only low NR1H3 and NR2F6 expressions had the ability to predict poor prognosis for RFS. Further, in our FUSCC validating cohort, we confirmed that low NR1H3 expression level was independent factor of poor OS and it had the ability to predict poor RFS. However, NR2F6 failed to maintain statistical significance in predicting prognosis of both OS and RFS.

Nuclear receptors are one of the largest classes of transcription factors and regulate many cellular functions through manipulation of gene expression [23]. They play important roles in many physiological and pathological processes [24]. Liver X receptor alpha (LXRα) is a nuclear receptor encoded by NR1H3 gene, and forms a subfamily of the NR superfamily along with liver X receptor β. Previously understood, LXRα was a key regulator of macrophage function [25] and lipid homeostasis [26-28]. But recent researches revealed that LXRα was associated with various cancer types. Savic D et al found that activation of LXRα could inhibit colorectal cancer cell proliferation and decrease glutathione levels, consistent with increased cellular oxidative stress [29, 30]. In breast cancer, some researchers declared that NR1H3 was likely to be an onco-suppressor gene [31, 32]. Similar results were also achieved in prostate cancer [33], gallbladder cancer [34], ovarian carcinoma [35] and so on. All the publications mentioned above illustrated that NR1H3 might be an onco-suppressor gene in various cancer types, which was in line with the unfavorable prognosis in MIBC patients with low NR1H3 expression level found in our investigation.

LXRs were closely related to cholesterol metabolism in cancer. LXR activation was absolutely a hot-spot in cancer research and was a potential bona fide therapeutic strategy. As reported, tumor-related proliferation status was associated with enhanced cholesterol requirement which is satisfied not only by up regulating de novo biosynthesis but also by increasing cholesterol uptake via LDLR. Furthermore, in cancer cells, despite the intracellular cholesterol abundance, LXR transcriptome was also down regulated [36]. In most studies, LXR activation promoted cholesterol removal from cells by increasing expression of membrane transporters ABCA1, ABCG5, ABCG8 and ABCG1 [37], and inhibited uptake via LDLR by inducing IDOL-mediated LDLR degradation [38], to inhibit cancer cell proliferation. Besides, some groups reported that activation of LXR can play an anti-tumor role through other mechanisms, like altering microenvironment by activating marcophages [39], disrupting key growth pathways by suppressing β-catenin signaling [40] or activating apoptotic processes through caspase pathway [41]. Overall, LXRs play important role in tumor suppression through various mechanisms. Our study was the first to link LXRα to prognosis of MIBC and casted a new light in therapeutic potential of LXRα in MIBC.

A major strength of this study is that our data was got from two large populations with a relatively long follow-up, but there are certainly some limitations. Firstly, the limitations include the retrospective nature of this study and the selected bias of patients in FUSCC cohort, which from a single cancer center. Secondly, the prognosis of MIBC is affected by many factors, such as tumor stage, surgical performance, response to adjuvant chemotherapy and genetic background, so a single biological biomarker is not enough. Thirdly, qRT-PCR technique only measures the mRNA expression level of certain gene, not referring to protein level. So in the future, we will expand our cohort to multicenter cohorts for further validation, and perform immunohistochemistry or western blotting to measure protein expression level in tumor tissues. Furthermore, research in cell lines and deep molecular mechanism should be explored to make a step forward to potential application.

We wish to thank all our colleagues in the Department of Urology, Shanghai Cancer Center, without you, we could not have completed the work. This work is supported by Project 81502192 by the National Natural Science Foundation of China.

Junlong Wu and Fangning Wan acquired the data and drafted the manuscript, Haoyue Sheng and Guowen Lin analyzed and interpreted the data, Guohai Shi prepared all figures, Yijun Shen and Bo Dai edited all tables. Dingwei Ye and Yiping Zhu designed the study. All authors reviewed and approved the manuscript.