Methods: A total of 322 newly diagnosed NPC patients receiving intensity modulated radiotherapy (IMRT) in Sun Yat-sen University Cancer Center between June 2002 and August 2006 were enrolled. Kaplan-Meier methods and log-rank test were applied for survival analysis; a multiple regression was used to identify the factors related to weight loss during radiotherapy.

Nasopharyngeal carcinoma (NPC) is an epithelial malignancy distinguished from other head and neck cancers and prevalent in Southeast Asia, the Mediterranean basin, and South China [1]. In recent years, with the increased application of intensity modulated radiotherapy (IMRT), which optimizes the radiation deposition in the tumor while sparing the adjacent normal structures, the 3 year local control rates of NPC has reached above 90% [2-6]. However, the process of IMRT will still bring miserable suffering to NPC patient. A critical weight loss is a very common symptom during IMRT. In a prospective study from northern China, 56% of 159 NPC patients had a more than 5% weight loss during radiotherapy, the median weight loss was 6.9 kg [7]. Weight loss, which refers to malnutrition and cancer cachexia, may negatively affect patients' response to treatment, sense of well-being, health-related quality of life (HRQOL), and increase the risk of infections and treatment toxicities [8-11]. In our previous studies, we had confirmed that critical weight loss during radiotherapy was a poor prognostic factor for NPC patients. Some general clinical characteristics were found to be related to weight loss during radiotherapy, such as tumor stage, pretreatment body weight, pretreatment body mass index (BMI), and karnofsky performance status (KPS) [12-14]. However, these previous analyses, taking only general clinical characteristics into consideration, had not investigated the impact of radiotherapy-induced acute radiation toxicities on weight loss. As we know, acute radiation toxicity, like mucositis, dysgeusia, xerostomia, nausea and vomiting, which may cause systemic inflammatory and feed decreased, was always been considered to be main cause of weight loss during radiotherapy [15-18]. So, in this study, through evaluating acute radiation toxicities for 322 NPC patients receiving radical IMRT, we aimed to fully investigate the potential influence factors of weight loss during radiotherapy.

The retrospective study enrolled 418 newly diagnosed NPC patients that involved curative treatment with IMRT with or without concurrent chemotherapy in Sun Yat-sen University Cancer Center between June 2002 and August 2006. The routine workup included a complete physical examination, hematologic and biochemistry profiles, fiberoptic endoscope examination of the nasopharynx, magnetic resonance imaging, or contrast-enhanced computed tomography of the head and neck to accurately evaluate the primary tumor and regional lymph nodes. Chest radiography, bone scintigraphy, and ultrasonography of the abdominal region were used to exclude distant metastases. All the patients were restaged according to the 6th edition of Union for International Cancer Control /American Joint Committee on Cancer (UICC/AJCC).

All patients were scanned from the vertex to the clavicles with serial 3-mm slices before radiotherapy. Inverse IMRT planning was performed using the Corvus system, version 3.0 (Peacock, Nomos, Deer Park, IL), meanwhile, a MiMi multileaf collimator (Nomos, Sewickly, PA) was used for planning and treatment. The prescribed dose was 68 Gy to the planning tumor volume (PTV) of the gross tumor volume(GTV), 60 Gy to the PTV of the first clinical tumor volume (CTV-1), 54 Gy to the PTV of the CTV-2, and 64-66 Gy to the PTV of the GTV for the involved cervical lymph nodes in 30-31 fractions. Chemotherapy consisted of cisplatinum (DDP) and 5-fluorouracil (5-FU). DDP 80∼100 mg/m2 bolus injection was delivered on day 1 and 5-FU 500∼1000 mg/m2 was administered by 120-hour continuous infusion daily, day 1 through day 5 for 5 days. During radiotherapy, the patients kept their regular meals. Feeding tubes were used for 5 patients who were unable to eat. Parenteral nutrition was not a routine nutritional support in this population.

Measuring of weight loss during radiotherapy

For each NPC patient during radiotherapy, we recorded detailed radiation-induced tissue changes at least once a week into the patient's progress note. At the end of radiotherapy, an evaluation score table was used to grade the worst toxicities according to the Acute Radiation Morbidity Scoring Criteria of the Radiation Therapy Oncology Group (RTOG). The target tissues mainly included skin, mucosal, salivary gland, pharynx and esophagus, larynx, eye, ear, and upper gastrointestinal. The severity of toxicities is graded from 0-4 (0 - absence of radiation effects; 5 - effects led to death) [19]. All toxicities Grade 3, 4, 5 were verified by principal investigator to ensure the reliability of the evaluation.

After completion of radiotherapy, patients were followed up every 3 months for the first 3 years by clinic visits, telephone, letter and so on. The intervals gradually increased from 6 months to 1 year after 3 years.

SPSS version 13.0 was used for data processing. To investigate whether weight loss (%) had an impact on prognosis, a receiver operating characteristic (ROC) curve was used to determine the best threshold value for weight loss (%) which would be predictive of mortality. The best threshold was the minimal distance to the ideal point (sensitivity = specificity = 100%) on the ROC curve. It provided a criterion for choosing the “optimal” threshold value, the threshold value for which Se(c) + Sp(c) - 1 is maximized [20], then all the patients were divided into two groups according the best threshold value. Survivial comparisons between the two groups were analyzed by Kaplan-Meier methods and log-rank test. Bivariate analyses were performed to examine the associations between weight loss and other clinical factors, and a multiple regression analysis was performed to identify the factors that were independently related to weight loss during radiotherapy. Independent influence factors of weight loss were identified by a Cox proportional hazards model. All statistical tests were two-sided, and p < 0.05 was considered statistically significant.

Weight loss (%) during radiotherapy of the 322 nasopharyngeal carcinoma patients 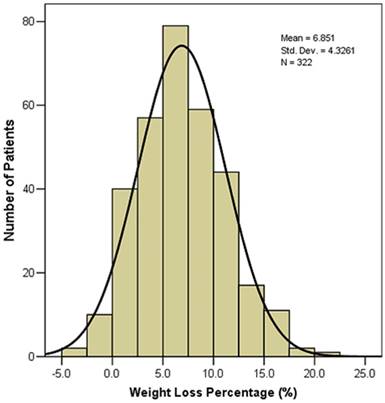 The factors associated with weight loss during radiotherapy

Relationships between baseline clinical factors and weight loss (%) during radiotherapy

* Variables were categorized according to the median.

Correlations between weight loss (%) and acute radiation toxicities during radiotherapy

The population of 322 NPC patients had a satisfied long-term prognosis, with 5-year OS rates 84% and 5-year LRFS rates 93%, the result was better than the data from the NPC patients receiving conventional radiotherapy or 3-dimensional conformal radiation therapy (3DCRT) [21-23]. Consistent with the results of we reported before, the mean weight loss (kg) was 4.0 kg, and the mean value and median value of weight loss (%) were 6.85% and 6.70% in these patients receiving IMRT [12,13]. In the survival analysis, we defined critical weight loss as body weight loss of > 5.4 %, based on the result of ROC analysis for mortality. Patients with critical weight loss had poorer OS and DMFS than those patients without critical weight loss. As we know, a critical weight loss during IMRT, which involving a great quantity of nutrition deletion in a short time, was reported to be correlated with metabolic abnormalities, increased risk of infections, reduction of treatment tolerance, and early mortality [24,25]. On the other hand, according to the newest definition of cancer cachexia, which defined cachexia as weight loss greater than 5%, or weight loss greater than 2% in individuals already showing depletion according to current bodyweight and height (body-mass index [BMI] <20 kg/m2) or skeletal muscle mass (sarcopenia) [26], 225 (70.0%) patients in our study had cancer cachexia during their IMRT course. To best of our knowledge, cancer cachexia was related to malnutrition and a number of clinical consequences, including decreased response to treatment, increased treatment toxicity, and deteriorated quality of life [27-29]. Therefore, we should pay more attention to the commonly observed but frequently undervalued weight loss during radiotherapy for NPC patient.

* The model explained 21% of the variance in weight loss (%) during radiotherapy.

* The model explained 16% of the variance in weight loss (%) during radiotherapy.

The causes of weight loss during radiotherapy were widely explored in both our previous studies and the others' studies. Lønbro et al. had reported that pretreatment BMI and tumor stage could predict critical weight loss during radiotherapy for head and neck patients [30]. Zhao et al. had reviewed twenty-two studies involving 6159 head and neck patients and found 3 predictors for weight loss: advanced tumor stage, a higher pretreatment BMI, and the use of concurrent chemoradiotherapy [31]. However, none of these previous studies had investigated the influence of acute radiation toxicities on weight loss, which refers to oral mucositis, swallowing disorders, xerostomia and so on [32]. As a result, to fully investigate the influence factors for weight loss, we had collected both the patients' general clinical characteristics and their acute radiation toxicities information. Our final multivariate analysis had showed that pre-RT weight, acute mucosal toxicity, acute pharynx and esophagus toxicity, and acute upper gastrointestinal toxicity had significant and independent impact on weight loss during IMRT. As far as we know, this study is the first systematic report about the influence of acute radiation toxicities on weight loss for NPC patients.