The Albumin-to-Alkaline Phosphatase Ratio (AAPR) has been recently revealed as a prognostic index for hepatocellular carcinoma, whereas its role in metastatic nasopharyngeal cancer (NPC) remains unclear. The aim of this study was to evaluate the clinical value of AAPR in patients with metastatic NPC. We retrospectively reviewed 209 metastatic NPC patients treated with cisplatin-based regimens. Survival data were calculated using the Kaplan-Meier method and were compared using the log-rank test. Univariate and multivariate survival analyses were conducted using the Cox proportional hazards regression methodology. The optimal cutoff level of AAPR for assessing overall survival (OS) was 0.447, which was determined by R software. An AAPR less than 0.447 was significantly associated with a higher lactate dehydrogenase (LDH) level (273 vs. 185 U/L, P = 0.004), a higher EBV DNA viral load (5.59×105 vs. 3.49×104 copies/ml, P = 0.001), and more liver and bone metastases (P = 0.005 and P = 0.001, respectively). Additionally, patients with an AAPR < 0.447 had a shorter overall survival and progression-free survival (hazard ratio: 3.269, 95% confidence interval: 1.710-6.248; HR: 2.295, 95% confidence interval: 1.217-4.331, respectively) than those with an AAPR ≥ 0.447. Our study suggested that the AAPR might be a novel prognostic factor in metastatic NPC patients treated with cisplatin-based regimens. However, a prospective study to validate its prognostic value is needed, and the mechanisms underlying the low AAPR and poor survival in metastatic NPC need to be further investigated.

Nasopharyngeal carcinoma (NPC) is a highly malignant neoplasm with a very unique pattern of geographical distribution, with nearly 70% of new cases occurring in east and southeast Asia.1 Recently, with the advance of radiotherapy and chemotherapy, this disease has been considered a curable disease, with a 5-year overall survival (OS) exceeding 75%. However, more than 20% of patients will ultimately develop distant metastasis after definite chemoradiotherapy. Meanwhile, 5-6% of NPC patients are identified as having disseminated disease at initial diagnosis.2 Under this condition, systematic therapy remains the primary option. A number of treatment options for metastatic NPC have shown great success, especially cisplatin-based regimens, which have been used as first-line chemotherapies with an overall response rate of 50-80%.3 However, a significant heterogeneity of treatment outcomes has been observed; thus, the discovery of biological markers, which can conveniently predict survival to assist with clinical decision-making, is still an important topic in metastatic NPC.

Several staging systems and various serum markers have been investigated to provide prognostic information, including the TNM staging system, Epstein-Barr virus (EBV) DNA viral load, C-reactive protein, lactate dehydrogenase (LDH), albumin (ALB) and alkaline phosphatase (ALP).4-9 Some combined indexes of clinical characteristics and laboratory biomarkers have also been proven to be prognostic factors, such as the C-reactive protein-to-albumin ratio, neutrophil-to-lymphocyte ratio (NLR) and monocyte-to-lymphocyte ratio (MLR).10-11 However, the albumin-to-alkaline phosphatase ratio (AAPR), which is a novel prognostic factor for hepatocellular carcinoma (HCC), has not yet been studied in metastatic NPC patients.12 Therefore, it is of interest to determine whether AAPR can also be applied to metastatic NPC.

Thus, we conducted a retrospective cohort study aimed at examining the role of AAPR in the prognosis for metastatic NPC patients treated with cisplatin-based therapy. Additionally, we also investigated the relationship between AAPR and other clinical characteristics.

We reviewed patients with metastatic NPC in Sun Yat-sen University Cancer Center from 2008 to 2011. The inclusion criteria were as follows: (1) pathologically confirmed NPC at our cancer center; (2) clinically diagnosed metastasis; (3) complete baseline comprehensive metabolic panel data, especially albumin and alkaline levels; (4) cisplatin-based chemotherapy regimens as first-line treatment; (5) Karnofsky Performance Score (KPS) greater than 60; (6) normal hepatic and renal function; (7) complete follow-up data; (8) available informed consent for the collection of medical information. The exclusion criteria were as follows: (1) clinically diagnosed brain metastases; (2) concurrent malignancies. A total of 209 patients with metastatic NPC between 2008 and 2011 were included in this analysis, and all of them were initially treated with cisplatin-based regimens. All of the procedures conducted in this study were in accordance with the ethical standards of the institutional research committee and with the 1964 Helsinki Declaration and its amendments. Additionally, the study protocol was approved by the ethics committee of Sun Yat-sen University Cancer Center.

Baseline clinical and laboratory assessments, including complete blood count, comprehensive metabolic panel with LDH, ALB and ALP, EBV-DNA viral load, and dedicated MRI of the nasopharynx and CT scans of the chest or PET-CT, were retrieved and reviewed from the hospital database. The AAPR was calculated by dividing the serum albumin level by the serum alkaline level. Clinical staging of the tumors was performed according to the AJCC TNM staging system (7th edition, 2010).

Overall survival (OS) was measured from the initial diagnosis to death due to any cause or the most recent follow-up. Progression-free survival (PFS) was measured from the initial diagnosis to disease progression or death from any cause. Our final follow-up was on January 31, 2016. The optimal cutoff level of AAPR was determined by a web-based system, R software, designed by Budczied et al.13 Baseline characteristics were compared using Chi-squared test or Fisher's exact test. Survival data were calculated using the Kaplan-Meier method and were compared using the log-rank test. Univariate and multivariate survival analyses were conducted using the Cox proportional hazards regression methodology. Hazard ratios (HRs) with 95% confidence intervals (CIs) and two-sided P values were reported. A P value < 0.05 was considered to be statistically significant. All of the statistical analyses were performed using the Statistical Package for the Social Sciences version 19.0 (IBM, Armonk, NY, USA).

Univariate and multivariate analyses of the prognostic factors of overall survival for metastatic nasopharyngeal carcinoma patients. 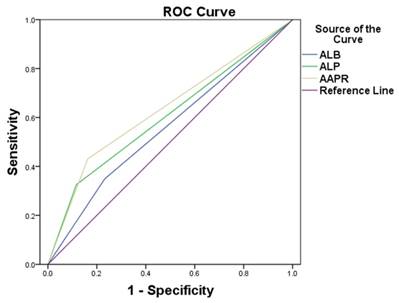 ALB, the most abundant serum protein, is considered a nutritional index with the ability to stabilize cell growth and DNA replication, buffer various biochemical changes, and exert antioxidant effects against carcinogens.14 In addition, malnutrition, which is reflected by low ALB, can weaken human defense mechanisms such as cellular and humoral immunity and phagocytic function, leading to the increasing possibility of infection and the poor response to anti-cancer treatment.15 Recently, ALB has become a popular biomarker for the prediction of survival in various malignancies, including colorectal cancer, osteosarcoma, hepatocellular carcinoma, renal cell carcinoma and prostate cancer.16--20 Li et al. reported that NPC patients with a pretreatment ALB level less than 43 g/L had a poor prognosis. The underlying mechanisms included malnutrition and an imbalanced tumor microenvironment. A high concentration of interleukin 6 (IL-6) and tumor necrosis factor (TNF) can modulate the production of albumin in hepatocytes and increase the permeability of the microvasculature.21 Furthermore, EBV, a well-known prognostic factor in NPC regardless of stage, has the ability to stimulate the release of pro-inflammatory cytokines, including IL-6 and TNF, which pathologically intensifies these processes.22

Alkaline phosphatase (ALP) is a hydrolase enzyme that can dephosphorylate various types of molecules, including nucleotides, proteins and alkaloids.23 Although almost all tissues throughout the entire body contain this enzyme, it is specifically concentrated in the bone, liver, bile duct, kidney and placenta.24 More ALP will be released into the blood stream during some pathological conditions, including pregnancy, hepatocellular carcinoma, kidney disease and bone metastasis.25-28 Particularly, elevated ALP is frequently reported in bone metastasis in certain malignancies, including osteosarcoma, breast cancer and prostate cancer.20,29-30 Jin et al reported that serum ALP predicted a worse survival outcome in patients with skeletal and/or liver metastasis of NPC.31

Anthony and colleagues first proposed the concept of the AAPR and proved that the AAPR was an independent prognostic factor for overall survival and disease-free survival for patients with hepatocellular carcinoma receiving curative surgery.12 Additionally, we hypothesized that merging ALB and ALP into a new index may have a novel prognostic value and better predicted the survival of patients with metastatic NPC. In our study, a 0.447 cut-off value for AAPR was adopted to predict the survival in metastatic NPC patients. Both univariate analysis and multivariate analysis showed that an AAPR less than 0.447 is associated with poor prognosis and a high EBV DNA viral load. A low AAPR may reflect the patient's malnutrition status, impressed immunity, and relatively severe disease condition such as liver or bone metastasis; a high EBV DNA viral load may lead to imbalanced immunity in the tumor microenvironment as previously reported, which may promote tumor growth, invasion and metastasis. The AAPR is a combination of these predictors of adverse outcomes, which may enhance its prognostic value; besides, we found the AAPR had a higher AUC value than those of ALP and ALB. Thus, it is reasonable that the AAPR is a superior predictor factor of survival compared to other factors of nutrition or inflammation, like ALB and ALP. Considering the toxicities of intensive regimens and similar efficacy of TP/PF/TPF regimens, it is recommended that TP or PF may be a better choice for low-AAPR-value patients.

Generally speaking, there were several advantages in our study. First, we investigated the prognostic value of AAPR in metastatic NPC and its correlation with other clinical factors, which had not been reported in previous publications. Second, all of the enrolled patients were treated with cisplatin-based regimens, which, to a large extent, minimized the potential influence from the variation of different treatment modalities. Third, the AAPR can be easily and objectively calculated from a comprehensive metabolic panel. Finally, the AAPR as a continuous index showed a better predictive value than the simple addition of albumin and ALP.

The limitations of this study should be acknowledged. First, this is a retrospective and single-center study; no independent cohorts were introduced to confirm the prognostic value of AAPR. Second, the optimal cutoff for AAPR also requires external validation. Third, whether the dynamic change in the AAPR during the treatment course can predict the prognosis remains unknown. Future prospective clinical trials and basic research can emphasize and uncover the value and mechanisms regarding the AAPR.

The current study indicates that the AAPR is a prognostic index for metastatic NPC patients treated with cisplatin-based palliative chemotherapy. In addition, a prospective study to validate its prognostic value is warranted. The mechanisms underlying the close relationship between a lower AAPR and inferior survival in metastatic NPC need to be further investigated.