The UGT1A1*28 polymorphism was suggested to be significantly connected with irinotecan-induced toxicity and response to chemotherapy. However, the results of previous studies are controversial. Hence we carried out a meta-analysis to investigate the effect of UGT1A1*28 polymorphism on severe diarrhea, neutropenia, and response of patients who had undergone irinotecan-based chemotherapy. The PubMed, Web of Science, Wanfang, and CNKI databases were searched for clinical trials assessing the association of UGT1A1*28 polymorphism with severe diarrhea, neutropenia, and response to irinotecan-based chemotherapy. The combined odds ratios (ORs) and 95% confidence intervals (CIs) were used to evaluate the relationship under a fixed- or random-effects model. Fifty-eight studies including 6087 patients with cancer were included. Our results showed that patients carrying the TA6/7 and TA7/7 genotypes had a greater prevalence of diarrhea and neutropenia than those with the TA6/6 genotype (TA6/7+TA7/7 vs. TA6/6: diarrhea, OR = 2.18, 95%CI = 1.68-2.83; neutropenia, OR = 2.15, 95%CI = 1.71-2.70), particularly patients with metastatic colorectal cancer. Stratified analysis showed that Asians with the TA6/7 and TA7/7 genotypes were more likely to have diarrhea and neutropenia, and Caucasians with the TA6/7 and TA7/7 genotypes were more likely to have neutropenia than other groups. However, patients with the TA6/7+TA7/7 genotypes showed a higher response than patients with TA6/6 genotype (OR = 1.20, 95%CI = 1.07-1.34), particularly Caucasians (OR = 1.23, 95%CI = 1.06-1.42) and patients with metastatic colorectal cancer (OR = 1.24, 95%CI = 1.05-1.48). Our data showed that the UGT1A1*28 polymorphism had a significant relationship with toxicity and response to irinotecan-based chemotherapy. This polymorphism may be useful as a monitoring index for cancer patients receiving irinotecan-based chemotherapy.

According to the estimation, there are probably 1,658,370 people suffer from cancer and 589,430 people die of cancer in the United States in 2015[1]. In China, the corresponding data were 4,292,000 and 2,814,000 in 2015, respectively, which means cancer is an urgent problem to be solved [2]. Several methods such as surgery, radiotherapy, and chemotherapy are widely applied for the clinical treatment of cancer. Irinotecan-based chemotherapy is one of the most used chemotherapies for patients with advanced gastric cancer, ovarian cancer, metastatic colorectal cancer, and other cancers [3-5]. Irinotecan, a camptothecin derivative, is mainly transported into liver by solute carriers and metabolized into ametabolite, SN-38, by a carboxylesterase [6]. In turn, SN-38 is glucuronidated by uridinediphosphate (UDP)-glucuronosyltransferases (UGTs) to an inactive form, SN-38G. Lower glucuronidation rates lead to higher SN-38 concentrations, resulting in irinotecan-induced severe toxicity [7]. Diarrhea and neutropenia are the most common side effects of irinotecan-based chemotherapy, limiting its application [8]. Recent studies have confirmed thatUDP UGT 1A1 play a vital role in the process of glucuronidation [9, 10].

The UGT1A1*28 polymorphism contains an extra TA repeat in the 5′-promoter region, whose mutant genotype is A(TA)7TAA (TA7/7) and has a wide genotype of A(TA)6TAA (TA6/6). Toffoli et al.[11] found that UGT1A1*28 TA7/TA7 genotype is related to a lower glucuronidation ratio. Previous studies investigated the relationship of UGT1A1*28 with neutropenia and diarrhea and have shown conflicting results. TA6/6 was reported to be a main predictive factor for diarrhea in a study of 56 advanced colorectal carcinoma (CRC) [12]. In contrast, some studies found that patients with the TA6/7 or TA7/7 genotypes are more inclined to suffer severe neutropenia and diarrhea [13-16]. However, no correlation was defined between the UGT1A1*28 polymorphism and neutropenia according to data from Hirata et al.[17] and Ferraldeschi et al.[18].

Studies were included if they fulfilled the following criteria: (a) clinical trials; (b) evaluated the association of the UGT1A1*28 polymorphism with irinotecan-induced toxicities and chemotherapeutic effect; and (c) contained key information about the number of patients who have severe diarrhea, neutropenia and response to chemotherapy or not. Duplicate studies, review articles, letters, non-original studies, or case reports were excluded.

Detailed information of included studies had been extracted and recorded in a standardized table by two reviewers. The following information was recorded: first author's surname, year of publication, ethnicity, cancer subtype, methods of mutation detection, number of patients with and without response, severe diarrhea and neutropenia, genotypes were extracted. If these data were not reported, items were marked “NR” (not reported).

This meta-analysis was conducted according to the PRISMA guidelines [19]. We used the Newcastle-Ottawa-Scale (NOS) to assess the qualities of including studies and calculated the combined odd ratios (ORs) and 95% confidence intervals (CIs) to evaluate the strength of relationship between the UGT1A1*28 polymorphism and irinotecan-induced diarrhea or neutropenia under the four models (TA6/7 vs. TA6/6, TA7/7 vs. TA6/6, TA6/7+TA7/7 vs. TA6/6, and TA7/7 vs. TA6/6+TA6/7) [20]. The association between tumor response and the UGT1A1*28 polymorphism was calculated only in the dominant model (TA6/7+TA7/7 vs. TA6/6). Pooled ORs were tested by the Z test, and a P value <0.05 was considered significant. Chi-square test and Q test were used to examine the heterogeneity among the studies. We also performed stratified analysis depending on tumor types (advanced gastric cancer, metastatic non-small cell lung cancer, metastatic colorectal cancer, or others), ethnicity (Asian, Caucasian or mixed people) and study design (retrospective or prospective study). Publication bias were determined by Egger's and Begg's tests [21, 22]. Specific methods are described in our pervious study [23]. A trim and fill method of adjusting for publication bias was carried out when the P value of Egger's test was less than 0.05 [24]. Trial sequential analysis (TSA) was conducted to calculate the required sample size to get a robust conclusion [20]. When P values of two-sided comparisons were less than 0.05, we considered the difference was significant. We performed all the statistical calculations by STATA 12.0 (StataCorp LP, College Station, TX, USA).

Characteristics of the Studies Included

As shown in Figure 1, we performed the primary literature retrieval using the PubMed, Web of Science, Wanfang, and CNKI databases by the end of June 2016. First, 307 articles were included and 119 articles were excluded after searching for duplicates. Second, we read the titles and abstracts and excluded 78 articles because they were letters, case reports, reviews or reporting about other polymorphisms. Finally, after reading the full-text of all articles, 53 articles were excluded due to lacking of useful data or evaluation about other toxicities and 58 studies from 57 articles including 6087 patients with cancer were found to meet the inclusion criteria. 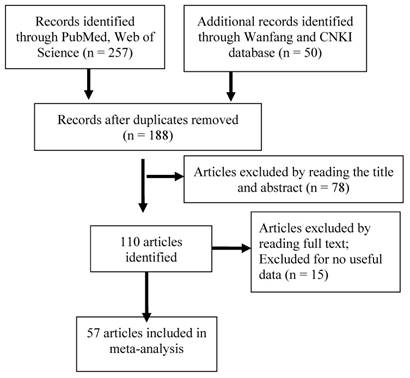 Characteristics of the Studies Included in the Meta-Analysis

Forest plot of diarrhea risk related to UGT1A1*28 polymorphism under the homozygous model. 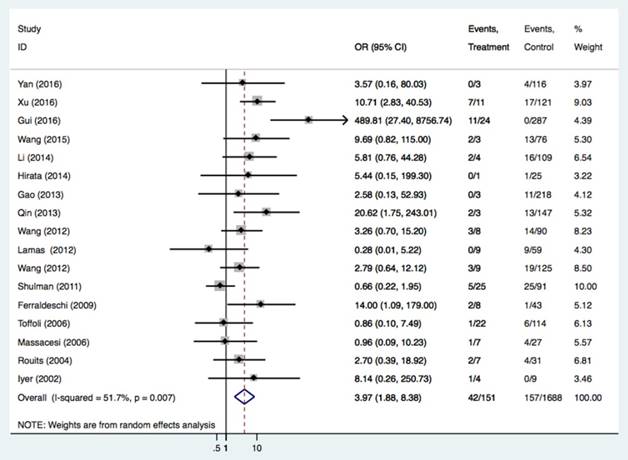 Meta-Analysis of UGT1A1*28 Polymorphism and Response

There was high heterogeneity among studies evaluating severe diarrhea under the homozygous and recessive comparisons (TA7/7 vs. TA6/6: P = 0.007, I2= 51.7%; TA7/7 vs. TA6/6+TA6/7: P<0.001, I2= 57.6%). We performed meta-regression to explore the sources of heterogeneity. The data indicated that ethnicity and year of publication accounted for 76% and 26% of heterogeneity under the homozygous model and 54% and 41% under the recessive model, respectively (data not shown). There was high heterogeneity among studies of neutropenia under recessive comparison (P<0.001, I2= 60.7%). The meta-regression results only revealed that the number of patients represented 25% of the heterogeneity and no other factors were found (data not shown).

Forest plot of neutropenia risk related to UGT1A1*28 polymorphism under the homozygous model. 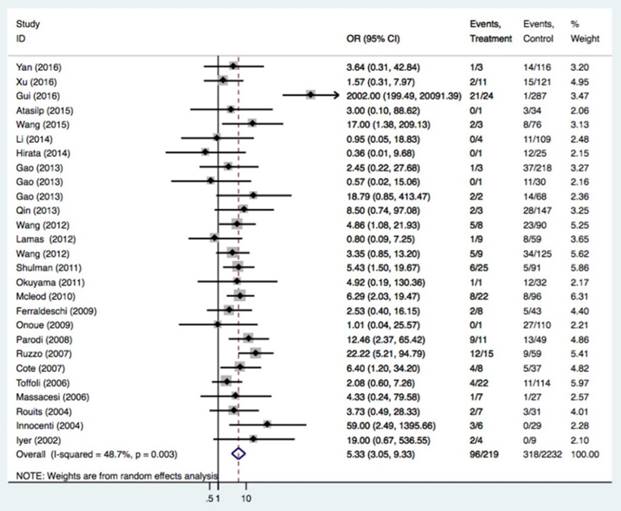 Forest plot of response related to UGT1A1*28 polymorphism under the homozygous model. 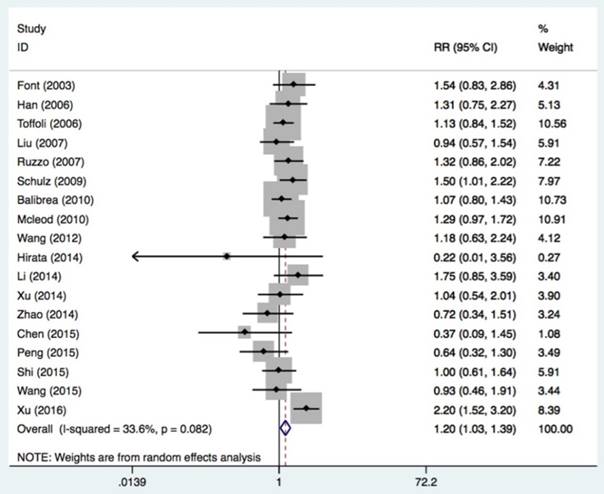 P values for Begg's funnel plot and Egger's test for diarrhea and neutropenia.

Statistical analysis was conducted as described previously [23]. As shown in Figure 5, 6, and 7, the results were not affected by omitting individual studies in this meta-analysis, indicating that our results are reliable.

We used the dominant model as an example to perform the TSA, which included eighteen trials with 2024 patients. The results showed the required information size was 1078, which meant our sample size was enough to get a robust conclusion about the UGT1A1*28 polymorphism and chemotherapy response (Figure 8). The required sample sizes for determining the associations between UGT1A1 and diarrhea and neutropenia under the dominant model were 763 and 1162, respectively (data were not shown).

Sensitivity analysis of the studies about diarrhea under the homozygous model. 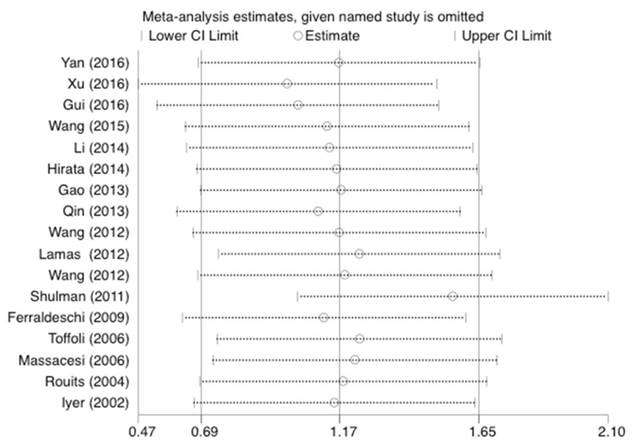 Sensitivity analysis of the studies about neutropenia under the homozygous model. 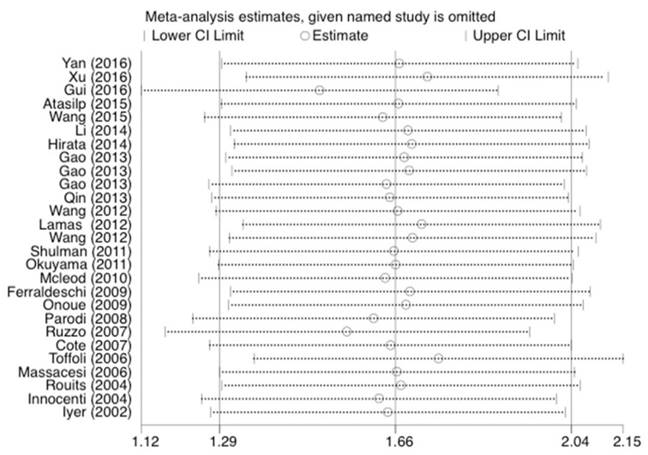 Sensitivity analysis of the studies about response under the dominant model. 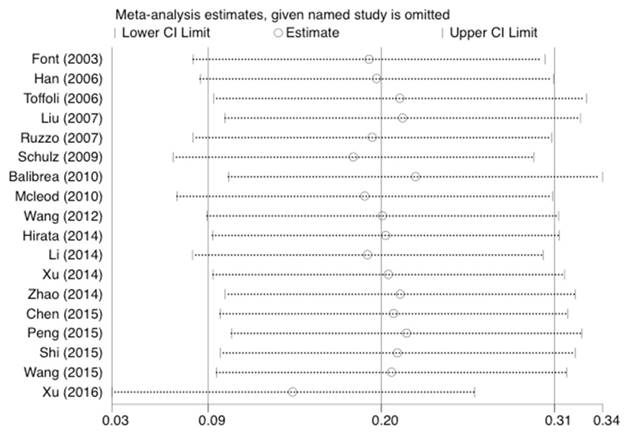 The required sample size to demonstrate the relationship between UGT11A1*28 polymorphism and chemotherapy response. The solid line represents the cumulative z-curve. The dashed curve represents the trial sequential monitoring boundary. 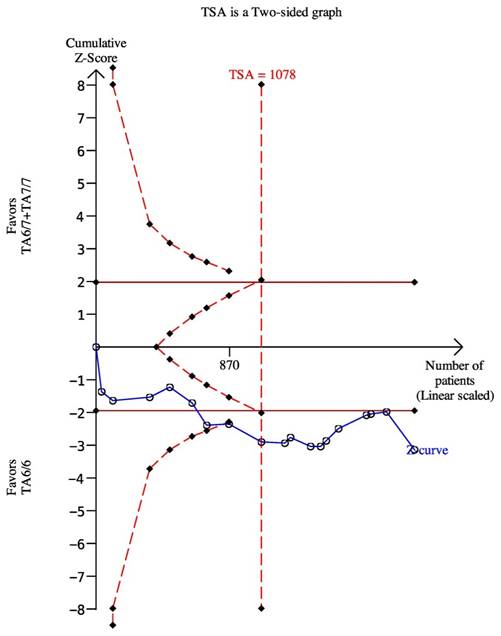 Patients evaluated in this study, particularly mCRC patients with the TA6/7 and TA7/7 genotypes, may have severe diarrhea and neutropenia after irinotecan-induced chemotherapy. However, the UGT1A1*28 TA6/6 and TA7/7 genotypes may show an increased treatment response according to our results. In contrast to our results, Xu et al.[67] observed different clinical responses in Ugyur patients with different UGT1A1*28 polymorphism genotypes, but not in the Han population. Although the reduction of irinotecan was greater in patients with the TA7/7 or TA6/7 genotypes than the TA6/6 genotype, no difference in overall or progression-free survival between the two group patients were found by Dias et al.[68]. These results indicate that if the patients with mutant genotypes could tolerate the toxicities, irinotecan-based chemotherapy is a good choice for treatment. Additional studies of the treatment response should be carried out.

Previous meta-analyses included few than 20 studies and only focused on toxicities or chemotherapy response. In comparison with these studies, we included more research (58 studies) and investigated the associations of UGT1A1*28 polymorphism with toxicities and chemotherapy effect. We also got a novel conclusion that patients with a higher risk of chemotherapy toxicities have a tendency to better response to chemotherapy. However, there were some limitations to our study. First, the number of studies of SCLC, mNSCLC, advanced GC, solid tumors, and other cancers were limited, and thus, larger sample sizes for a single tumor are needed to validate our results. Second, high heterogeneity existed among studies related to severe neutropenia under the recessive comparison. Although the number of patients could explain 25% of the heterogeneity, other influencing factors were not identified. Third, the studies we including selected different irinotecan doses in the chemotherapies, which may lead to some bias.

11. Toffoli G, Cecchin E, Corona G, Russo A, Buonadonna A, D'Andrea M. et al. The role of UGT1A1*28 polymorphism in the pharmacodynamics and pharmacokinetics of irinotecan in patients with metastatic colorectal cancer. Journal of clinical oncology: official journal of the American Society of Clinical Oncology. 2006;24:3061-8